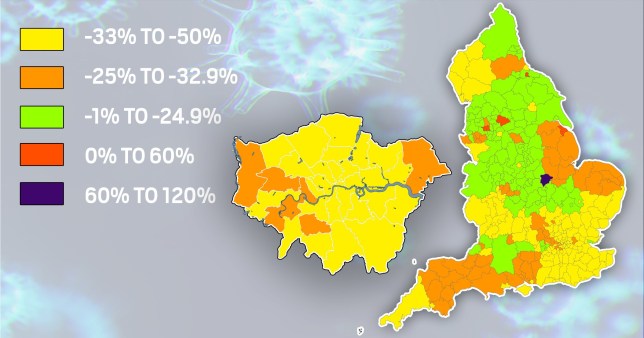 Map shows the percentage change in infection rates across England and London, for the week ending February 7, 2021 (Picture: Metro.co.uk)

The latest data from Public Health England shows 96% of areas across the country have experienced a drop in case rates.

And a number of those places – particularly across London and the South East – have seen a fall in infection rates of up to 50%. But the majority of areas appear to have seen a drop of up to 25%.

These figures, which are for the week leading up to February 7, look at the number of new cases per 100,000 people to calculate the infection rate.

Only 12 areas have seen a rise in case rates – with most increases only in the single figures.

But Rutland in the East Midlands continues to have the highest infection rate in England, with 186 new cases recorded and a rate of 466.

The surge has been blamed on an outbreak at HMP Stockten, with local MP Alicia Kearns claiming ‘around half’ of the new cases in the county were in the prison.

Director of public health for Leicestershire County Council and Rutland, Mike Sandys, said the area’s small population of just under 40,000 residents meant its infection rate was more susceptible to spikes. 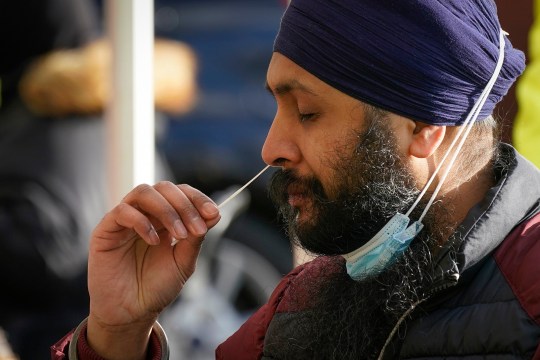 A number of areas across England – particularly across London and the South East – have seen a fall in infection rates of up to 50% (Picture: Getty Images)

The 12 areas where Covid-19 infection rates are increasing

The percentage increases have been calculated by Metro.co.uk based on information published by Public Health England on the Government’s coronavirus dashboard on February 11.

Other areas where cases are rising include Calderdale, Mid Devon and Ryedale in North Yorkshire.

Devon’s public health chief, Steve Brown, said he was ‘concerned’ about the amount of cases coming out of work places and urged people to continue to follow lockdown rules.

It comes as Boris Johnson revealed earlier this week that one in four adults in England have received a first dose of a Covid-19 vaccine.

The Government is aiming to vaccinate around 15 million people in the top four priority groups by mid-February – including over 80s and frontline NHS workers – and it will become clear next week whether that target has been met.

The PM said the country had made ‘great strides’ in the vaccination roll-out, with first doses given to over 13 million people as of Wednesday.

Mr Johnson told a Downing Street press conference: ‘With less than a week to go until the target date of Monday 15, there’s no doubt we have made great strides with just over 13 million people now vaccinated in the UK, including one in four adults in England, over 90% of everyone over 75 and over 90% of eligible residents of care homes for the elderly.

‘But that still leaves nearly 2 million people – a population roughly twice the size of Birmingham – that we still hope to reach. And there are people across the country who, for one reason or another, haven’t yet taken up their offer.’