The cause of a huge fire near a nudist beach in Dorset has been revealed to be a disposable barbecue.

Some stores stopped selling the popular summer item amid warnings of the ‘tinderbox’ state of much of the country’s fields and parks.

Wildfires have sparked across the UK as this year’s second heatwave continues.

Before temperatures spiked, fire chiefs had pleaded with the public not to use disposable barbecues.

Yesterday, a fire spread in a nature reserve near to Knoll Beach on Dorset’s Studland peninsula – and involved 90 firefighters at its height.

A chain ferry at the millionaire’s resort of Sandbanks, which carries tourists to Studland, was closed and visitors evacuated from the beauty spot while the fire was tackled.

The blaze caused traffic chaos and affected an area of almost ten acres, with huge plumes of smoke seen for up to 15 miles.

Early investigations by the fire service suggest a barbecue was the cause of the fire.


Huge plumes of smoke could be seen from miles away (Picture: AP)

#LatestNews 1/2 We have been called to reports that more than 300 cars have ignored the councilâs no parking signs in Ferry Road, Studland.
The restrictions are in place because the water hose is running along the road to allow firefighters to deal with the large heath fire there

A spokesman for Dorset and Wiltshire Fire Rescue Service said: ‘Our crews have done a great job at a variety of fires including Studland. I have absolute confidence in our crews but what we could really do with is help from the public.

‘Amazingly, someone took a barbecue to Studland, that’s what started this fire and we need help from the public to stop these fires starting in the first place.

‘The message is “don’t take barbecues out”. We really need to not start anything because it’s really hard for our crews to get it under control.’

Dorset Police are meanwhile battling to stop people from accessing a car park by the beach, after 300 drivers ignored council signs indicating its closure.

It was closed due to a hosepipe running across a nearby road. 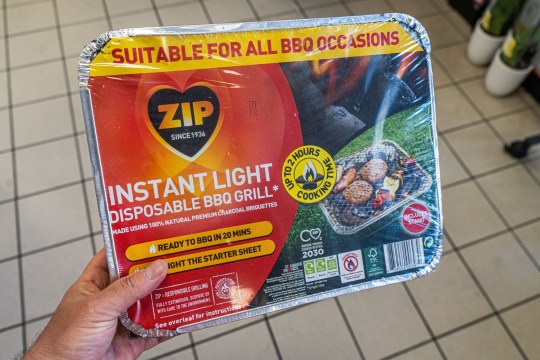 There have been calls to clamp down on where sells the items (Picture: Amer Ghazzal/Shutterstock) 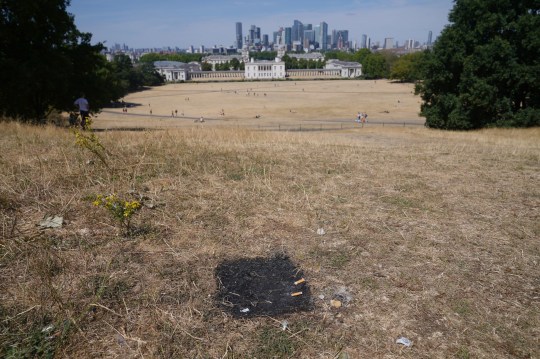 A scorched mark left behind by a disposable barbeque in Greenwich Park, London (Picture: PA)

Wildfires have sparked throughout the UK as high temperatures continue.

In Essex, 16 crews dealt with a massive fire that covered 370,000 square meters of land.

Houses were evacuated as the fierce flames spread.

Meanwhile in London, dramatic photos showed the scale of a blaze at Hollow Ponds in Leytonstone.

Firefighters were tasked with fighting back against huge flames that had spread over the dry field on Thursday. 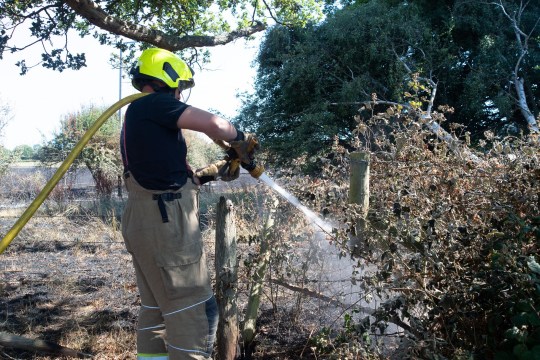 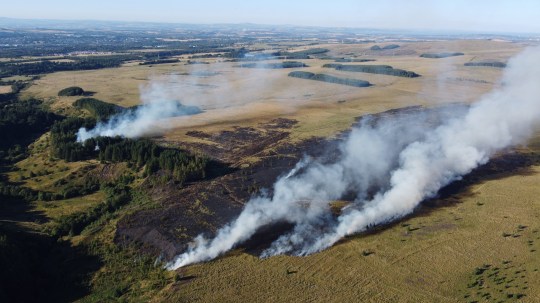 And in Yorkshire, firefighters had teamed up with local farmers to battle a similar blaze which had spread through a field in the Aldborough St John area the night before.

Further north still, in Scotland, crews were this morning still battling to contain a moorland fire after it had raged for three days.

Rain will soon hit most of Scotland and Northern Ireland amid predictions of a ‘small chance’ of flooding and a risk of power blackouts.

A lower-level yellow warning for thunderstorms is in place from noon on Sunday until 6am on Monday for swathes of the two countries.

But higher temperatures in England will take longer to dissipate.

Announcing an official drought for parts of England, Water Minister Steve Double said: ‘We are currently experiencing a second heatwave after what was the driest July on record for parts of the country. Action is already being taken by the Government and other partners including the Environment Agency to manage the impacts.

‘All water companies have reassured us that essential supplies are still safe, and we have made it clear it is their duty to maintain those supplies.

‘We are better prepared than ever before for periods of dry weather, but we will continue to closely monitor the situation, including impacts on farmers and the environment, and take further action as needed.’

John Curtin, executive director for local operations at the group said after Britain sweltering through its driest summer in 50 years, it would take ‘weeks’ worth of rain’ to replenish water sources.

The announcement could lead to millions more households being hit with hosepipe bans, but the EA has insisted essential water supplies are safe.