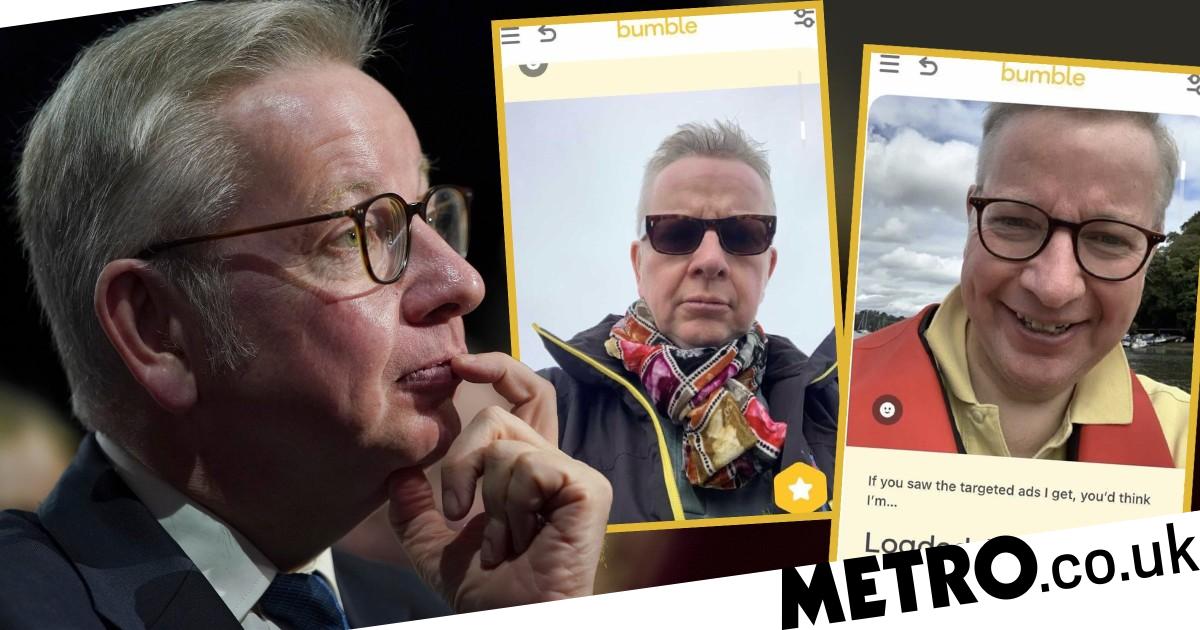 A profile that appears to belong to the Tory minister Michael Gove has appeared on Bumble (Picture: AP / Bumble)

Not content with tearing up the dancefloors of Manchester, Michael Gove – or someone pretending to be him – appears to have turned to dating app Bumble to woo the singletons at Tory party conference.

A profile purporting to belong to that of the Government’s levelling up minister has been spotted in the city while Mr Gove was in town.

It features several selfies of the senior Tory as well as a few choice insights into his life following his separation from wife Sarah Vine.

His basic info includes his height (6’00”), his star sign (Virgo) and his enjoyment of social drinking and smoking.

One picture shows Gove playing bowls and in another he rocks a jazzy scarf and sunglasses.

‘If you saw the targeted ads I get, you’d think I was…’ the app prompts to which he’s responded with: ‘Loaded, but sadly that isn’t true.’

The Guido Fawkes website reported that one curious woman on Bumble matched with the minister and asked him to prove it was him by holding a copy of that day’s newspaper in a photo – which he did. 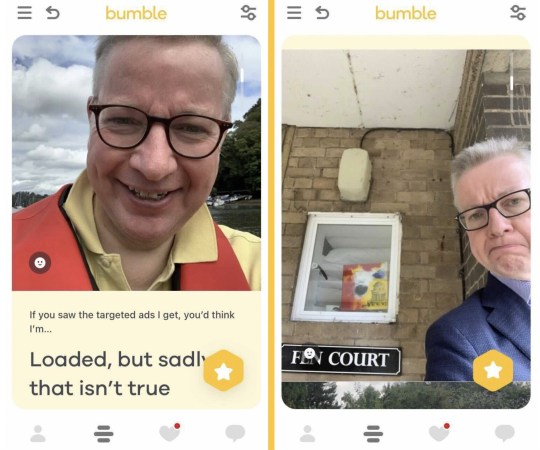 Mr Gove shows off a strong selection of selfies in his profile (Picture: Bumble)

Another person who spotted him on Bumble told Joe: ‘I was very surprised to see Michael Gove on Bumble, at first I thought it was a fake but then I noticed that his profile was verified and his location said he was in Manchester, which made sense when I realised that was where Tory conference was. I suppose even MPs need love.’

Mr Gove has thrown himself into single life after splitting from journalist Ms Vine after 20 years.

The couple announced in July that they were separating and were ‘in the process’ of finalising their divorce.

Dad-of-two Gove was spotted in a club in Aberdeen at 2am in the morning over the summer, throwing shapes reminiscent of Mr Bean.

He was back on the dancefloor in Manchester earlier this week, alongside colleague Tom Tugendhat where the pair showed off their moves to Whitney Houston’s I Wanna Dance With Somebody. 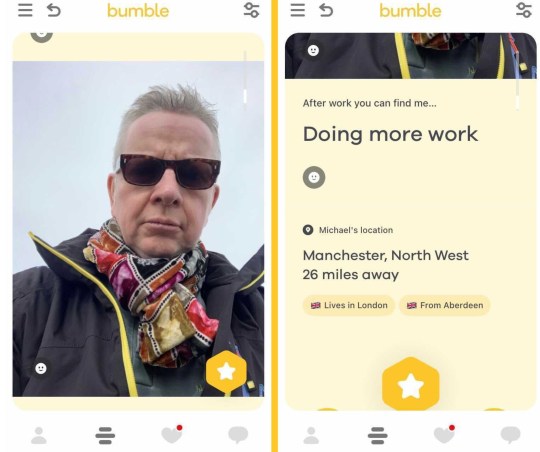 He comes across as a bit of a workaholic (Picture: Bumble)

His escapades earnt him a namecheck in Boris Johnson’s big speech on Wednesday afternoon.

The PM said his former rival was leading by example to show dancing was safe again after the lifting of coronavirus restrictions, adding: ‘Let’s hear it for Jon Bon Govey.’

Asked to analyse the profile purporting to be that of Mr Gove, dating expert Dr Elesha Vooght was not altogether positive.

She told Joe: ‘Michael has clearly tried to come across as nonchalant and amusing, but it reads as uptight. His questions give someone very little to work with. There is no opening for a conversation or a question.’

He didn’t get much love on Twitter either. ‘This will haunt me forever’, said one person.