MOORS Murder police officers have widened a search for victim Keith Bennett as it entered its sixth day.

A third blue tent has been put up and forensic officers were still combing the landscape today. 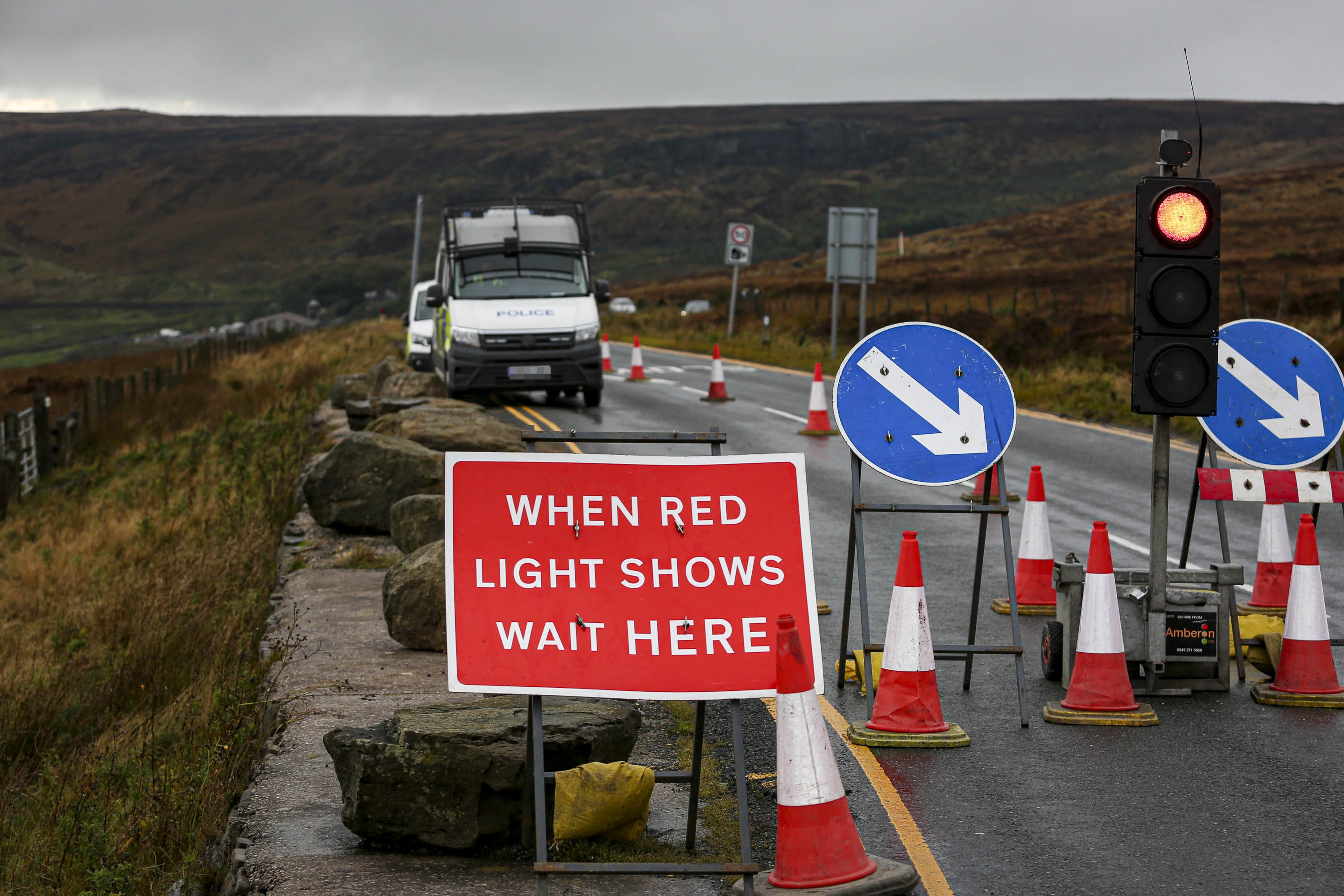 Temporary traffic lights have been installed on a stretch of road coned off for police vehiclesCredit: SWNS 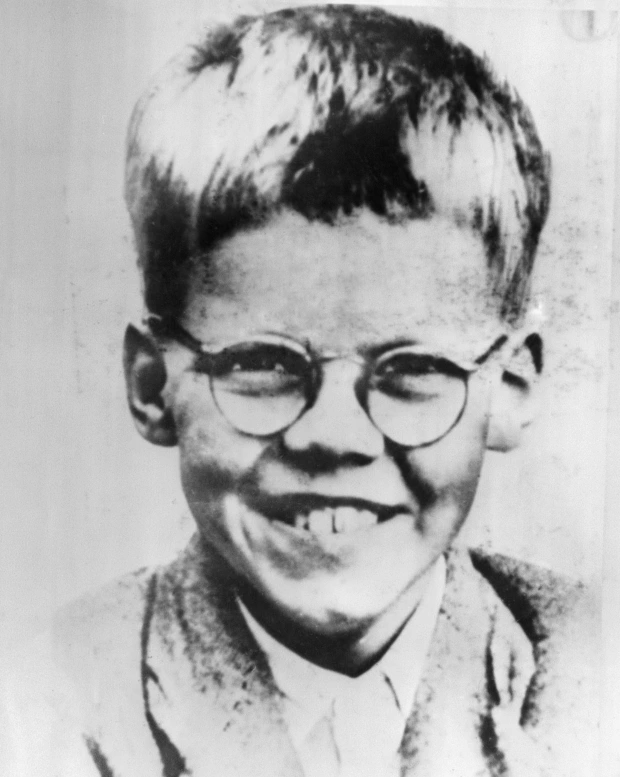 Keith Bennett was murdered in 1968 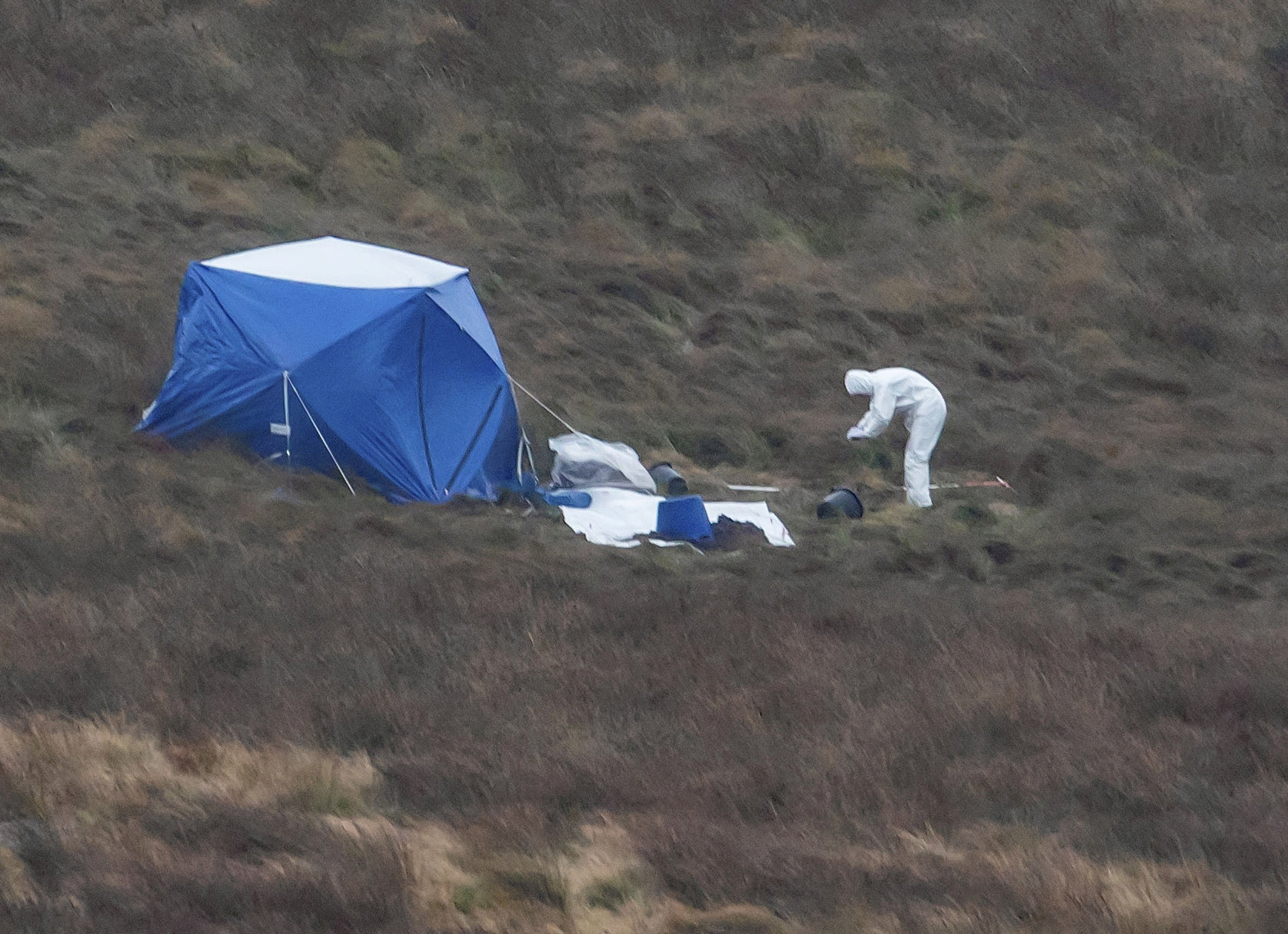 Police, pictured on the Moor on Friday, confirmed no remains have yet been foundCredit: SWNS

Yesterday police confirmed no human remains had yet been found during the dig.

And Keith’s family are still living in anguish as they hope he is found. Brother Alan previously wrote: “I cannot escape the feeling that we have been here before.”

Keith Bennett vanished 58 years ago aged 12 and is the only one of killer couple Ian Brady and Myra Hindley’s five victims still undiscovered. 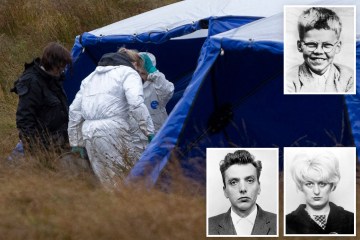 Three were found buried a few hundred yards from where author Russell Edwards believed he had found an upper jaw with a full set of teeth.

Forensic sample analysis of the find is also ongoing, and officers will try to identify other potential sites of interest on Saddleworth Moor.

She added: “Further soil samples have been taken for analysis, but at this time there is no visible evidence to suggest the presence of human remains. The scene examination is ongoing.

“A report of possible human remains is always treated with seriousness.”

Keith was last seen on June 16, 1964, when he left home to walk to his gran’s in Longsight, Manchester.

The 12-year-old was lured into a van by Hindley as Brady sat in the back seat, and driven to Saddleworth Moor, near Oldham, where he was killed and buried.

The child murderers were later branded by a judge as “sadistic killers of the utmost depravity”.

Mr Edwards, who is researching Keith’s murder and has been working with archaeologists in a bid to locate him, described his grim discovery on Thursday.

He said: “The smell hit me about 2ft down. Like a sewer, like ammonia. It was on my clothes. I stank of it. The soil reeked.

“I worked as a gravedigger when I was 19 and it hits you, that smell of death. It is distinctive.

“I was overjoyed. Then we found blue and white stripped material. Then I stopped. I put everything back as I found it.”

Mr Edwards went on: “This is about peace for Keith and closure for the ­family.”

Keith’s mum, Winnie Johnson, died in August 2012 without  knowing where her son was buried.

Solicitor John Ainley, who represented Winnie and Keith’s brother Alan, said: “My client is keeping an open mind on the latest report having regard to earlier such reports that have raised expectations but not resulted in finding Keith’s body. 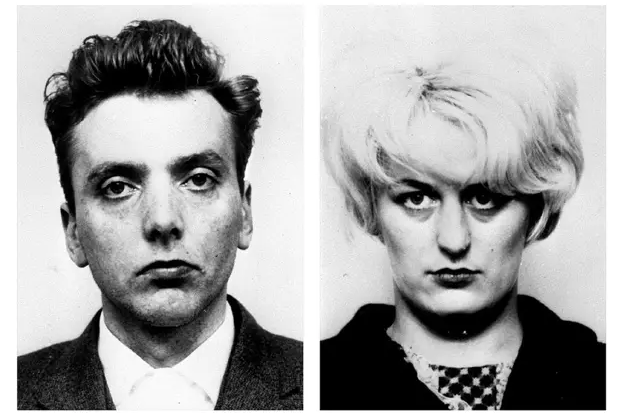 The twisted duo then embarked on a gruesome reign of terror that saw five children slaughtered.

Hindley would often lure the children in before driving them to Saddleworth Moor or the pair’s home.

Brady would then kill them often by throat slashing or strangling.

Four of the five victims were sexually assaulted as well as murdered.

They were also beaten, abused and gagged and made to pose for photographs.

The five victims were:

The reign of terror came to an end in 1965 when Brady invited Hindley’s brother-in-law and friend, David Smith, round to their home.

The monster then murdered Edward Evans – striking him fourteen times with a hatchet before finishing the job by strangling him – while Smith looked on in horror.

Under the pretence of helping them hide the body, Smith left and phoned the police next morning and directed them to Brady’s address.

On October 7, 1965, Superintendent Bob Talbot of the Cheshire Police arrived at the back door of 16 Wardle Brook Avenue and arrested the killer after discovering Edward’s body.

Over the course of the next few weeks, officers unearthed more evidence linking the couple to unsolved disappearances.

A huge search operation involving 150 officers was launched and on October 16, they found an arm bone sticking out of the ground belonging to Lesley Ann.

On June 30, 1987, the body of Pauline Reade was found buried 3 feet below the ground after Brady finally admitted to her murder.

“Naturally, the family are hoping that Keith has been found after all these years and their tireless efforts to find closure.

“I understand Greater Manchester Police are investigating a site of interest but that it will take some weeks to establish whether there is a connection with Keith.”

Glasgow-born Brady was sent to Manchester to live with his mum and new husband, Patrick Brady, after being raised by foster parents.

He became obsessed with Nazis, sadism and sexual perversion before meeting Hindley at work.

He impressed her reading Hitler’s Mein Kampf to her in German and the sick pair became inseparable.

On October 6,  1965, Brady killed fifth and final victim Edward Evans, 17,  in front of Mr Smith, hitting him 14 times with a hatchet before strangling him. Horrified Smith called police the next day.

In his statement to cops, he described the teenager’s killing.  He said: “Ian was standing over him, facing him, with his legs on either side of the young lad’s legs. The lad was still screaming. Ian had a hatchet in his hand. He was holding it above his head and he hit the lad on the left side of his head. 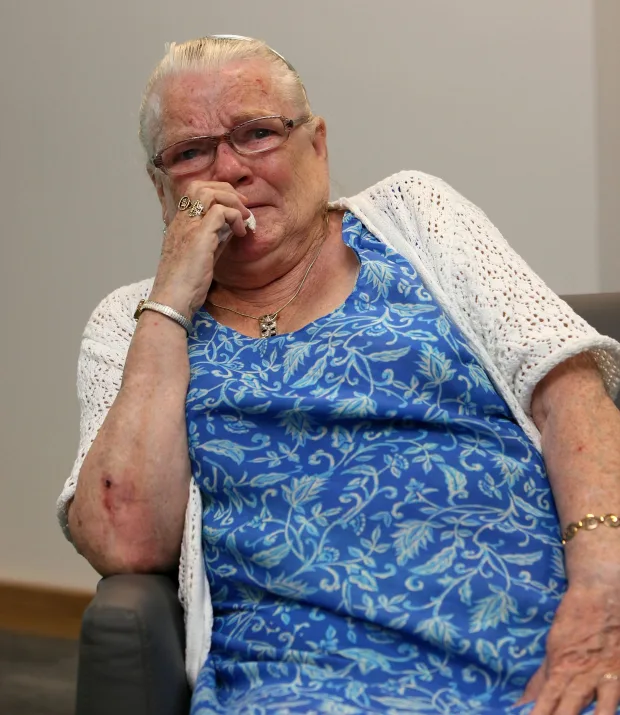 Keith’s mum Winnie died without ever finding her son 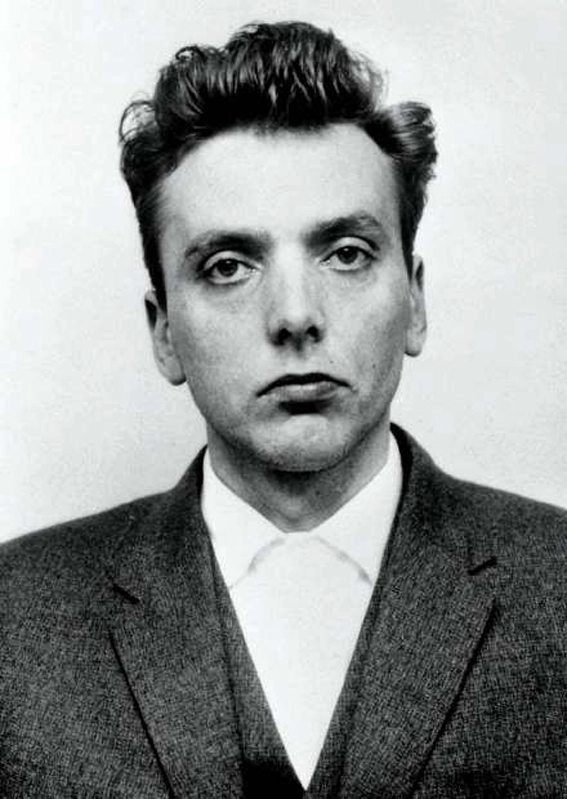 Sick Brady never revealed where he buried the body

“I heard the blow, it was a terrible hard blow, it sounded horrible.”

Supt Bob Talbot of Cheshire Police was the first officer to call at Brady’s home.

He met Hindley at the door and she and her lover allowed the police to look around. The spare bedroom door was locked. Brady told Hindley to hand over the key. When the door was opened Edward’s corpse was found, wrapped in plastic sheeting.

The murder weapon was also found, along with Brady’s collection of books on perversion and sadism.

After his arrest he admitted that he had fought with Edward but insisted Smith had helped him.

A few days later, police found tickets for two suitcases at ­Manchester Central Railway Station at Brady’s flat. Inside one were pictures of Lesley Ann naked with a scarf tied around her mouth and tapes of her pleading for her life.

Snapshots of Saddleworth Moor were also discovered. An exercise book with John Kilbride’s name scribbled in it led police to believe Brady and Hindley were involved in the unsolved disappearances.

A huge search operation involving 150 officers was launched and on October 16 they found an arm bone. It belonged to Lesley Ann.
Five days later they discovered the body of John Kilbride.

Mr Justice Atkinson described the murders as “truly horrible” and Brady as “wicked beyond belief”.

Brady got concurrent life terms on each count, while Hindley received two life terms plus seven years in the Kilbride case.

In 1985, Brady was transferred from prison to high security Ashworth Hospital in Merseyside.

He later admitted murdering  Keith and Pauline, whose remains were found after 100 days of searching on June 30, 1987. 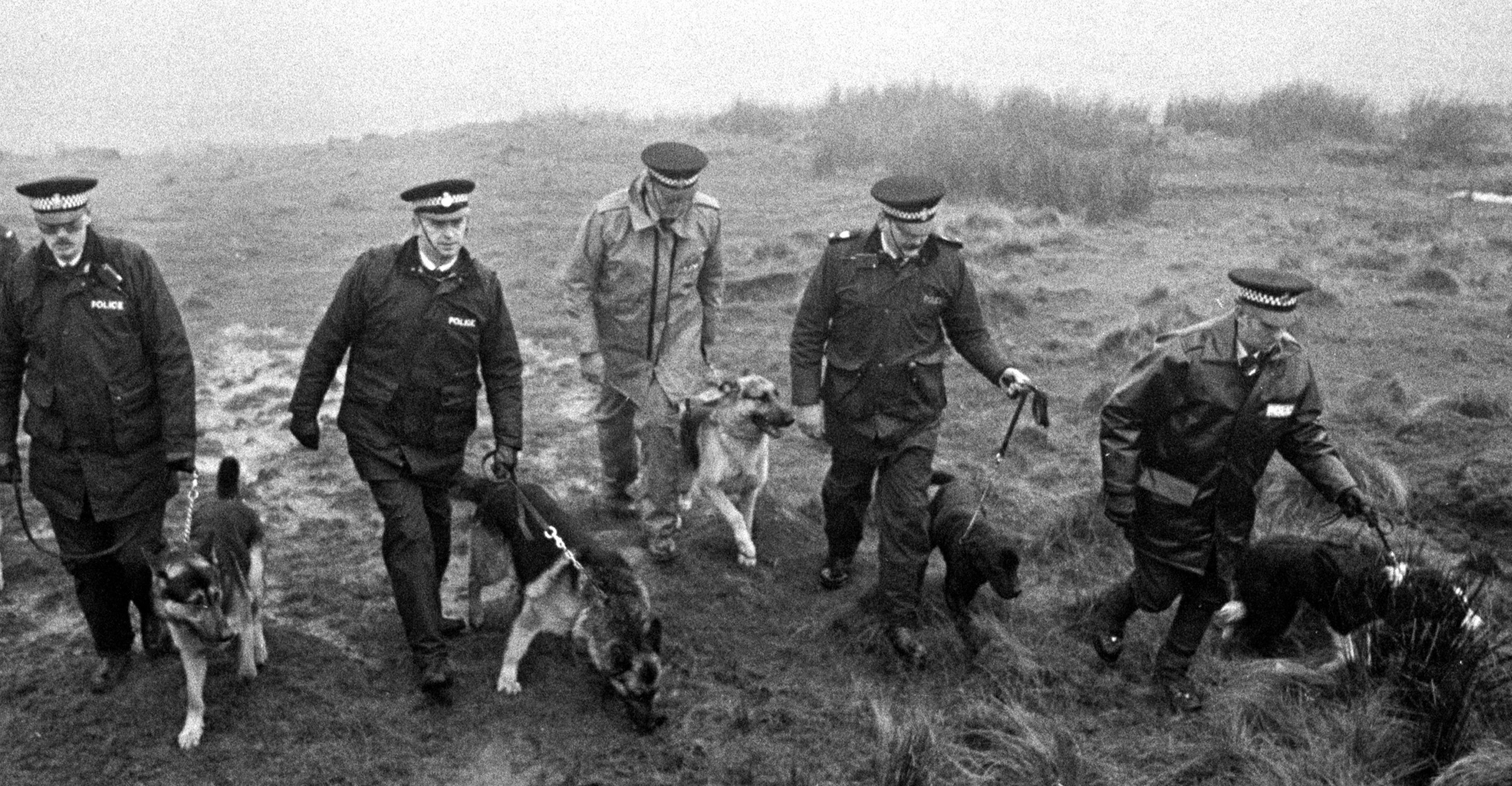 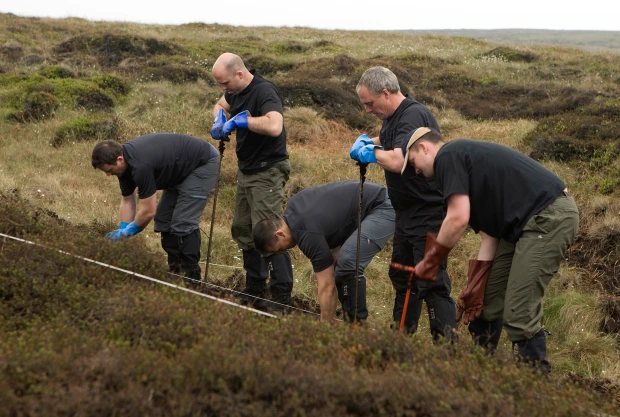 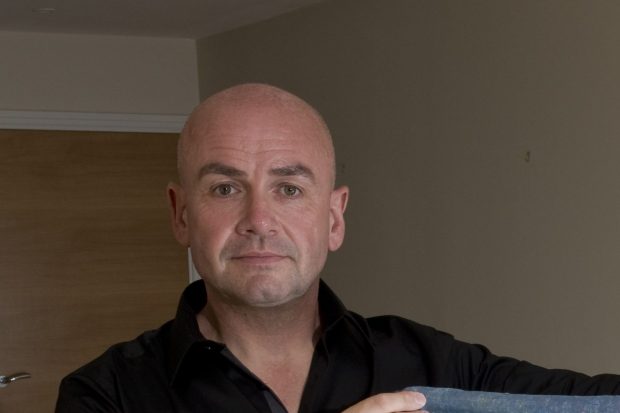 The property developer, whose first job was selling teddies, was moved when he read a 1987 newspaper article appealing for volunteers to help find twisted Brady and Hindley’s first victim, Pauline Reade.

The 58-year-old claims to have also “nailed 100 per cent” the identity of Jack the Ripper.

Russell’s fascination with the serial killer began after watching the Johnny Depp Ripper hit From Hell — about a police detective trying to solve the case.

He spent years researching the East End murders until a shawl he bought at auction “changed his life” forever.

In 2015 he published a book identifying Polish-born Aaron Kosminski as Jack the Ripper based on DNA extracted from the garment said to be found on one of his victims.

Later that year he set his sights on finding Keith Bennett.

He said: “It has been a lifelong obsession for me with big unsolved cases. I started delving into the story, what Brady’s fascinations were.

“You have got to live the story, sort of walk in their shoes to consider why the fascination with this area? What is so special about this area? It gave me the first clue.”

The dad of two, who grew up in Birkenhead on Merseyside, now lives in Hertfordshire with his wife and children, and is also a psychotherapist.

He told his 4,600 friends on Facebook yesterday: “Breaking news. It’s been a sincere honour to find Keith Bennett.”

MOORS murderer Ian Brady may have been aiming to create a ­swastika with victims’ burial sites, it has been claimed.

Russell Edwards, who spent seven years researching the killings, says evil Brady positioned remains of female victims on one side of the A635 and boys on the other to form a sick Nazi symbol.

He said: “The significance of the road is it looks like part of the swastika. It is his version of a ­swastika although he never got to finish it. There is half a zig-zag in the road and I thought it was significant to him.”

Police were using the theory to help find the last victim’s body.

It adds to existing evidence that Brady, who died aged 79, had a life-long fascination with the Third Reich.

He even used Hitler’s speeches to help him learn German during his imprisonment in Ashworth.

A welfare officer said: “He spoke of his interest in the German language then Hitler’s use of oratory and referred to his recordings of these, giving a bleak, cracked grin.”