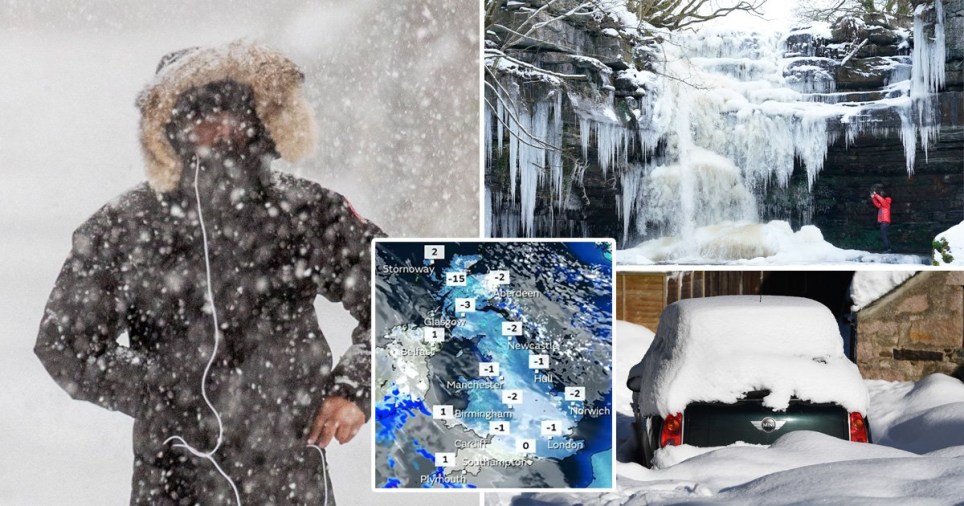 More snow is on its way this weekend (Picture: SWNS, PA, Getty)

The UK will be hit with more snow this weekend and bitter gales of up to 40mph as the cold snap continues.

The mercury was expected to drop to -15C in parts of central and northern Scotland in the early hours of Friday morning, while temperatures in England and Wales hover around -5C.

The Met Office said it was unlikely that any record low temperatures would be set in the coming days, with slightly milder temperatures expected over the weekend.

However, winds of up to 40mph are expected for south-west Wales, dropping to 20mph further inland throughout the day.

Mr Box said: ‘It’s going to be quite a windy day, which will add to the raw feel given the low maximum temperatures on Friday.’

Yellow weather warnings for snow and ice remain in place until midday on Friday for north-east England, central and north-east Scotland. 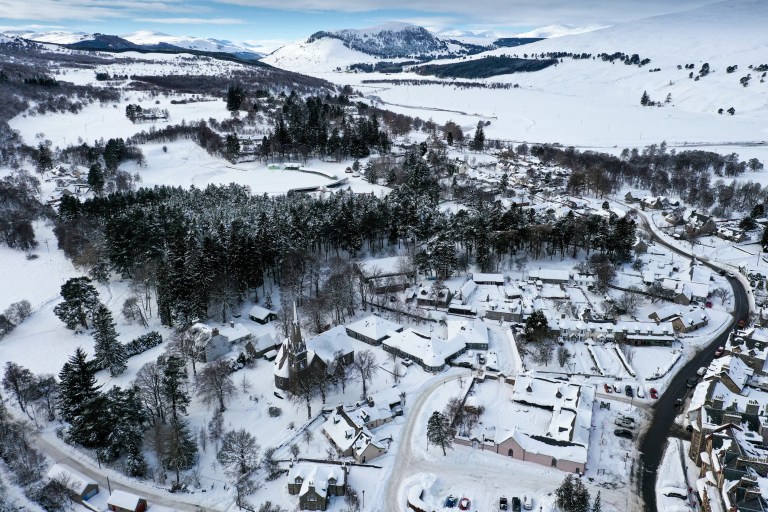 The village of Braemar in Scotland was covered in snow this week (Picture: Getty Images) 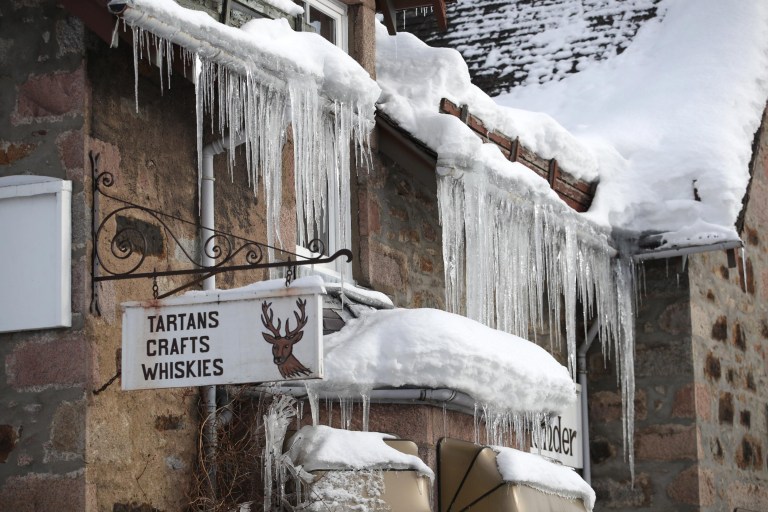 A similar weather alert for Cornwall, Devon, Plymouth and south-west Wales, warns of up 5cm of snow in some areas until 11am.

Snow and ice is forecast for Saturday, with yellow warnings in place for east and west Scotland, Northern Ireland and much of Wales until midnight.

It comes as The Met Office’s station in Braemar, Aberdeenshire, recorded a temperature of -23C on Wednesday night, the lowest in the UK since 1995. 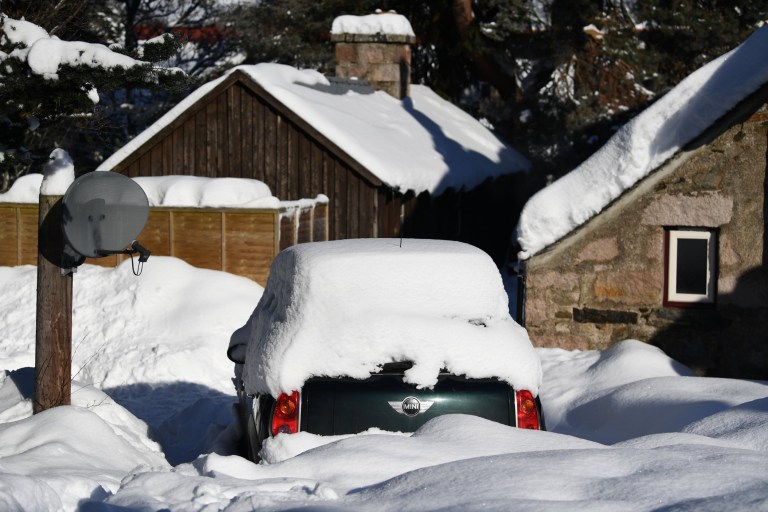 A car sits in a driveway covered by snow in Scotland (Picture: Getty Images) 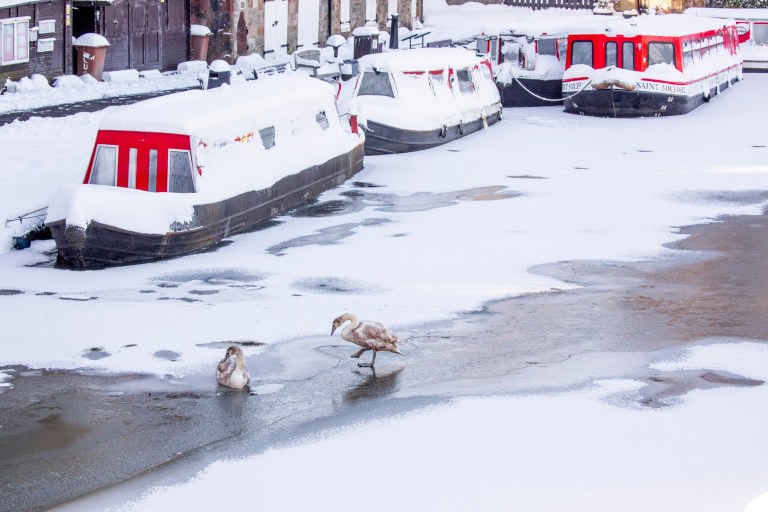 Cygnets on an iced-over Union Canal with snow-covered barges in Linlithgow (Picture: SWNS)

The ‘extreme freeze’ also saw the mercury plummet in areas in the Scottish Highlands, such as Kinbrace and Strathallan, to -21.3C and -18.2C respectively.

Oli Claydon, a spokesman for the Met Office, said that some of the records had been broken by ‘quite some way’.

Mr Claydon continued: ‘There’s still a couple of days of cold conditions to get through and a little bit more snow in parts of Scotland but the trend is that the weekend is going to herald a change to milder conditions.’ 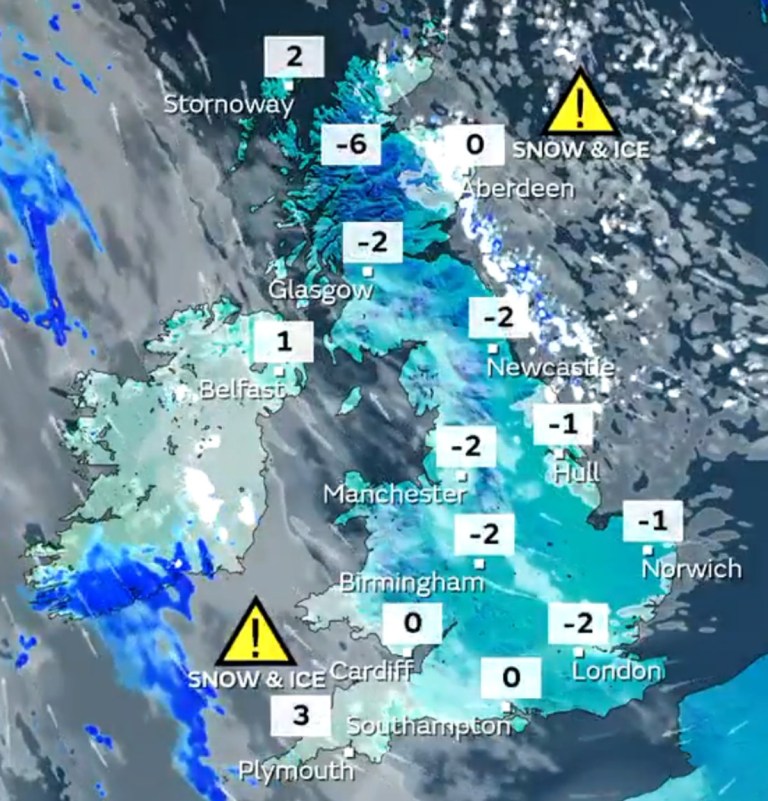 People have been warned of snow on Friday (Picture: Met Office) 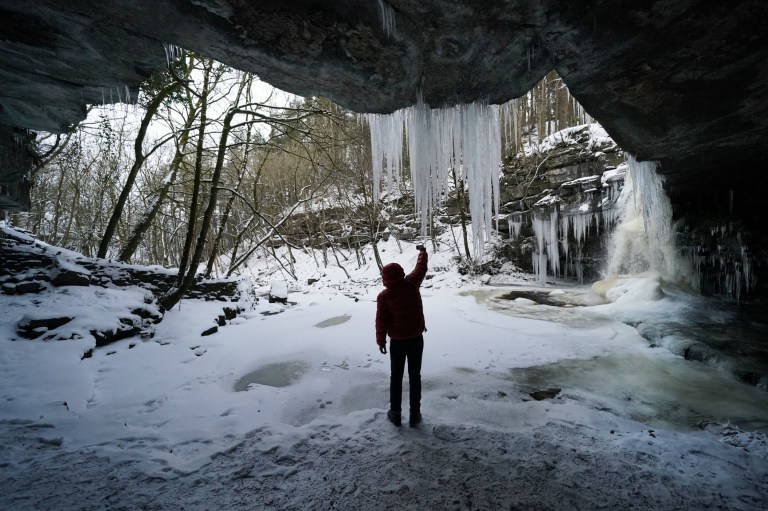 He warned that there was still a chance of freezing rain on Sunday and said the Met Office may issue a warning for ice, which would bring ‘significant hazards’.

It comes after councils across England urged people to take ‘extra care’ in the treacherous conditions and several were forced to briefly suspend waste collection services.

For more stories like this, check out our news page.