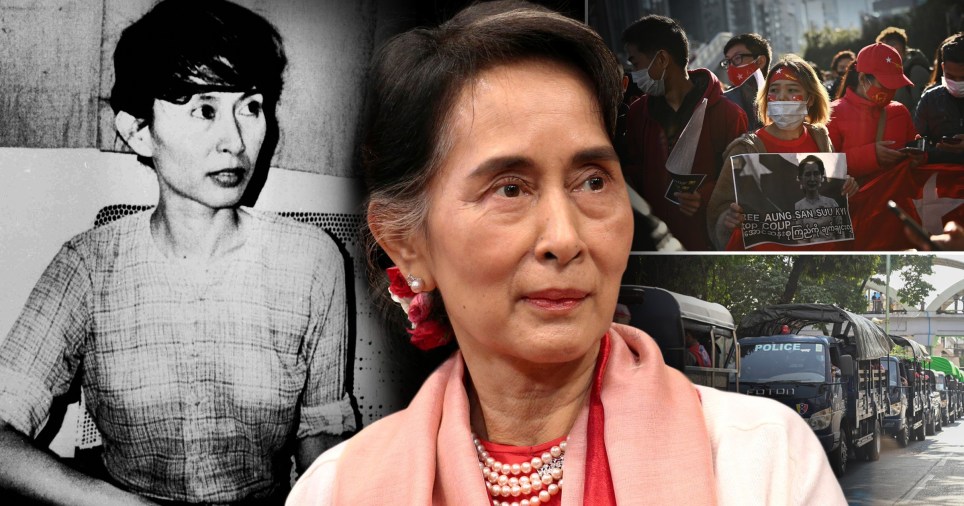 Aung San Suu Kyi is said to have been detained along with a host of other prominent figures in Myanmar (Picture: Reuters/AFP/Getty)

Myanmar’s leader is believed to have been detained in an apparent military coup which has seen communications cut in the capital city.

There has been international condemnation of the move in the south-east Asian country, where the military says it has taken control for at least a year.

State Counsellor Aung San Suu Kyi, a Nobel Peace Prize winner known for her part in the country’s transition to a partial democracy, has been placed under detention, according to various reports. Her ruling National League for Democracy party’s Central Executive Committee members, legislators and regional cabinet members were also taken into custody before dawn on Monday, the online news service The Irrawaddy reported. It added that the country’s president, Win Myint, had also been detained.

Phone and internet access to the capital Naypyitaw went down during the coup.

An announcer on military-owned Myawaddy TV declared the military had taken over on Monday morning, following days of concern about the threat of a coup as Myanmar’s new parliament session was about to begin.

Ms Suu Kyi, 75, is easily the country’s most prominent politician, and became its leader after heading a decades-long non-violent struggle against military rule.

The US, Australia and others have expressed grave concerns and urged the military in the country — previously known as Burma — to respect the rule of law.

‘The United States is alarmed by reports that the Burmese military has taken steps to undermine the country’s democratic transition, including the arrest of State Counselor Aung San Suu Kyi and other civilian officials in Burma,’ White House spokesperson Jen Psaki said in a statement from Washington.

She said President Joe Biden had been briefed on the reported developments.

The statement added: ‘The United States opposes any attempt to alter the outcome of recent elections or impede Myanmar’s democratic transition, and will take action against those responsible if these steps are not reversed.’

Australia called for the release of Ms Suu Kyi and others.

Foreign Minister Marise Payne said: ‘We strongly support the peaceful reconvening of the National Assembly, consistent with the results of the November 2020 general election.’ 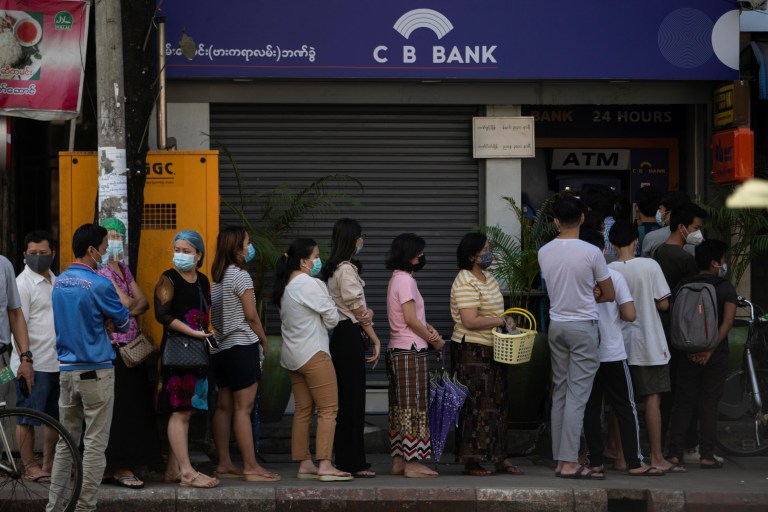 People line up outside a bank branch in Yangon, Myanmar, on Monday (Picture: Reuters) 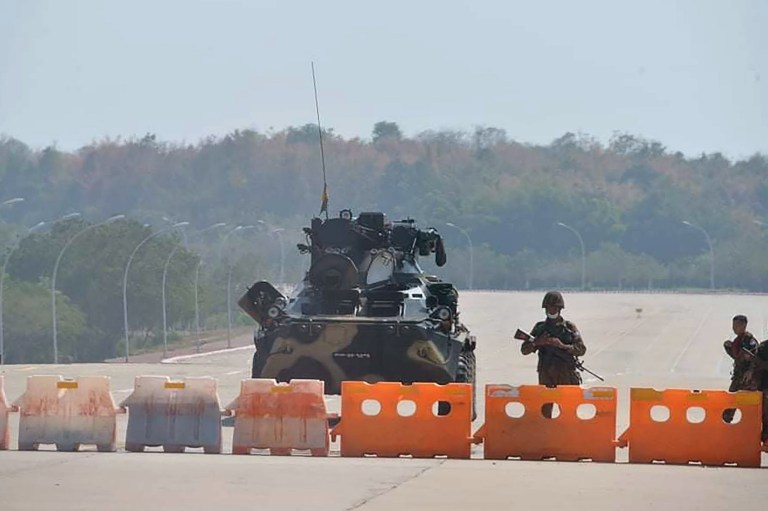 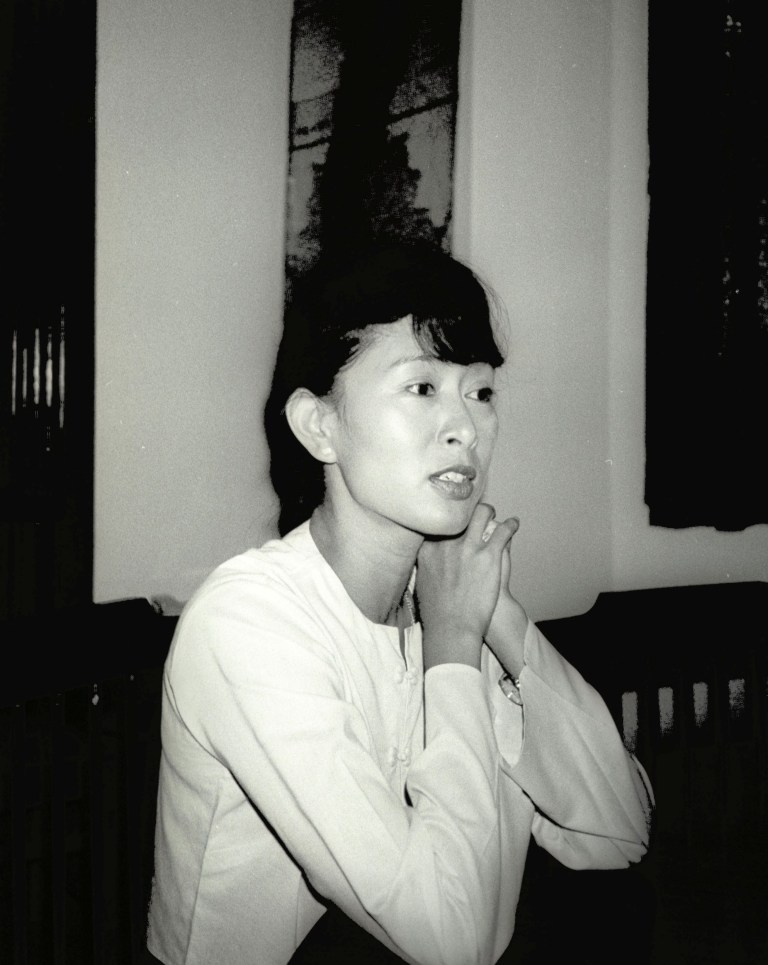 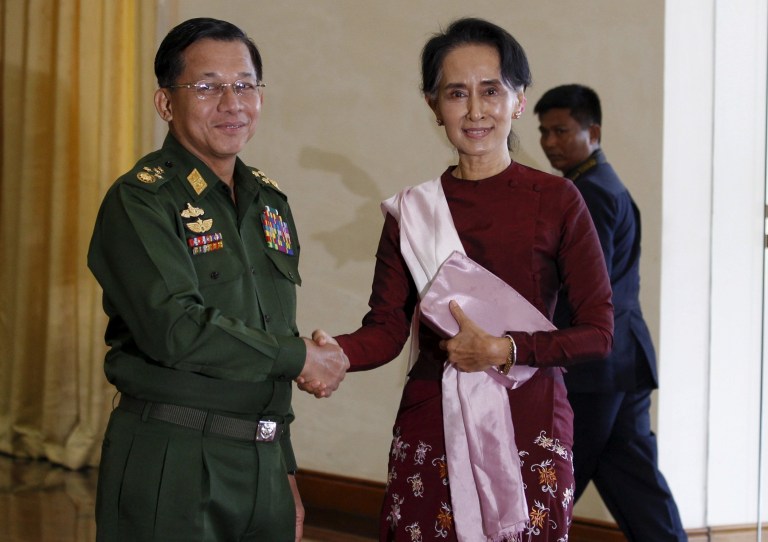 Myanmar legislators were set to gather on Monday in Naypyitaw for the first session of parliament since last year’s election.

Myanmar Visual Television and Myanmar Voice Radio posted on Facebook around 6.30am local time that their programmes were not available to broadcast regularly.

Ms Suu Kyi’s party captured 396 out of 476 seats in the combined lower and upper houses of parliament in the November polls, but the military holds 25% of the total seats under the 2008 military-drafted constitution.

The military, known as the Tatmadaw, alleged massive voting fraud in the election, though it has failed to provide proof. The state Union Election Commission last week rejected its allegations.

Last Tuesday, the Tatmadaw ramped up political tension when a spokesman declined to rule out the possibility of a coup at a weekly news conference.

Major General Zaw Min Tun elaborated by saying the military would ‘follow the laws in accordance with the constitution’.

The Commander-in-Chief, Senior General Min Aung Hlaing, told senior officers in a speech on Wednesday that the constitution could be revoked if the laws were not being properly enforced.

An unusual deployment of armoured vehicles in the streets of several large cities also fuelled concerns ahead of Monday’s events.

On Saturday, however, the military denied it had threatened a coup, accusing unnamed organisations and media of misrepresenting its position and taking the general’s words out of context.

On Sunday, it reiterated its denial, this time blaming unspecified foreign embassies of misinterpreting the military’s position and calling on them ‘not to make unwarranted assumptions about the situation’.