NHS staff could be handed a 3% pay rise this week as ministers attempt to prevent strikes over a far smaller offer.

There has been widespread backlash over the original 1% proposal, which critics say is an ‘insult’ to the sacrifices made by frontline workers during the pandemic.

The government is expected to bill the offer as a ‘fair compromise’, but it is unclear if it will be enough to see off a threat of strike action.

Health workers say a rise closer to 15% is needed to make up for a decade of real-term pay cuts, with the average band 5 nurse around £6,000 worse off now than 10 years ago.

According to Politico, the NHS pay review body recommended weeks ago that wages should be increased by 3%.

An announcement is expected tomorrow, when NHS staff are due to march on Downing Street calling on Boris Johnson to ditch the ‘pathetic’ 1% offer and instead back a 15% rise.

The PM will be told ‘claps don’t pay the bills’ as a petition signed by almost 800,00 people is delivered to his door.

The petition, set up by nurse Matthew Tovey, states: ‘Throughout the pandemic, thousands of NHS workers have been working around the clock, putting their lives at risk to protect the public. 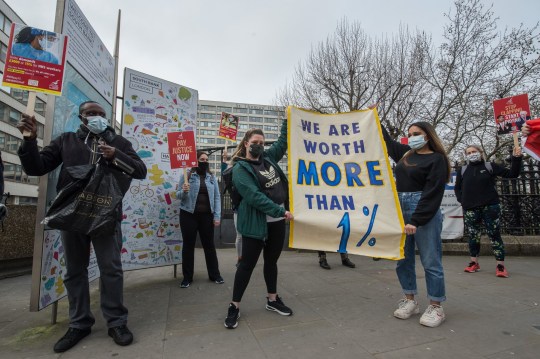 The 1% offer has been described as ‘insulting’ and ‘pathetc’ (Picture: Getty)

‘Yet the average nurse in the UK has lost 20% of their income the last 10 years. It’s not surprising that there are 100,000 vacancies within our NHS. And that many of us NHS workers are using food banks to get by.’

Downing Street declined to comment on the reports this afternoon.

Are you affected by the issues raised in this story? Email [email protected]

The government previously said 1% was all they could afford due to the economic hit caused by the coronavirus crisis.

But some unions say an inflation forecast of 1.5% this year means a 1% pay rise would actually amount to a real terms pay cut.

Healthcare union Unison has called for a £2,000 increase for every NHS worker.

Meanwhile the Royal College of Nursing (RCN) have called for a 12.5% pay increase, saying 1% would amount to only an extra £3.50 a week in take home pay for an experienced nurse.

The RCN have set up a £35m industrial action fund should its members wish to go on strike.

Earlier this month, the British Medical Association (BMA) said ‘exhausted and demoralised’ doctors could also refuse to do overtime if the rise wasn’t closer to 5%.

The organisation said below inflation rises have led to the estimated value of take-home pay falling by 28.6% in the last 10 years for the average consultant.

At the same time, consultants are typically working between an extra 10% and 20% over their contracted hours each week, often unpaid.

Striking could be highly disruptive as the NHS tries to clear record backlogs triggered by the pandemic, with 5 million people thought to be waiting for treatment. 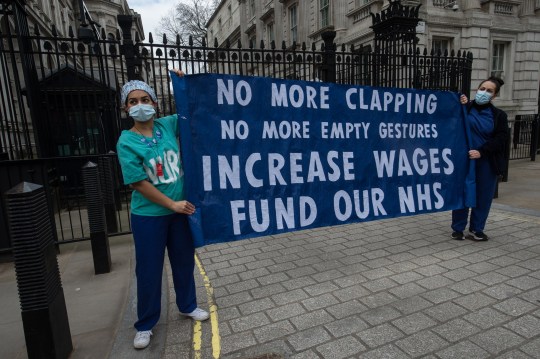 There are fears of a ‘mass exodus’ from nursing if pay isn’t increased significantly (Picture: Getty)

But critics say that without a significant pay increase, more and more staff will leave the profession at a time when demand for the healthcare service is higher than ever.

Last month, an ICU nurse who cared for Boris Johnson revealed she had quit over the lack of respect shown by the government towards the NHS.

Following the announcement health unions will ballot their members to either accept or reject the pay offer.

Scotland’s NHS workers have recently accepted a 4% pay deal backdated to December 2020 plus an additional £500 lump sum rewarding their hard work during the pandemic.