Coronavirus admissions in London appear to be plateauing, but the Omicron wave is now hitting other parts of the nation.

Health bosses are in discussions with military officials as nearly 130,000 new cases are reported and virus-related deaths hit an 11-month high today.

It comes after hundreds of troops were summoned to hospitals in the capital last week.

Demand has surpassed last year’s Covid peak in Greater Manchester as up to 15% of staff isolate at home.

The pressure is mainly on general beds which are more than 90% full, while some non-urgent surgery was already halted last week.

Soldiers could also be asked to help with basic care including hydration and nutrition for those in ‘super surge’ beds in mini-Nightingale-style facilities.

Greater Manchester has not followed dozens of other NHS trusts in declaring a ‘critical incident’, with suggestions bosses ‘want to avoid intense national NHS scrutiny’.

Chris Brookes, acute lead for Greater Manchester and an A&E consultant at Salford Royal, said: ‘The word I’d use is uncomfortable. When bed occupancy is in the low to mid 90%, that is an uncomfortable place.’ 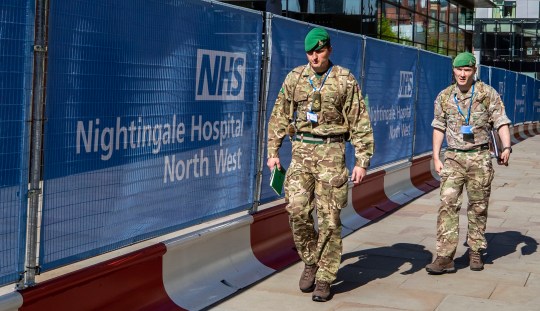 Another senior clinician said: ‘It has necessitated really high levels of cooperation between hospitals, and to be frank, if hospitals had functioned as “islands” it wouldn’t have worked.

‘That has put huge demands on staff though. We’ve not been overwhelmed but, yet again, we’ve had to ask them to go above and beyond.’

Meanwhile, Northern Ireland Health Minister Robin Swann made a new request for military assistance tonight as thousands of staff are off sick.

Health workers are ‘under severe pressure’ a Department of Health spokesperson said.

The Government spokesperson added: ‘The current pressures involve a number of factors including Covid and wider winter pressures on services and Covid-related staff absences.

‘We would thank the public for their continuing support for our health service at this critical time, including all those who have come forward for their vaccine booster dose.’

Troops have come to Northern Ireland on three previous occasions during the Covid crisis under an arrangement known as Maca (Military Aid to Civilian Authorities).

The news emerges as British Prime Minister Boris Johnson faces calls to resign relating to his own behaviour during the Covid crisis.

The Tory leader has admitted attending a Downing Street party of 40 during lockdown, but insists he thought it was a ‘work event’.