One traveller complained they were given only a €15 voucher to make up for the terrifying delay (Photo by Urbanandsport/NurPhoto via Getty Images) (Picture: Joan Valls/NurPhoto/Getty Images)

Flight passengers feared the worst when the pilot ‘fainted’ in the cockpit at 30,000ft, forcing the plane into making an emergency landing.

Travellers on the Jet2 aircraft heading from Birmingham Airport to Antalya in Turkey had to make a stop in Greece due to what the airline called a medical emergency.

One raging holidaymaker said the ordeal delayed the start of their break by eight hours, and complained they were given only a €15 voucher to cover a ‘basic meal’ in compensation for the terror.

A Jet2 spokesperson insisted the flight was diverted as a ‘precautionary measure’ and stressed teams worked extremely hard to look after passengers and apologised for the delay.

But the outraged traveller said about the incident on August 23 starting when the plane hit turbulence: ‘While we were all seated we noticed something was going on at the front of the plane. We thought someone had hurt themselves in the toilet while experiencing turbulence.

‘We were told we were landing in Greece due to a medical emergency on board. We weren’t told what part.’

The plane landed in Thessaloniki, Greece, and stayed on the runway for about an hour waiting for an ambulance to arrive. 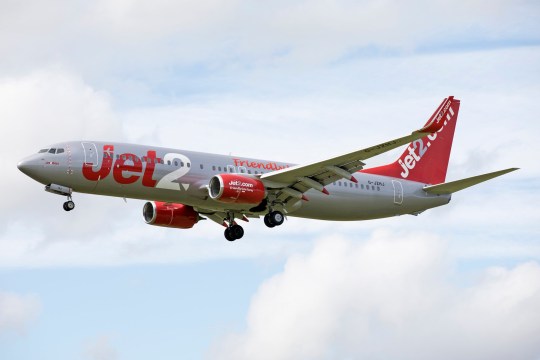 The passenger added: ‘People were worried as we’d just been through turbulence and we didn’t know what was happening.

‘Passengers then got frustrated as once we were off the plane no one was updating us.

‘The crew were amazing but once in the airport it was chaos.’

A Jet2 spokesperson said: ‘Flight LS1239 from Birmingham to Antalya diverted to Thessaloniki Airport as a precautionary measure on Tuesday (August 23) due to one of the pilots feeling unwell.

‘A replacement crew were flown to Thessaloniki so that we could get customers on their way to Antalya that same evening.

‘We communicated this to our customers as soon as possible, and our teams worked extremely hard to look after everyone.

‘We would like to apologise to anyone affected by this unforeseen delay.’

Stewards reportedly informed flyers the pilot had ‘fainted’ but medical emergencies are not covered in Jet2’s compensation policy.