COPS have dashed to Westminster this afternoon and two bangs were reportedly heard as residents and workers are urgently evacuated from buildings.

Officers have closed a number of streets in the area around Parliament Square and witnesses say they’ve seen a bomb disposal robot.

Cops have rushed to Westminster Abbey after a suspicious vehicle was found this afternoonCredit: Sun Online 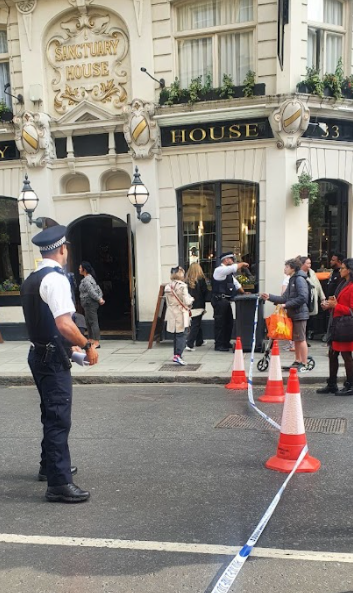 People in buildings nearby have been urged to evacuate, it’s understood. Two loud ‘bangs’ were also reportedly heardCredit: Sun Online

It’s claimed people are also being moved away from the Houses of Parliament.

However, the focus of the investigation is believed to be conference centre Queen Elizabeth II in Broad Sanctuary.

Sniffer dogs are at the scene. Cops say they’re concerned about a suspicious vehicle.

It’s not clear if that is connected to the police incident.

“Traffic closed off by police vehicles and tape.

A spokesperson from the Met Police said: “Police are at currently in the vicinity of Westminster Abbey dealing with an ongoing incident involving what is believed to be a suspicious vehicle.

“A number of road closures are in place while emergency services deal with the incident.”

David Milliken of news agency Reuters tweeted: “Something going on near Westminster – streets cordoned off and people being moved away.

Another social media user said her husband had been evacuated from a conference in Westminster.

“Police and helicopters about,” she said.

“Anyone know what’s going on?”