The Prince of Wales represented the Queen at Birmingham’s Alexander Stadium (Picture: Getty)

Prince Charles posed for selfies and team photos with hundreds of athletes ahead of the Birmingham Commonwealth Games opening ceremony.

The Games opened on Thursday evening with a promise to be the biggest sporting festival in the UK since the London Olympics a decade ago.

The Prince of Wales represented the Queen at Birmingham’s Alexander Stadium.

Beforehand, he toured the main athletes’ village meeting sportsmen and sportswomen from dozens of nations, and posing for group photographs with teams including Scotland, Rwanda, Sierra Leone and – naturally – Wales.

Charles spent half an hour chatting with competitors, joking with members of the Australian team ‘all the rest are terrified of the Aussies’.

He quipped with a coach from Team Wales: ‘Do they listen to everything you say to them – I bet they don’t go to bed on time.’ 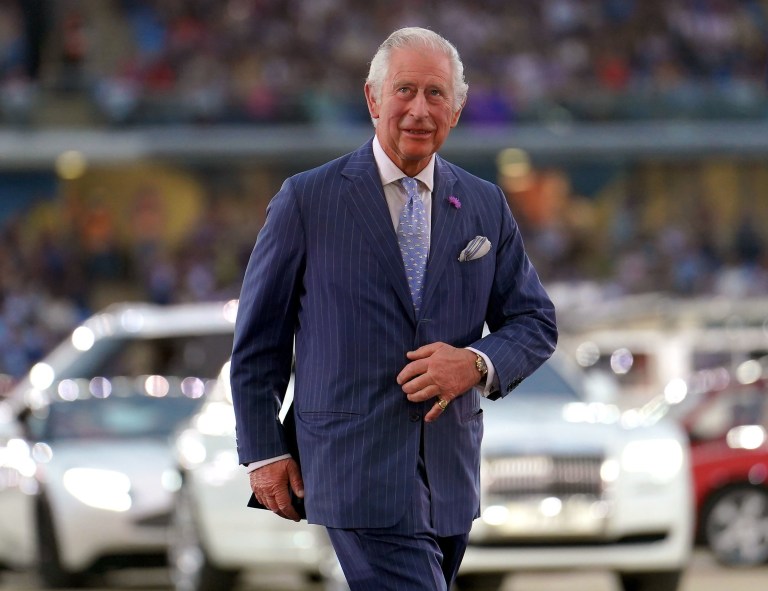 The Prince of Wales during the opening ceremony (Picture: PA) 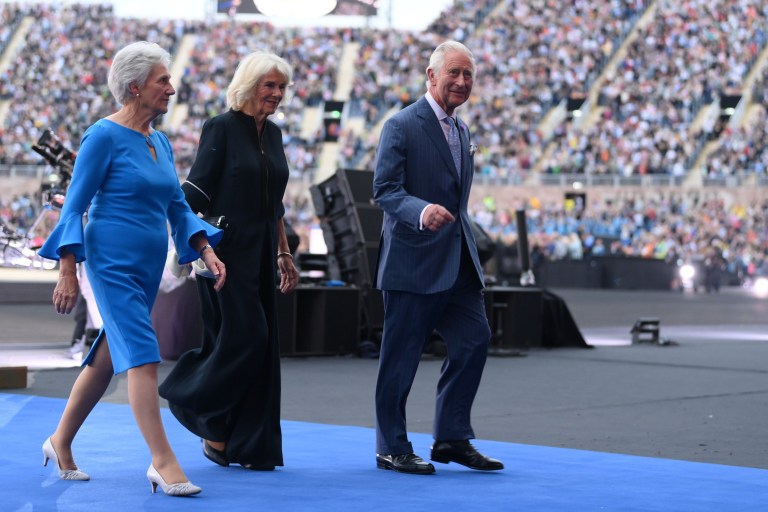 Charles was accompanied by the Duchess of Cornwall (Picture: Getty) 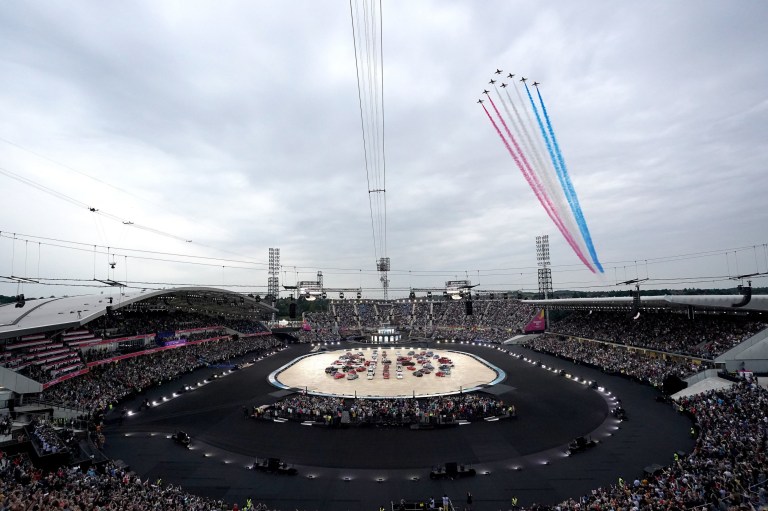 The Red Arrows flypast goes over the stadium (Picture: PA)

Declaring the 2022 Commonwealth Games officially open on behalf of the Queen, Charles said: ‘On October 7 last year, this specially created baton left Buckingham Palace to travel across the Commonwealth.

‘Over the past 294 days, it has carried not only my message to you, but also the shared hopes and dreams of each nation and territory through which it has passed, as it made its way to Birmingham.

‘Over the years, the coming together of so many for the ‘Friendly Games’ has created memorable shared experiences, established long standing relationships, and even created some friendly rivalries.

‘But above all they remind us of our connection with one another, wherever we may be in the world, as part of the Commonwealth family of nations.’ 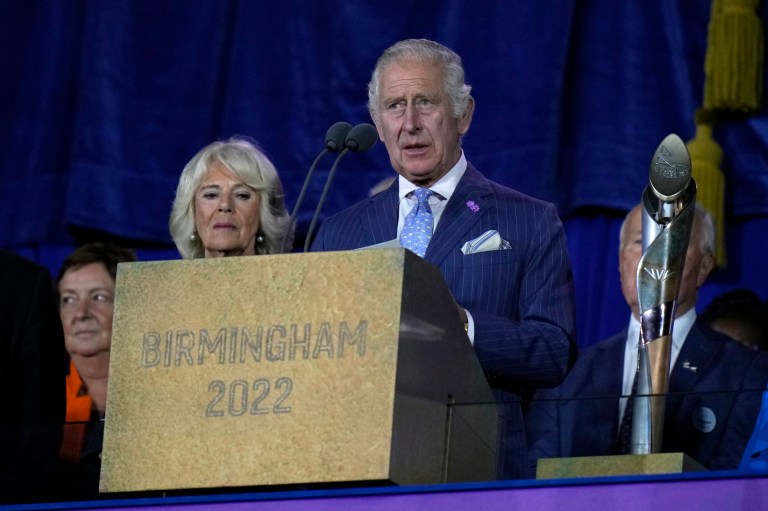 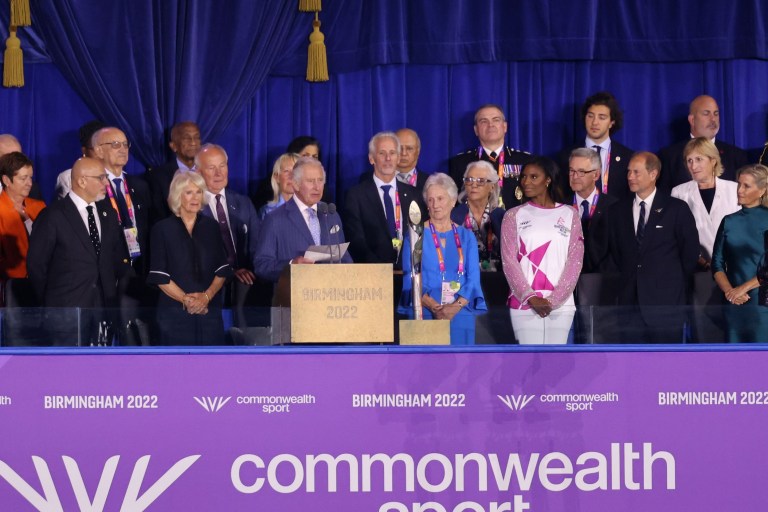 He was flanked by Camilla, President of the Commonwealth Games Federation (CGF) Louise Martin, Prince Edward, and Sophie, Countess of Wessex (Picture: Getty) 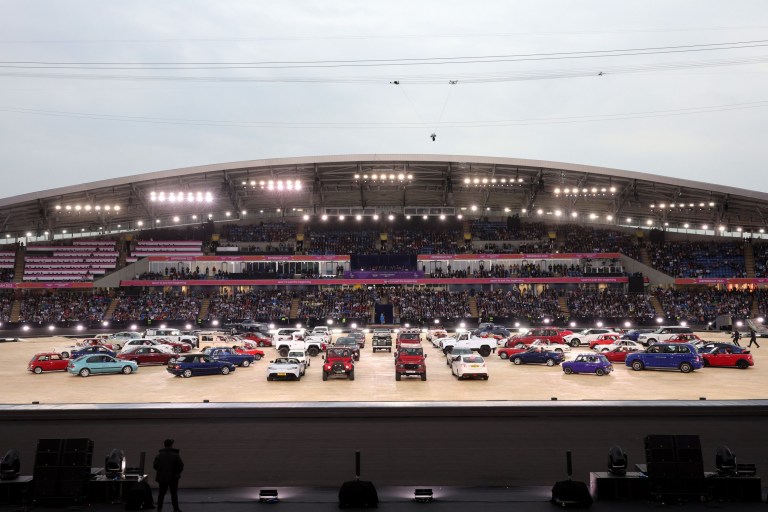 The Opening Ceremony of the 2022 Commonwealth Games (Picture: Getty)

He went on: ‘Tonight, in the words of the founder of the Games, we embark once again on a novel adventure here in Birmingham, a pioneering city which has drawn in and embraced so many throughout its history.

‘It is a city symbolic of the rich diversity and unity of the Commonwealth, and one which now welcomes you all in friendship.

‘I wish each athlete and team every success. Your hard work and dedication, particularly in recent times, have been an inspiration to all of us.

‘It now gives me the greatest pleasure to declare the 22nd Commonwealth Games open.’ 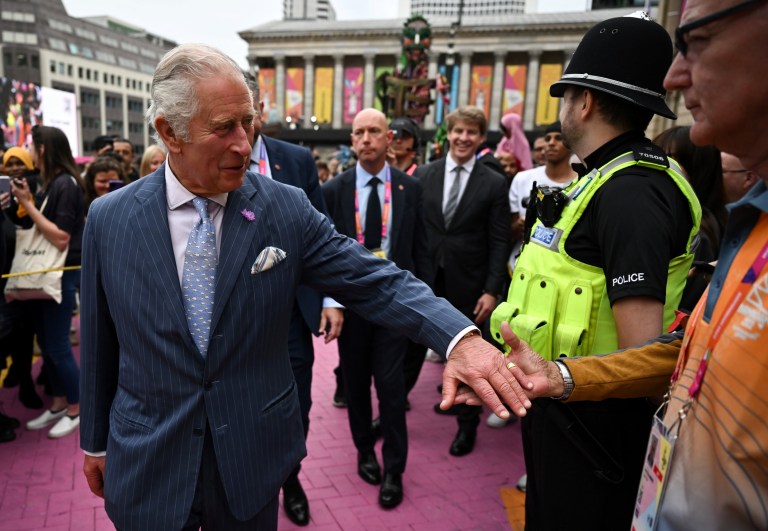 Charles shakes hands with a member of staff during a visit to the Commonwealth Games ‘Festival Site’ (Picture: Getty) 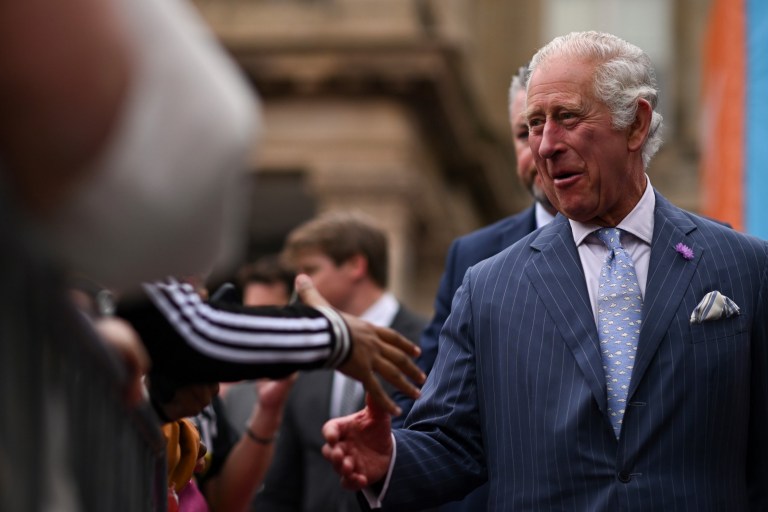 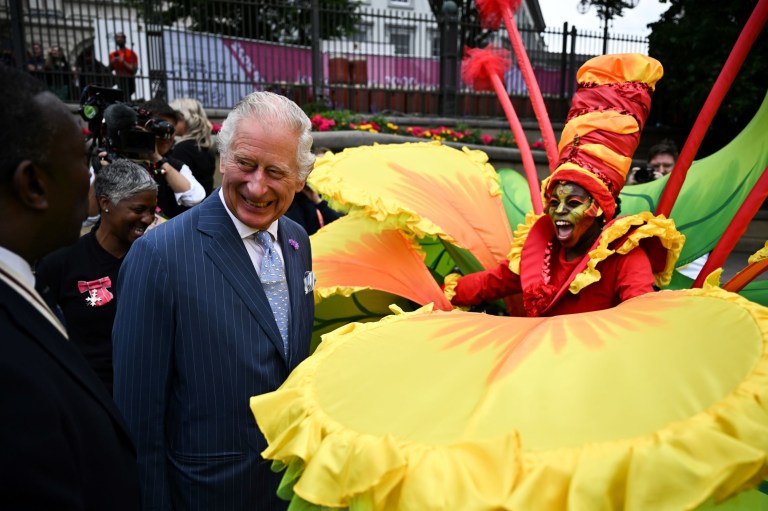 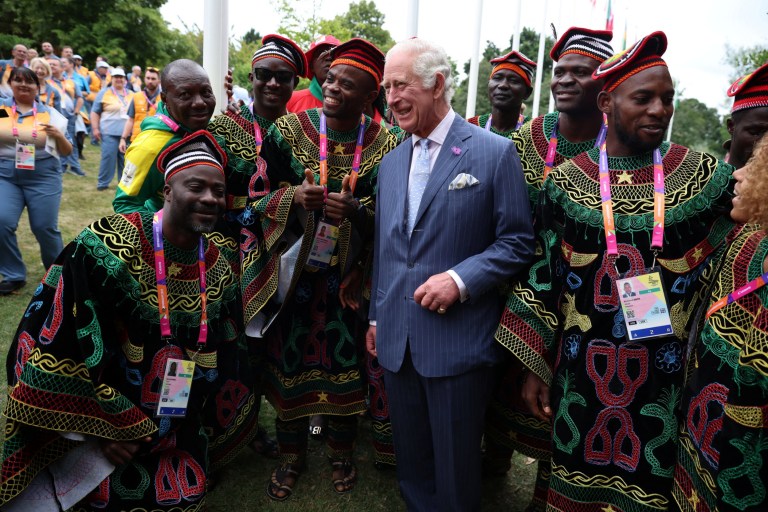 The prince with athletes and team members from Cameroon (Picture: Getty) 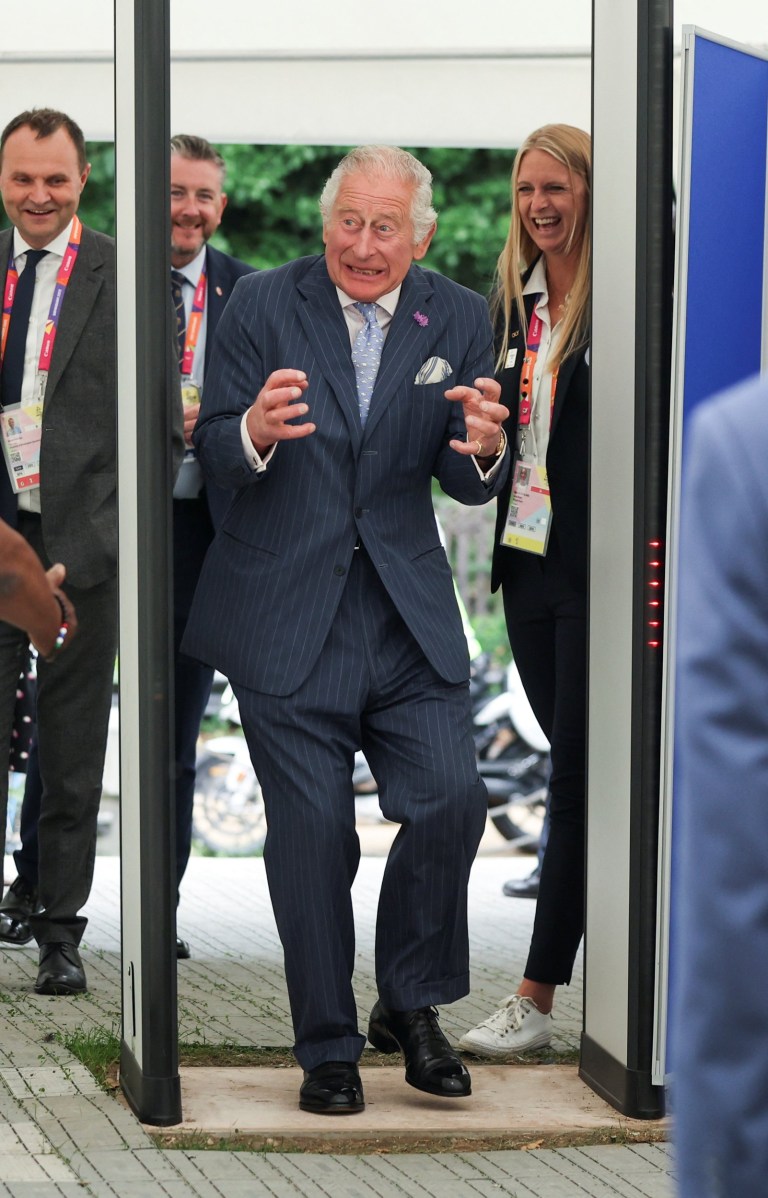 Charles cracked up security staff after setting off the metal detector (Picture: Getty) 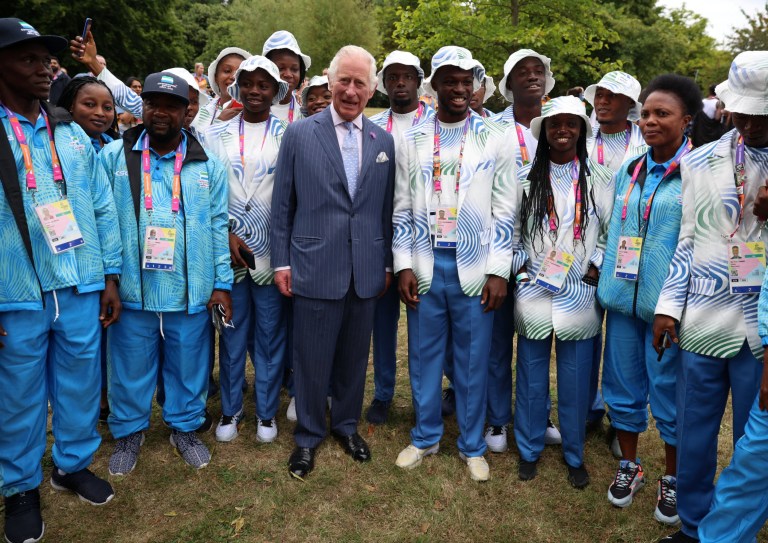 Charles with athletes and members of the team from Sierra Leone (Picture: Getty)

He was mobbed by athletes within the village who had waited 30 minutes for his arrival, all keen to get a selfie, or livestream to family members back home.

Many of the countries pressed their team pin badges into his hand, including Pakistan, the Cayman Islands and the Isle of Man squads.

Charles also caused the site’s security team some mirth when he opted to step through the metal detector archway – setting it off, before smiling and raising both hands apologetically.

Earlier, Boris Johnson said he was ‘supremely confident’ there would be a legacy from the £778 million of taxpayers’ money which has gone into the games – which are being held as the country faces a cost-of-living crisis.

The outgoing PM told the Commonwealth Business Forum in the West Midlands city: ‘You can feel the excitement here in this mighty city of Birmingham because the athletes are already here in their thousands, from 56 countries, 72 nations and territories around the world.’

He added: ‘Already you can hear the voices on some parts of the media of those who doubt that the whole thing will be worth it.

‘And people say, can we afford it? Should we have done it with the pressure on the cost of living? Will there be a legacy from the £778 million of taxpayers’ money that has gone into these Games?

‘And so right now, I want you to know I am here to tell you that I am supremely confident that the answer to that question is yes. A thousand times, yes. I say so because I remember, almost exactly 10 years ago, an identical moment of nerves just before the beginning of the London 2012 Games.’ 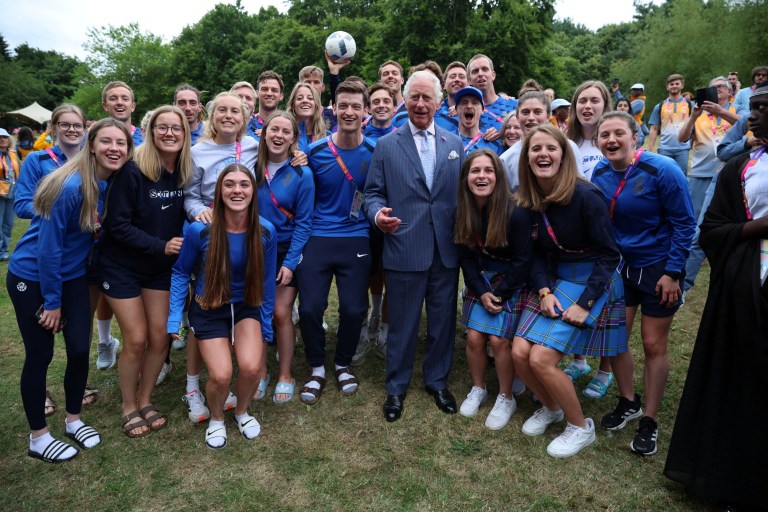 The Prince Of Wales poses with athletes from Scotland (Picture: Getty) 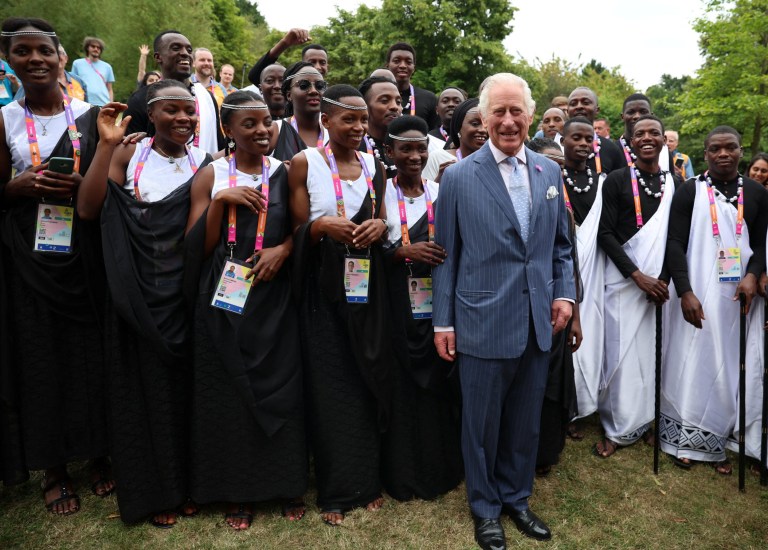 With athletes and members of the team from Rwanda (Picture: Getty) 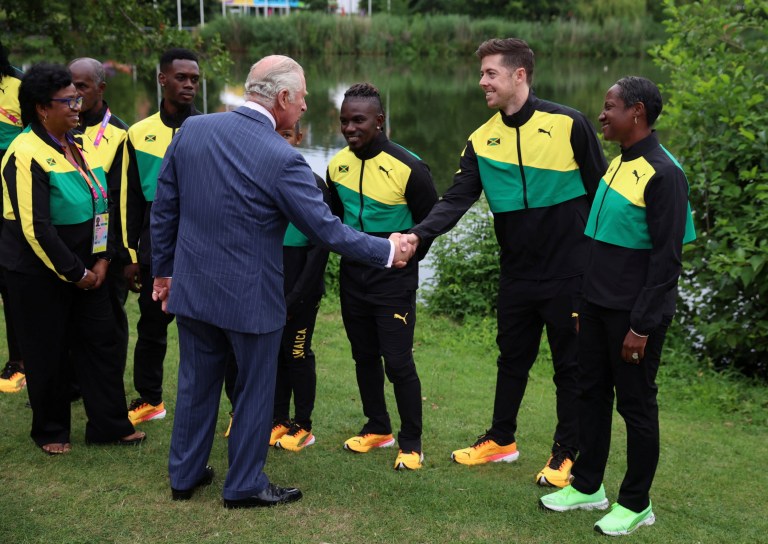 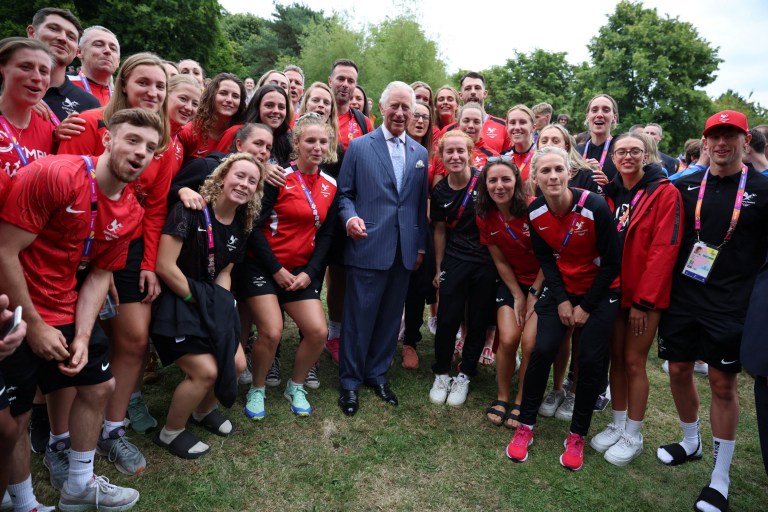 Mr Johnson, who was London mayor at the time of the 2012 Summer Olympics, insisted they ‘continue even to this day to deliver thousands of jobs, growth, regeneration’ in the capital.

Birmingham was awarded the Games after scheduled host Durban in South Africa pulled out over financial problems.

Later Charles toured a launch party for the Games in Victoria Square, one of a number of sites hosting the Birmingham Festival – a six-month arts, food and culture event for 2.5 million people in the region.

The heir to the throne stopped at a pop-up stall run by Asha’s, an award-winning restaurant in the city which has prepared dishes for Hollywood star Tom Cruise, but Charles was not tempted by a table of food that included butter chicken, grilled lamb chops and lamb gosht.

After asking the chef what spices he had used, the prince quipped: ‘I haven’t got an asbestos mouth.’

He also stopped to chat to Keisha Howe from Ace Dance and Music, who was dressed in an elaborate carnival costume, and she cheekily asked the future king: ‘Do you want to wear this one day?’

The prince replied with a smile: ‘I don’t think I qualify to wear that.’

Charles went on an extensive walkabout shaking hands and chatting to the crowds which featured many people – from Somaliland to France – who had travelled to the West Midlands for the Games.

At a nearby hotel the prince joined a reception attended by the Culture Secretary and high commissioners from across the Commonwealth.