HOME Secretary Priti Patel has said she would refuse to “take the knee” in support of Black Lives Matter after criticising last summer’s protests.

Speaking on LBC radio this morning, Patel described the anti-racism protests, sparked by the death of George Floyd, as “dreadful”. 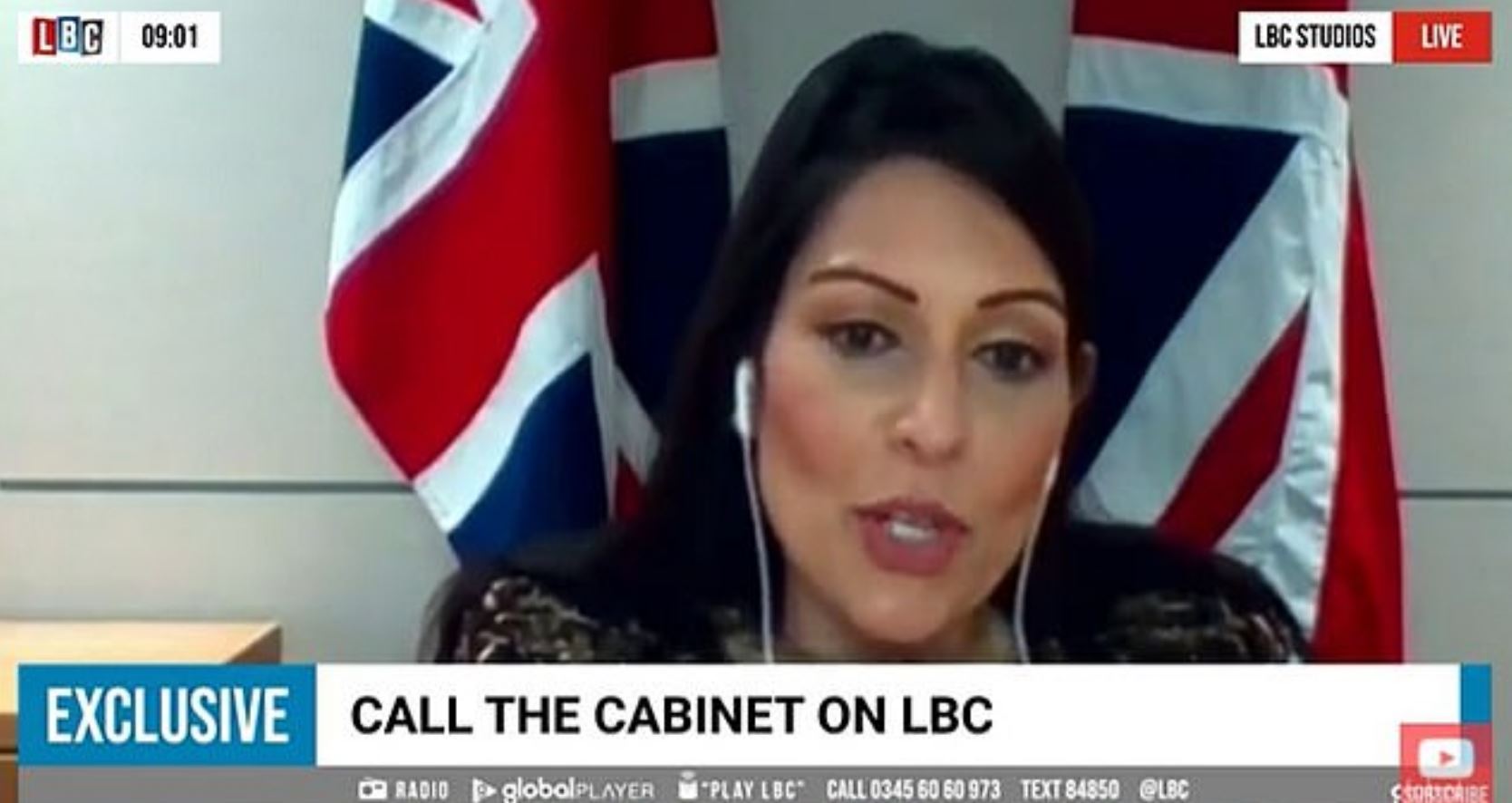 Priti Patel speaking on LBC this morning said she would refuse to ‘take the knee’Credit: LBC 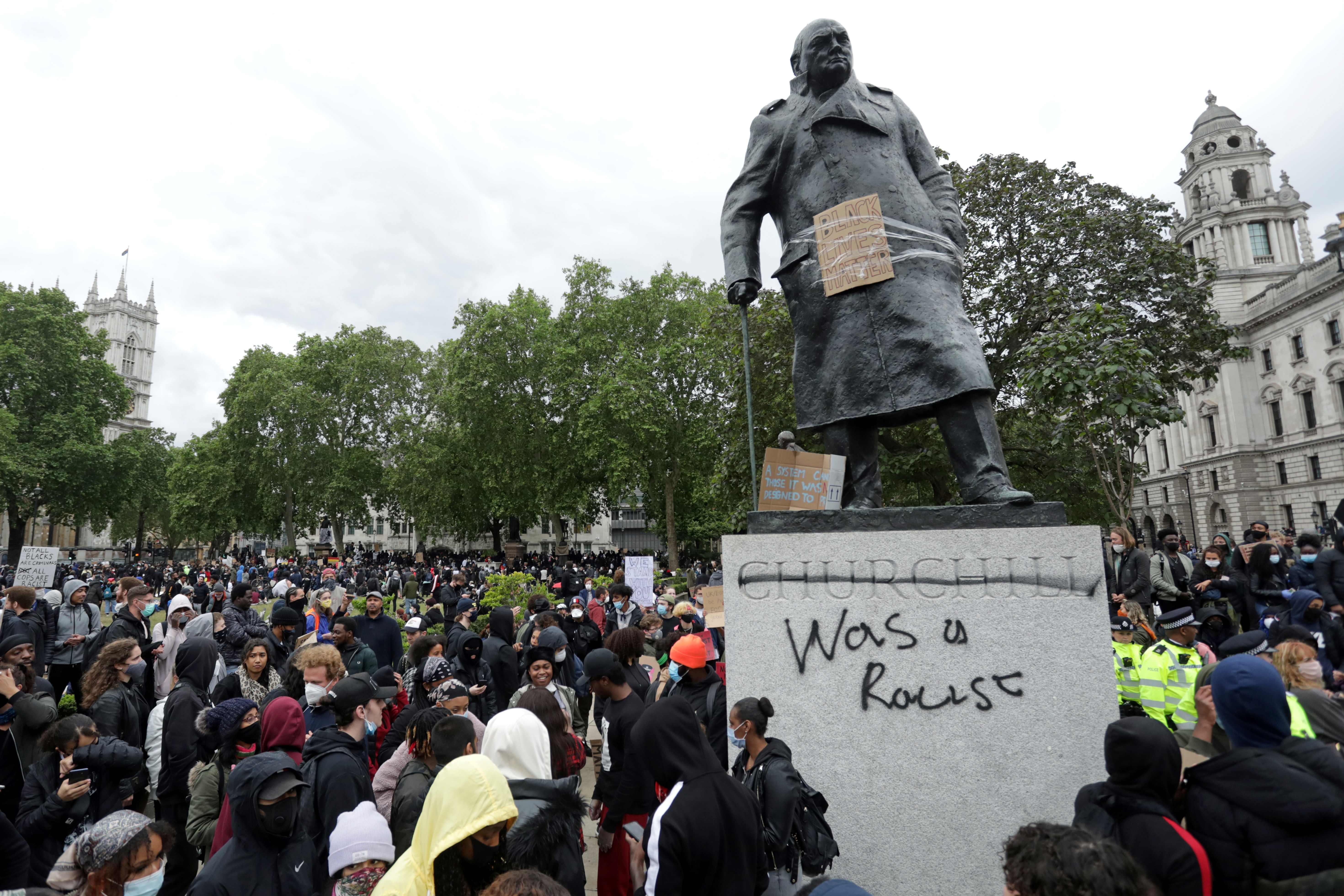 The Home secretary called last summer’s BLM protests ‘dreadful’. Pictured: The statue of Winston Churchill is defaced with the words ‘was a racist’ written on its base.Credit: AFP or licensors 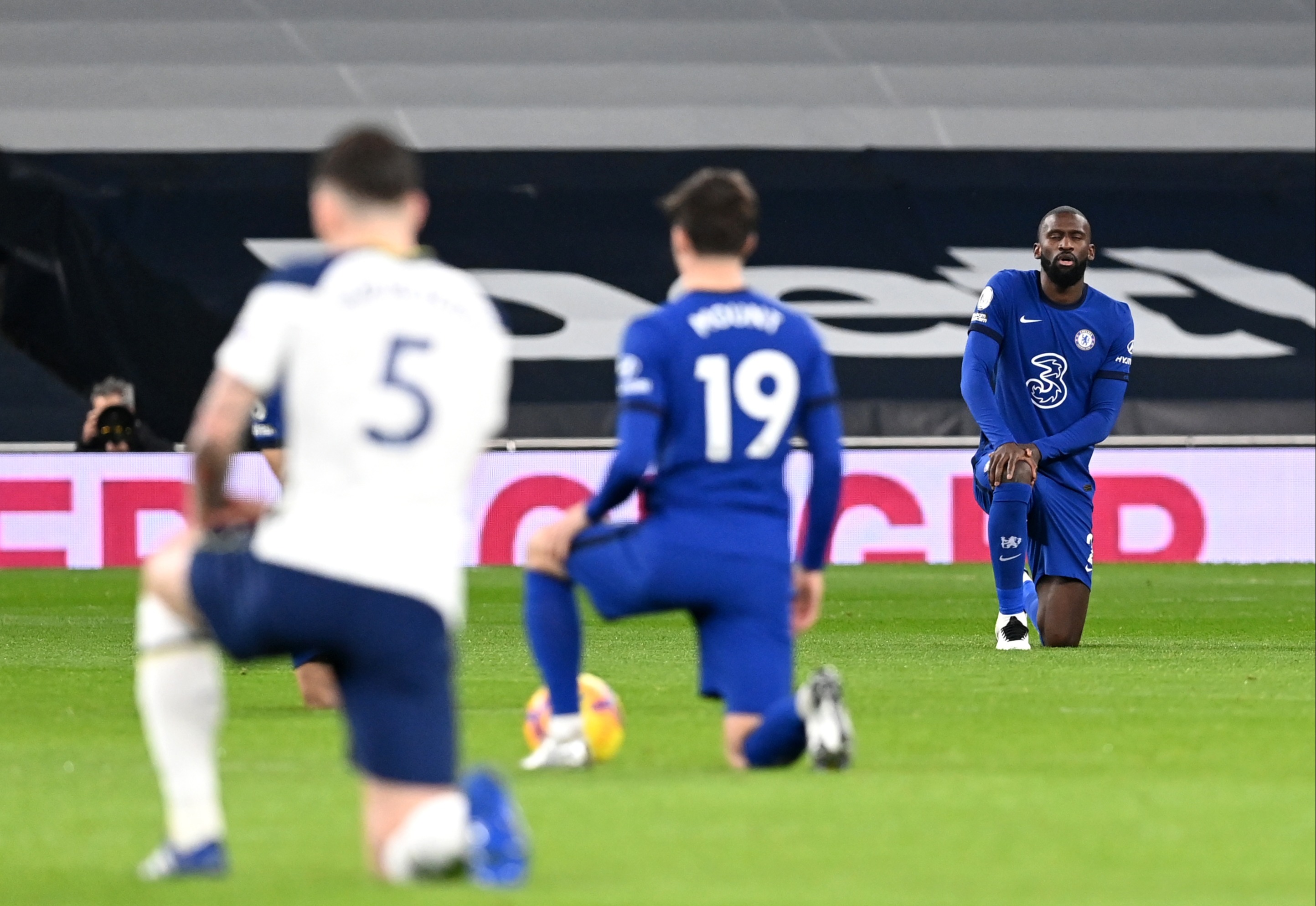 Footballers ‘take the knee’ before a match – in support of the Black Lives Matter movementCredit: Getty – Pool

On May 25 last year, Floyd died in Minneapolis, USA, after a white police officer held him down by pressing his knee onto his neck for almost nine minutes.

The Home Secretary told Call the Cabinet’s Nick Ferrari that she would not take a knee, an act of solidarity against racism carried out in Floyd’s memory which has been adopted by sports stars and public figures.

“Last summer was quite a moment with all the protest that we saw taking place,” she told LBC.

“We saw policing as well coming under a great deal of pressure from some of the protest.

“I don’t support protest and I also did not support the protests that were associated.

After being interrupted, she sought to clarify that she was not criticising the right to protest but rather the “dreadful” action last year.

Asked if she would take a knee, Ms Patel said: “No, I would not. I would not have at the time either.

“There are other ways in which people can express their opinions.

“Protesting in the way in which people did last summer was not the right way at all. We saw statues being brought down.”

Asked if she agrees with the gesture more generally, she replied: “No.”

Although many demonstrations were peaceful last year some turned violent as protesters clashed with police.

In Bristol, protesters tore down a controversial statue of the slave trader Edward Colston during the height of the protests in June.

Last July the Prime Minister insisted that people should not be “bullied” into taking the knee for the Black Lives Matter movement.

Boris Johnson admitted there are “injustices we need to rectify” but suggested he would not take a knee as he “doesn’t believe in gestures”.

Mr Johnson said: “If you think of what happened with those officers standing at the Cenotaph…they were being insulted in quite aggressive terms by members of the crowd and told to take the knee.

“Some of them did and it was very difficult for the others who didn’t. That’s my position.”

Meanwhile, Jacob Rees-Mogg has accused Sadiq Khan of overseeing “looney left-wing wheezes” over a new body that could remove statues and change street names in the capital that are deemed offensive.

The Commons leader said Mr Khan was “treading on the toes” of the local councils with plans to change street names.

Fifteen panalists have been selected for Mr Khan’s Commission dor Diversity in the Public Realm that was raised in the Commons yesterday.

The homepage of the commission notes that London statue’s, plaques and street names reflect a “largely bygone era”.

Conservative Andrew Rosindell told the Commons: “The Leader of the House will be aware that the Mayor of London has announced a new taskforce for his commission on diversity in the public realm.

“Unsurprisingly it seems to be made up almost entirely of left-wing political activists, campaigners and celebrities instead of historians and experts.

“Do you share my concern about these unelected activists being given the power to interfere with London street names and monuments, and will he consider granting a debate in Government time to discuss how we can defend our great capital city’s proud history and heritage?”

Boris Johnson’s Press Secretary Allegra Stratton was asked if “loony left-wing wheezes” was the sort of civil and kind language the PM wanted to see, to which she replied: “The point the PM would want emphasising is that we all have to learn from our history good and bad.

“That we aren’t going to learn very much from the past if we erase too much of it. We need to be confronted by it and learn from it. That’s the key thing that the PM feels in this debate.” 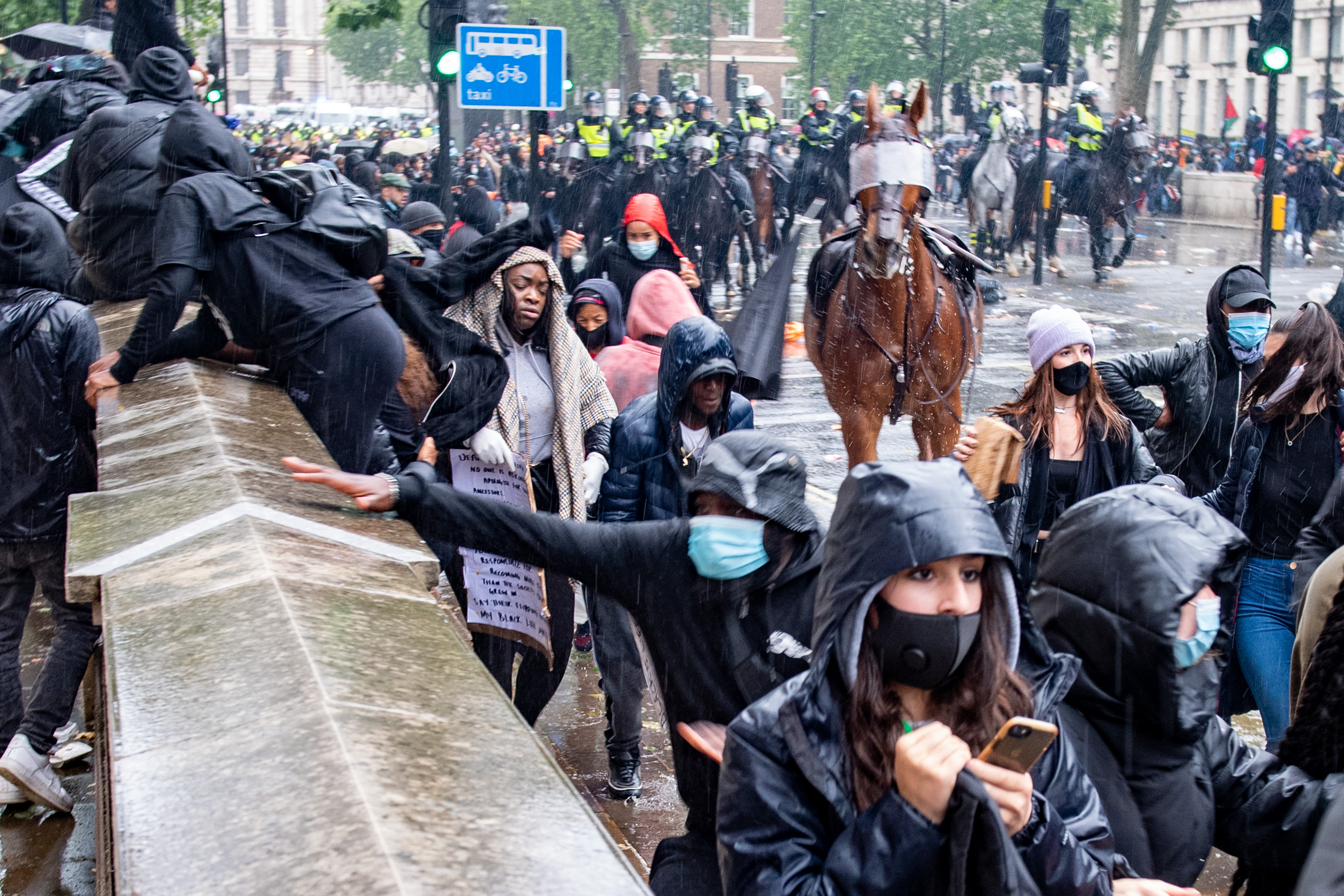 People run for cover as a police horse runs wild on Whitehall after it’s rider came off in June 2020Credit: London News Pictures 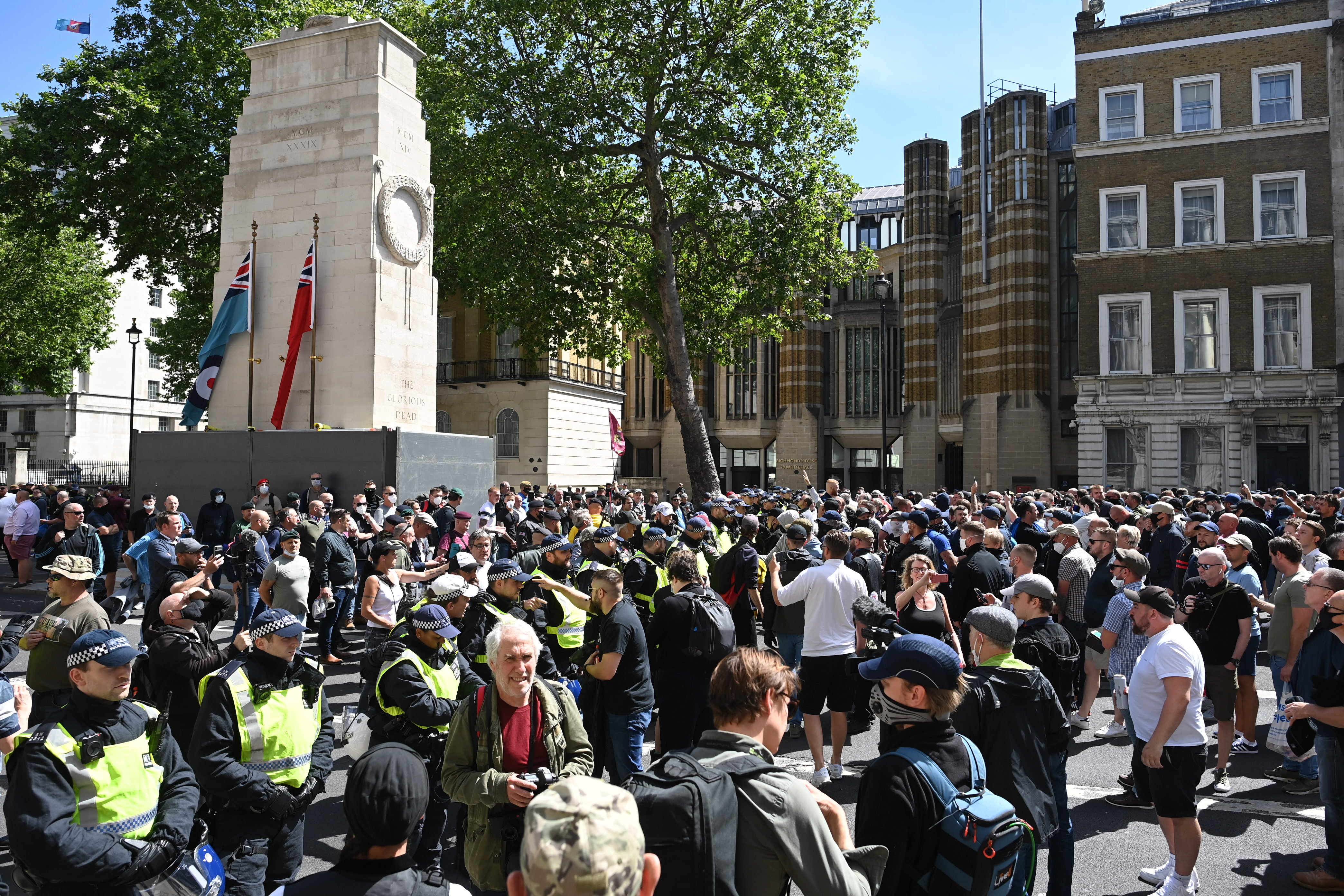 Police confront a group of far-right protesters on Whitehall, ahead of a Black Lives Matter demonstration in central LondonCredit: London News Pictures 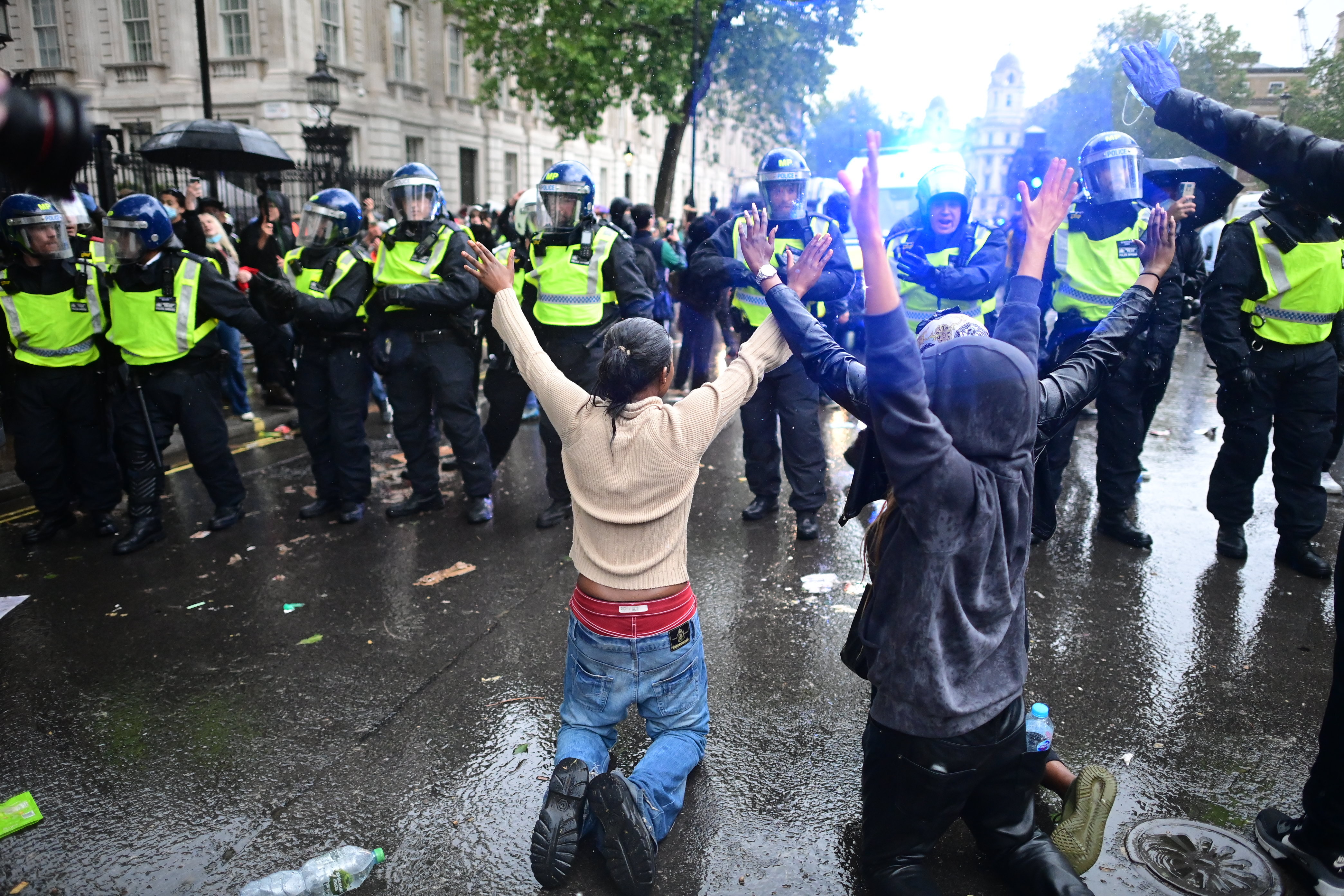