A WOMAN who hurled racist abuse at train passengers has claimed she “lost the plot” after being chatted up. 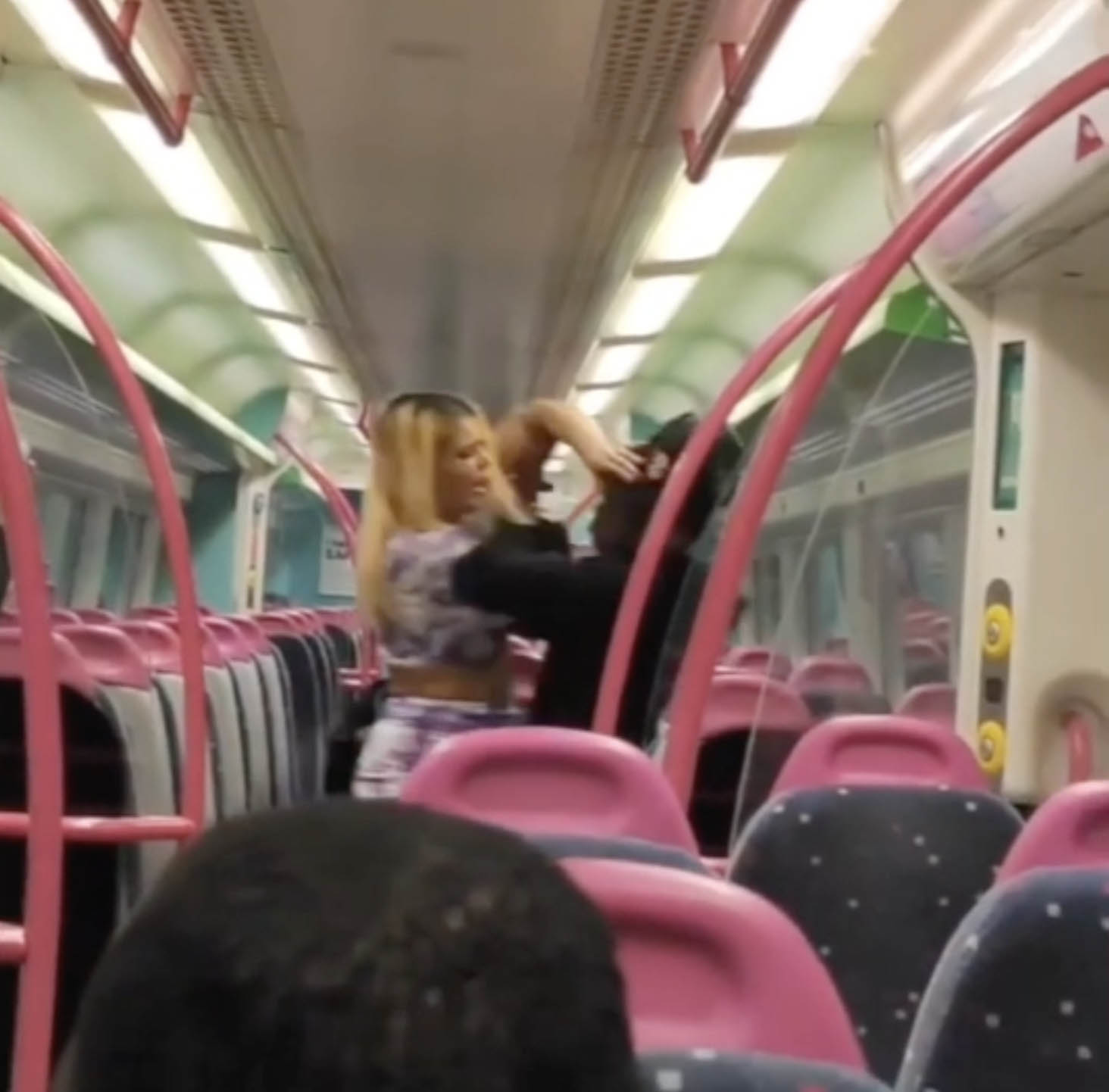 After threatening to ‘fight’ the man she launches into him

But last night she insisted she is not a racist – and defended her vile rant, claiming she became enraged when a passenger asked for her number.

Ms Ahmed told MailOnline: “He was giving me the eye when I got on the train and was trying to chat me up and asked for my number. I told him to leave me alone because I’m Muslim.

“When I said that he started screaming at me: “What sort of Muslim woman are you?

“Look at the way you’re dressed. You’re showing off your body. You’re a whore, you should be ashamed of yourself.”‘

Ms Ahmed added: “I became really angry and had to defend myself. I’m proud to be a Muslim woman and there’s nothing in the religion that says that we have to cover up. It’s nobody’s business how I dress.”

She said she suffers from autism, is on anti-depressants and had been drinking at friend’s house beforehand.

When asking about using the ‘n’ word during the sickening outburst, she claimed: “I didn’t mean it in a derogatory way.

“My friends use it all the time when referring to each other and most of them are black. I live in East London and it’s commonly used by all races.”

She added: “There was clearly a reason why I became so angry, but the video doesn’t tell you the whole story.

“The guy who filmed it only recorded one part of it and you don’t see what started this whole thing off.”

Adding she has “nothing to hide”, she said she’d voluntarily attended a police station last night and was asked to return next week once police view CCTV.

Ms Ahmed said she had received death threats since her revolting rant.

Wearing a tummy-baring purple outfit, Ms Ahmed is seen screaming expletives at a passenger before getting more enraged and attempting to shove him.

I became really angry and had to defend myself

She screams on a C2C train in West Ham, East London: “I’ll spit in your face! Hello! You’ve got a fat belly you know”.

She then mutters something intelligible at the man before threatening another passenger, saying: “Ok I’m going to have to punch up this Asian lad.”

She returns her attention to the first passenger and squares up to him and shouts: “Listen! Don’t ever raise your f*cking hands to her! You understand? Because if you see me, I’ll cut your head off!”

Before headbutting him, she threatens: “Try me! Try me n****r! I’ll stab you in the f*cking face! You understand?”

He defends himself and pushes her to the other side of the train.

He tells her to stay back but she continues her bizarre insults: “You’re an Essex boy! You’re a countryside boy! Do your homework! Even if your b****es are countryside b****es”

She is told to stop picking on train commuters and to act with more self-respect, to which she replies: “Shut the f*** up you little countryside b*tch!

In another shocking clip, passengers confronted her and tell her she is being racist.

They ask: “If you say you’re half-Kenyan then you shouldn’t be racially abusing someone else?”

“You don’t know who you’re piping with.”

But instead she starts savagely hitting and pushing another passenger screaming.

At the end of the clip, she says she regrets not bring her ‘rams’ which is slang for a Rambo knife so she could attack the cameraman.

She then calls another passenger on the train “a dirty half-Asian motherf****r” before the clip ends.

“Officers are aware of footage on social media of this incident, and enquiries into it remain ongoing. 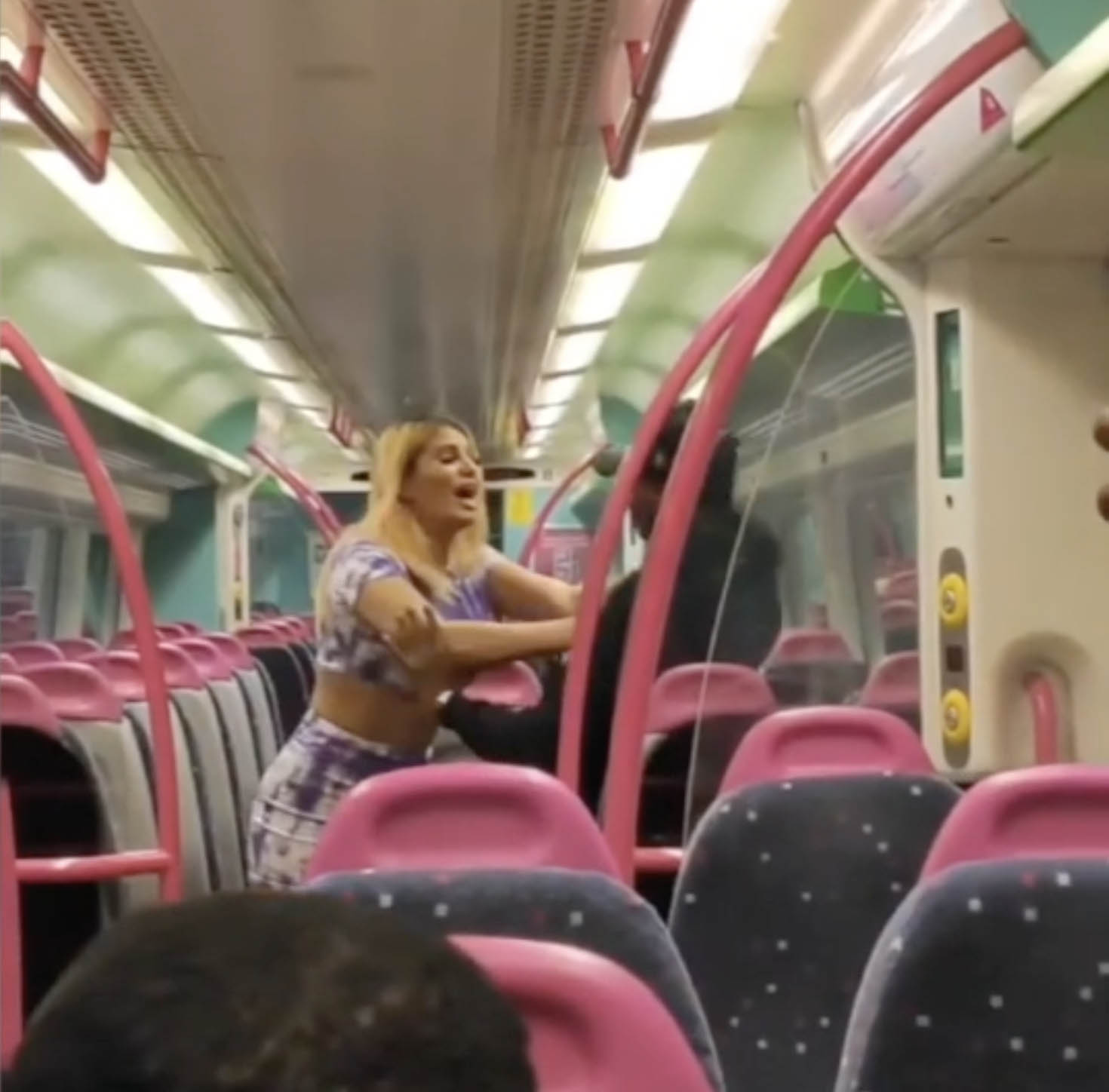 She attacks the another passenger on train 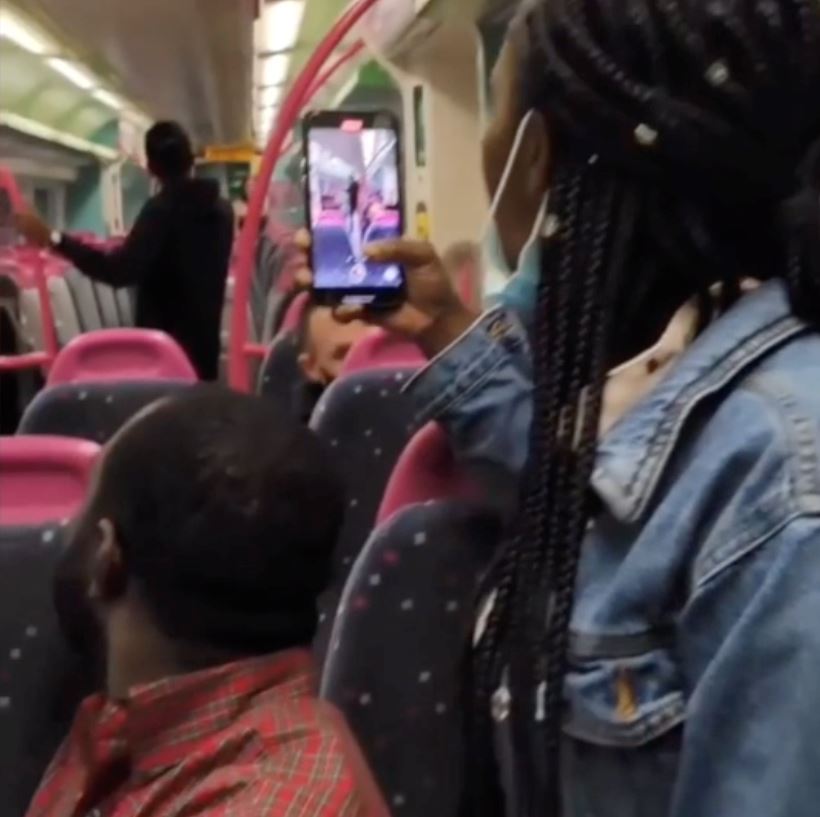