You can buy the brand new coin this summer (Pictures: Royal Mint/Getty Images)

The Royal Mint has unveiled a rainbow-coloured 50p to celebrate the 50th anniversary of the Pride movement in the UK.

History has been made with the new addition as it is the first time the nation’s LGBTQ+ community has been recognised on an official coin.

Designed by east London artist and activist Dominique Holmes, it is inscribed with the words protest, visibility, unity, and equality – Pride in London’s key values.

The coin won’t enter general circulation, but will be available to buy in a range of metals this summer.

It comes weeks before Pride month, a time dedicated to celebrating LGBTQ+ communities across the world.

It is held in June as this was the month the Stonewall riots erupted in New York, triggering the rise of LGBTQ+ rights movement across the world.

Asad Shaykh, director of marketing and communications at Pride in London, said it was ‘a privilege to visit The Royal Mint and see our coin being made’.

‘It humbles me greatly that the words that I coined for the brand … will be on an actual coin, opposite the Queen’, he said. 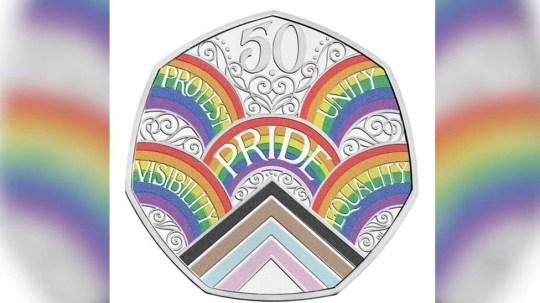 It has the words protest, visibility, unity, and equality inscribed on it (Picture: Royal Mint) 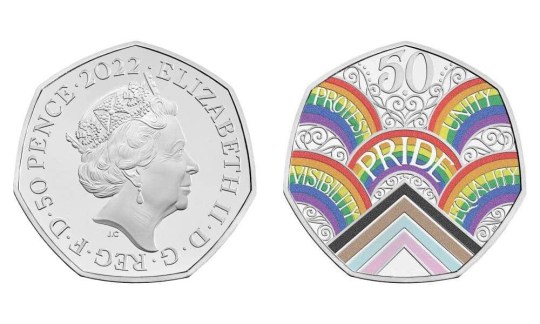 As usual, the Queen’s head is on the other side of the coin (Picture: Royal Mint)

‘This queer brown immigrant has come a long way, powered by hope, love and this city.’

Clare Maclennan, director of commemorative coin at The Royal Mint, named the 50th anniversary of Pride UK ‘a milestone celebration’.

She said: ‘This is the first ever UK coin dedicated to Britain’s LGBTQ+ community, with colour printing technology capturing the spirit of Pride UK with its iconic rainbow colours.

‘It was an honour to host representatives from Pride in London at The Royal Mint recently to strike their own coins as part of the launch and discuss with them our commitment to diversity and inclusion within the business and show how we are reinventing for the future.’