This video shows the moment Ukraine’s historic Palace of Culture was wiped out by a Russian missile strike in a matter of seconds.

Devastating footage shows the recently renovated building engulfed in flames after being hit with a rocket believed to have been launched from a strategic bomber.

President Zelensky condemned the attack, which happened in the Lozova region of Kharkiv.

He wrote on Facebook: ‘The occupiers identified culture, education and humanity as their enemies.

‘What is in the minds of people who choose such targets? Absolute evil, absolute stupidity.’


Image from a surveillance camera shows the moment a Russian missile hits the Palace of Culture in Lozova, Kharkiv Region (Picture: EPN) 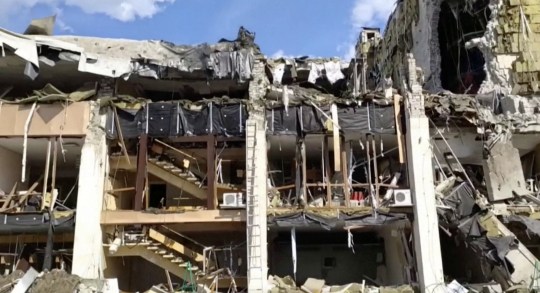 In the video, people can be seen going about their day around the cultural centre before it is suddenly blown up.

Two cars are driving past as a cyclist overtakes a pedestrian walking at a road side when the missile hits, sending up a massive plume of dust and smoke.

The Kharkiv branch of the State Emergency Service (SES) said seven people, including an 11-year-old child, were injured in the strike.

The building was partially destroyed and roof insulation was burned.

Lova’s Palace of Culture opened in 1977 and includes an auditorium, a lecture hall, three dance halls, a gym, and multiple rooms for classes and club meetings. 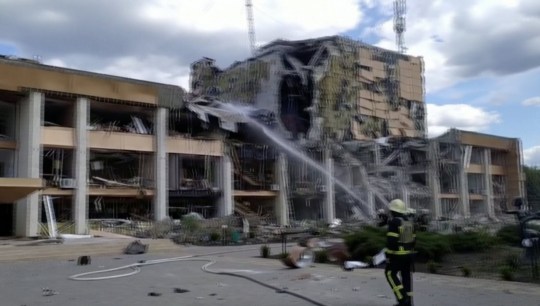 The building was partially destroyed and roof insulation was burned. 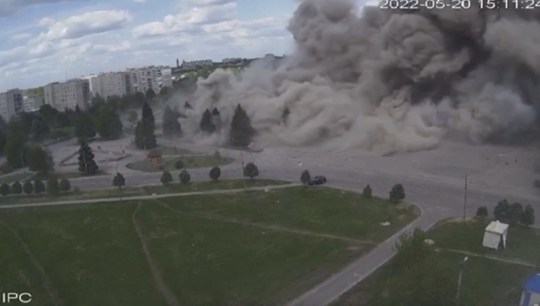 Seven people were injured in the attack

The strike comes as invading forces intensify their efforts to seize the east of Ukraine after capturing the strategic port city of Mariupol.

Kremlin forces continue to attempt a major offensive to take the entirety of the Donetsk and Luhansk regions after failing to capture capital city Kyiv.

Mr Zelensky maintained today that he was confident of victory but noted that it may not come on the battlefield.

‘We did not start this war. But we have to finish it,’ he said in a speech to mark his three years as president.

‘Victory will be bloody in battle. But the end will be in diplomacy. We want everything back. Russia does not want to give anything away.’