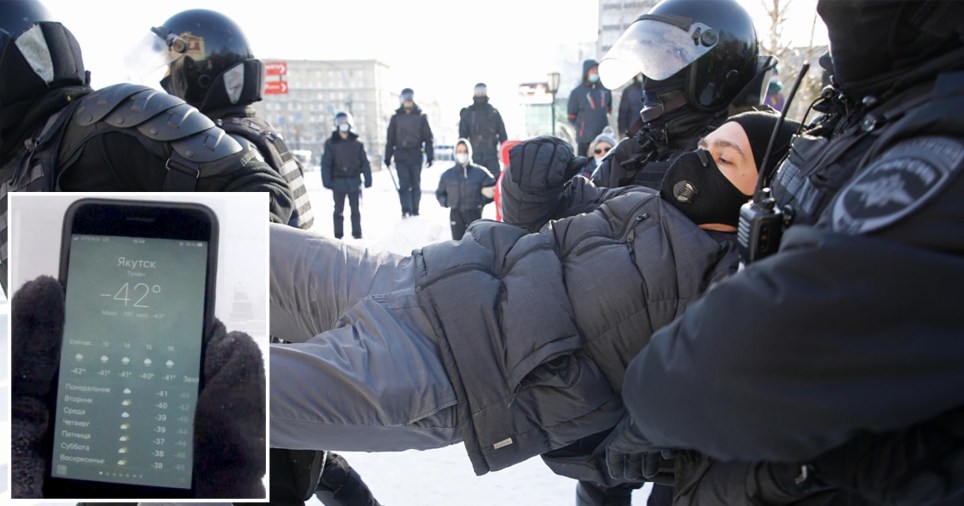 More than 4,000 protesters all over Russia have been arrested today (Picture: Getty)

Russians went out in unimaginable -41C temperatures to continue to protest against the arrest of Vladimir Putin critic and anti-corruption activist Alexei Navalny.

Protests demanding Mr Navalny’s release were called for in 142 cities across the country’s 11 time zones on Sunday, in some of the most widespread acts of outrage the country has seen in years.

Russians have been marching across the country since Mr Navalny, 44, was arrested on January 17 when he returned to Moscow from Berlin, where he had been receiving treatment after being poisoned with a Novichok nerve agent. He blames the attack on the Kremlin, which Russian officials have denied.

The opposition leader was arrested in connection with a 2014 embezzlement case but he claims the charges are made up and politically motivated, as he looks to win political power in the upcoming parliamentary elections in September.

More than 1,600 people, including Mr Navalny’s wife Yulia, have been arrested, according to OVD-Info, a group that monitors political arrests. It comes after almost 4,000 were reportedly arrested on January 23.

In Yakutsk, dubbed ‘the world’s coldest city’, protests went today ahead despite the bone-chilling temperatures that dropped to -41C.

About 1,800 miles away, protesters held hands and danced in a circle, shouting ‘Putin is a thief’ and ‘shame shame shame’ on the frozen ocean of Amur Bay, near Vladivostok. 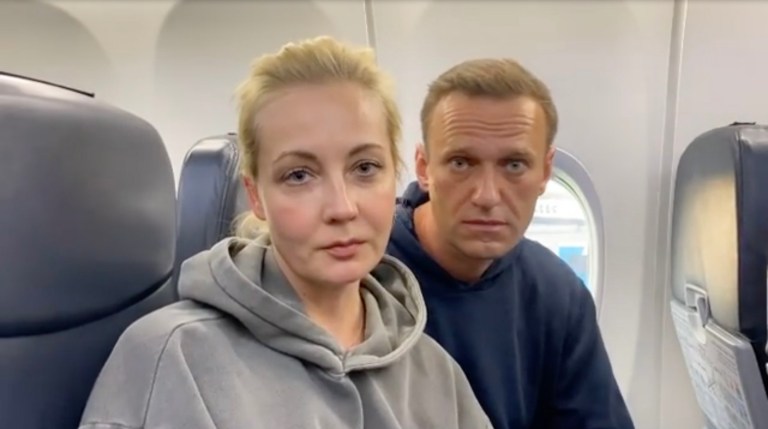 Alexei Navalny and wife Yulia Navalnaya on their flight from Germany back to Russia (Picture: EPA) 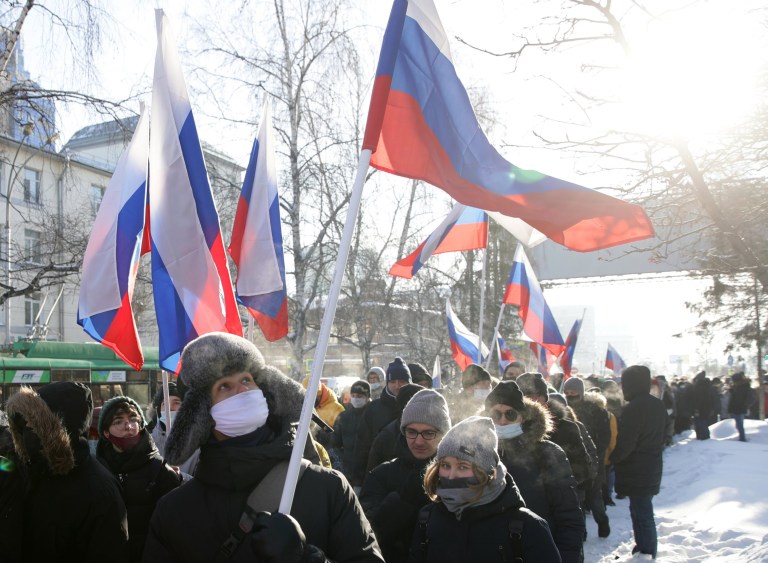 People with Russian national flags take part in an unauthorised protest in support of the detained opposition activist (Picture: TASS/Getty) 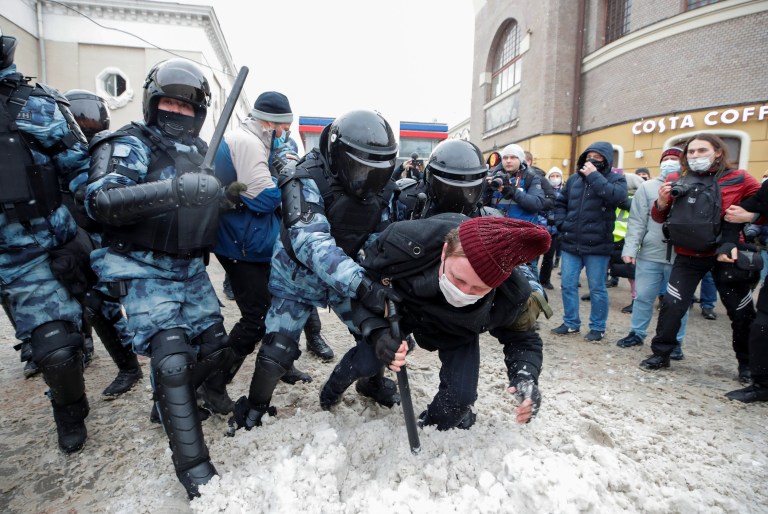 Law enforcement officers detain a man during a rally in Moscow (Picture: Reuters)

Footage from this morning showed a law enforcement boat breaking down while it was trying to chase demonstrators on the frozen sea. More than 100 people were arrested.

The chants referred to an opulent Black Sea estate reportedly built for President Putin that Mr Navalny’s team have released a popular video about.

There has been a strong police presence at all protests with the army reportedly called to support them in St Petersburg, where Putin lives.

Demonstrations also went ahead in eastern parts of Russia with more than 500 people being arrested. 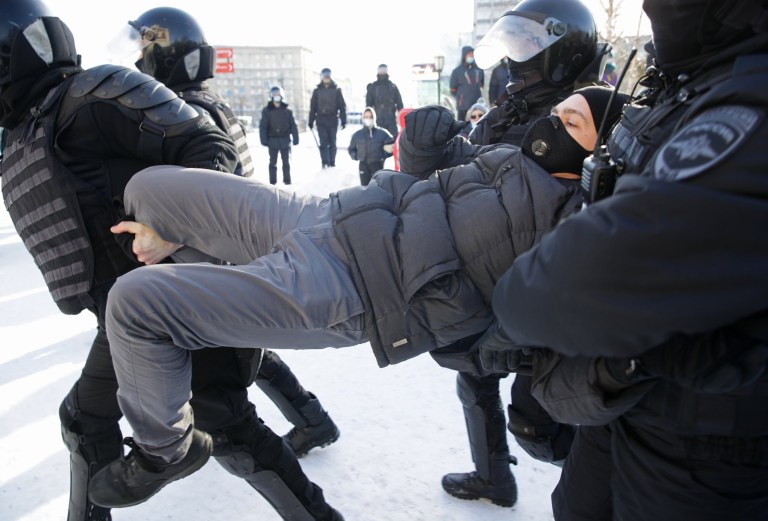 Protesters in Novosibirsk were not deterred by the riot police in Serbia (Picture: Getty Images) 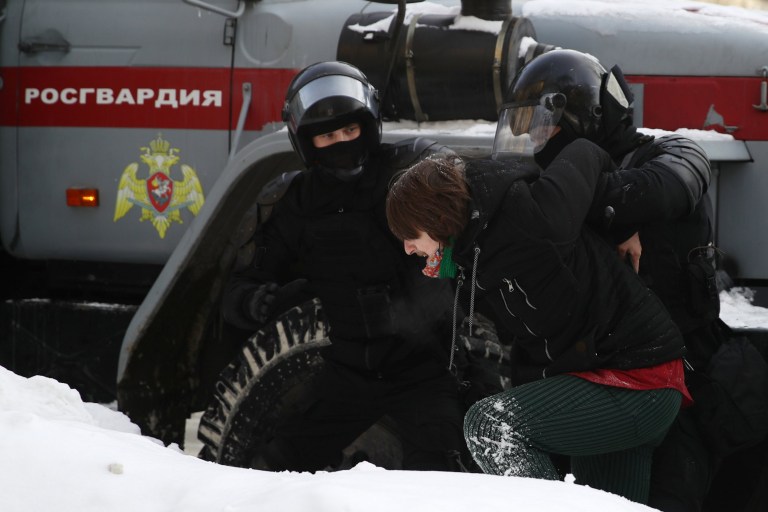 Russian law enforcement has been criticised internationally for its brutality towards demonstrators (Picture: Getty Images)

Last week saw protests in the Russian Far East and Siberia but a new riot police presence seems to have scared people into staying at home.

Navalny-supporters also braved the -31C in Krasnoyarsk where they performed traditional folk dances despite armed police around them.

Russian law enforcement has been criticised internationally for the brutality with which it has handled protestors. 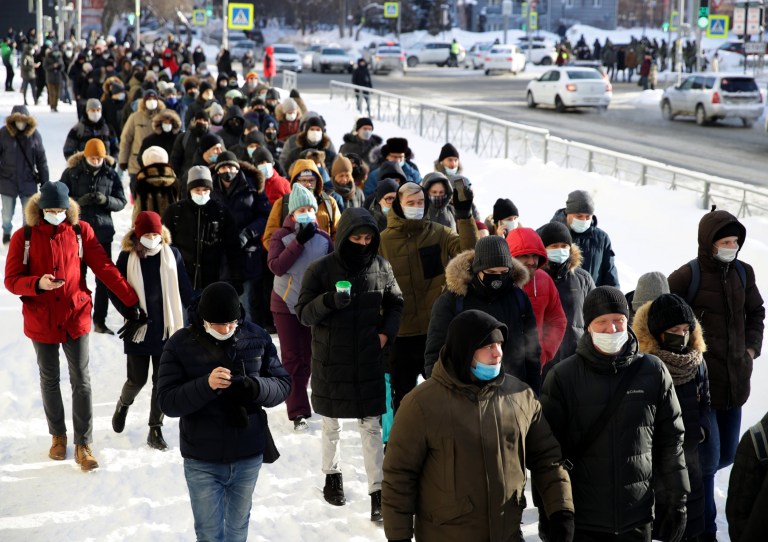 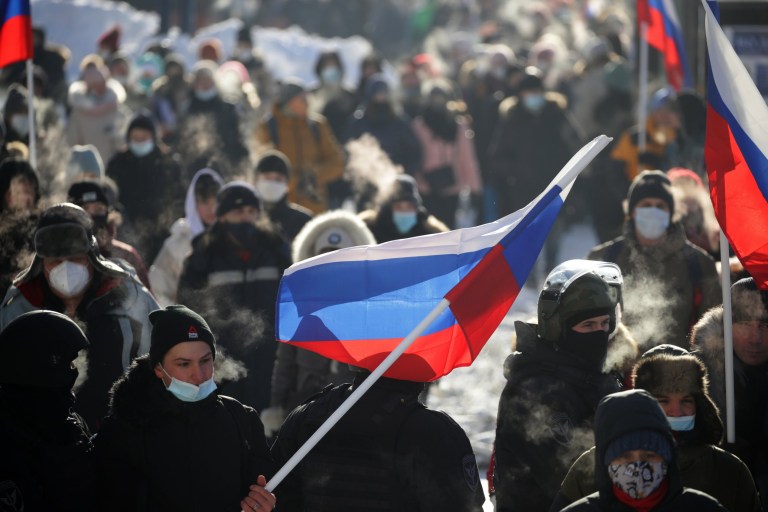 Thousands have been arrested during the protests (Picture: Getty)

They have piled up snow and chopped trees to block protestors, kept cells on wheels with them to quickly arrest people, used tear gas in some cases and have been filmed aggressively manhandling reporters and demonstrators.

Police were even filmed trying to crush protesters in Moscow, St Petersburg and Vladivostok.

Prosecutors also demanded that social platforms block the calls for joining the protests on the internet.

The Interior Ministry has issued stern warnings to the public not to join the protests, saying participants could be charged with taking part in mass riots, which carries a prison sentence of up to eight years.