A Scarborough joke shop customer was less than happy when they realised they hadn’t found the magic money tree after all (Picture: Google/Scarborough Joke Shop)

A hopeful customer who thought he could purchase a machine that prints money from a joke shop was left sorely disappointed by his purchase.

The American ordered a ‘magic money maker’ online, a toy which promises to ‘change paper into money’ and is favoured by young magicians.

The owner of the Scarborough Joke And Magic Shop was surprised to find an angry review from a disgruntled punter who must have thought they had unearthed the secret to limitless wealth.

An angry message on Trustpilot described the £4.99 contraption as an ‘outright joke’ and complained it ‘does not do anything to copy money’, decrying it as ‘a complete waste of time’.

They also appear to have been taken in by tongue and cheek reviews claiming the device ‘paid their rent and bills.

The furious patron wrote: ‘I lost $55.00 purchasing 5 of these money makers and went to the post office to return the items and it would cost me $60.00 to return…it’s not real, it is fake and you will do nothing but roll your money around the black cylinders and that’s it.’

Show owner Miles Jackson told The Telegraph and Argus: ‘We have literally sold hundreds of this item over the years. They are very popular with beginner magicians as they are very easy to perform. 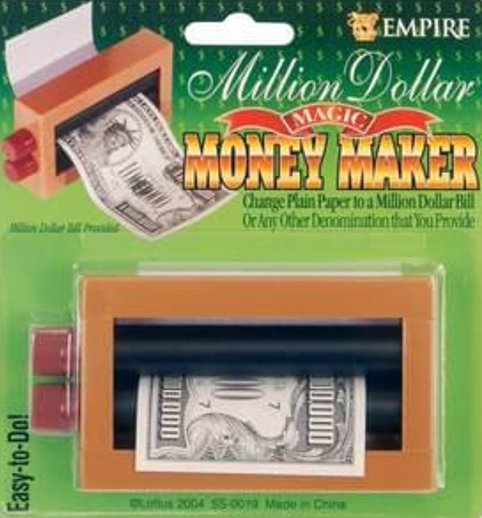 If this thing worked there’d be no cost of living crisis (Picture: Scarborough Joke Shop)

‘I did initially receive an email from this customer stating that they “were not 100% completely satisfied with the product, and want to return”, which of course I agreed to, not knowing the issue they had with it.

‘I was completely surprised and bewildered when instead I received the one-star review on Trustpilot.

‘My main surprise was that they truly thought they were going to be able to print real money from a £4.99 trick.

‘And rather than send the item back for a full refund, they thought it necessary to warn other people by leaving a negative review.’