Scotland: Nicola Sturgeon tests positive for Covid-19 and is isolating

Ms Sturgeon tweeted she had been experiencing mild symptoms this evening, after meeting with Sinn Fein’s Michelle O’Neill in Edinburgh earlier today.

She will work from home over the next few days and told followers she would ‘hopefully’ be back out and about later next week.

‘In line with @scotgov guidance, I’ll work from home over next few days, and hopefully be back out and about later next week.’

Both politicians represent parties seeking to break away from the UK, with Ms Sturgeon pushing for independence and Ms O’Neill seeking a united Ireland.

They both seek to hold a referendum in the coming years, arguing that the Brexit vote has changed the situation for their countries which wanted to remain in the EU.

Unfortunately Iâve tested positive for Covid this evening after experiencing mild symptoms. In line with @scotgov guidance, Iâll work from home over next few days, and hopefully be back out and about later next week. 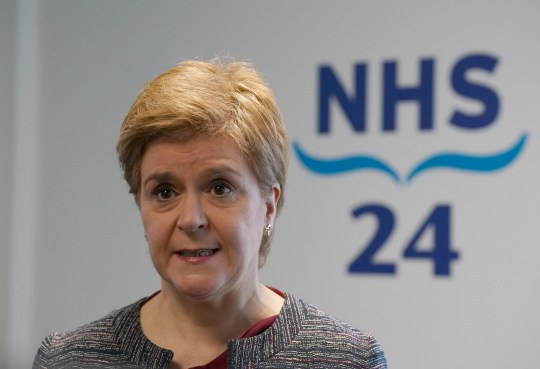 Nicola Sturgeon during her visit to an NHS centre in Glasgow on May 9 (Picture: PA)

Ms Sturgeon shared a photograph of the two meeting without wearing masks at Bute House, saying they ‘discussed shared areas of interest including the cost of living crisis, the importance of the Northern Ireland Protocol and prospects for a new Northern Ireland Executive’.

‘The historic bonds between Scotland & the island of Ireland go back centuries. We enjoy a long & enduring affinity as neighbours & friends. Moving forward we will strengthen the bonds that tie us.’