A MUM has claimed a selfie-obsessed painter left her house in a state after he spent time posing for Facebook snaps – even taking a picture of himself on her sofa.

Jessica Burton claims a painter left her house in a mess after taking selfies on her sofaCredit: Kennedy News 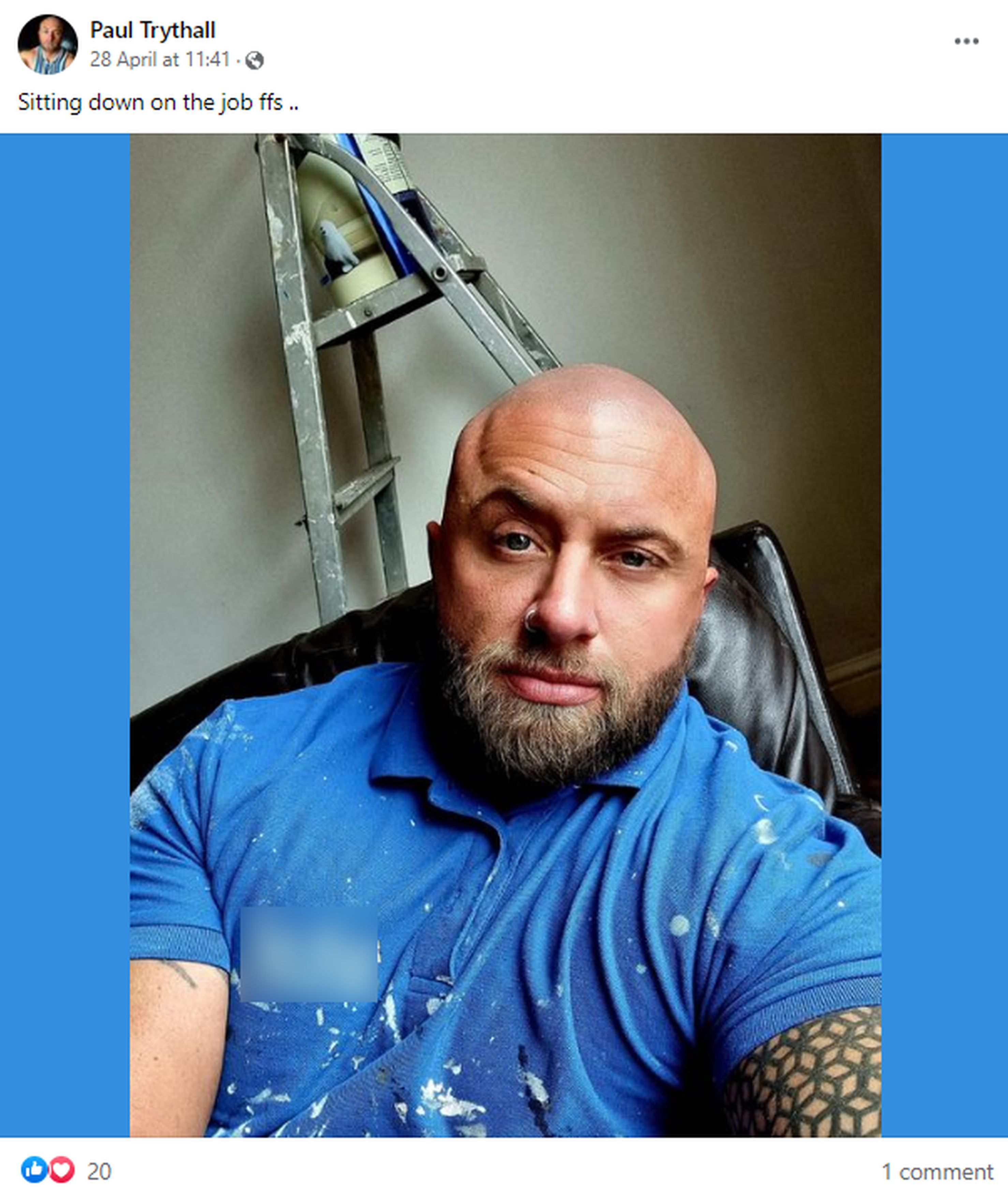 She claims the tradesman failed to show up for work for three days and ignored her calls and texts when she tried to contact him.

The mum-of-four also noticed he’d taken a selfie from her black leather sofa – boasting he was “sitting down on the job ffs” while covered in splatters of paint.

Jessica has since said her house was left “a mess”, forcing her to fork out £200 for another painter to finish the job.

But Paul insisted he was not fully paid for the job and said he had good reason for having to cancel last minute when he did. 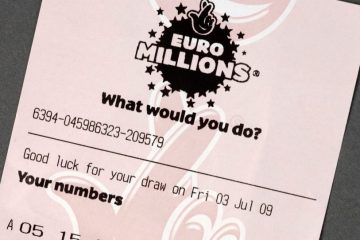 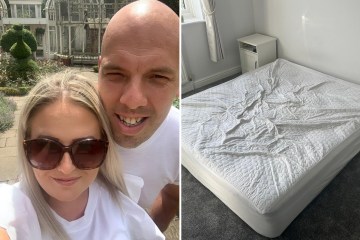 “While he was there, he was uploading selfies while I was in the next room saying ‘sitting down on the job’. He was sat on my sofa covered in paint – I thought it was really cheeky.

The mum added: “I saved really hard for it and I just thought I’d be done like he said in those couple of days. Over a week later, me and my children couldn’t sit down. It was a mess.

“The photos I have of the work are absolutely shocking. You would never leave someone’s home like that even if you weren’t a professional.”

After leaving on the Thursday, Jessica claims Paul made his excuses not to work on Friday and Saturday.

She said she “got up at the crack of dawn” on Saturday and wen she “eventually got hold of him he said ‘something’s come up with [a family member] but I’ll be there this afternoon’.”

Jessica said there was no sign of Paul when she waited for him, but he “promised he’d be there on the Sunday”.

“I got up Sunday, waited, rang and text,” she explained.

“I couldn’t get anything out of him but he had the cheek to put a post on Facebook of him in bed saying ‘I’ve done f*** all all day’.”

I got up Sunday, waited, rang and text. I couldn’t get anything out of him but he had the cheek to put a post on Facebook of him in bed saying ‘I’ve done f**k all all day’.

The mum claims she was so upset at her home being left in a mess that she broke down in tears in front of a carpet fitter who had popped over with samples.

And the next day, she claims Paul arrived to work but was annoyed that another tradesman who the carpet fitter called had used his gear and eventually left before Jessica believed the job was finished.

She said: “He hadn’t painted any of the ceilings up the stairs like we agreed, my banister was half painted. The photos are shocking.

“He sanded the ceiling over a freshly glossed bannister so there was all bits stuck to it.

“He told me I needed three tins of paint, he only used one. He’d barely given it a coat.

“There were parts of the walls that had the old colour on. There wasn’t a single wall there that was finished – nothing.”

Jessica says she has since had to pay another tradesman to finish up the work.

But when approached for comment, Paul said he was made to “feel terrible” after Jessica refused to leave him alone in the house.

‘I GENUINELY COULDN’T MAKE IT’

He also claims he was only paid £200 and after finishing the job, waited around outside Jessica’s home for 15 minutes before leaving, realising he wouldn’t be paid the rest of the money.

The painter said: “She didn’t [fully] pay me for the job. She paid £200 of it the week before even after paying what she was happy with as she checked the standard of work up to that point. If she wasn’t happy she wouldn’t have paid half.

“I then said I’d work the Friday or the Saturday I think it was, but I genuinely couldn’t make that day if I wanted to as something came up.

“With that she had someone else to paint the rest – even using all my own tools and materials without confirming it with me first. Then she wants me back as that other person only did so much for her because of the price.

“I then went back and noticed the other person, which she even agreed wasn’t a trained painter, had left all run on the bottom bannister which I had to sort.”

‘I COMPLETED THE WORK’

Paul said he “completed the work” but the “only reason she wasn’t happy [was because] she thought the parts I filled and sanded on the ceiling were still noticeable but they weren’t”.

He explained: “It was that the paint was still wet and I can assure you when it dried it would have been pure brilliant white like the rest of the ceilings.

“I have pictures of the finished job from me. I suspect she didn’t have the money, this is what all this is over.”

Paul added that on his first hour of the job he was “made to feel really uncomfortable” after he made small talk with Jessica, asking her what she was up to that day.

He said she replied “saying ‘no I won’t dare let you alone in my house’.”

The tradesman added: “It made me feel terrible if I’m honest as [if] I was untrustworthy. Maybe she worded it wrong, I don’t know.

“On my last day there she was great, I did say in the morning that I wasn’t happy with the other person using my materials but five minutes after that everything was great.

“She even came back, we were speaking as you do and she was making coffee etc and was happy as far as I thought.

Paul insisted: “I’m good at my job, I work quick, so I’m entitled to sit down whenever I feel. Anyone else would have taken about six or seven days to do that work.

“I would have completed in two to three days but when she said about not leaving me in hers alone it hit me right off balance.” 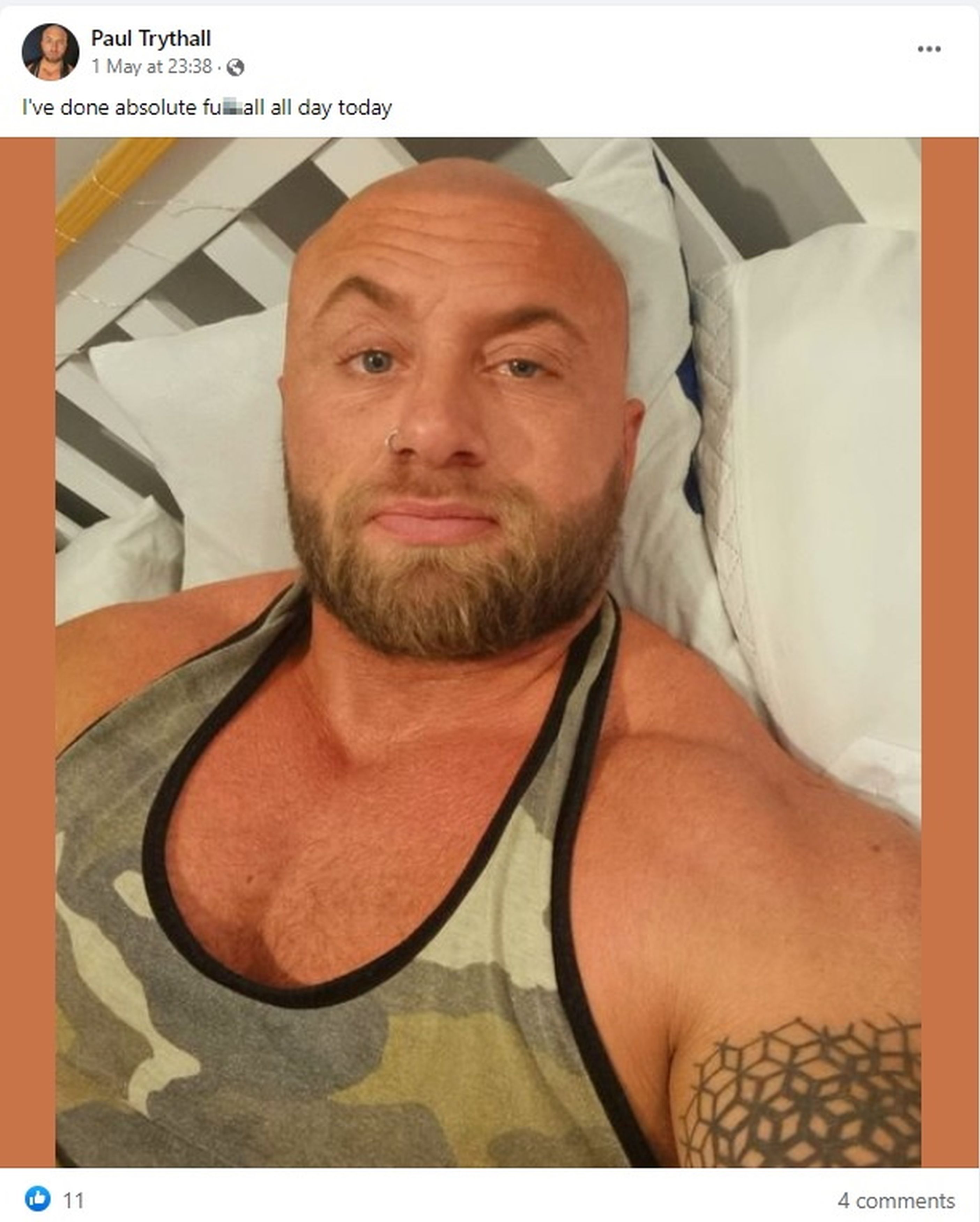 On the Sunday he cancelled at Jessica’s house, Paul posted a picture saying he had ‘done f*** all’Credit: Kennedy News/Paul Trythall/Faceb 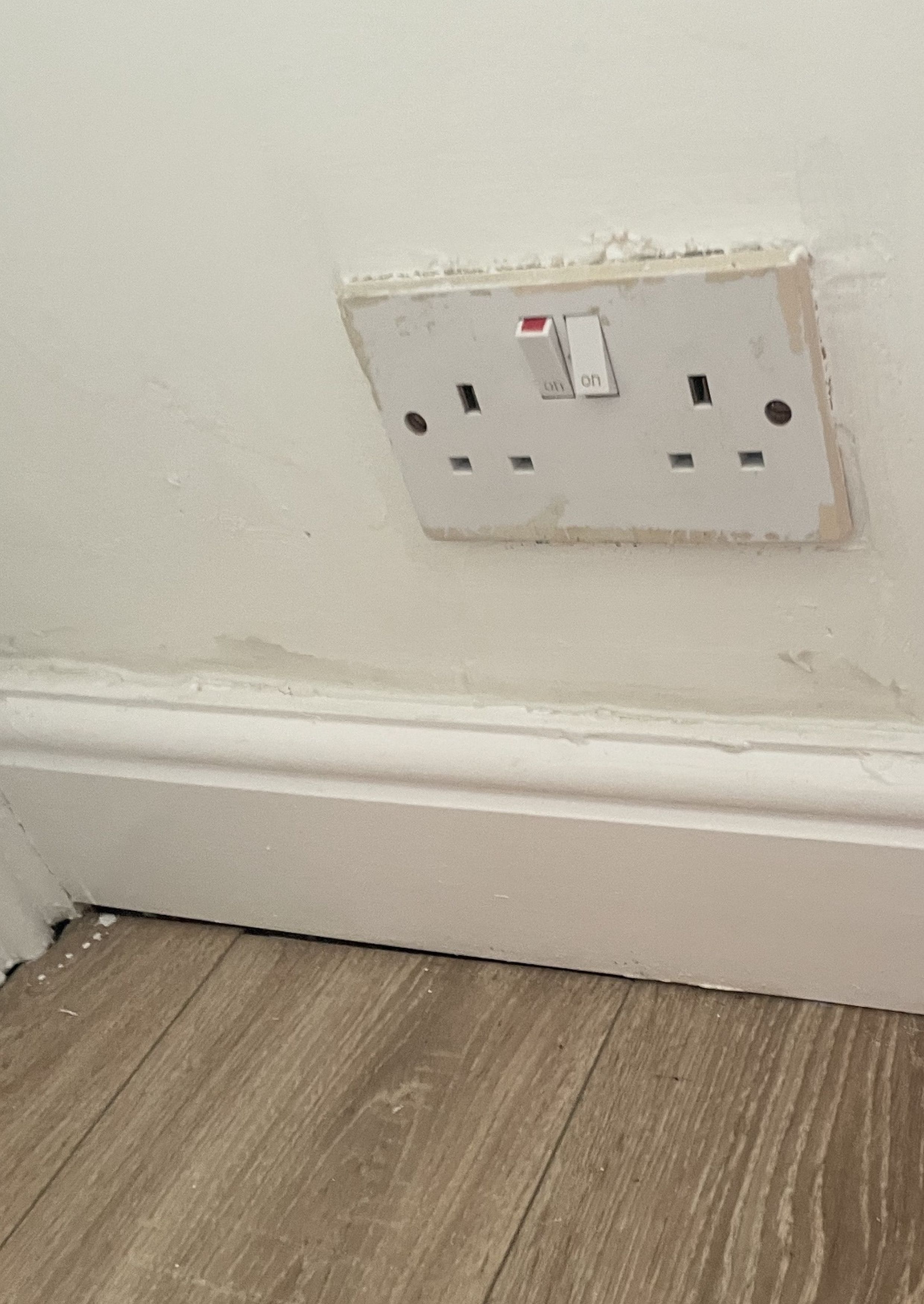 Jessica was not happy with the paint jobCredit: Kennedy News 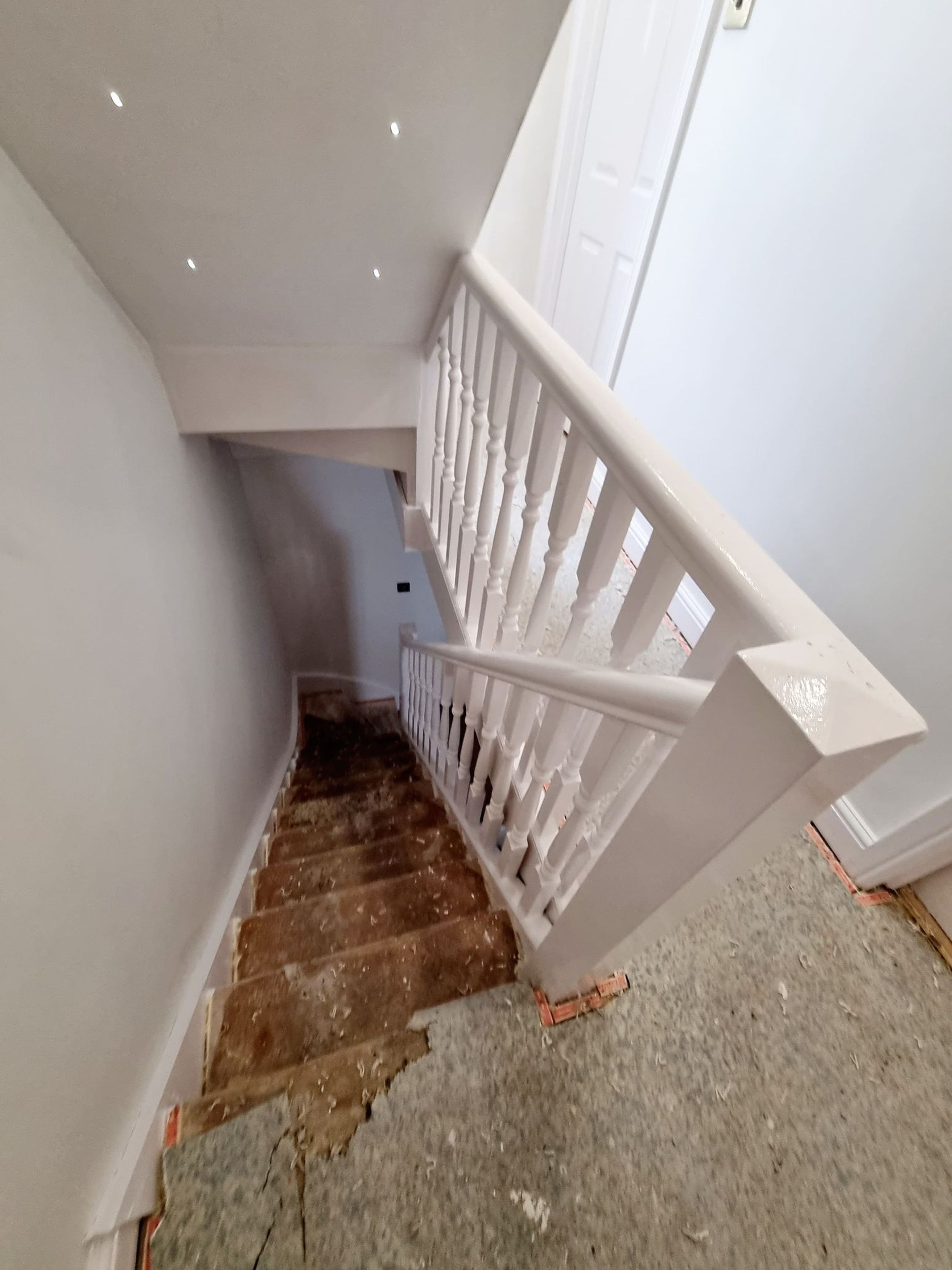 She said he sanded the ceiling over a freshly glossed bannister so there were ‘bits stuck to it’Credit: Kennedy News 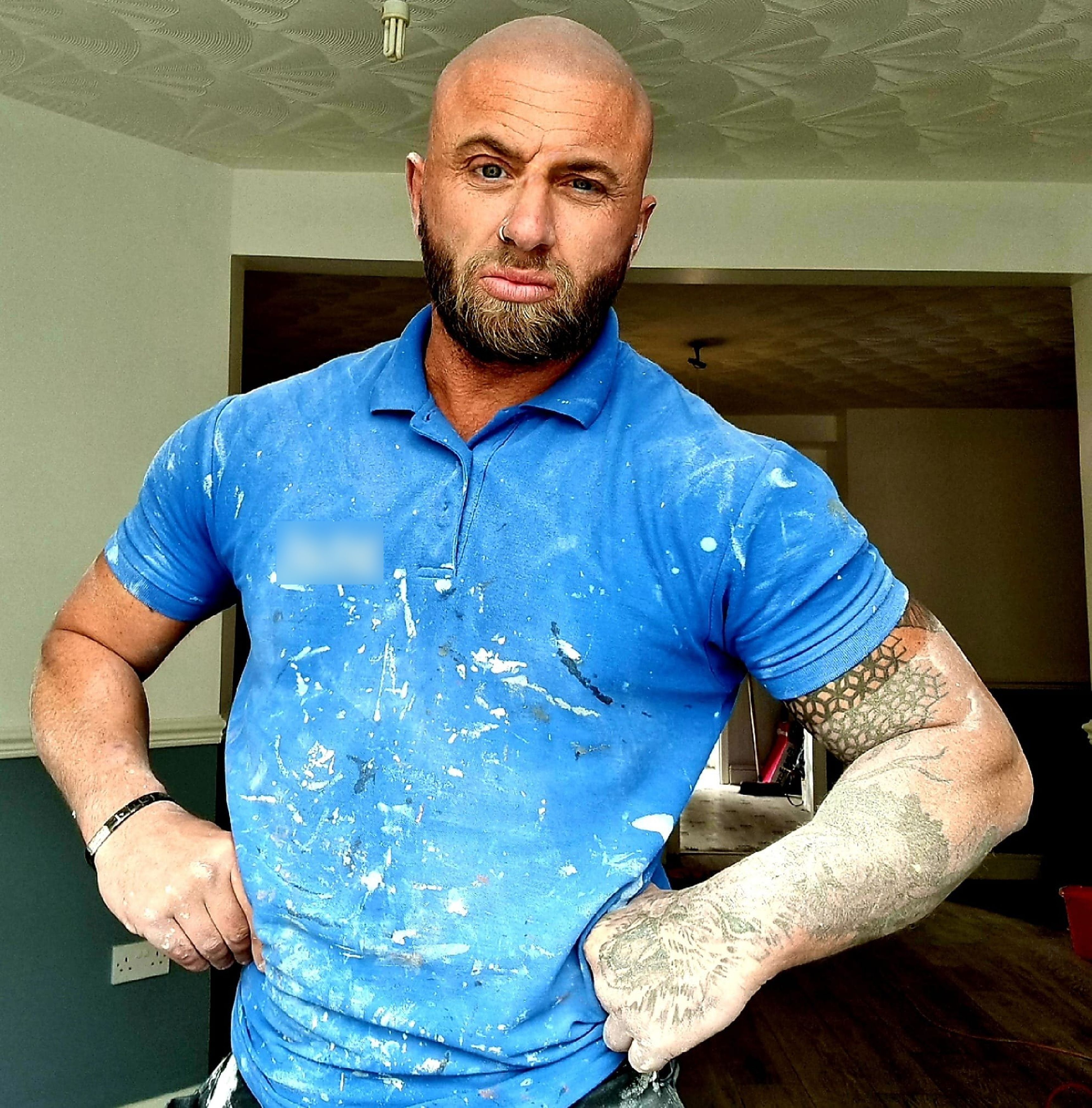 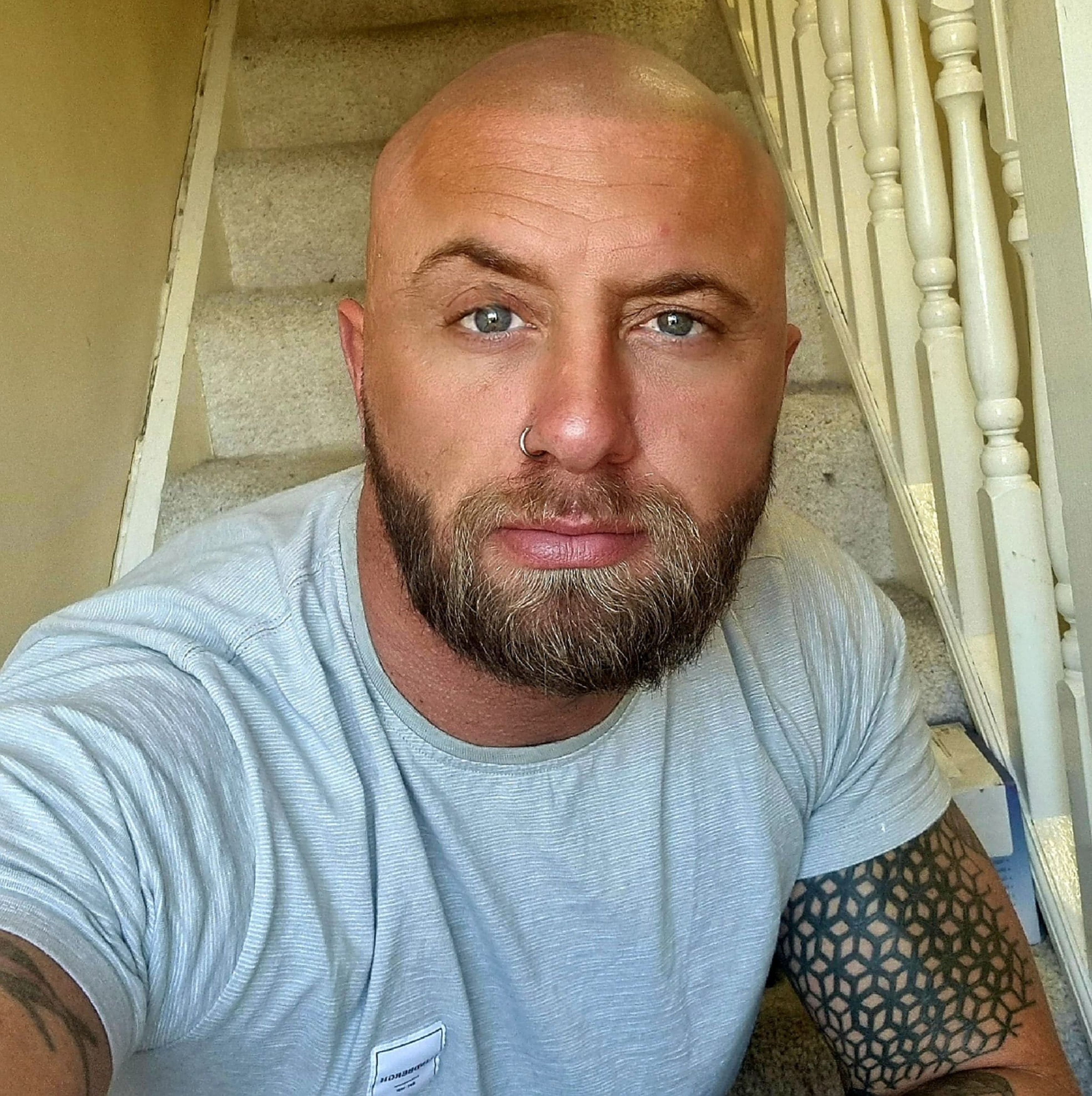