THIS is the shocking moment a man clambers up BBC Broadcasting House to smash a statue by a paedophile sculptor.

Pictures show the man attacking the statue called Prospero and Ariel by Eric Gill which is above the entrance to the corporation’s headquarters in central London.

The man claimed the statue by Eric Gill should have been removed long agoCredit: Gary Stone 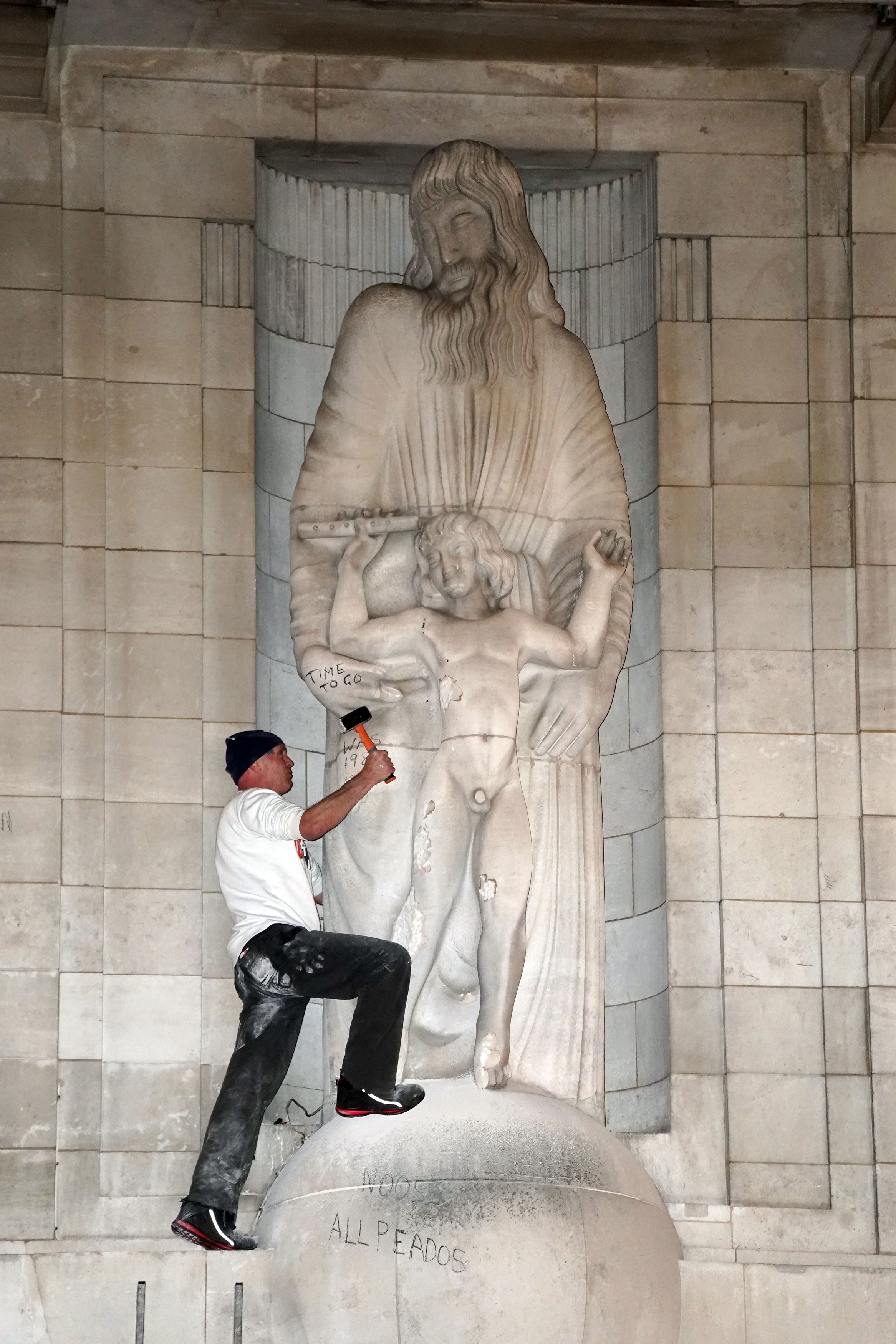 The man can be seen bashing away at the statue with a hammerCredit: PA 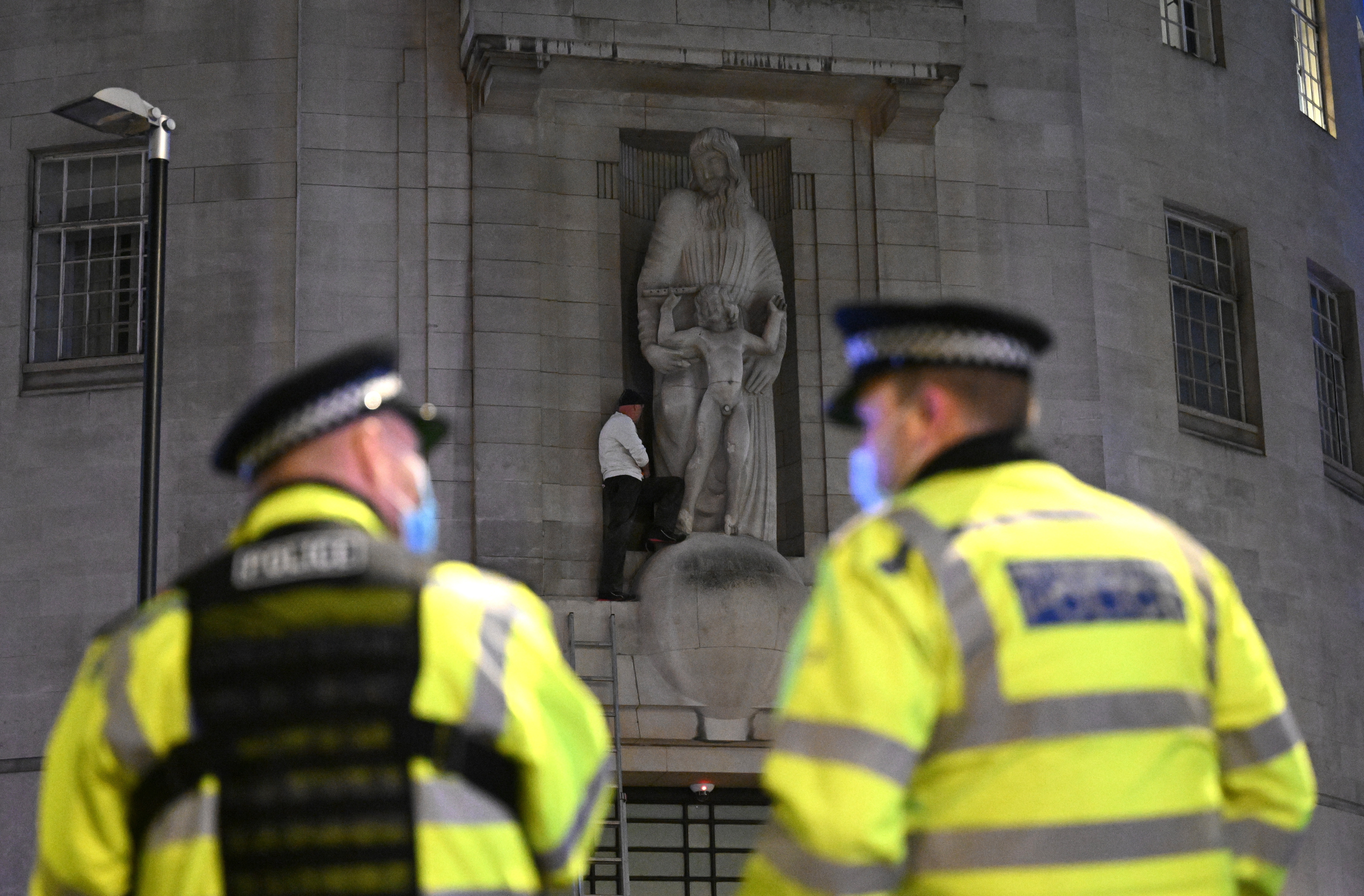 Cops say the situation is ongoing and they have attempted to negotiate with the manCredit: Getty

Campaigners have requested the statue be removed after it was revealed Gill sexually abuse his two eldest daughters.

The man, wearing a Reservoir Dogs t-shirt can be seen hammering away at the statue, taking out chucks of stone.

The situation is ongoing, according to the Met Police, and they are trying to engage with the man.

At one point the man told negotiators the statue should have been taken down previously.

He told negotiators: “If this happened decades ago, I wouldn’t be here would I?”

The incident comes just a week after four people were cleared by a jury of criminal damage even though they pulled down the statue of slave trader Edward Colston in Bristol.

Met Police said they were called at around 4.15pm this afternoon to Broadcasting House in Portland Place, after a man used a ladder to reach the statue which is above the building’s main entrance.

Cops have cordoned off the area and paramedics from the London Ambulance Service are also in attendance.

A Met spokesman said: “Officers attended and remain on scene attempting to engage with the man.

“Another man has been arrested on suspicion of conspiracy to commit criminal damage.

The sculpture, showing Prospero and Ariel from Shakespeare’s play The Tempest, was installed in 1933, according to the BBC.

A petition to get the sculpture removed on the 38 Degrees website previously gained nearly 2,500 signatures.

The BBC declined to comment when contacted by The Sun Online.

Owen King, 52, who was cycling past when he saw the man chipping away at the statue, said: “I saw all the police and I presumed he was protesting about Eric Gill and his background. Then the fire brigade were here as well. People are just wondering, ‘why don’t they take him off the sculpture?’

“So I think they’re just waiting for him to come down. He’s got this tiny little hammer and he’s bashing away at the leg there. Not much is coming off and he seems to be resting a lot.”

He added: “Someone shouted to him, ‘get off it, you ugly person, an ugly person desecrating a beautiful thing’. And he shouted ‘you paedo’. And then everyone was laughing at him. I think you (should) separate art from the person.”

Shortly after one woman, who was walking past, yelled: “Art should be separated from the person. You should spend your energy and time with something else. Art can be beautiful by itself.”

It is understood that another man who live-streamed the incident on social media before police intervened was later arrested.

At the time of his death in 1940 Eric Gill was a highly respected artist but his diaries, which were published in 1989, revealed he regularly abused his daughters Betty and Petra, as well as the family dog. 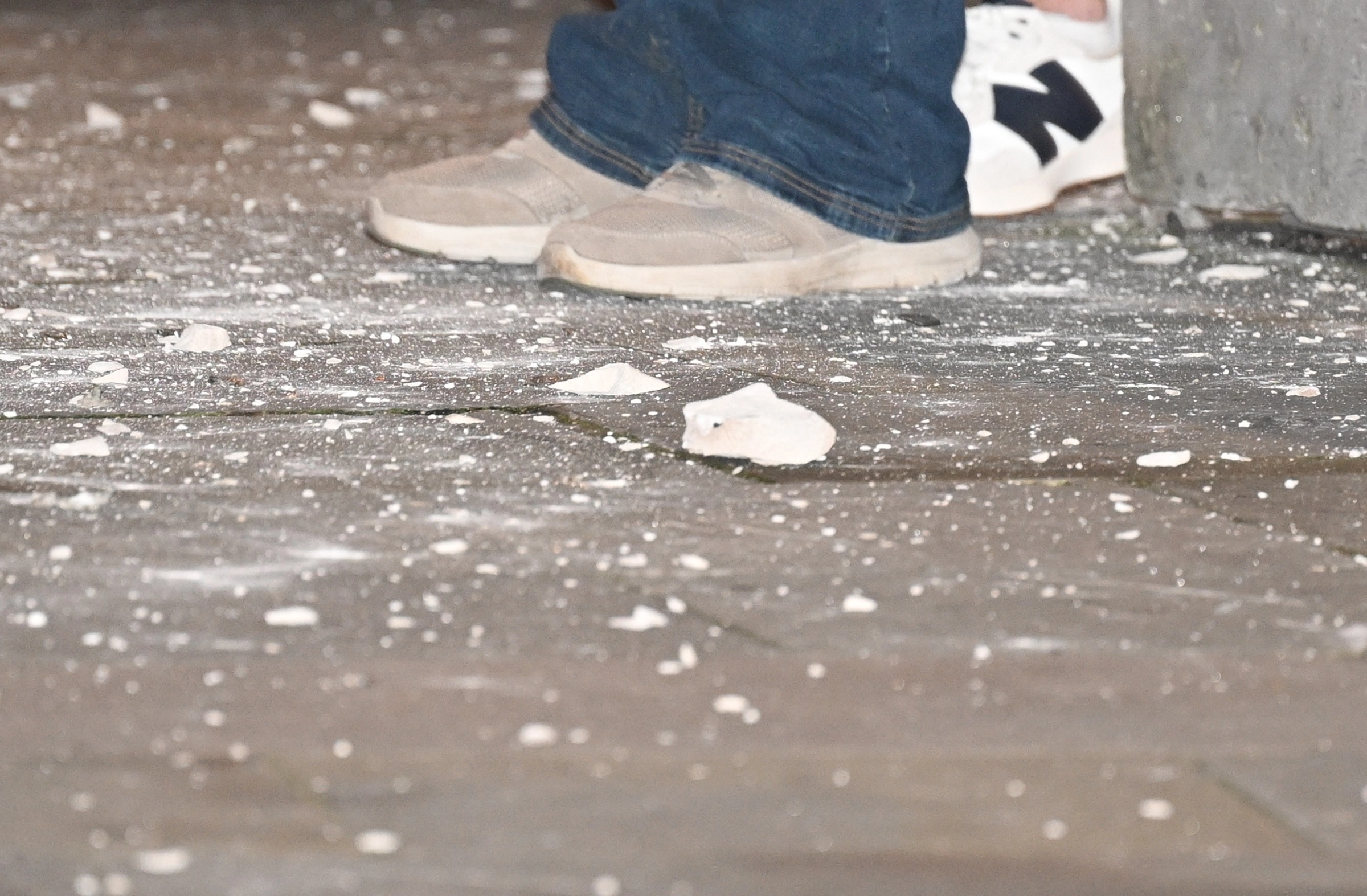 Pieces of stone that have been chipped away can be seen on the pavementCredit: Getty 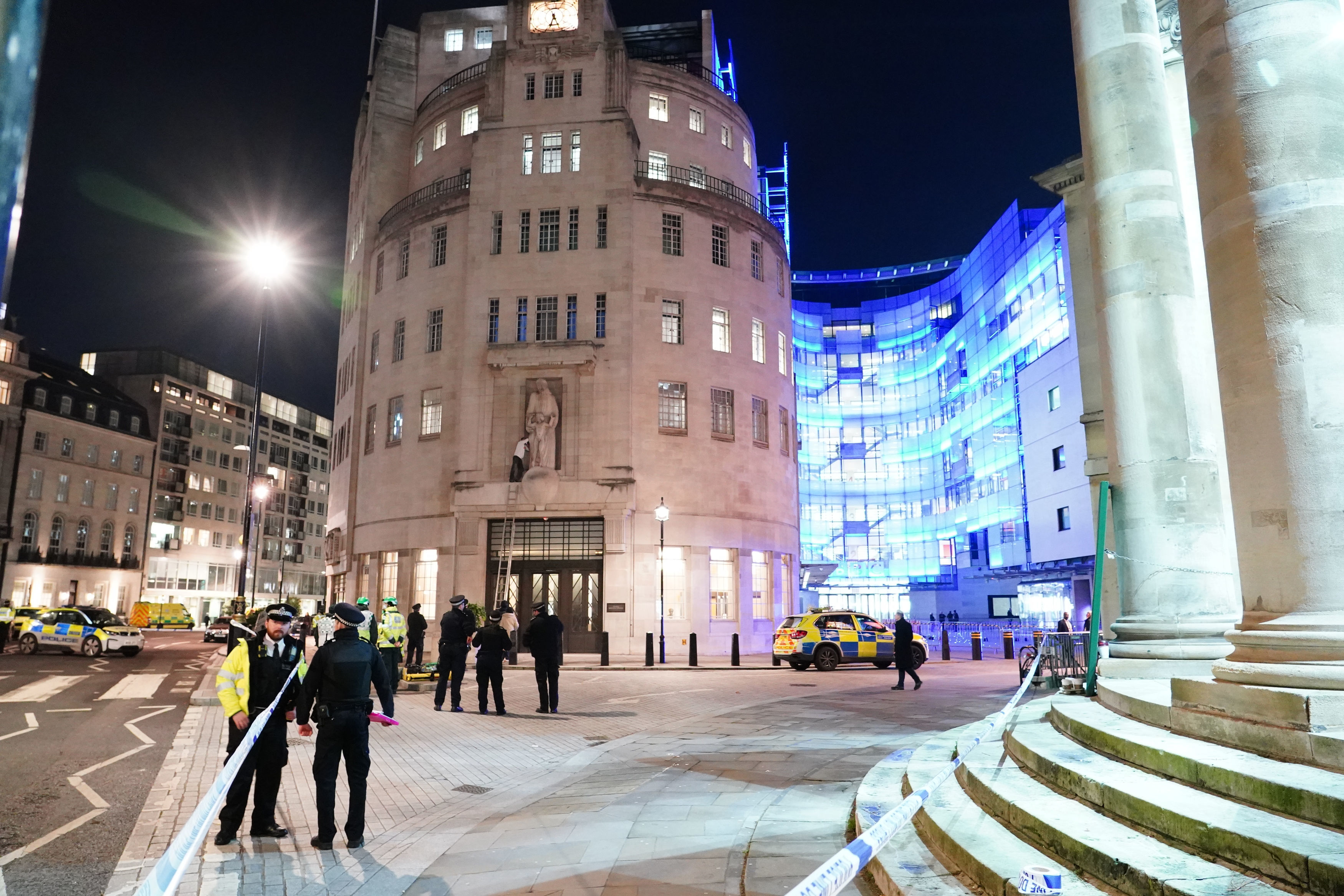 Police have cordoned off the area outside Broadcasting HouseCredit: PA 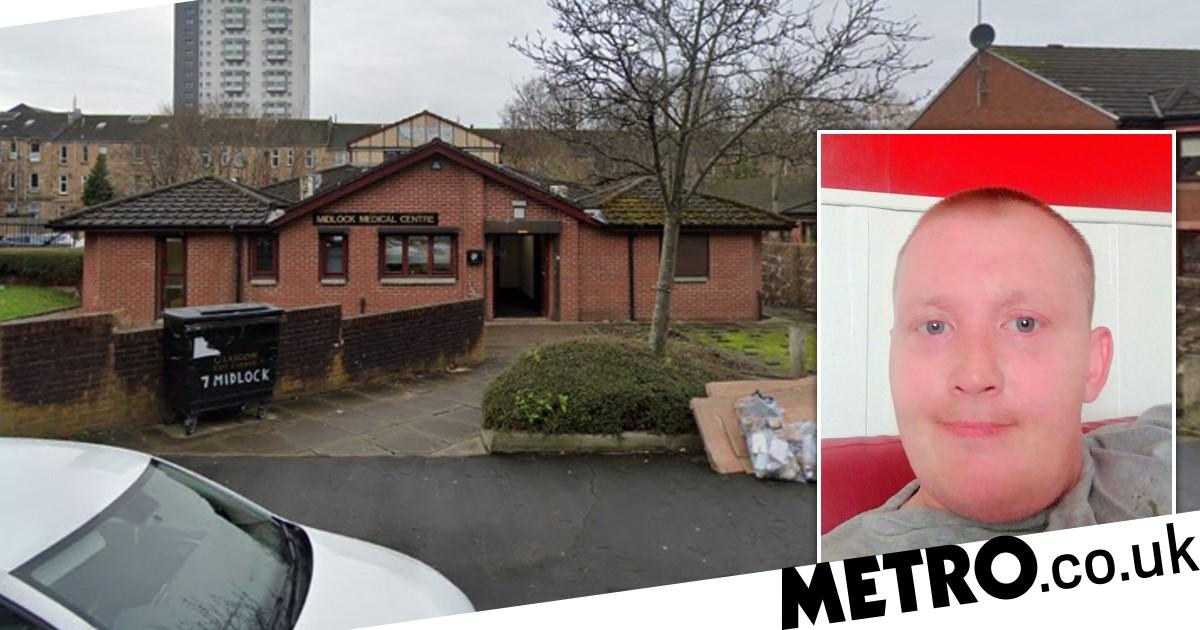