Smoke from dozens of blazes in the western USA is now coming to the aid of firefighters battling the mounting devastation across the region.

Fumes pouring into the air have been providing ‘smoke shade’ in some areas – which provides cooler conditions and temporarily blocks the sun.

That has allowed an army of firefighters to gain ground on the country’s largest blaze in Oregon, though elsewhere the scene is far bleaker.

California’s largest wildfire tore through a tiny neighbourhood on Saturday, destroying homes and livelihoods as various blazes continued to devastate the west.

The Dixie fire had already levelled more than a dozen homes and other buildings before reaching the Indian Falls community.

It is one of more than 85 blazes wreaking havoc in the country – mostly in the western region – with thousands of homes under threat and a state of emergency declared in parts of California.

The active fires have so far burned 1.4 million acres of land across the USA, as an army of firefighters battle another devastating fire season worsened by the climate crisis. 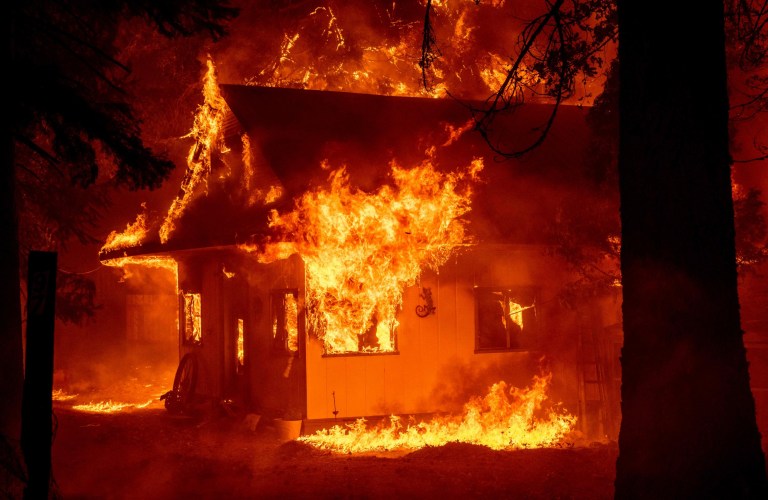 The Dixie tore through Indian Falls on Saturday (Picture: AFP) 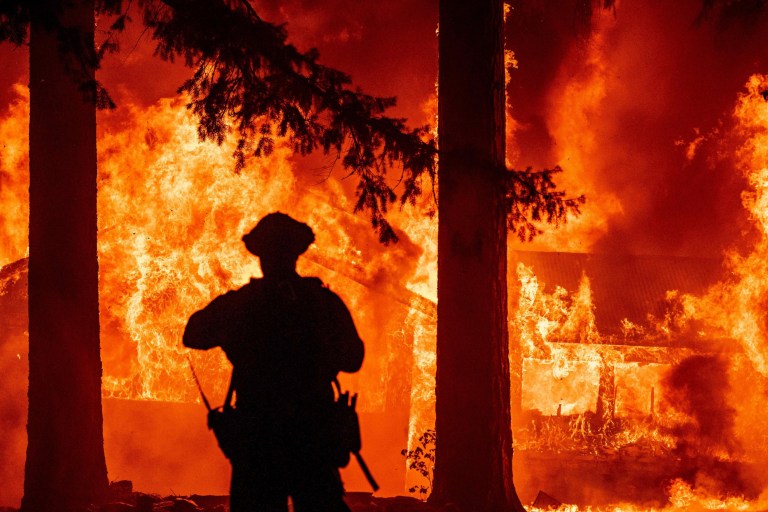 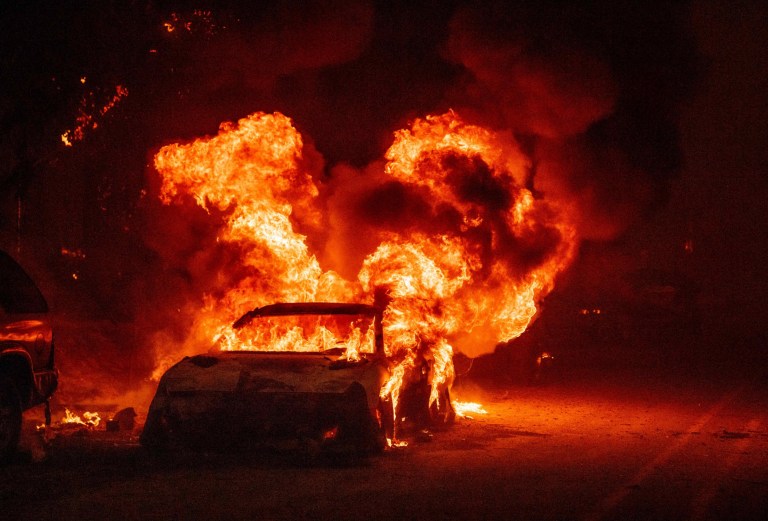 A Corvette explodes as flames from the Dixie fire batter communities (Picture: AFP)

Dixie, which ignited on July 14, was burning in a remote area where firefighters struggled to gain access as it charged eastwards.

It was burning in a remote area where firefighters struggled to check its advance eastwards, after so far scorching more than 181,000 acres in Plumas and Butte Counties.

Residents in several small communities and along the west shore of Lake Almano have been told to evacuate, though others across the region have ignored similar orders.

The huge amount of smoke emitted across the region has helped firefighters slow the growth of the sprawling blaze – one of the largest in the state’s history – but authorities remain fearful about its progress. 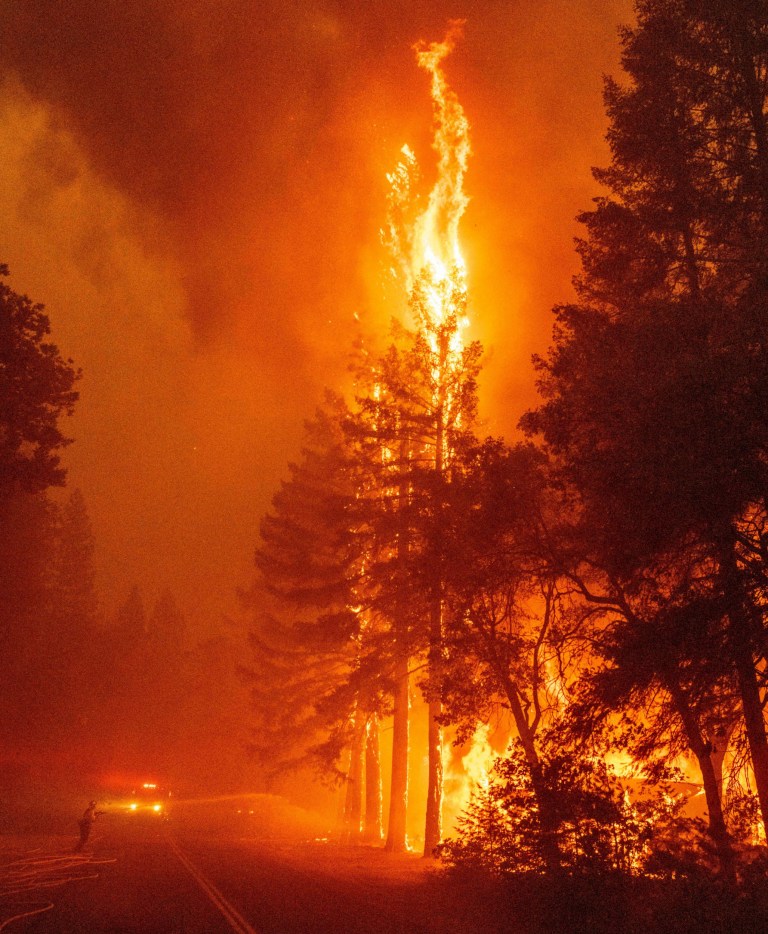 A firefighter sprays water at a burning home as flames climb up a huge tree (Picture: AFP) 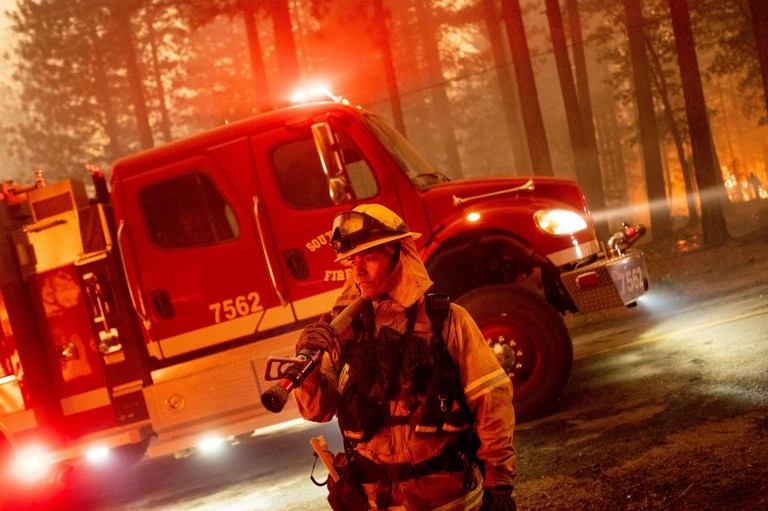 Firefighters across the western USA are battling dozens of huge fires (Picture: AP)

Jim Hanson, a fire behaviour analyst from the Oregon Department of Forestry, explained: ‘This fire is resistant to stopping at dozer lines.

‘With the critically dry weather and fuels we are experiencing, firefighters are having to constantly re-evaluate their control lines and look for contingency options.’

In California, Governor Gavin Newsom declared a state of emergency for four northern counties because of wildfires that he said were causing ‘conditions of extreme peril to the safety of persons and property’.

Climate change has been blamed for worsening the conditions needed to start and fuel fires – with manmade global warming making the US West much warmer and drier over the past 30 years.

Elsewhere, hundreds of homes are threatened in north-central Washington, where firefighters are battling two blazes in Okanogan County which caused hazardous air quality conditions on Saturday. 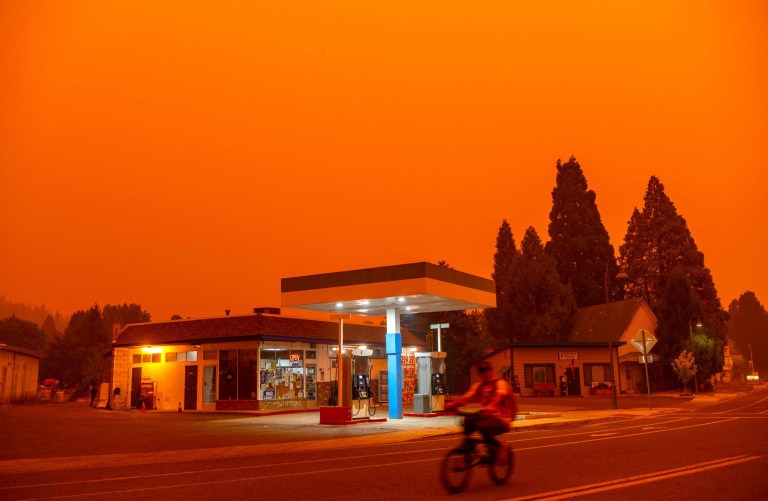 Air quality has become really poor in some parts of the USA (Picture: AFP) 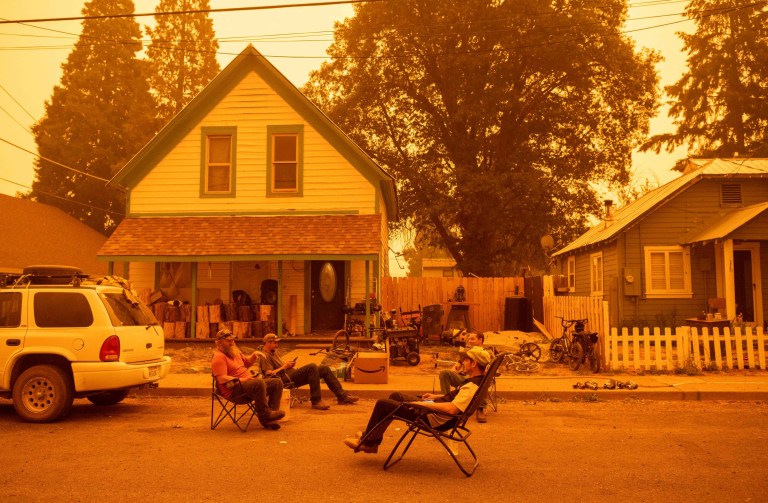 Some residents, including these in Greenville, California, have ignored evacuation orders – instead drinking and listening to country music in the street (Picture: AFP)

The Alder Creek fire in south-west Montana had already charred more than 6,800 acres by Saturday night – when it was 10% contained and threatening nearly 240 homes.

In California, the Tamarack blaze, south of Lake Tahoe, continued to burn devastate woodland and threaten communities on the Nevada border. Air quality there has also deteriorated to very unhealthy levels.

Heavy smoke from that fire and Dixie has reduced visibility and even grounded some aircraft supporting fire crews.

A theme park had to be evacuated in northern Idaho on Friday thanks to a small fire which was half contained by Saturday when the venue reopened.

Looking ahead, forecasters say hot weather and afternoon winds could continue to spread the blazes but there is a chance of scattered thunderstorms in California, Utah, Nevada, Arizona and other states. However, weather experts warned that some could be dry thunderstorms that produce little rain but a lot of lightning, which can spark new blazes.