Spanish village living under huge rock which could collapse any minute

On any given day in the 21st century, in the middle of a pandemic and climate emergency, there are lots of dangerous things to be wary of.

But few of us live under the shadow of a boulder that could crush our home at any moment.

Residents in the Spanish village of Gerb are currently living with such a threat, with a huge 33m high boulder at risk of collapsing and burying half the townlet.

Popularly called Penya de l’Espígol, falling debris from the hill didn’t used to worry the 600 people who live in village, in Lleida, to the north east of Spain.

But that was before a large crack started appearing in the rock and the number of landslides from the crag increased.

The town council decided to find out what was going on and began investigating the rock face’s stability.

Motion sensors were installed to detect any slight movement, and a metal mesh was erected to protect the 10 homes in the village most at threat.

‘If the whole rock were to fall, it would eat up half the village,’ Estefania Rufach, the mayor of Os de Balaguer-Gerb told The Times. 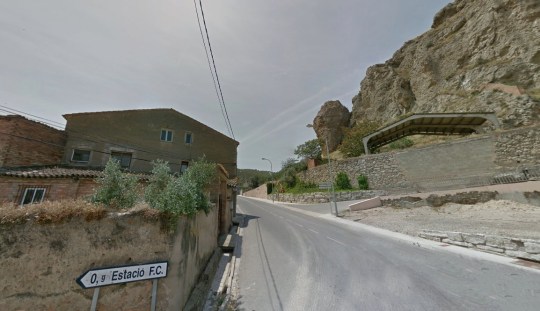 The boulder which looms over Gerb and its residents (Picture: Google Maps)

‘The idea was to carry out a study over the course of a year. But the surprise was that after ten days all the sensors showed movement, indicating that the rock was cracking from top to bottom.

‘This alarmed us because of the possibility that a large mass of rock could break away from the bedrock.

‘What could happem to us is that both the garages and the farms under the rock could be affected by the amount of earth that would fall on them and surely remains of this large mass could reach the road that crosses the middle of the village,’ she added.

Following the worrying discoveries the town installed an alarm system, which sounds a siren everytime a tremor is detected.

Villagers are under strict orders to leave their homes when the alarm goes off. 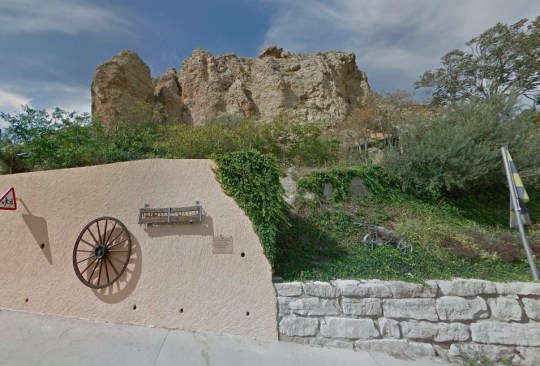 One crack in the boulder which was about 5m long has grown to 20m with a depth of 8m (Picture: Google Maps)

The council has told them: ‘When the alarm goes off, everyone leaves their home to be outside and no one is allowed to walk around underneath the cliff.’

The system has sounded three times since it was installed and went off on New Year’s Eve and January 6, Three Kings Day when Spanish children traditionally recieve presents.

Miquel Boneu, who runs Miq-Mac Art Culinari, a prepared foods company based at the foot of the rock, said at first he treated the situation ‘with a certain degree of humour’.

But after speaking to a geologist, he realised the gravitas of the situation and his concern increased when the expert told him ‘sooner or later this is going to fall, for sure’.

Anotoni Montardit, who lives in Gerb, said: ‘Years ago there ws a landslide, specifically a rock fell on a nieghbour’s house and got into their house.’

But while some villagers are concerned by the increasingly precarious rock, others less so.

One pensioner commented: ‘I’m tranquil. I still take my siesta.’