Students face being barred from campus unless they’re double-jabbed

Boris Johnson is reportedly looking at ways to drive up the number of young people getting vaccines (Picture: Getty/AFP)

Students heading back to campus in September may be denied access to lectures and halls of residence unless they’re double-jabbed.

Boris Johnson is reportedly ‘raging’ at relatively low vaccine uptake among younger people and is increasingly looking to adopt a carrot and stick approach.

Clubbers have already been warned they may need a vaccine passport to get into venues from September and now students could be similarly nudged to get the jab.

The Prime Minister suggested a double-vaccination rule for universities during a video meeting with colleagues last week, according to The Times, with an exemption for those medically unable to receive it.

While the paper reports there are ‘reservations’ about the proposal in the education department, a senior Conservative refused to deny the proposal is under consideration behind the scenes.

Vicky Ford, minister for children, initially denied it is being looked at on Sky News this morning, but her position seemingly softened by the time she appeared on BBC Radio 4’s Today programme.

The Chelmsford MP said: ‘So obviously, I can’t comment on things that haven’t been announced. 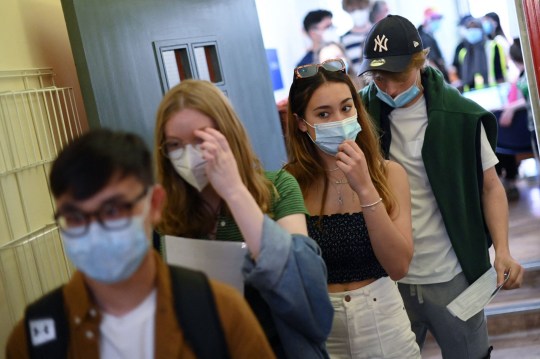 British universities have been operating under tight restrictions since the pandemic began but social-distancing measures have now been lifted (Picture: AFP)

She made similar comments on Times Radio: ‘We don’t want to go back to a situation where large parts of education were closed to many young people and children, and a key part of doing that is having that double-vaccinated population.

‘So I think we need to continue to encourage our young people to step forward, have the vaccination, and that is the way that they can have that freedom and confidence that they’ll be able to have that full university life.’ 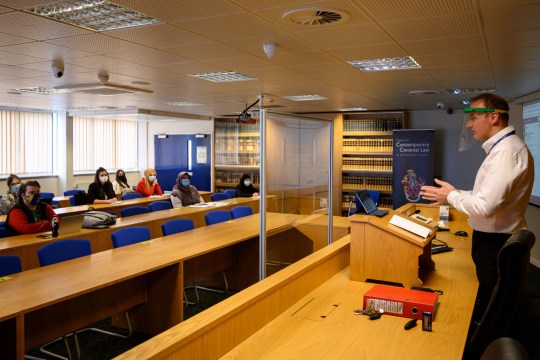 The government is considering vaccine certification as a way of avoiding scenes like this in lecture halls from this autumn (Picture: AFP)

Introducing vaccine passport requirements in the autumn would just about leave enough time for the first dose and the eight-week interval that must pass before the second can be administered.

At the moment, only around 23% of people under 30 would qualify for a vaccine passport.

Plans for vaccine certification at universities would no doubt be met with resistance in Mr Johnson’s own party.

Tory MP and chair of the education select committee Robert Halfon told The Times he thinks the idea is ‘wrong-headed’.

He compared the move to Aldous Huxley’s dystopian novel Brave New World, and said: ‘Where does this stop?

‘Do we fire apprentices who have not had the vaccine? Do we remove older students from FE (further education) colleges?

‘Do we close down adult education courses where adults have not had the vaccine? I hope not.’