Holidaymakers dash out from gates on the left (main image) as they lay claim to sun loungers around the pool in Tenerife (Picture: Joanne Marie Parry)

Holidaymakers in Tenerife appear to be straight out of a Benny Hill sketch as they engage in a bout of towel-slinging at the sunbeds.

Fleet-footed guests of all ages were filmed bursting onto the poolside in the morning scramble for prime reclining space around the water.

A man in an orange T-shirt breaks into a near-sprint before frantically throwing towels down on four loungers to claim his territory.

But even with his neat manoeuvring between sunbeds on his way to the desired row, he was beaten to the coveted spots by a girl in full stride.

Joanne Marie Parry shot the video on Saturday at the Paradise Park Fun Lifestyle Hotel after hearing about the early morning dashes before she arrived at the four-star resort in Los Cristianos.

She told Metro.co.uk: ‘They queue up from 7.30am on four sides of the pool.

‘I’d seen it before we arrived but I didn’t believe it. It just tickles me, especially the guy in the orange T-shirt.’

The sunbed scramble sparked bemused and appalled comments after the tourist shared the clip in a Facebook group.

One person wrote: ‘How degrading – throwing towels onto sunbeds as you get near them so no one else can. It has given me a laugh though – some could get medals for the 100m sprint.’

Another said: ‘I just heard the Benny Hill theme in my head watching this.’

Mobile phone clips showing a variety of tactics being used in order to bag a lounger for the day have gone viral on social media this summer.

At another resort in nearby Playa de las Americas guests were also filmed descending on sunbeds as the pool area was unlocked.

Chloe Turner, who recorded the race, claimed people began queueing from 6.30am – 90 minutes before the gates were opened. 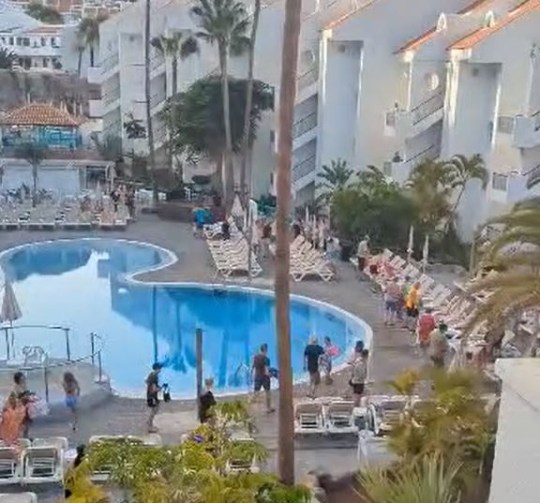 Guests descend on the sunbeds with one man throwing down several towels on the prime spaces (Picture: Joanne Marie Parry)

In Majorca, holidaymakers were filmed having spread towels out on the ground in order to lay claim to the best spots before sunbed stacks were unlocked at 9am. A guest said it was ‘like the rush for boats on the Titanic’.

British tourists coveting prime spaces at resorts has traditionally been a setting for battles with German holidaymakers and a thorn in the side of staff at busy resorts in the Canaries and mainland Spain.

Workers at the Gran Costa Adeje Hotel in Tenerife provided a moment of revenge when they were spotted removing towels used to reserve places. 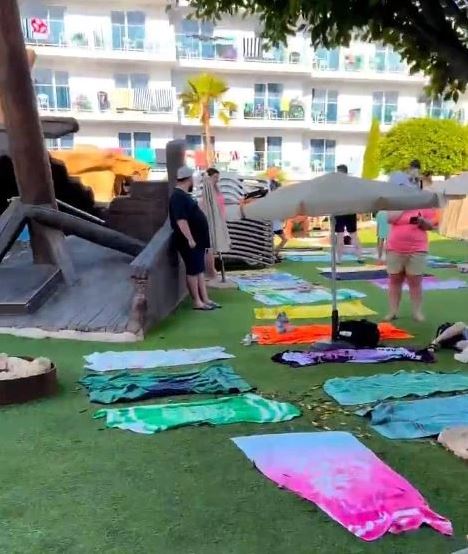 The tactics used to ensure a spot by the pool have been taken to task in an Instagram video (Picture: Rebekah/Instagram/@being_that_mum)

A video taken by Amanda Proctor showed one member of staff flinging more than 10 placeholders over his shoulder at one point.

Most people viewing the clip sided with the hotel staff and urged more resorts to adopt a similar policy.