Officers are looking for a man pictured committing a shocking act of violence towards a police horse (Picture:AFP/EPA/Getty)

Police are searching for an anti-lockdown protester who punched a horse after a Sydney demonstration turned ugly.

Protests took place in several Australian cities on Saturday after officials imposed restrictions to combat a surge of Covid-19 infections.

Unmasked protestors clashed with police after they broke through barriers and pelted officers with bottles and plants.

Several arrests were made as the demonstrators made their way towards the city’s town hall.

New South Wales Police has called for witnesses to identify the man but confirmed the horse – Tobruk – was uninjured.

A statement from the force said the animal is ‘recovering back at the stables after a hard day’s work’ and said a task force of ‘at least 22 detectives has been established to identify and prosecute all those who broke the law today’.

The protest took place the same day as case numbers in the state reached another record, with 163 new infections recorded in a 24 hour period. 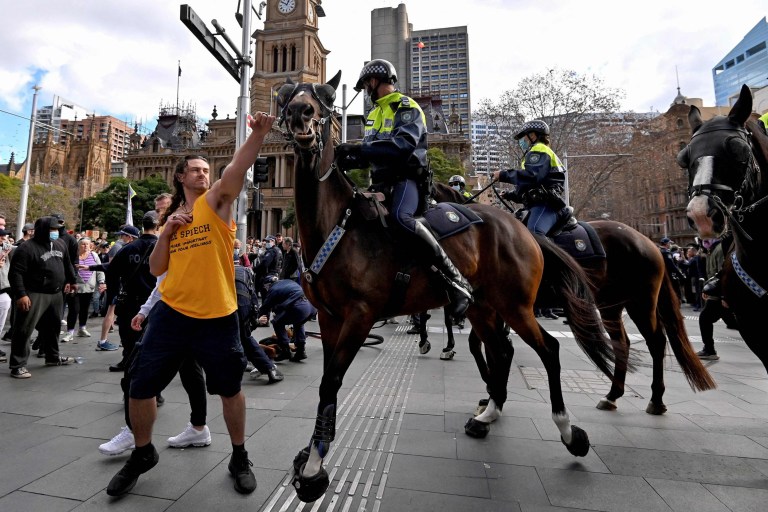 The man was seen throwing a punch at the horse as protestors clashed with police in Sydney (Picture: AFP) 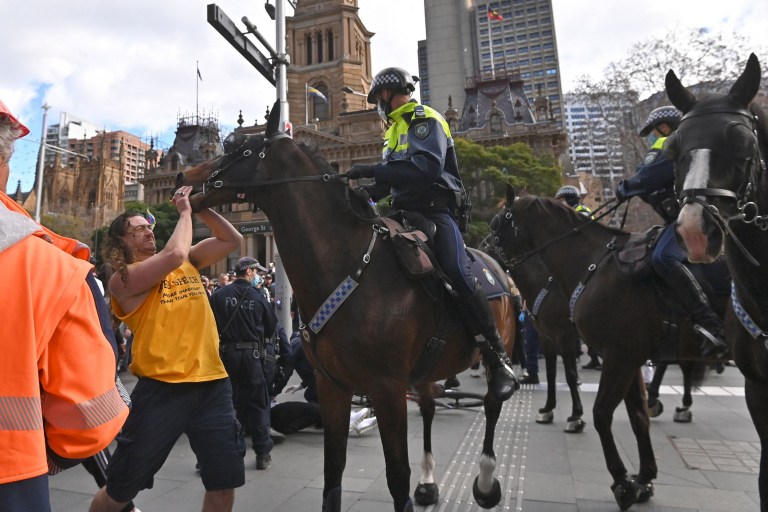 In a separate image, he could be seen appearing to grab the horse by the mouth (Picture: AFP) 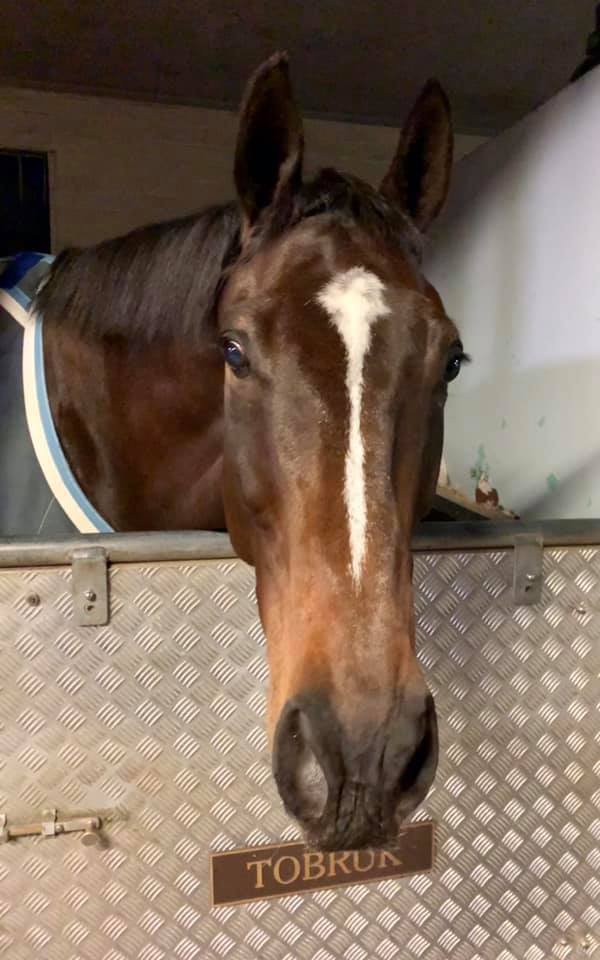 The force has confirmed the animal was uninjured and is resting up back at the stables (Picture: Facebook/NSW Police Force)

Australia’s policy of border restrictions, local lockdowns and quarantine for contacts has successfully kept cases relatively low throughout most of the pandemic.

But the arrival of the Delta variant has changed the picture and now 13 million people – half of the country’s population – are back in some form of lockdown.

Australia’s vaccine rollout is lagging behind other developed nations, with less than 13% fully protected so far. 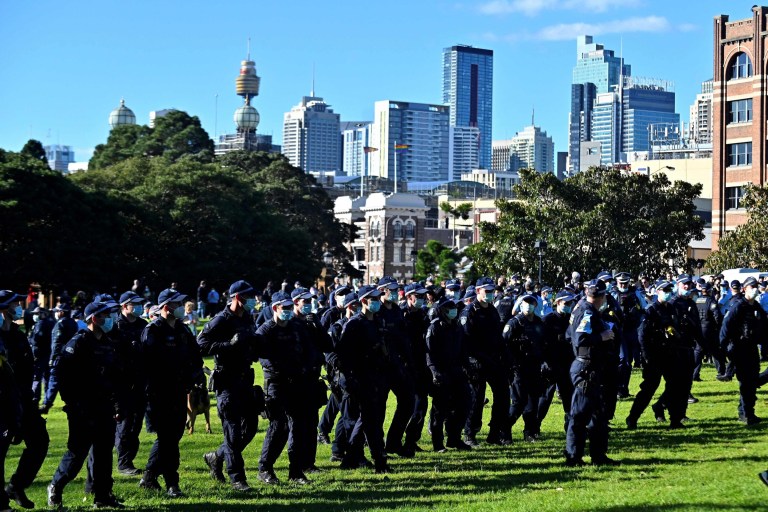 Hundreds of police officers were drafted in but the demonstration descended into disorder (Picture: AFP) 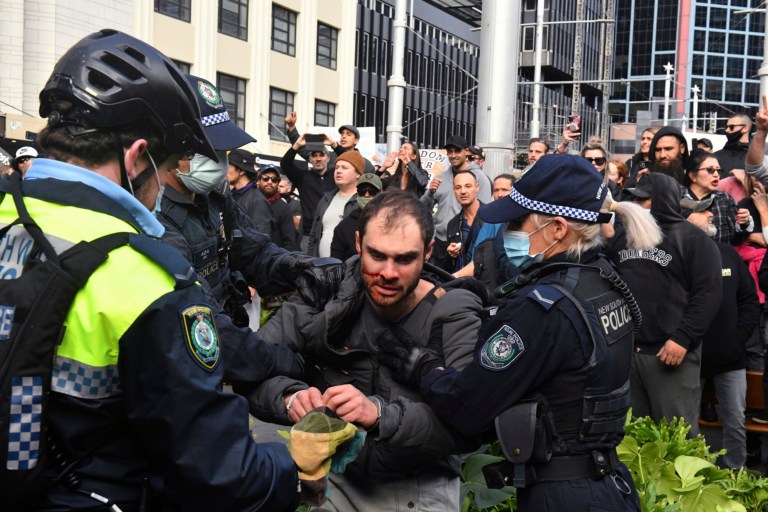 Bloodied protesters were seen being detained and objects were thrown at officers (Pictures: AP) 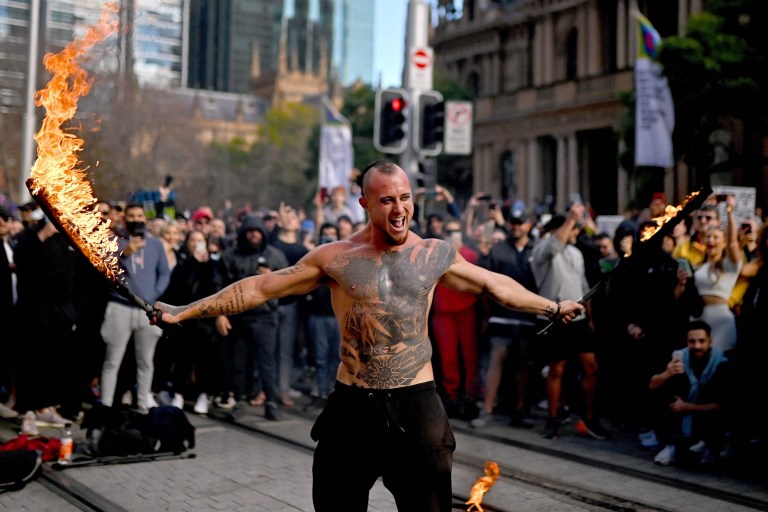 The city has been placed back into lockdown after a new surge of infections fuelled by the Delta variant hit the city (Picture: AFP) 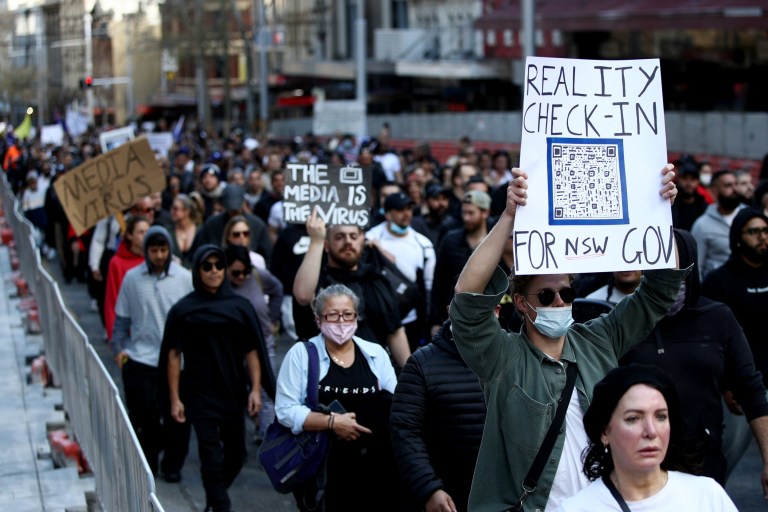 Australia has managed to avoid strict measures for most of the pandemic but now half the country’s population is back in some form of lockdown (Picture: Getty)

Greater Sydney has been locked down for the past four weeks, with residents only able to leave home with a reasonable excuse.

The state’s health minister Brad Hazzard said: ‘We live in a democracy and normally I am certainly one who supports people’s rights to protest … but at the present time we’ve got cases going through the roof and we have people thinking that’s OK to get out there and possibly be close to each other at a demonstration.’

In Melbourne, thousands of protesters gathered outside Victoria state’s Parliament House and lit flares, while a ‘car protest rally’ is planned in Adelaide.