There are calls for an inquiry into the pandemic earlier than spring (Picture: Reuters/Getty)

Brits will be paying back hundreds of billions of pounds to cover the cost of Covid for decades to come, key MPs have warned.

Two new reports are also suggesting that an inquiry into the pandemic will not come quickly enough to learn the necessary lessons.

It also warned that the estimated cost of Government measures has also topped £372 billion – and climbing – adding that taxpayers will be exposed to ‘significant financial risks for decades to come’.

But the committee also ‘remains concerned that despite spending over £10 billion on supplies, the PPE stockpile is not fit for purpose’.

It comes after Metro.co.uk revealed that more than two million pieces of PPE worth nearly £100 million but deemed unsuitable for the NHS are now being flogged to Nato countries by Britain.

The MPs’ research suggests that as of May 2021, out of 32 billion items of PPE ordered by the Department of Health, some 11 billion had been distributed, while 12.6 billion are stored in the UK as stock and some 8.4 billion have still not arrived in the UK. 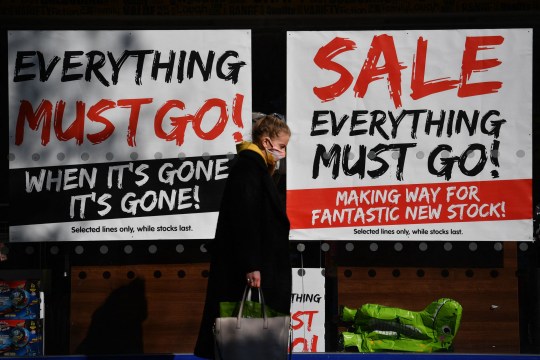 Brits are likely to face the economic consequences of Covid for decades to come (Picture: AFP)

The PAC raised fears that the stockpile was costing around £6.7 million a week to store, and branded potential waste levels ‘unacceptably high’.

They added that 2.1 billion items of PPE had already been found unsuitable for use in medical settings – more than five times the estimate given to MPs by the Department of Health six months ago.

PAC Chair Dame Meg Hillier said: ‘With eye-watering sums of money spent on Covid measures so far, the Government needs to be clear, now, how this will be managed going forward, and over what period of time.

‘The ongoing risk to the taxpayer will run for 20 years on things like arts and culture recovery loans, let alone the other new risks that departments across Government must quickly learn to manage.’

Meanwhile, the report placed further pressure on the Government to bring forward a promised public inquiry into the pandemic, which is not expected to start until spring next year – and will likely last for years.


The PAC report said it was ‘clear that Government cannot wait for the review before learning important lessons’ and called for a Covid recovery plan in the autumn.

Dame Meg said: ‘If coronavirus is with us for a long time, the financial hangover could leave future generations with a big headache.’

Labour deputy leader Angela Rayner claimed the cross-party report was more evidence of the Tories’ failures during the pandemic that she says ‘resulted in tens of thousands of avoidable deaths and saw eye-watering sums of taxpayers’ money wasted on unsafe PPE and contracts handed out to their mates’.

‘We cannot wait until next year for the public inquiry to start and ministers cannot kick it into the long grass and cover up their failures by refusing to hand over information hidden in personal email accounts,’ she added.

Ms Rayner called for the public inquiry to start ‘immediately’.

A Department of Health spokesperson told Metro.co.uk: ‘There are robust processes in place to ensure that government spending always provides value for money for the taxpayer.

‘We have worked tirelessly to source life-saving PPE to protect health and care staff, and we have delivered over 12.7 billion items to the frontline at record speed. As the National Audit Office has recognised, all NHS providers they spoke to were able to get the equipment they needed in time.’

There were shortages of PPE during the earlier stages of the pandemic in the UK.

The spokesperson added: ‘We have established and maintained safety stocks of all COVID-19 PPE, to ensure an uninterrupted supply to the frontline.

‘To date 2.5 billion items of PPE have been delivered from UK manufacturers, with contracts signed for 3.9 billion items with over 30 companies.’