Northumbria Police has referred itself to the police watchdog over the fatal incident (Picture: NCJ Media)

Two suspected joyriders have died in a crash after a police chase, leaving an innocent woman with serious injuries.

Officers pursued a Volkswagen Golf, which was believed to be stolen, down a dual carriageway in Newcastle this morning.

Its driver ‘failed to stop when instructed to by police and made off’, hitting another car minutes later.

Two men inside the Golf died at the scene and a third was taken to hospital with ‘serious injuries’.

A woman who was in the Honda which was struck by the Golf was also taken to hospital.

Specially trained officers have informed the families of the deceased.

The incident happened shortly before 9pm on Barrack Road, a busy route north of the city centre.

Northumbria Police has referred itself to the watchdog and is now under investigation. 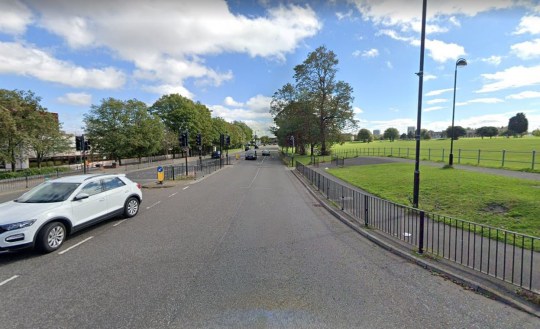 The collision occurred on Barrack Road, a busy route into the city centre (Picture: Google)

The road was closed well into the afternoon to allow debris to be removed and evidence to be collected.

A spokesperson for the Independent Office for Police Conduct confirmed the probe.

They said: ‘We were notified by Northumbria Police that at around 8.55am on Sunday 25 July in Barrack Road a VW Golf car – believed to have been stolen – had been pursued by police.

‘Our investigators are attending the scene of the collision and the post-incident procedures where the officers involved will provide their initial accounts.

‘Our thoughts are with the families of all those affected by this incident.’