UK Covid cases fall for fifth day in a row

The number of daily Covid infections has continued to fall, with 29,173 new cases recorded across the UK in the last 24 hours.

It is the fifth consecutive day they have dropped, but experts have urged caution before more data becomes available on how ‘freedom day’ has affected cases.

A total of 28 people have died in the past 24 hours after testing positive for coronavirus.

Professor Adam Kucharski yesterday said that while ‘early signs’ suggest transmission rates appear to be falling, we have yet to see the impact of last Monday’s ‘big reopening’, adding: ‘We’ve seen false peaks before.’

The epidemiologist from the London School of Hygiene and Tropical Medicine told the BBC: ‘Of course that change on Monday, that big reopening, has not yet shown up in the data.

‘So I think the next week or two is going to be crucial to know if this is genuinely a slowdown of a potential peak, or if we’ve got more transmission to come.’

It comes as ministers attempt to tackle the ‘pingdemic’ crisis causing staff shortages across the UK.

To facilitate the new self-isolation rules for some critical workers, the Government said daily testing for workplaces in the food supply chain was being extended to frontline emergency services and some transport workers. 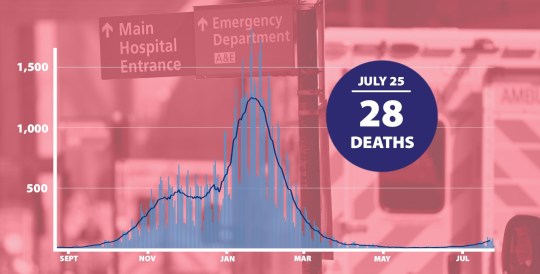 A further 28 people died after testing positive for coronavirus 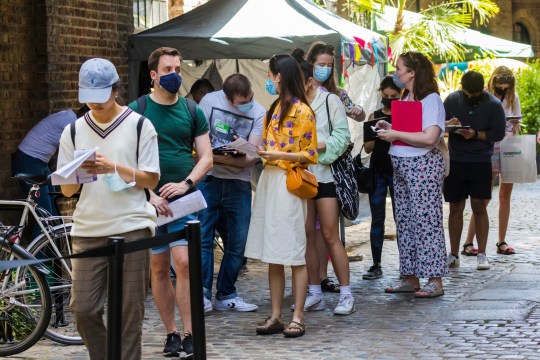 An extra 200 testing sites are expected to open, but not until Monday at the earliest.

Refuse collectors are expected to receive assistance, but the hospitality industry will not.

He also acknowledged the ‘challenge’ across policing as Metropolitan Police Federation Ken Marsh said 17% of officers in the capital were off last week, causing a ‘huge strain’ on colleagues.

Reduced timetables were being introduced on railways across England after a spate of last-minute cancellations due to staff self-isolating.

The scale of the issue was shown by figures stating more than 600,000 people in England and Wales were told to quarantine by the NHS Covid-19 app in the week to July 14.

In the emergency measures, around 10,000 fully vaccinated workers in the food sector will be exempt from isolation if they test negative.

But figures in the food industry warned shortages on shelves could continue with more exemptions in the supply chain needed, such as in supermarkets.