FLASH floods are wrecking homes and causing motorway chaos as thunderstorms batter London and the South.

A number of “families with children” are said to reported to have been trapped in their cars in four feet of water in the M11 in London. 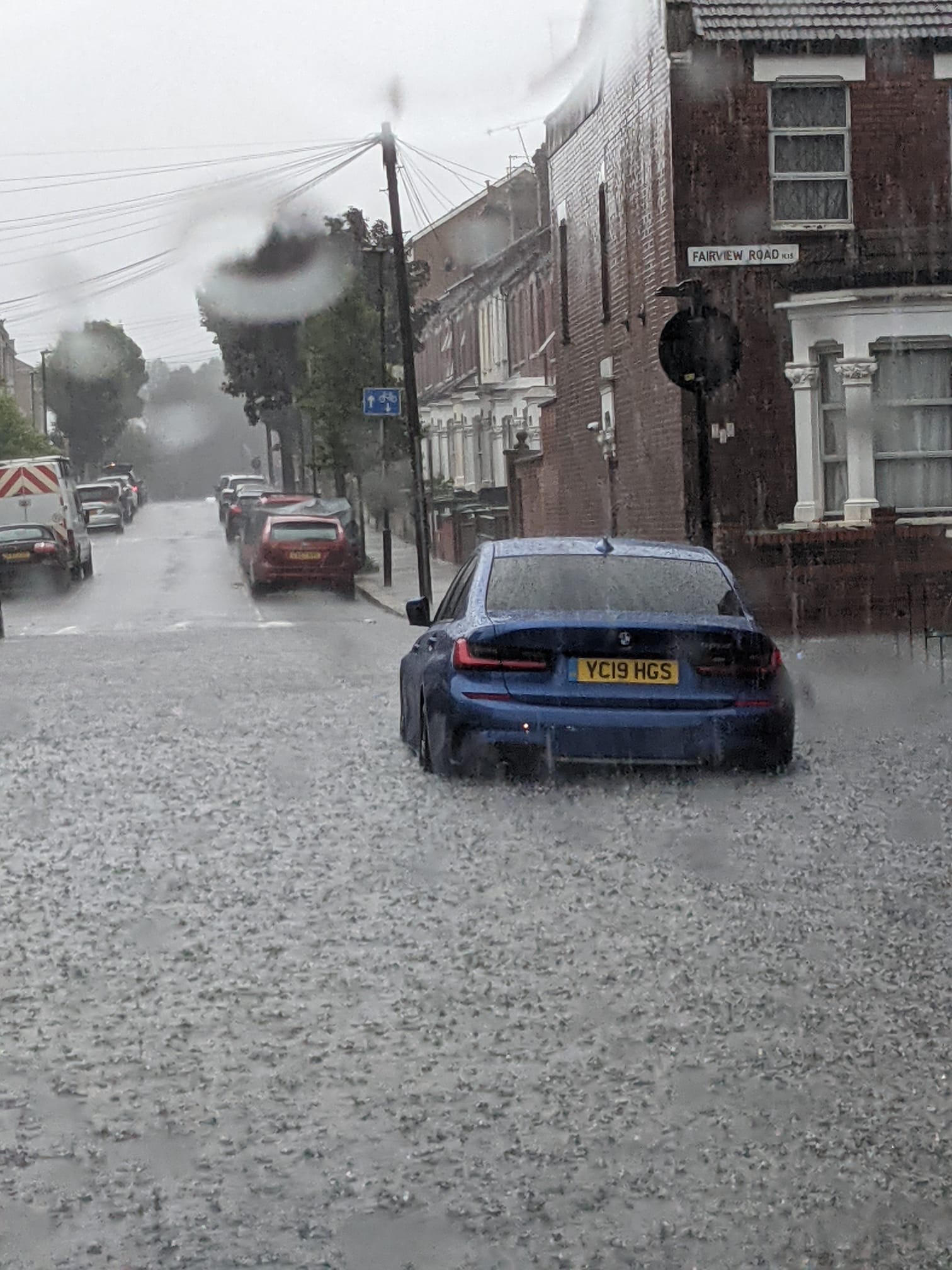 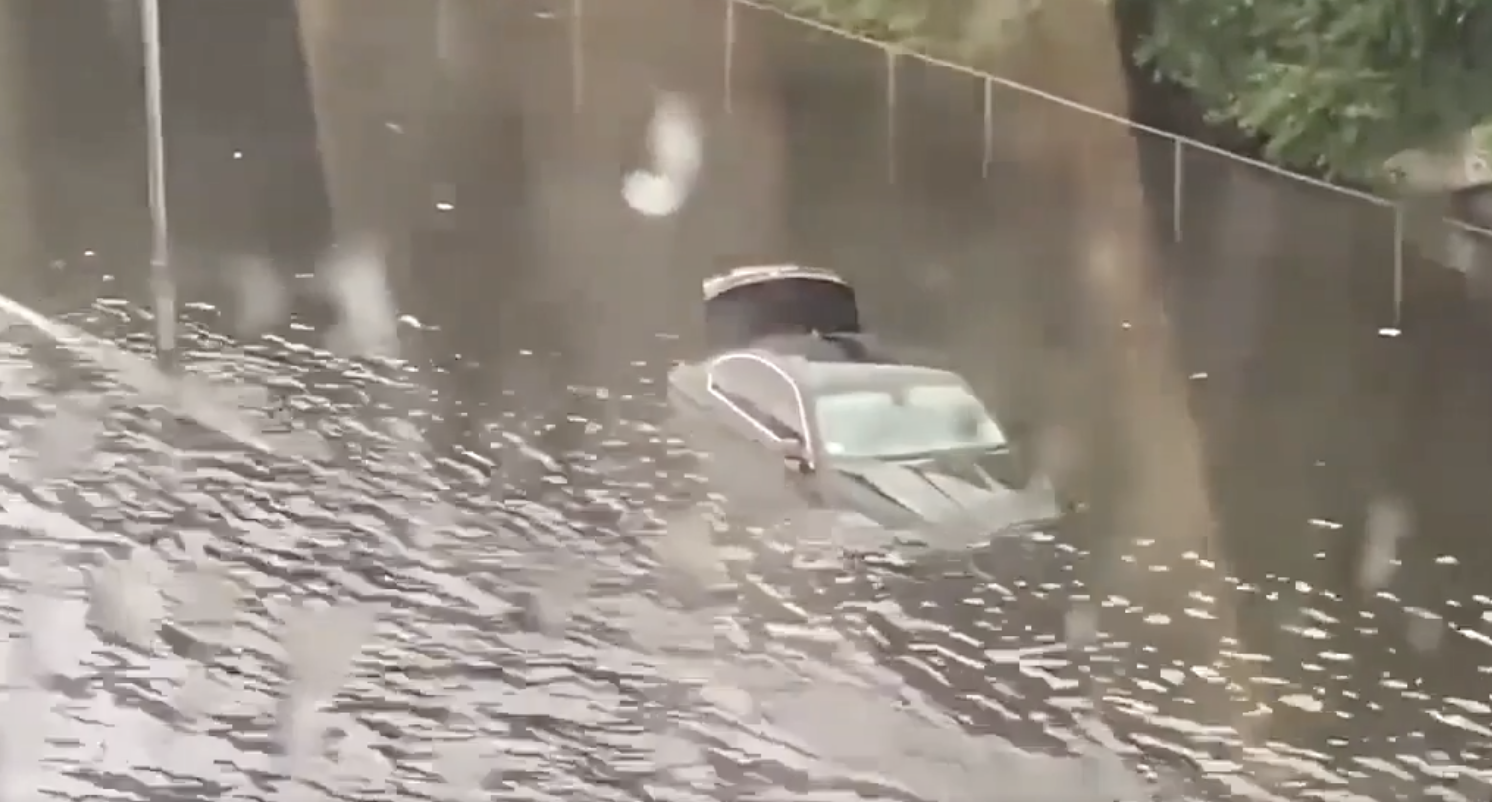 Metropolitan Police declared a “major incident” as Covid-19 testing centres in Waltham Forest have been closed due to floods, and as a sinkhole appears on the M11 in Redbridge causing families stranded and a “risk to life”, Met Police say.

Footage shows emergency services wading through to rescue them as the A406 slip road is closed.

Numerous “families with children” are reportedly among those stranded on the motorway while emergency services reach them in dinghies.

Also in Waltham Forest, Whipps Cross Hospital has been flooded and lost power, with emergencies told to divert to other hospitals.

The Met Office has issued an amber warning for storms covering London and some of the Home Counties where houses and businesses are at risk of flooding, lasting until 7pm.

A yellow warning for storms that could cause travel and power disruption also covers a wider area of the south from Norwich to Plymouth, and lasts until midnight.

Meanwhile, parts of northern England, Wales, Scotland and Northern Ireland have been bathed in sunshine.

Met Office meteorologist Steven Keates said parts of the south between south Suffolk and the Isle of Wight could be deluged by 100mm of rain in just a few hours on Sunday evening.

He said: “There are torrential thunderstorms around yet again.

“Into the evening, from Norfolk to Bournemouth we are going to see some pretty lively showers.

“Torrential downpours, thunder and lightning and potentially some hailstones are settling in the south.”

Mr Keates said the storms are being caused by a “convergence” of air currents, because of warmth in the earth’s surface from the recent heatwave rising into cooler air in the atmosphere.

Neighbours heard an “enormous bang” as the strike set two homes ablaze on Mercia Avenue, and a 70-year-old woman was assessed by paramedics.

Kingston Police, who oversee a borough in the amber zone for storms, warned motorists to “drive carefully” and remember they are “not driving a submarine”.

The force said in a tweet: “Please remember to drive carefully.

“Also remember that you’re not driving a submarine.

“Do not enter what could possibly be deep water.

“Watch your speed and distance as stopping distances will be greater.”

The rain brought an end to the heatwave earlier this week, potentially disappointing anyone who hoped for a dry, sunny trip to the coast. 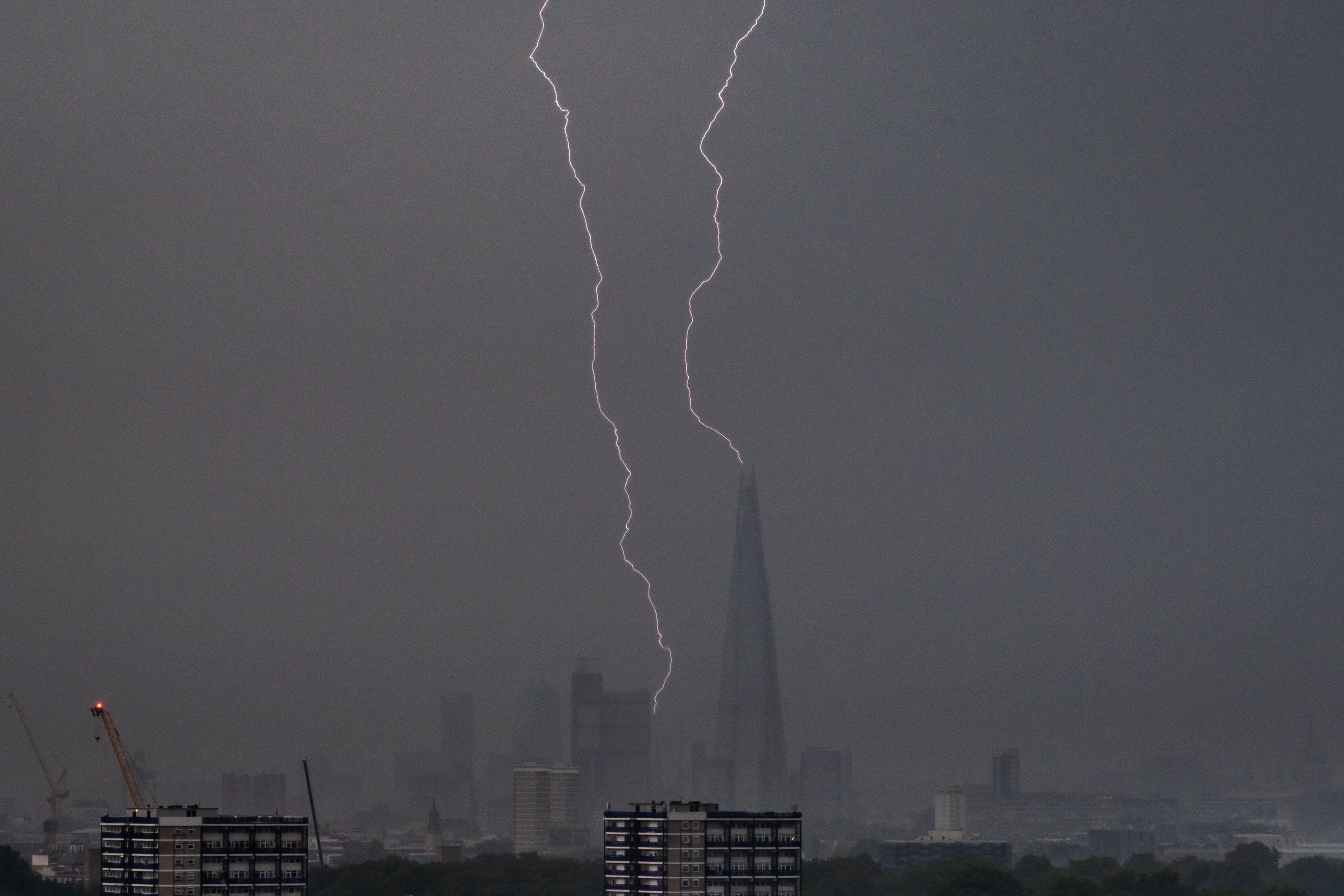 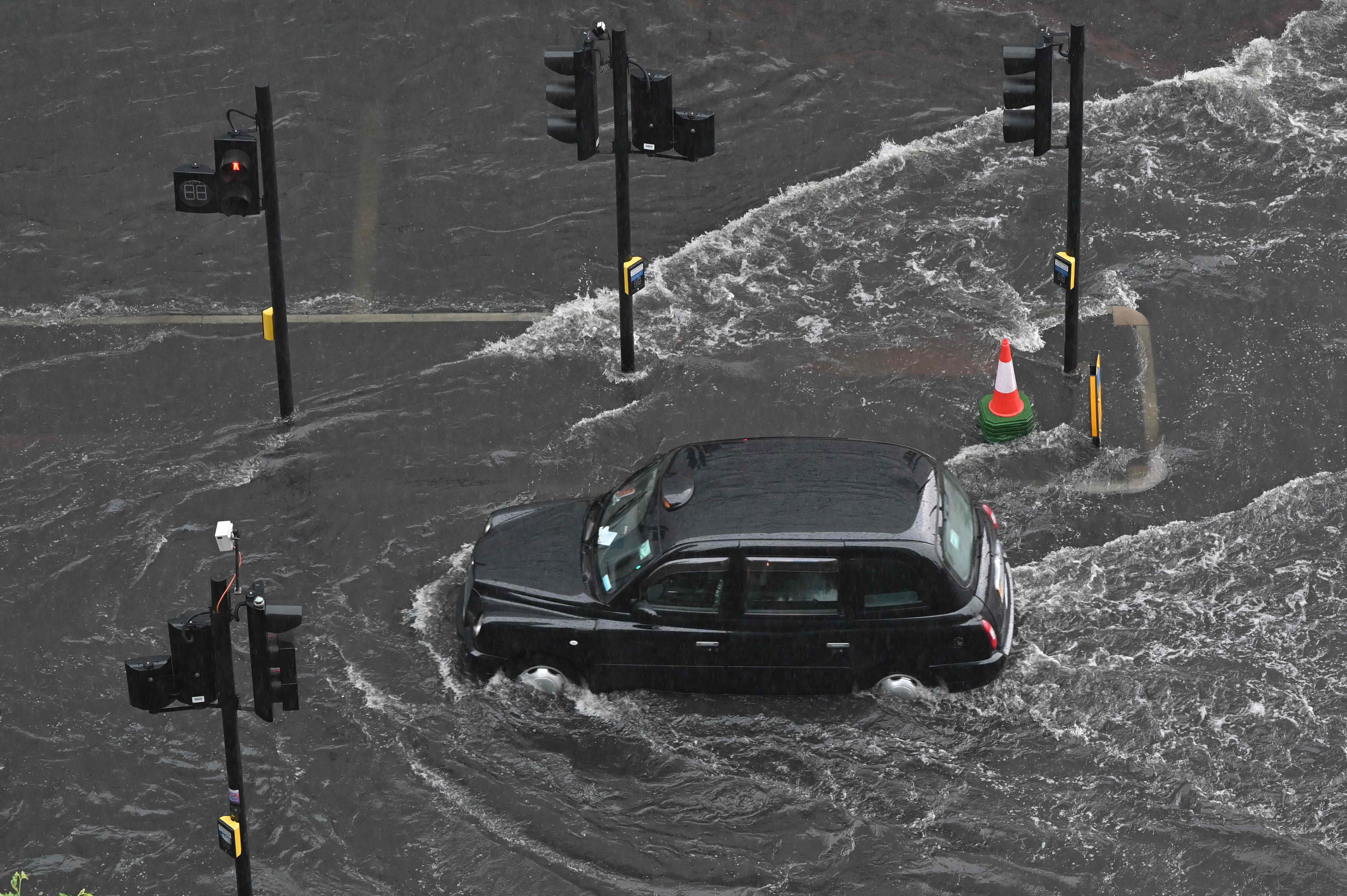 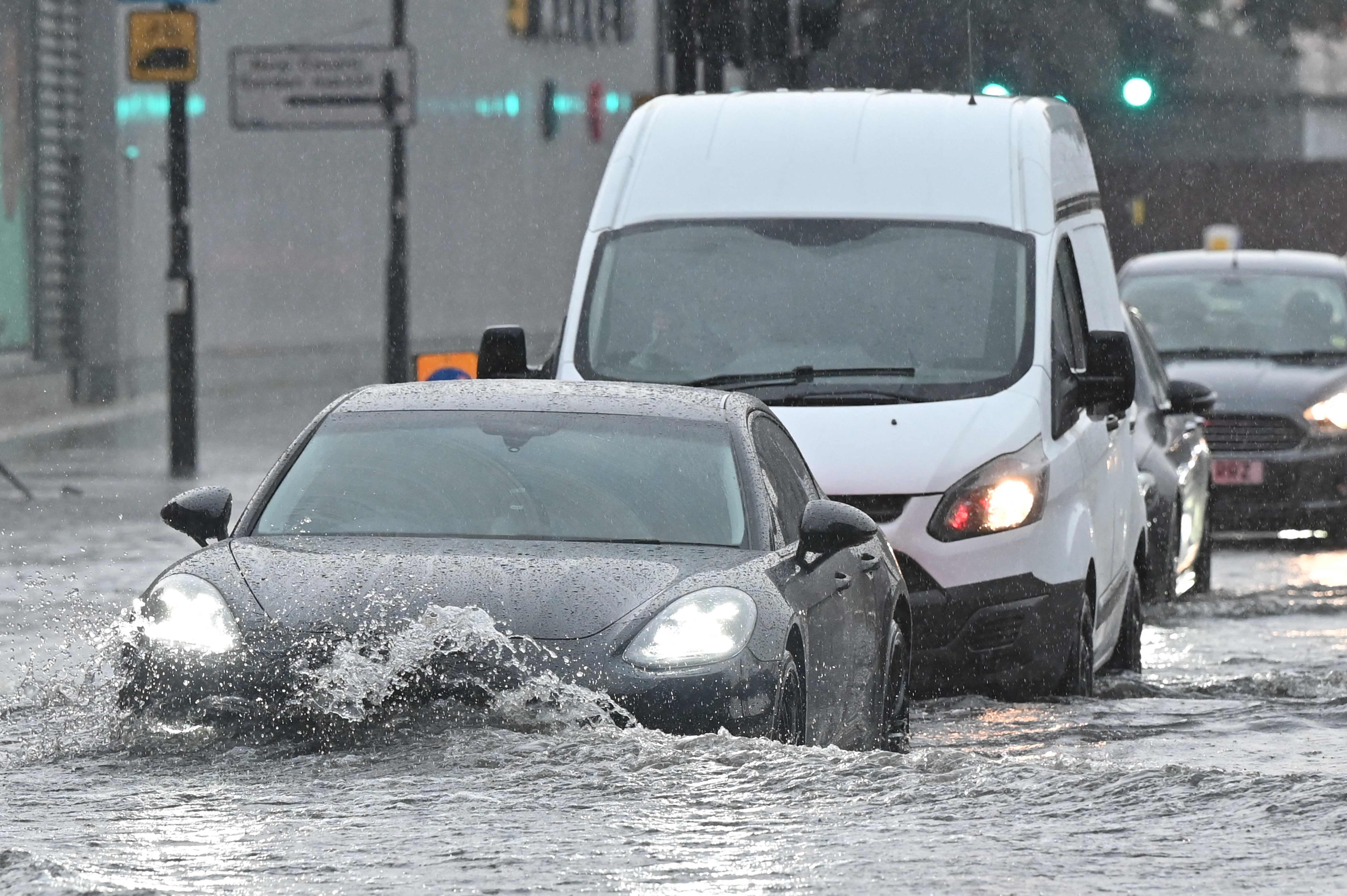 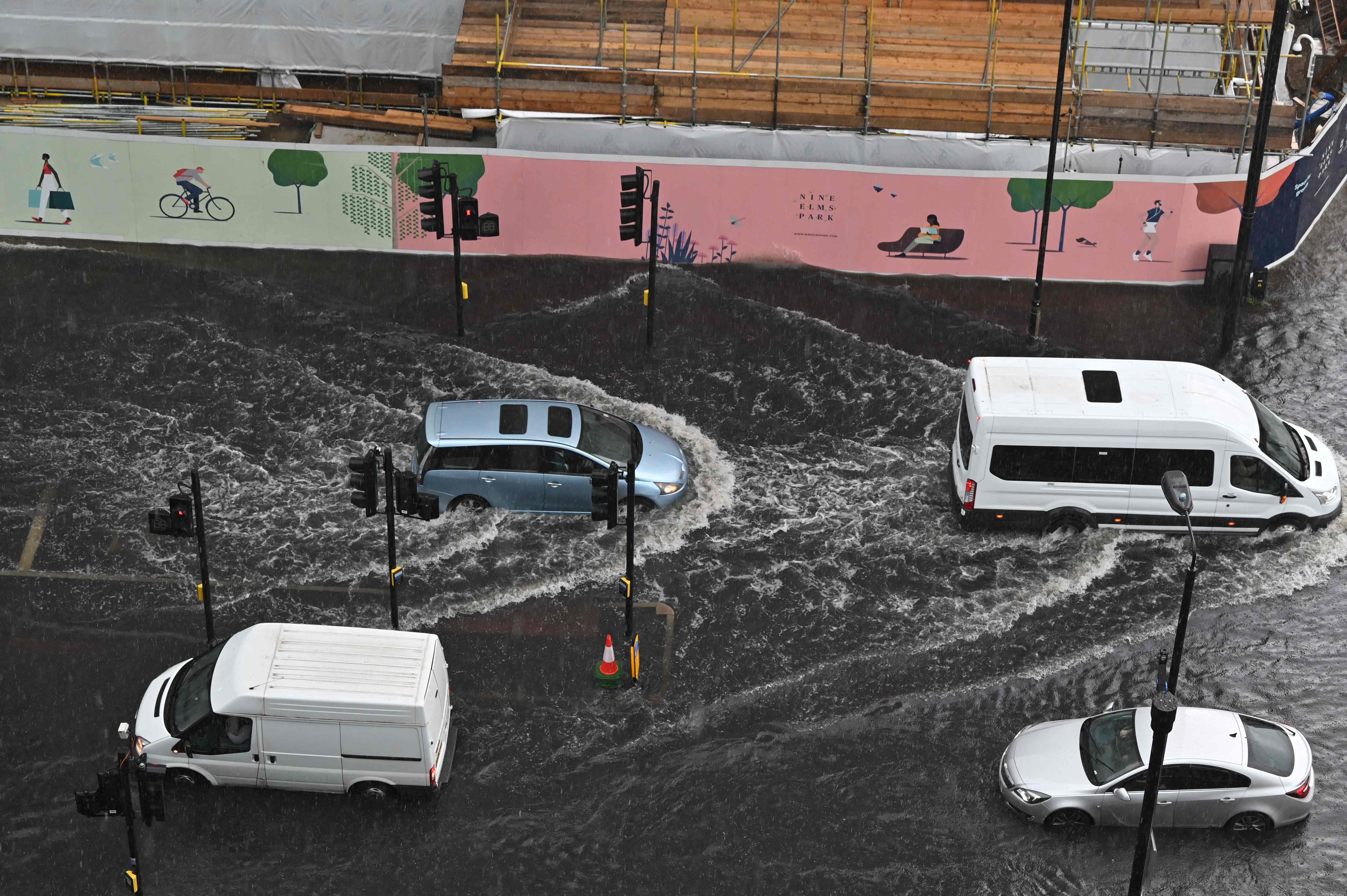 Traffic driving through water on a flooded road in The Nine Elms district of LondonCredit: AFP

The rest of the country was forecast to experience a cloudy, more settled end to the week while sunshine is expected in Scotland.

Temperatures are set to rise in most places again on Monday as the storms clear, with the mercury predicted to reach 26C in London, 25C in Edinburgh, 24C in Cardiff, and 22C in Belfast.

The Met Office has predicted early cloud in some northern and eastern parts which will move up to Scotland, and sunny spells and scattered showers in most places throughout the day. 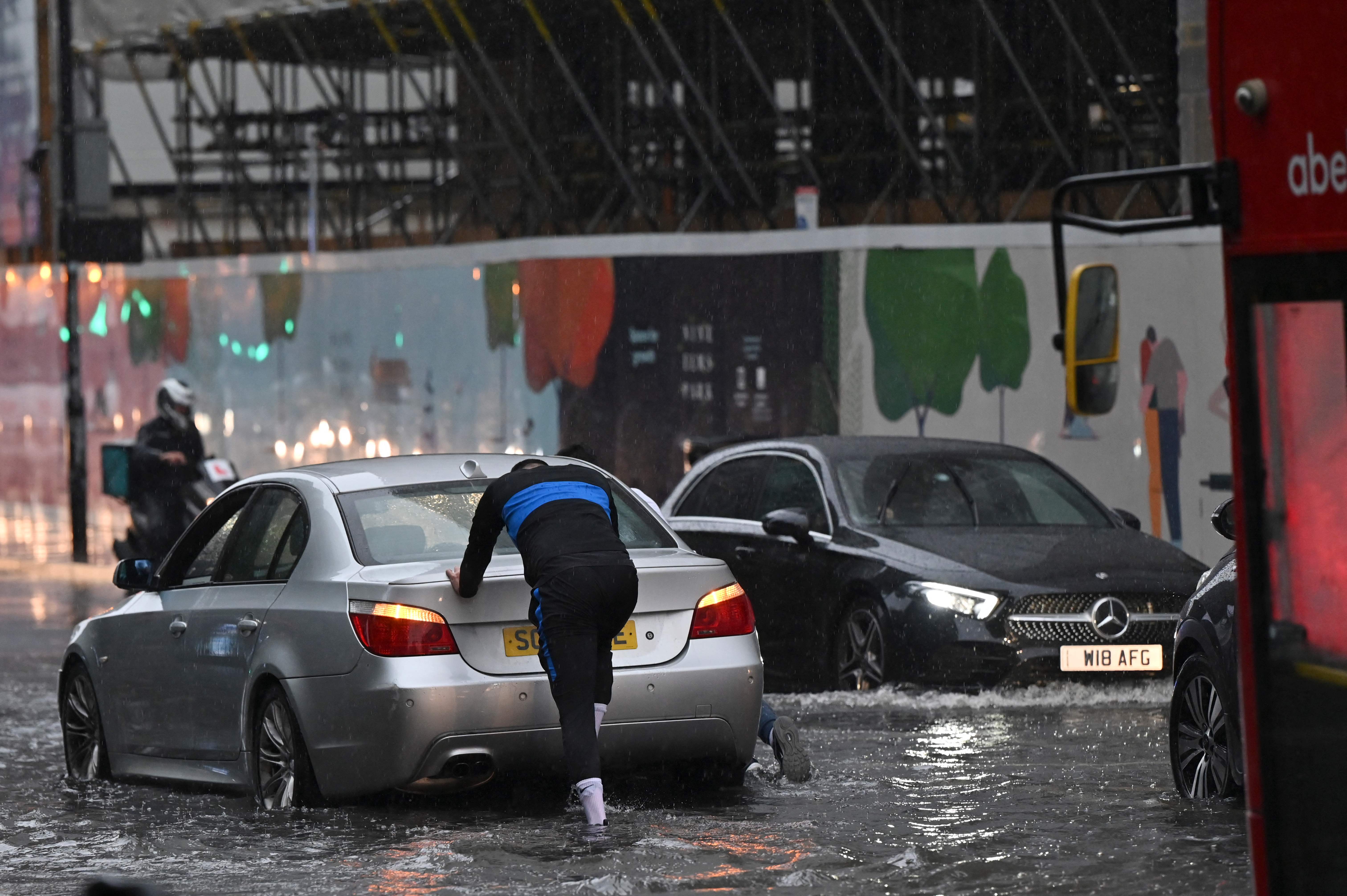 Cars in London breakdown trying to get through waterlogged streetsCredit: AFP 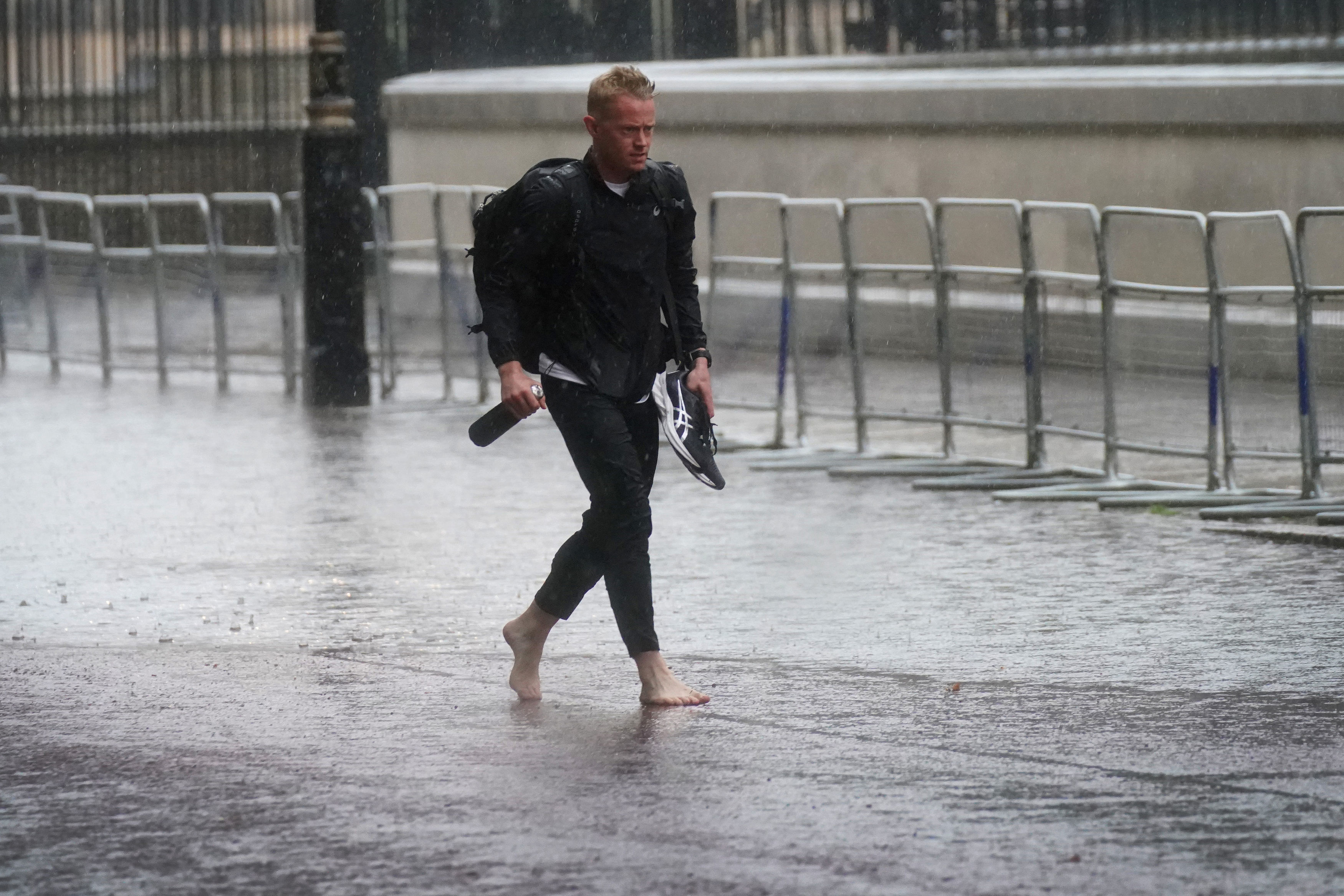 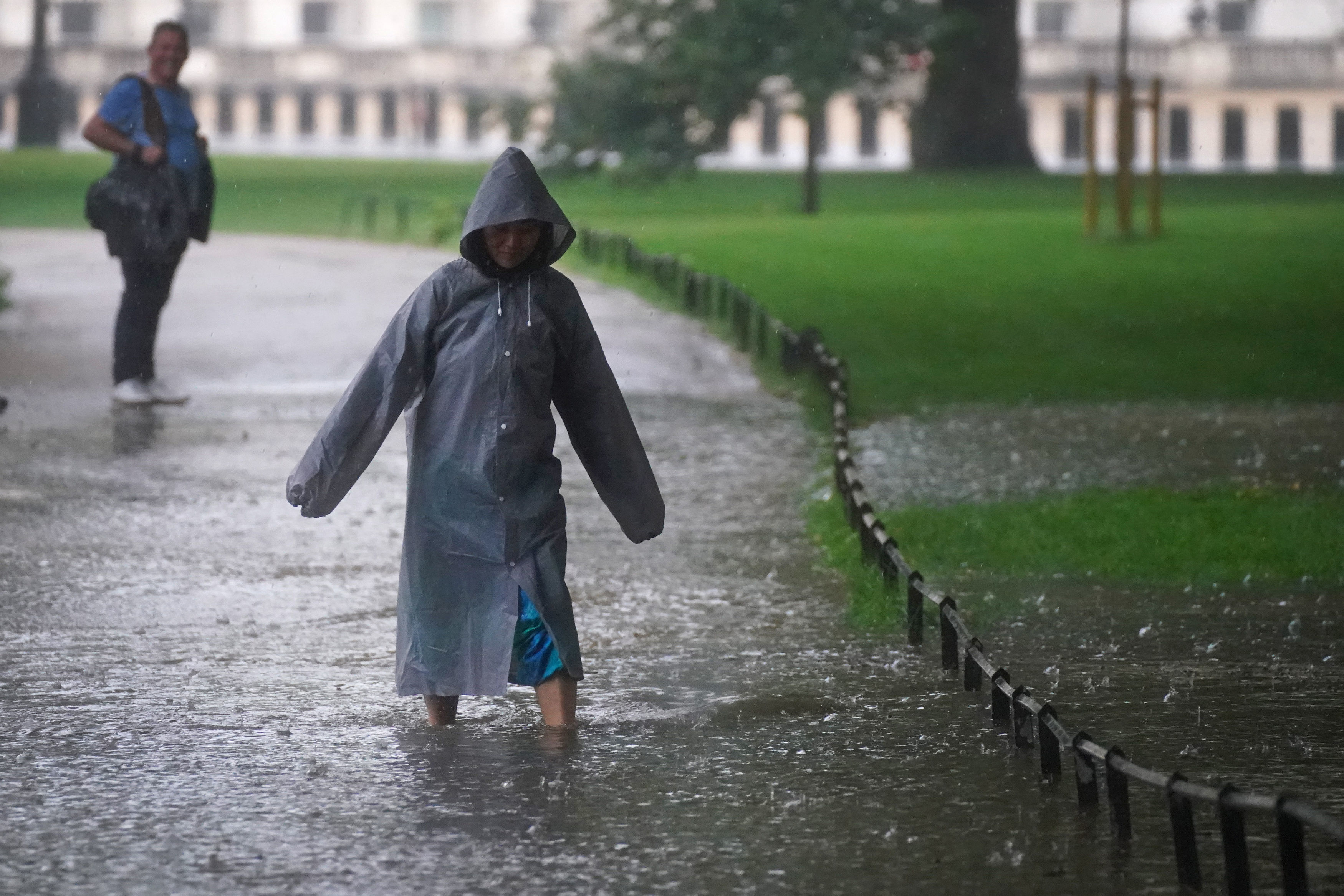 A woman walks through a flooded path in St James’s Park in central LondonCredit: PA 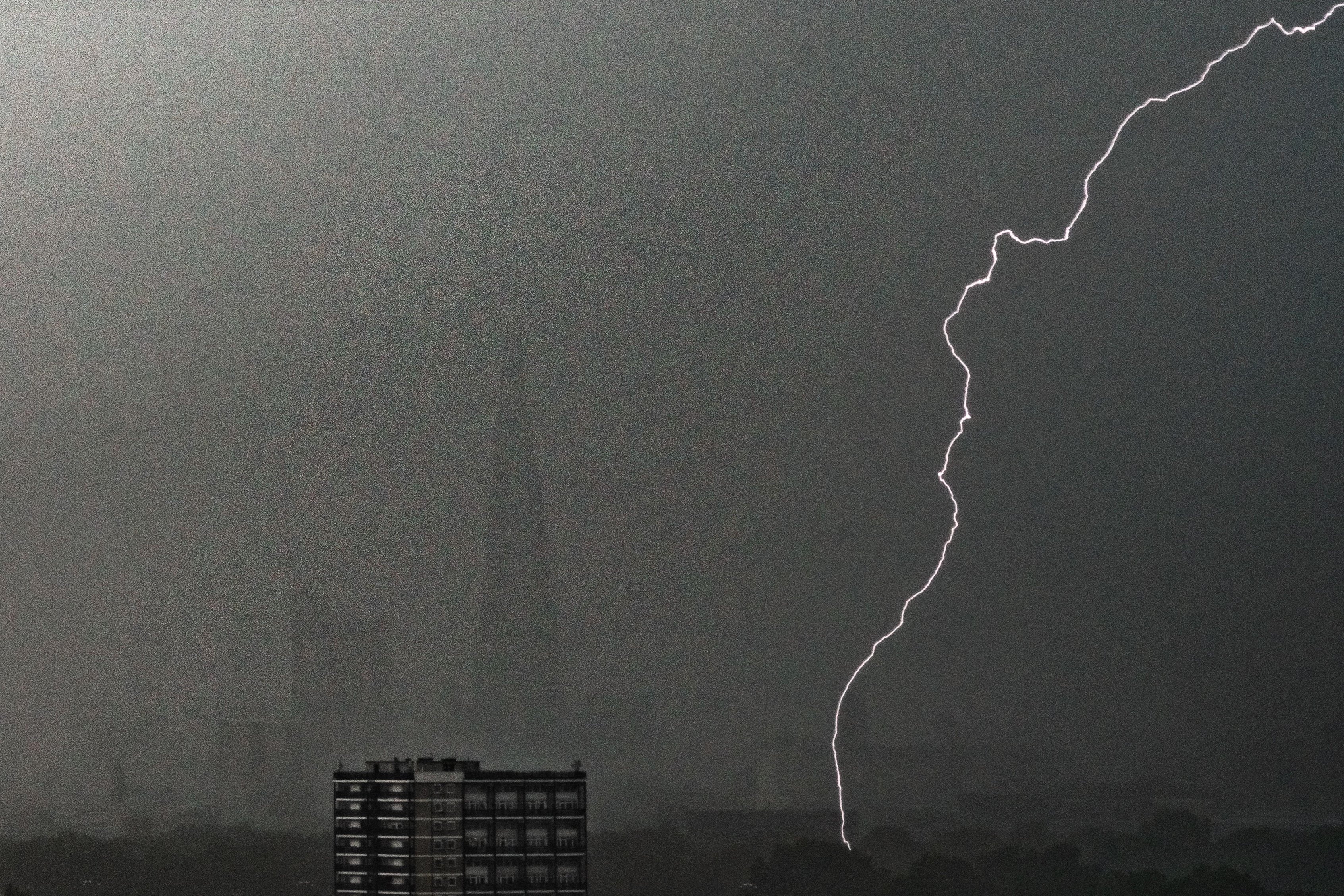 Lightning strikes near The Shard skyscraper building seen through heavy rainfall during a mass storm over the cityCredit: Alamy