SNOW is set to hit London and most of England tomorrow as an icy blast continues to grip Britain.

The Met Office has issued yellow weather warnings for snow and ice across the UK, with up to 10cm expected in East Anglia, Kent and Sussex. 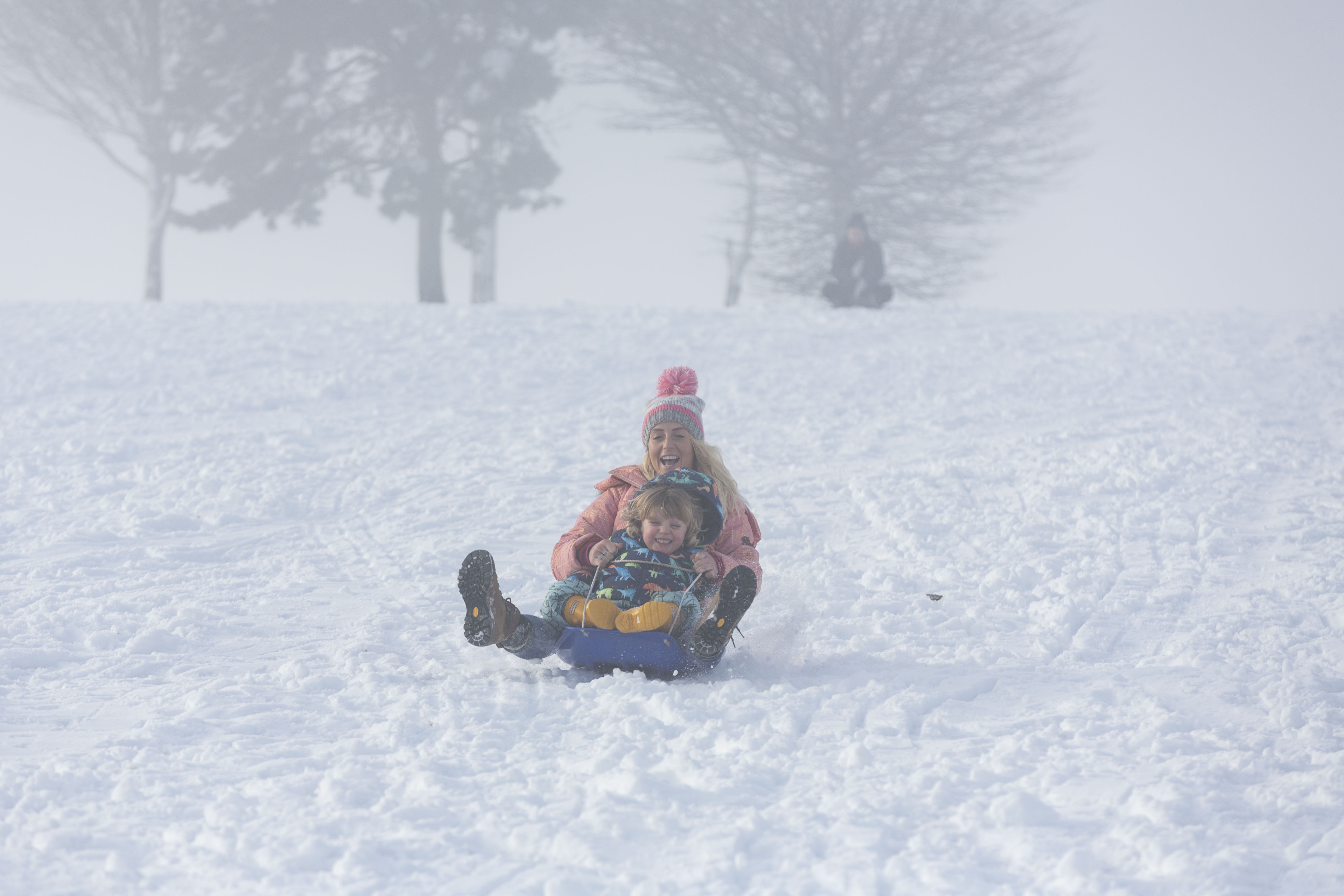 These two took to the slopes to enjoy the snow in Roundhay Park, Leeds, todayCredit: SWNS:South West News Service 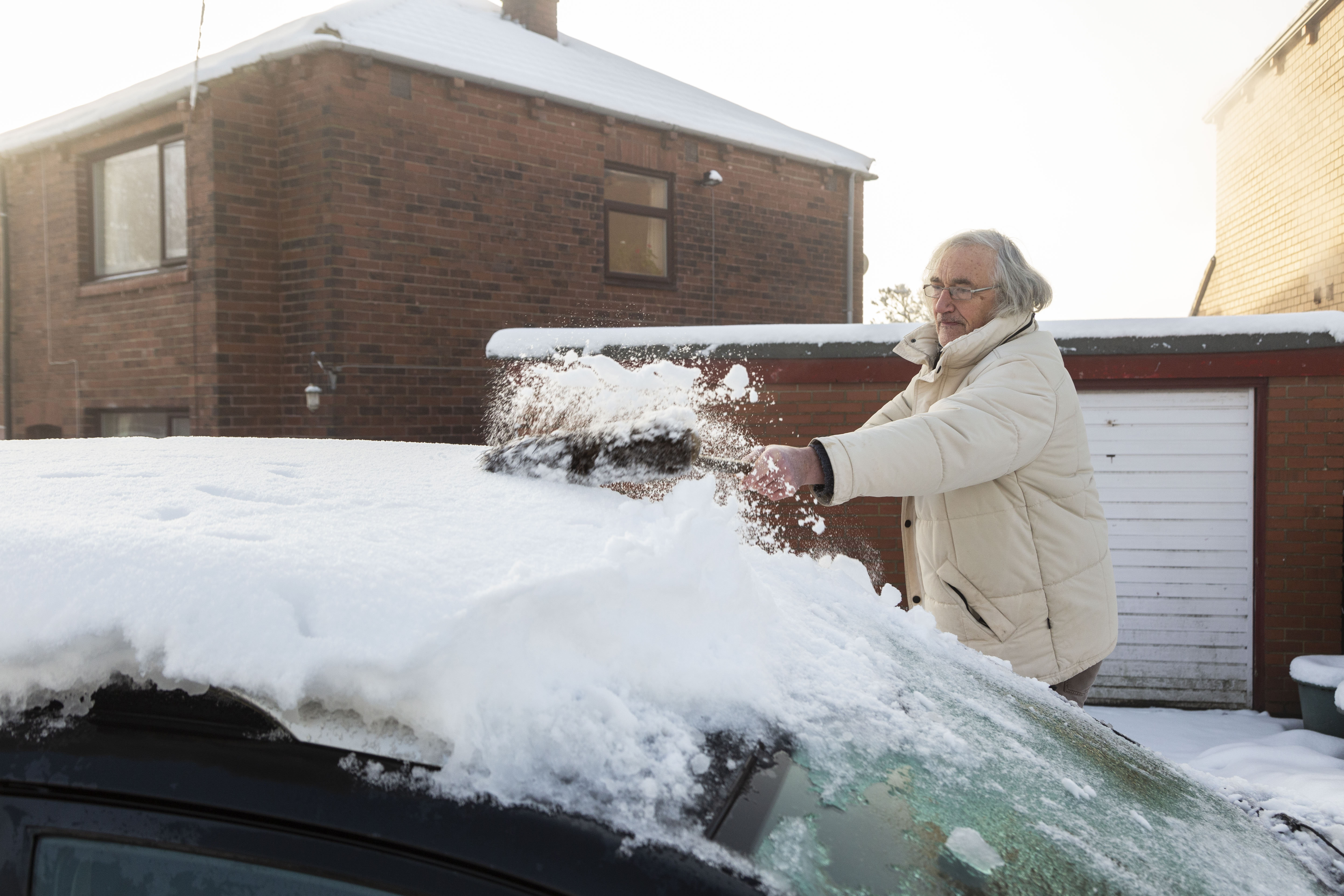 A man cleared snow off his car this morning in West YorksCredit: SWNS:South West News Service 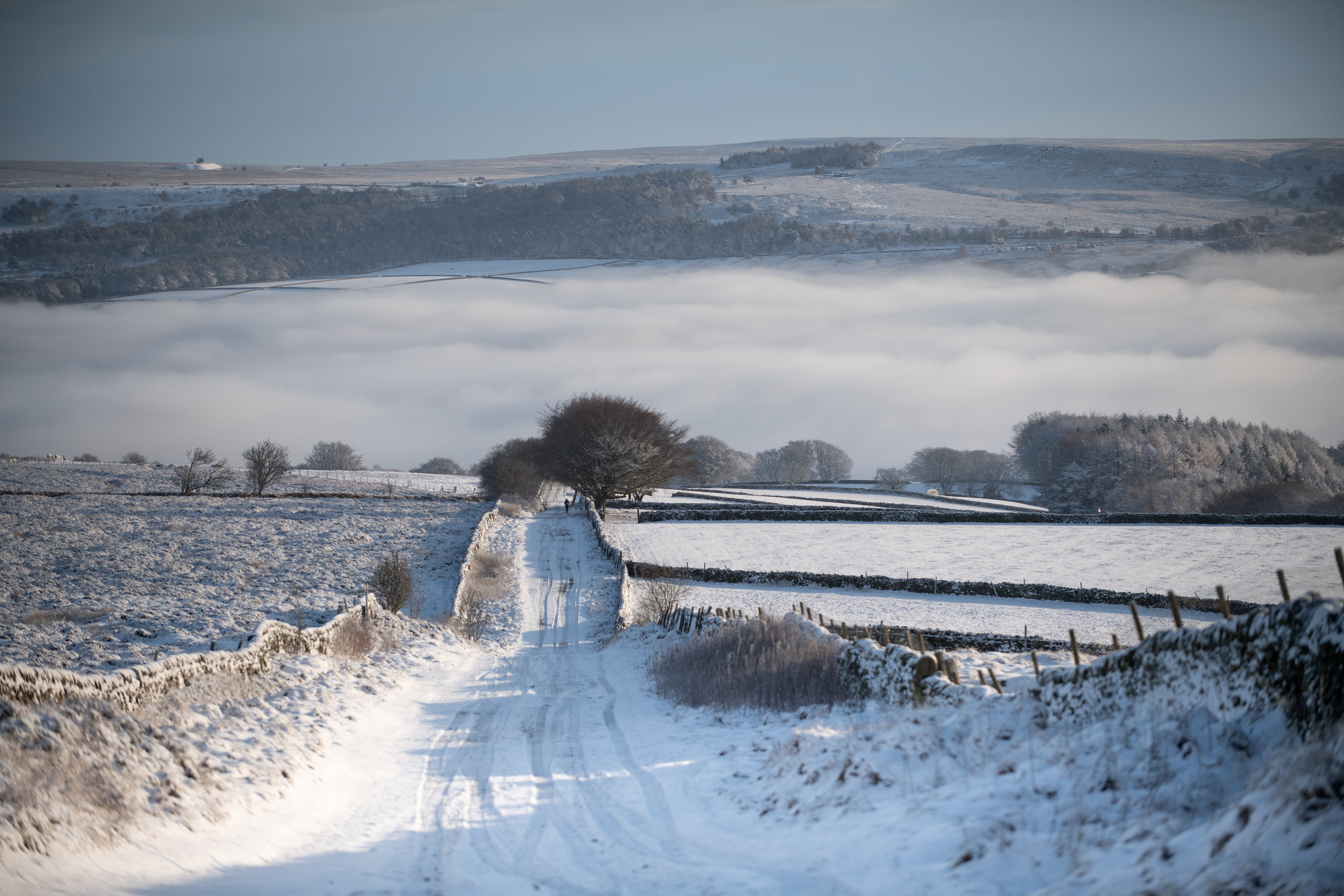 Beeley moor in Derbyshire was blanketed in snow and mist this morningCredit: SWNS:South West News Service 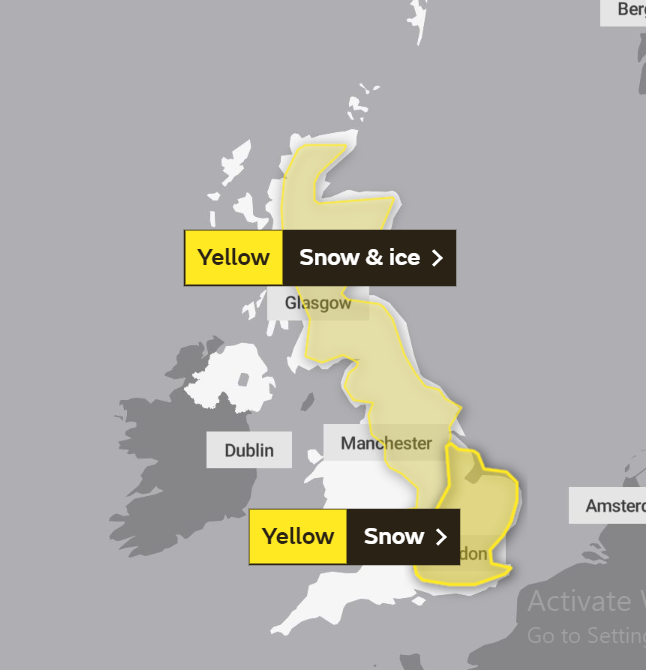 The latest warnings are in place until 8pm on Saturday with East Anglia, Kent and Sussex likely to see the white stuff for the longest period of time.

And the east Midlands, east of England and south east will all be affected by the chill.

Forecasters have warned of travel chaos amid the blast which could leave vehicles stranded and rural communities cut off.

It comes after the whiteout caused mayhem yesterday, leaving drivers trudging through the ice while others were stranded.

A major incident was declared by the Yorkshire Ambulance Service after heavy snow and a surge in patient demand hit hard.

Meanwhile, early risers were seen scooping snow from their driveways in County Durham this morning, as drivers battled to steer through the white stuff in Northumberland and Yorkshire. 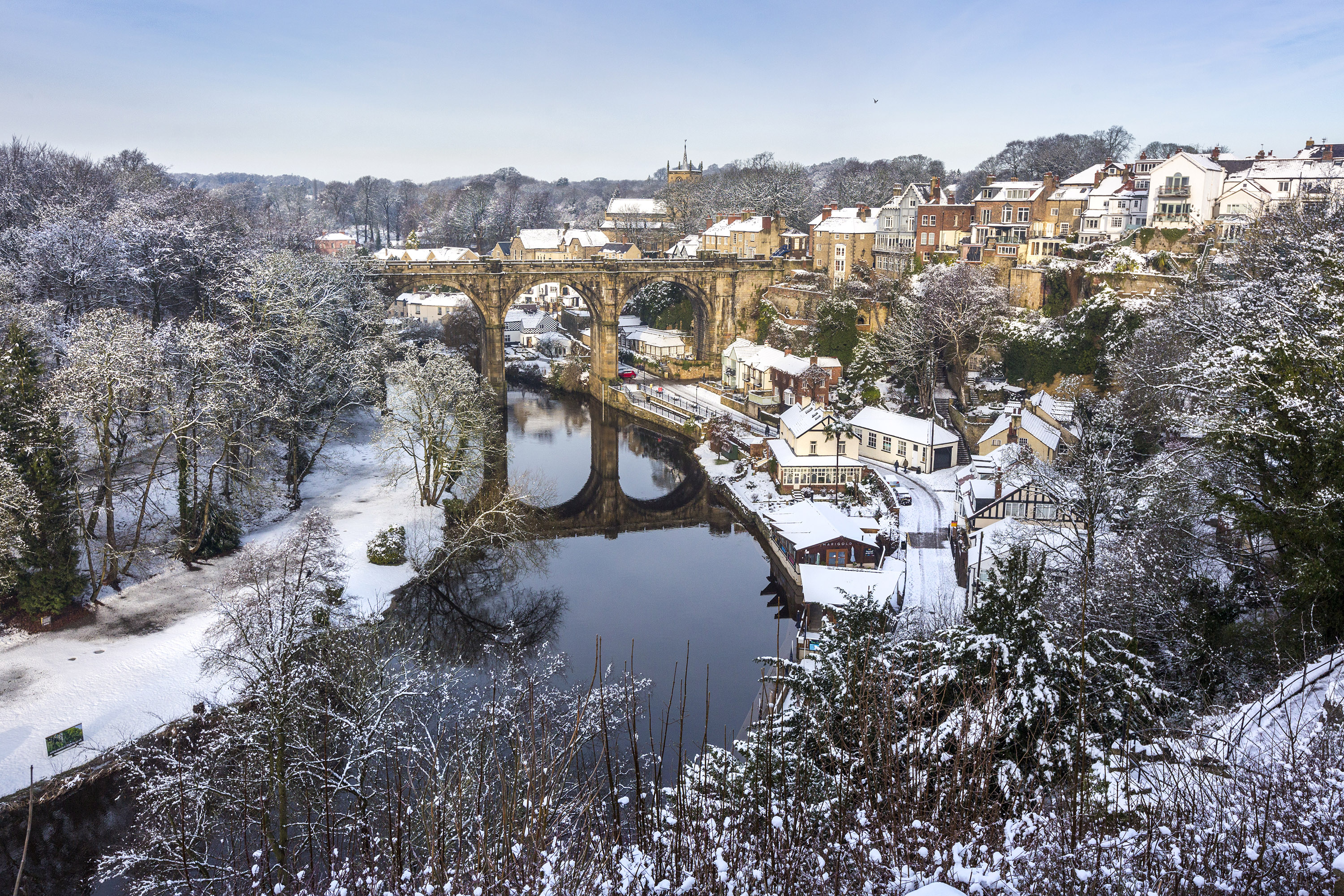 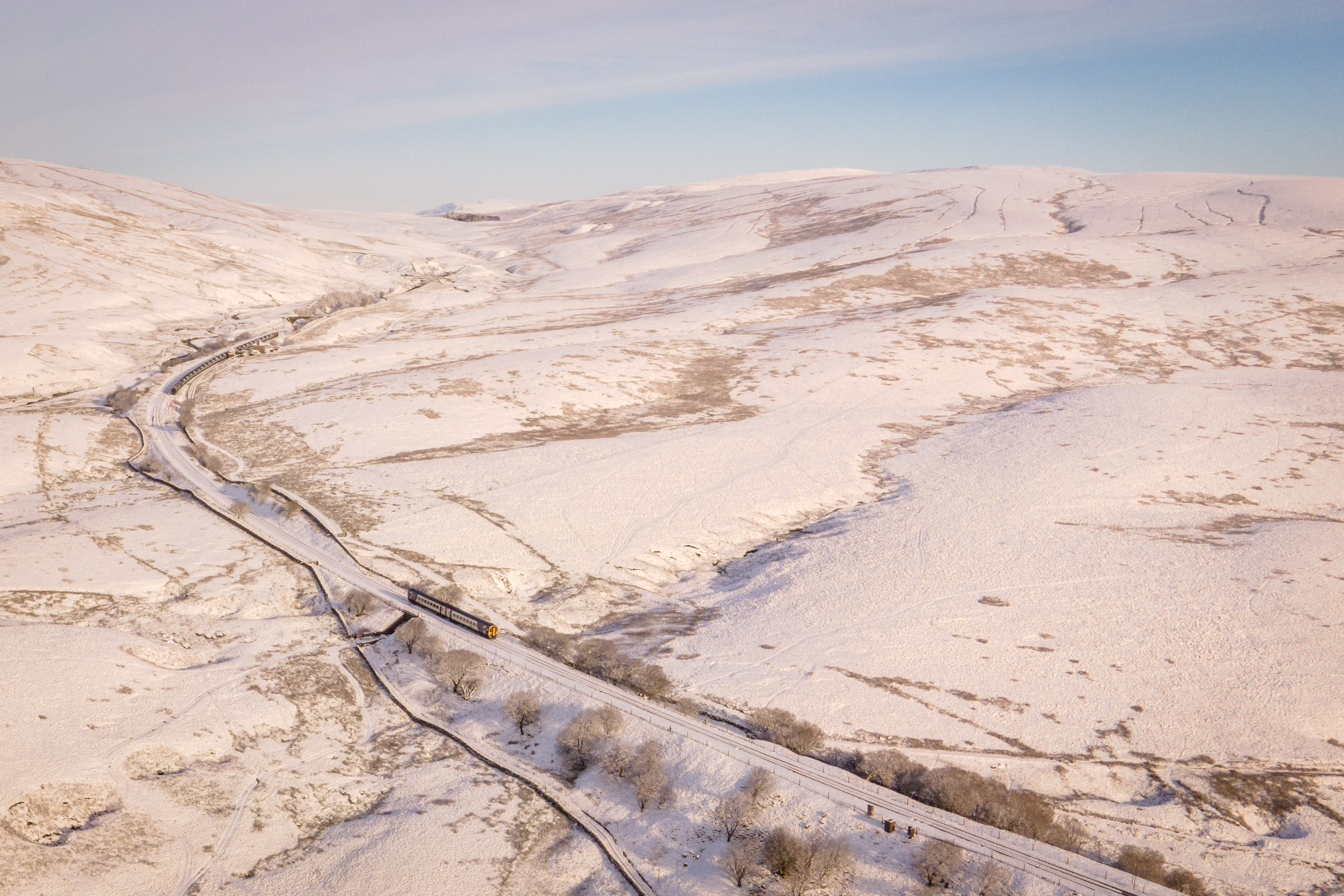 A train passed through a blanket of snow over the Ribblehead Viaduct in North YorkshireCredit: Mercury Press 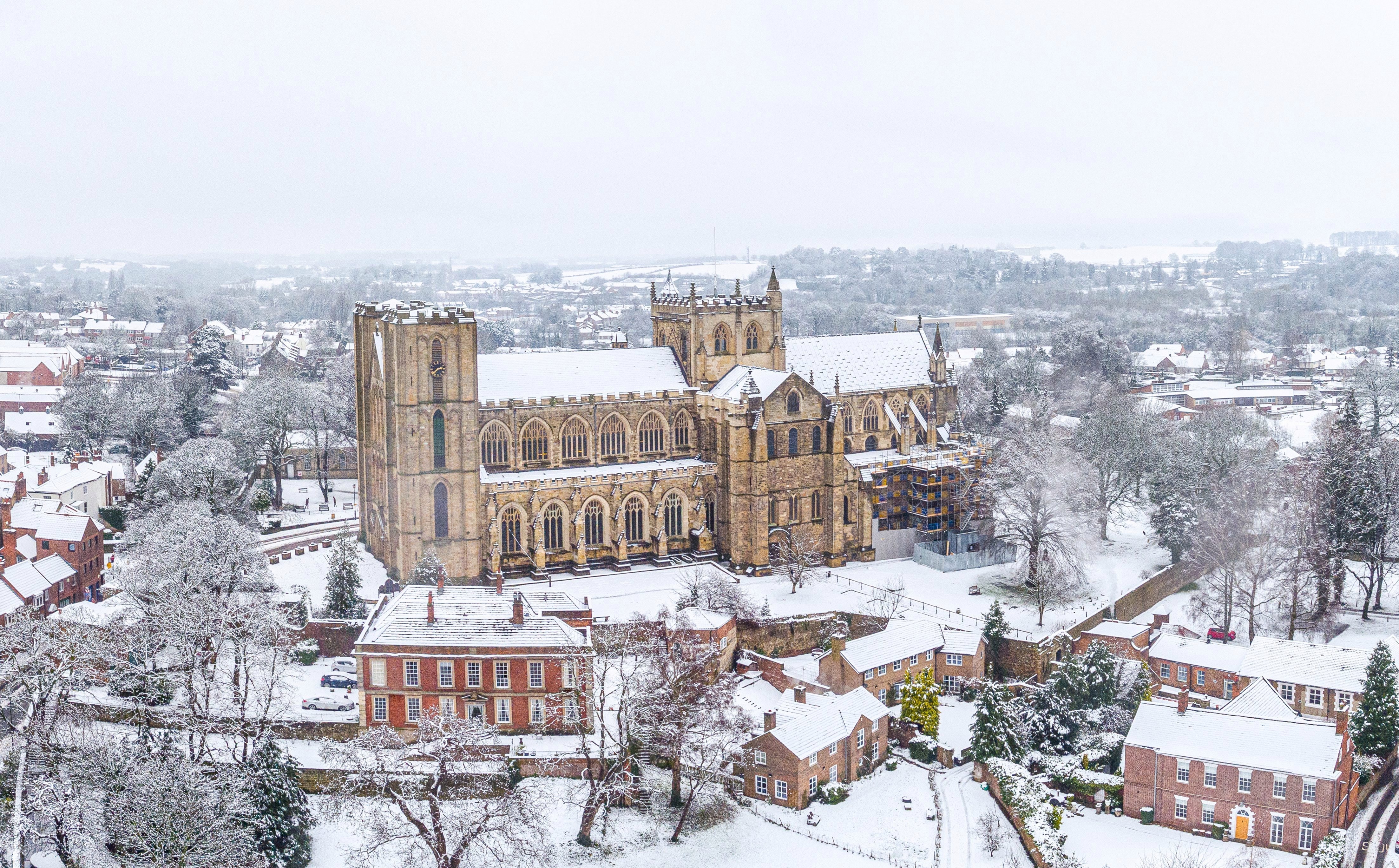 The Ripon Cathedral in North Yorkshire looked more picturesque than ever this morningCredit: Solent News

One driver suffered the worst of the treacherous conditions, their car pictured smashed up against a tree in Leeds.

Another motorist careered out of control in Huddersfield, sliding down a hill before crashing into another car.

Albemarle in West Yorks., recorded 9cm, although the figures off record could be much higher.

“Looking at people’s pictures from today, it could be 15cm,” Met Office forecaster Greg Dewhurst told the Sun Online.

“The heaviest snowfall has passed now and it will gradually ease as we go through to this evening. But it wouldn’t surprise me if a couple more places see another 2-5cm.”

Up to 30cm of snow was expected to fall on Wednesday evening through to Thursday in Scotland, while parts of northern England could see around 20cm.

The Met Office issued an amber snow warning for these areas yesterday, with forecasters warning that some roads may be badly affected.

The alert was changed to a yellow weather warning for snow and ice this morning, and has been extended until 10am on Friday.

A separate warning is in place on Saturday, with northern England and Scotland at risk of snow and ice.

Temperatures as low as -7C blasted the east of England while Scotland was set to plunge as low -12C. 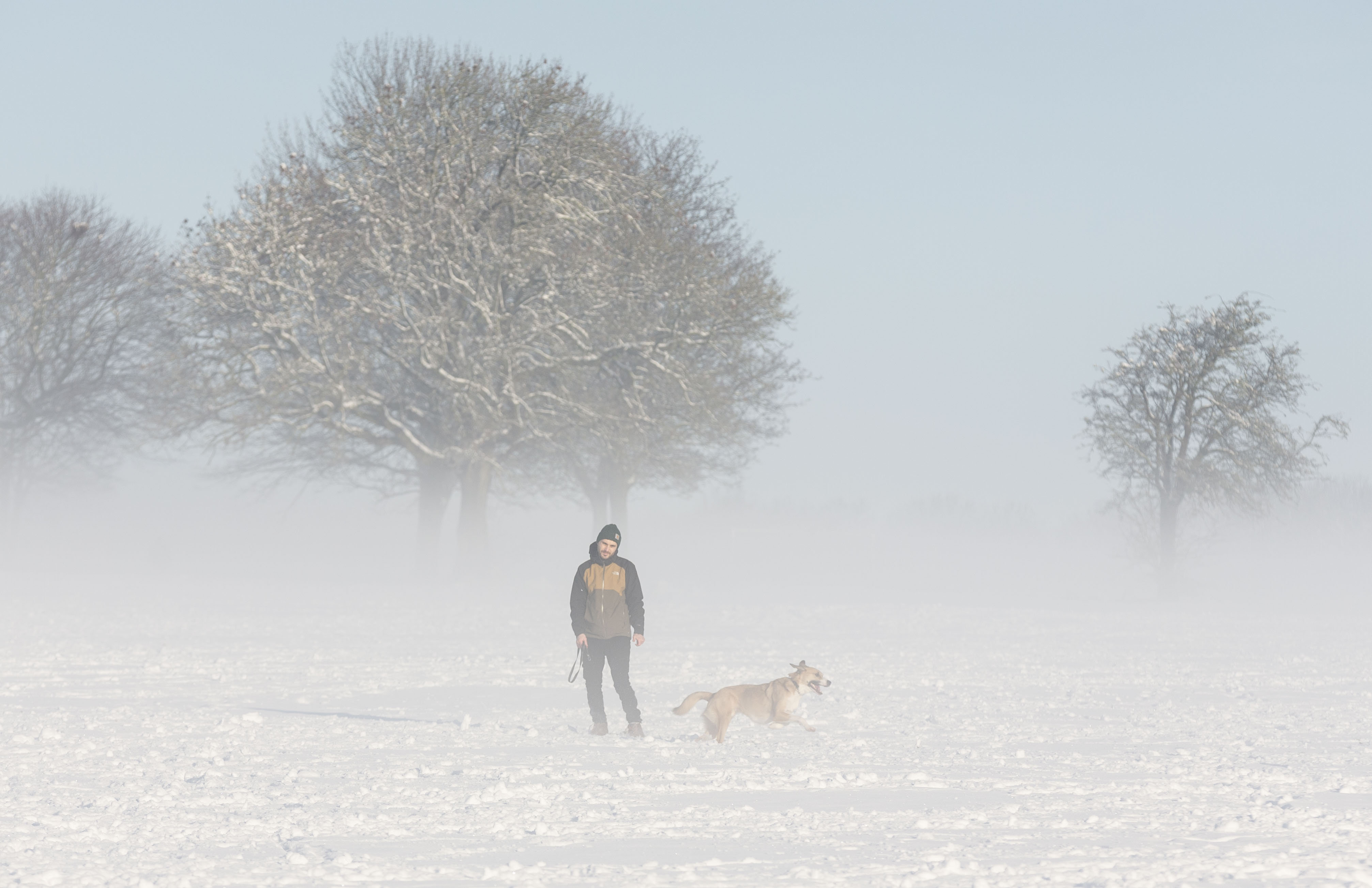 This man walked his dog through the fog and snow in LeedsCredit: SWNS:South West News Service 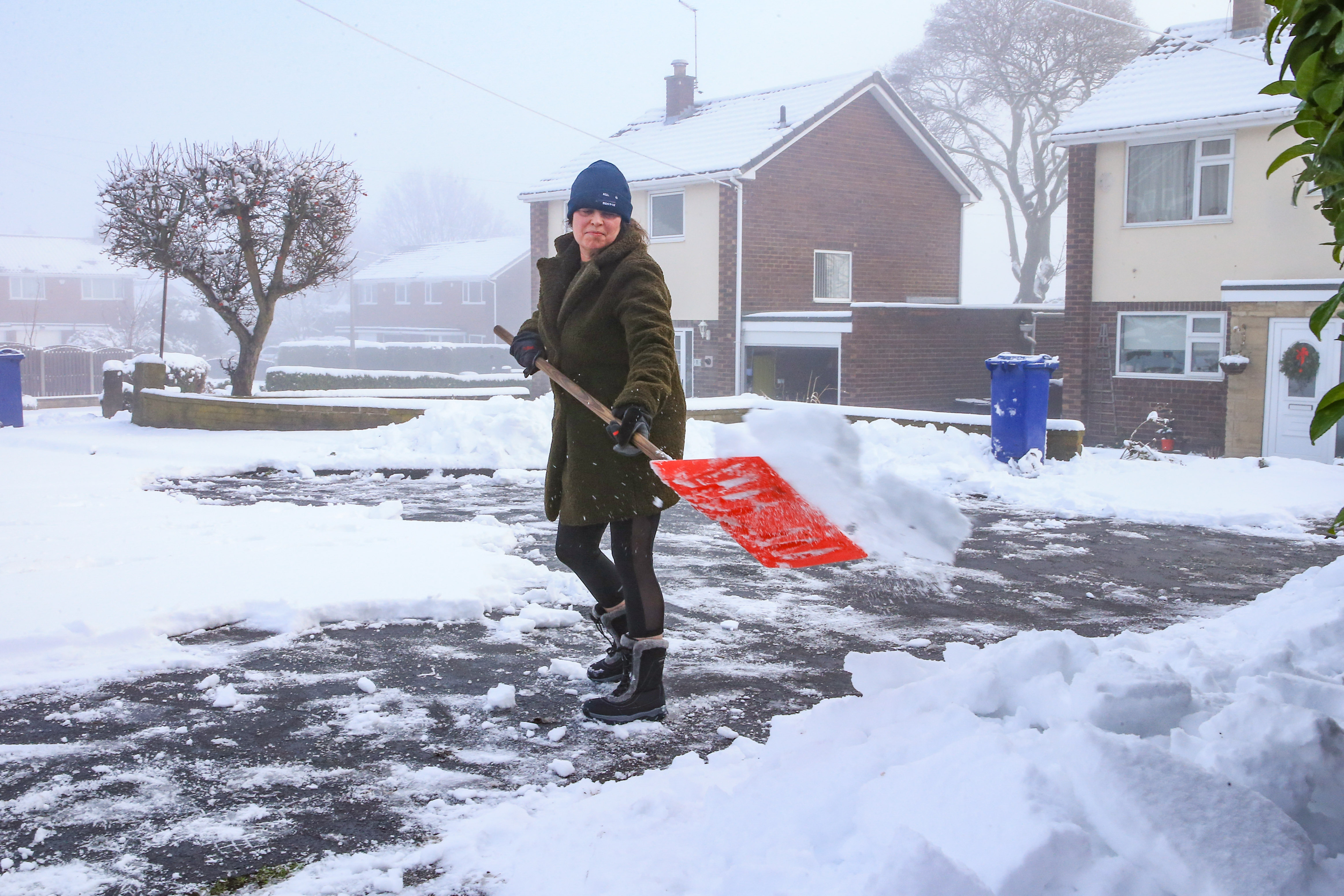 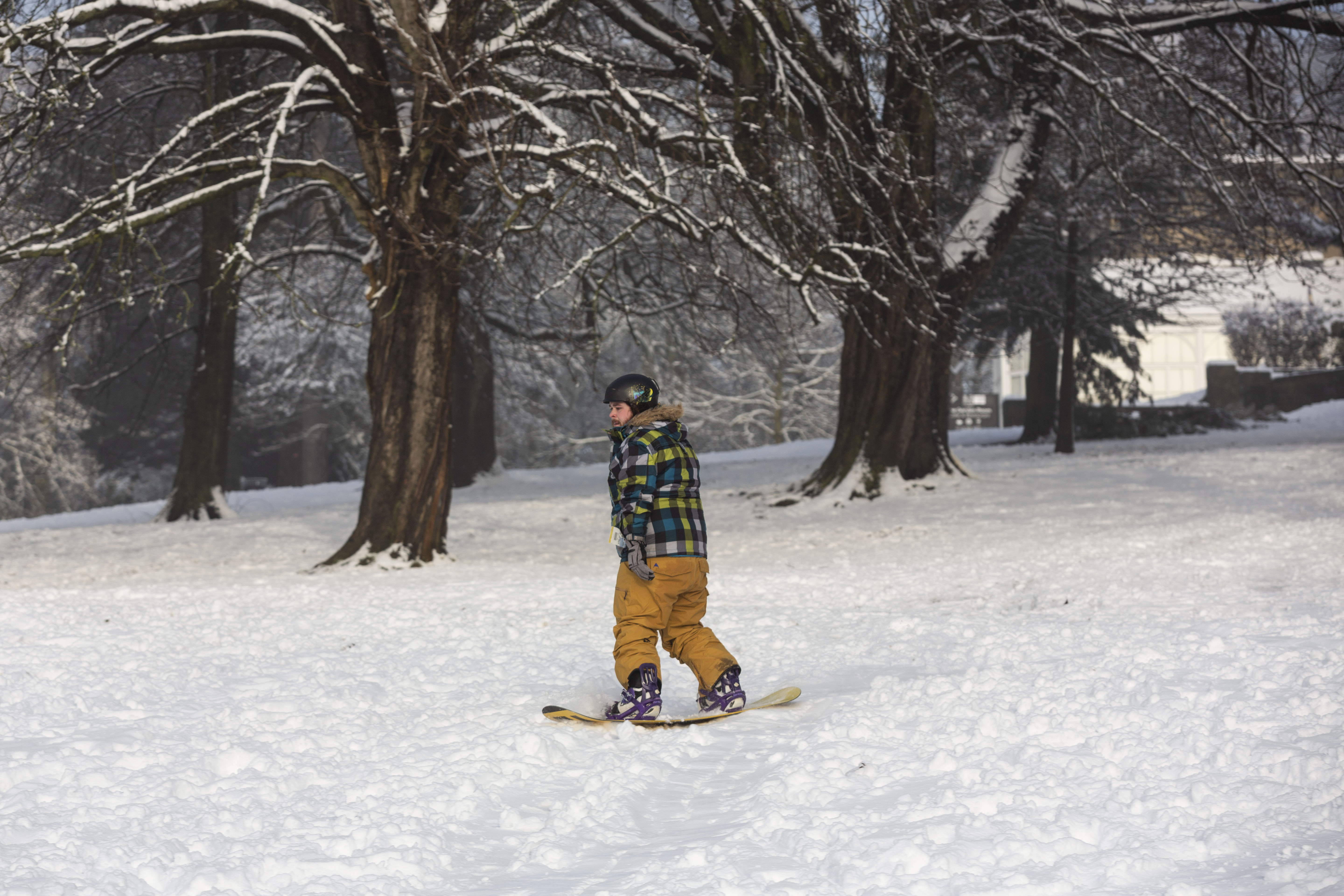 A snowboarder took to the slopes at Roundhay Park in Leeds todayCredit: SWNS:South West News Service 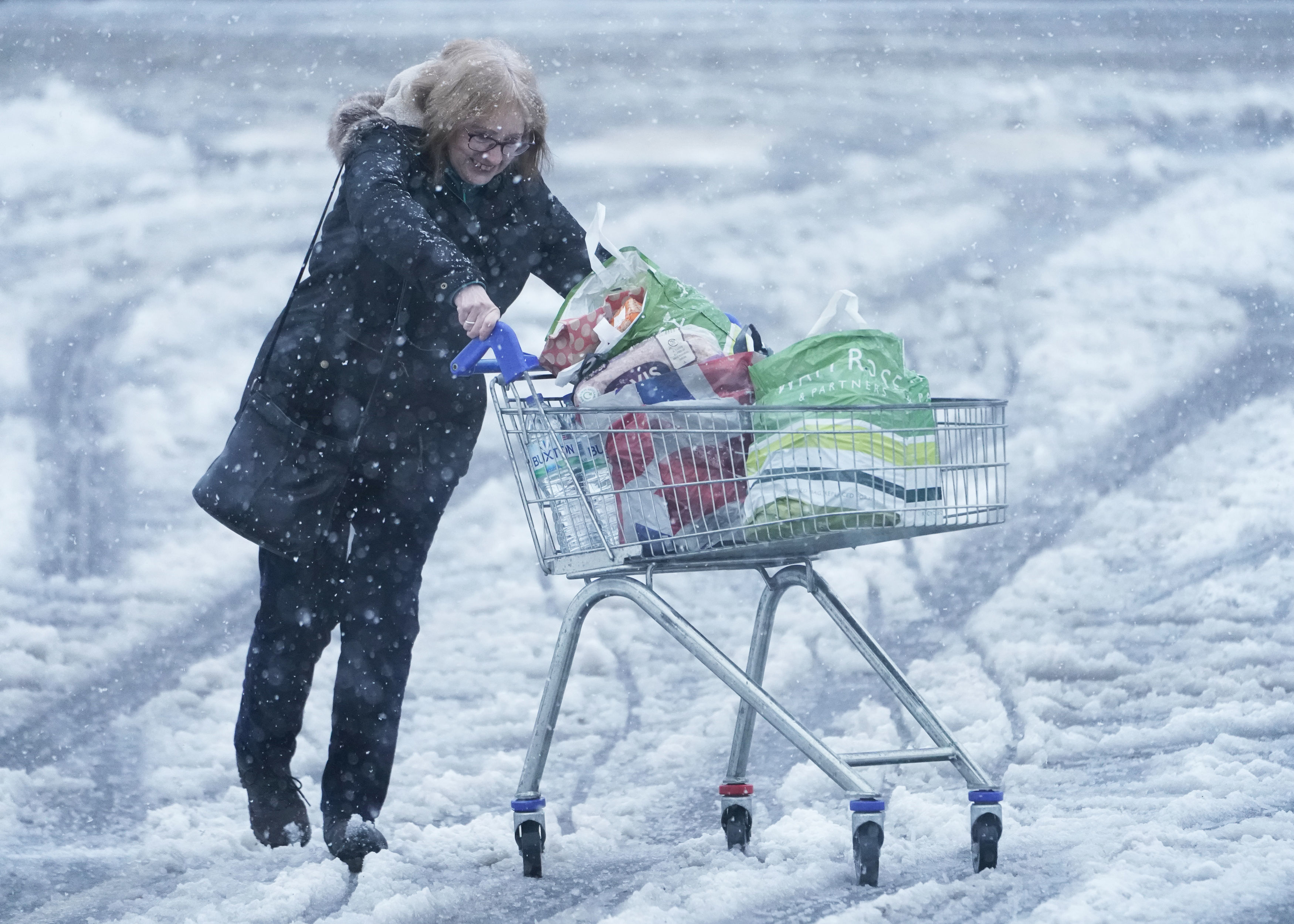 A woman pushes a shopping trolley through snow in Hexham, NorthumberlandCredit: PA:Press Association 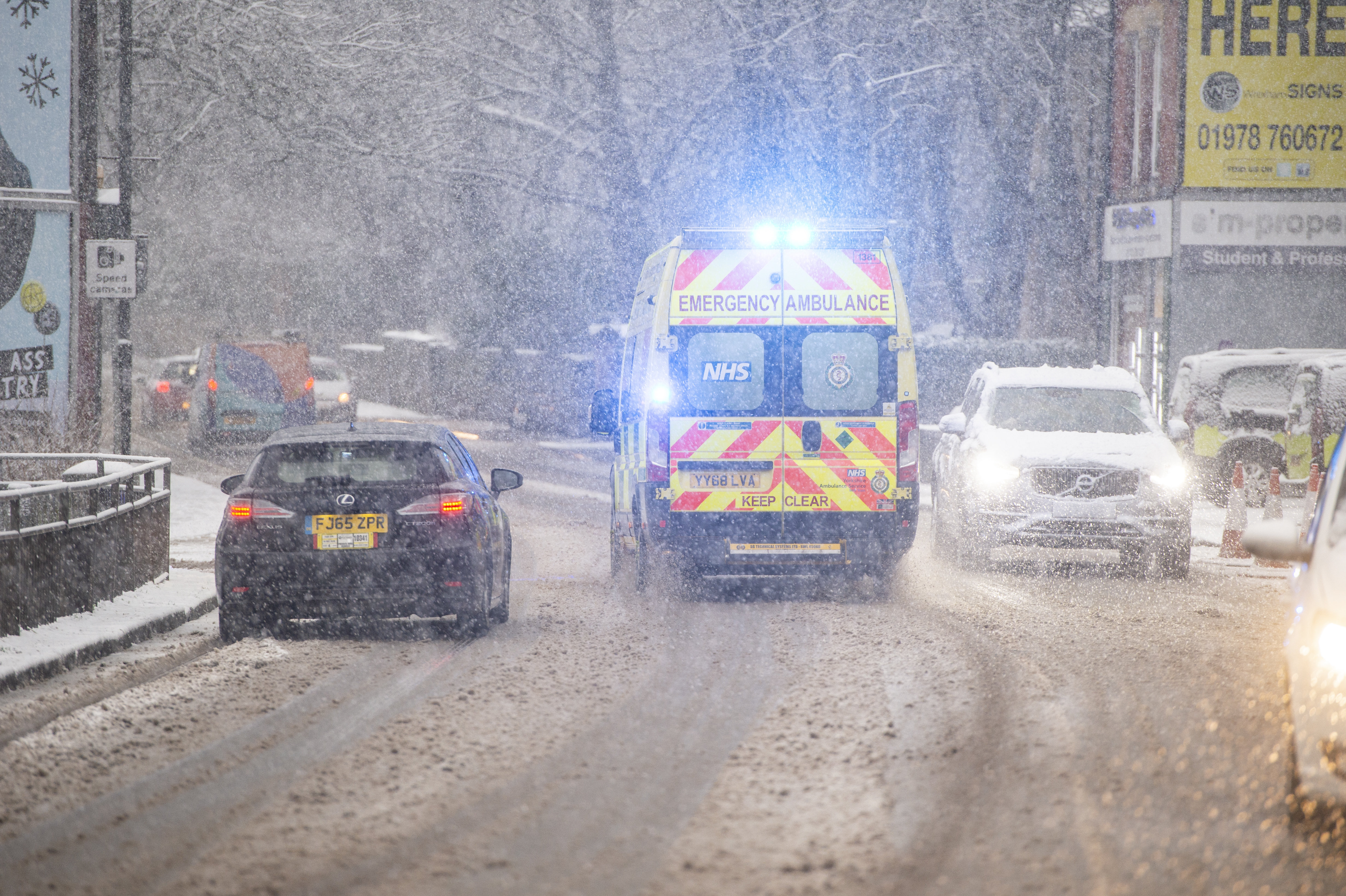 An ambulance made its way through the icy conditions yesterdayCredit: SWNS:South West News Service 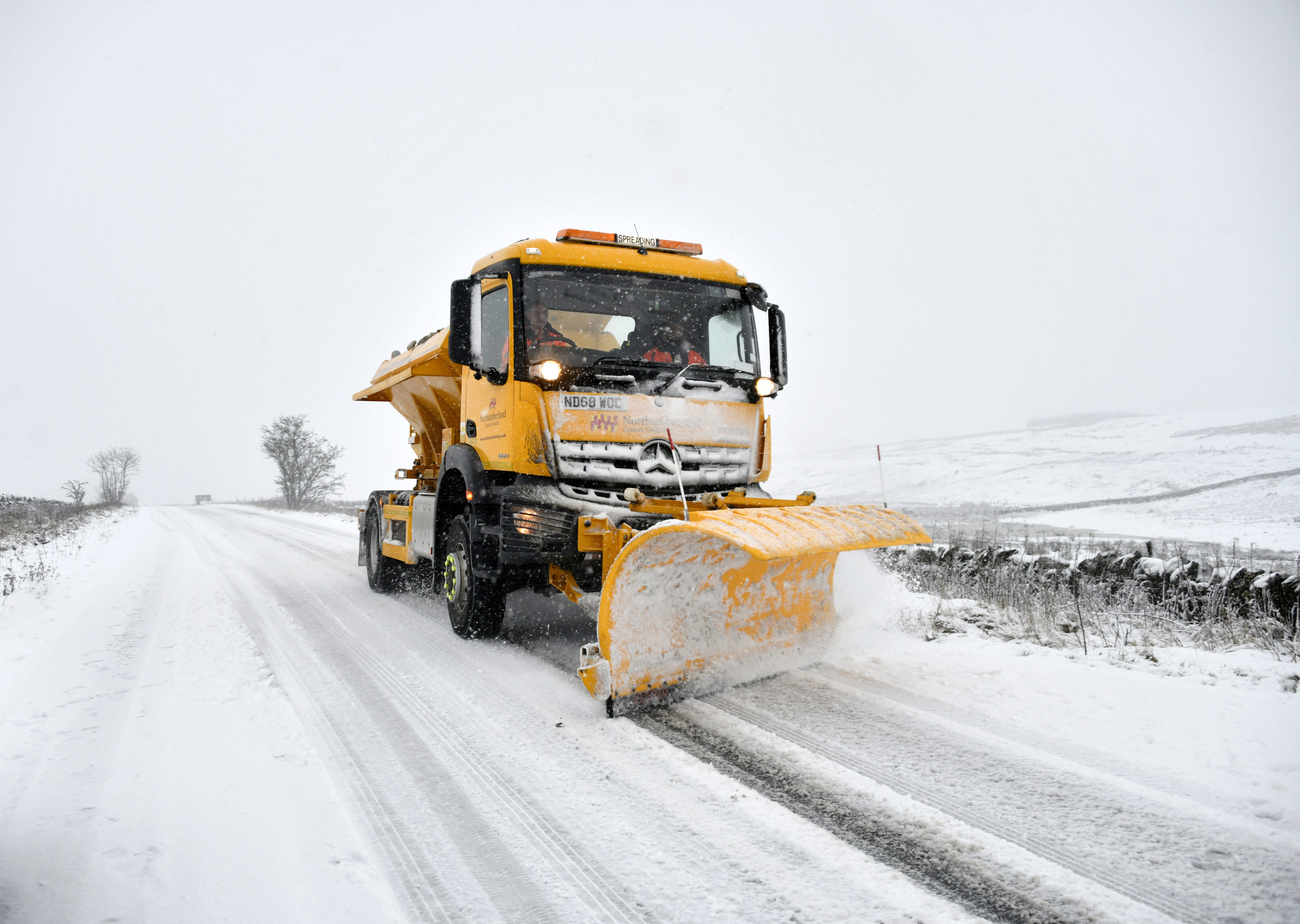 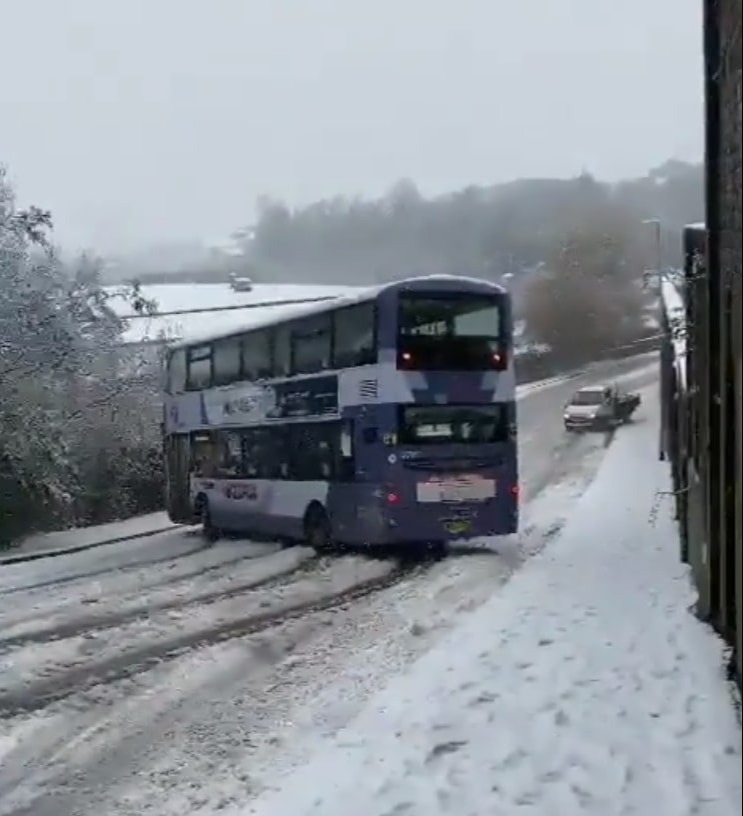 Terrifying footage showed a bus spinning out of control down a hill in HalifaxCredit: MEN Media 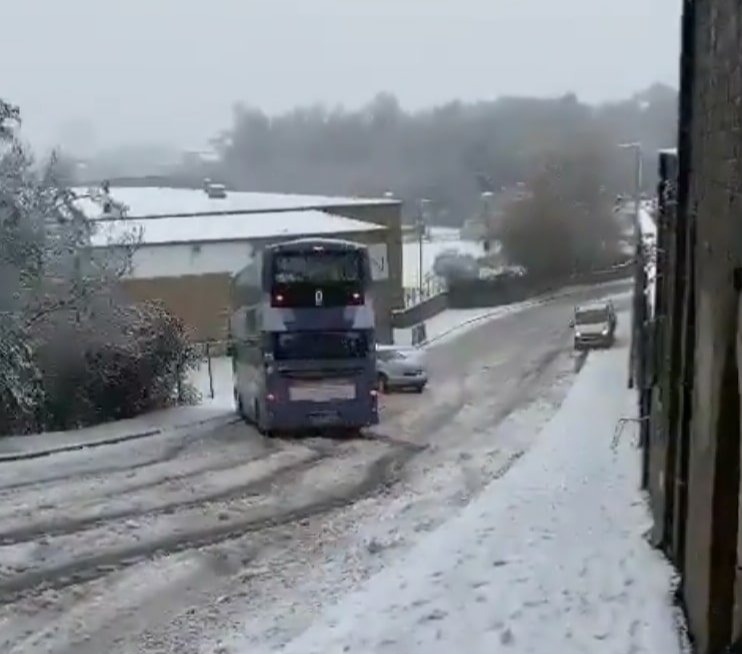 The number zero careered out of control and ended up facing the wrong wayCredit: MEN Media 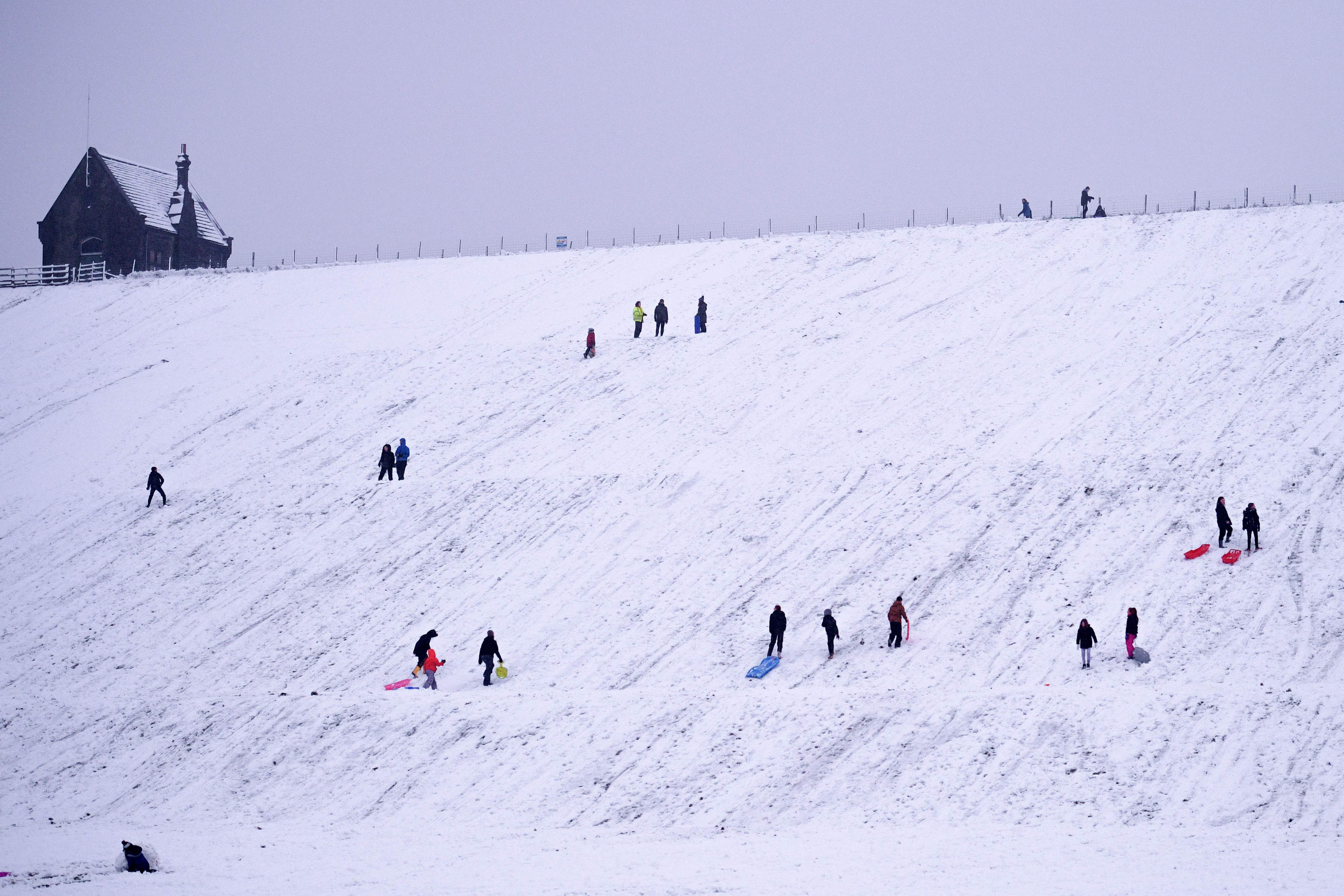 Some made the most of the cold blast with a sledge down the hillside at Butterley Reservoir in MarsdenCredit: AFP or licensors 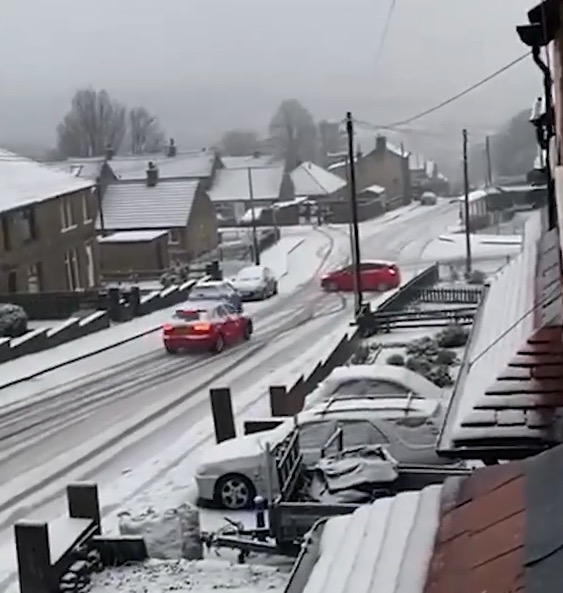 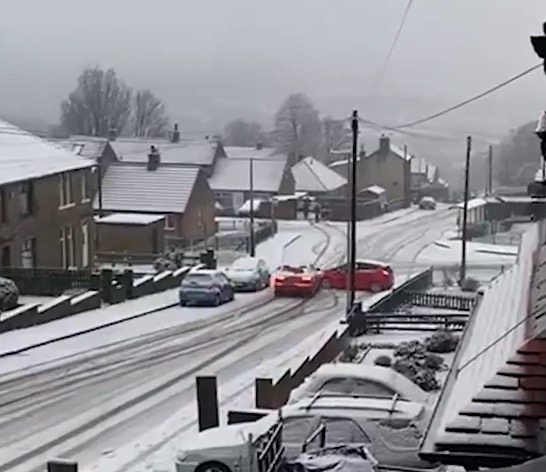 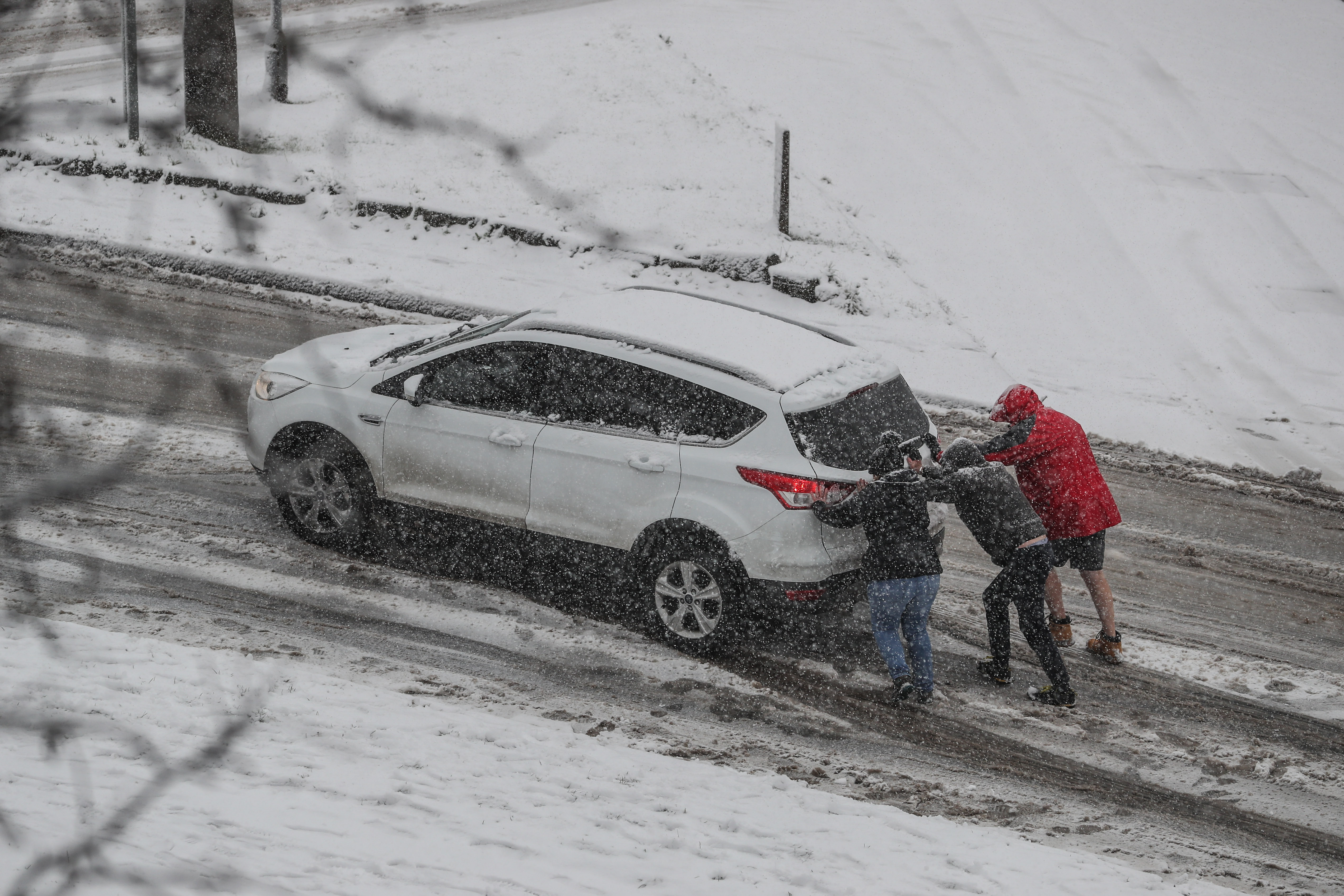 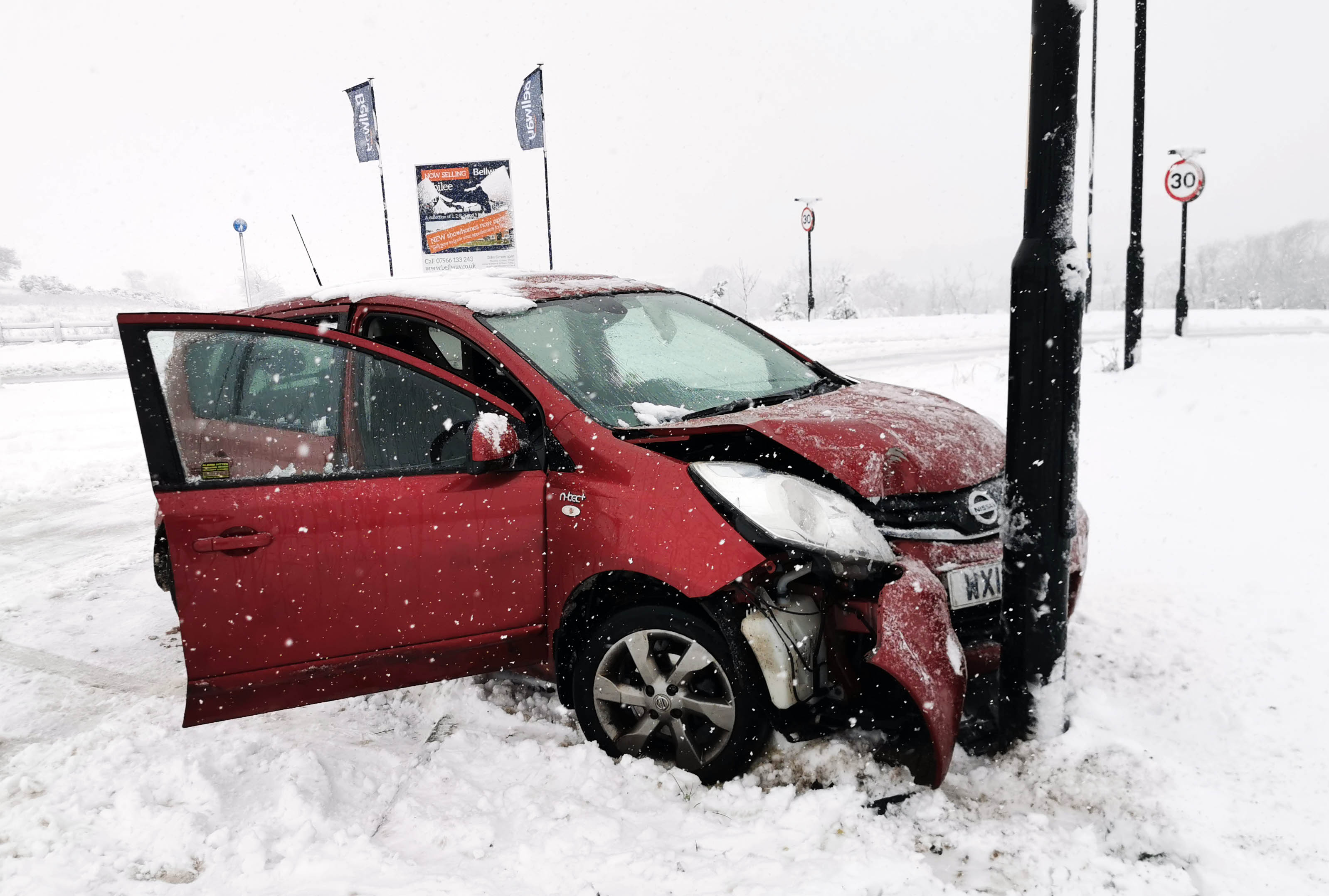 A smashed up car was seen in Leeds as the weather caused traffic chaosCredit: NB PRESS LTD 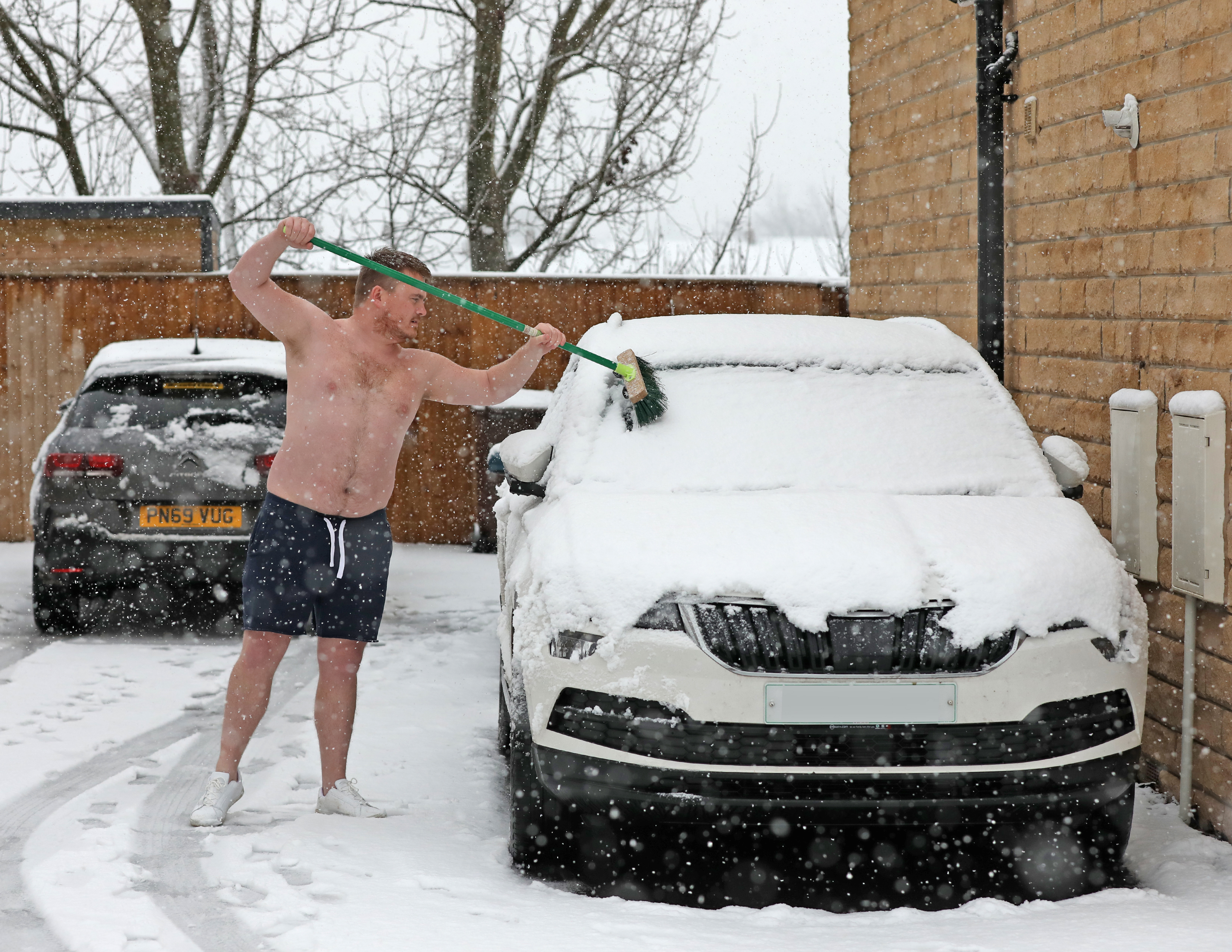 This hardy Brit cleared the snow from his car in Wakefield wearing a pair of shortsCredit: Splash News 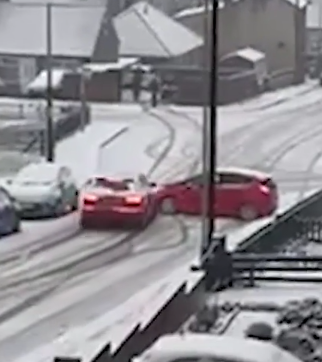 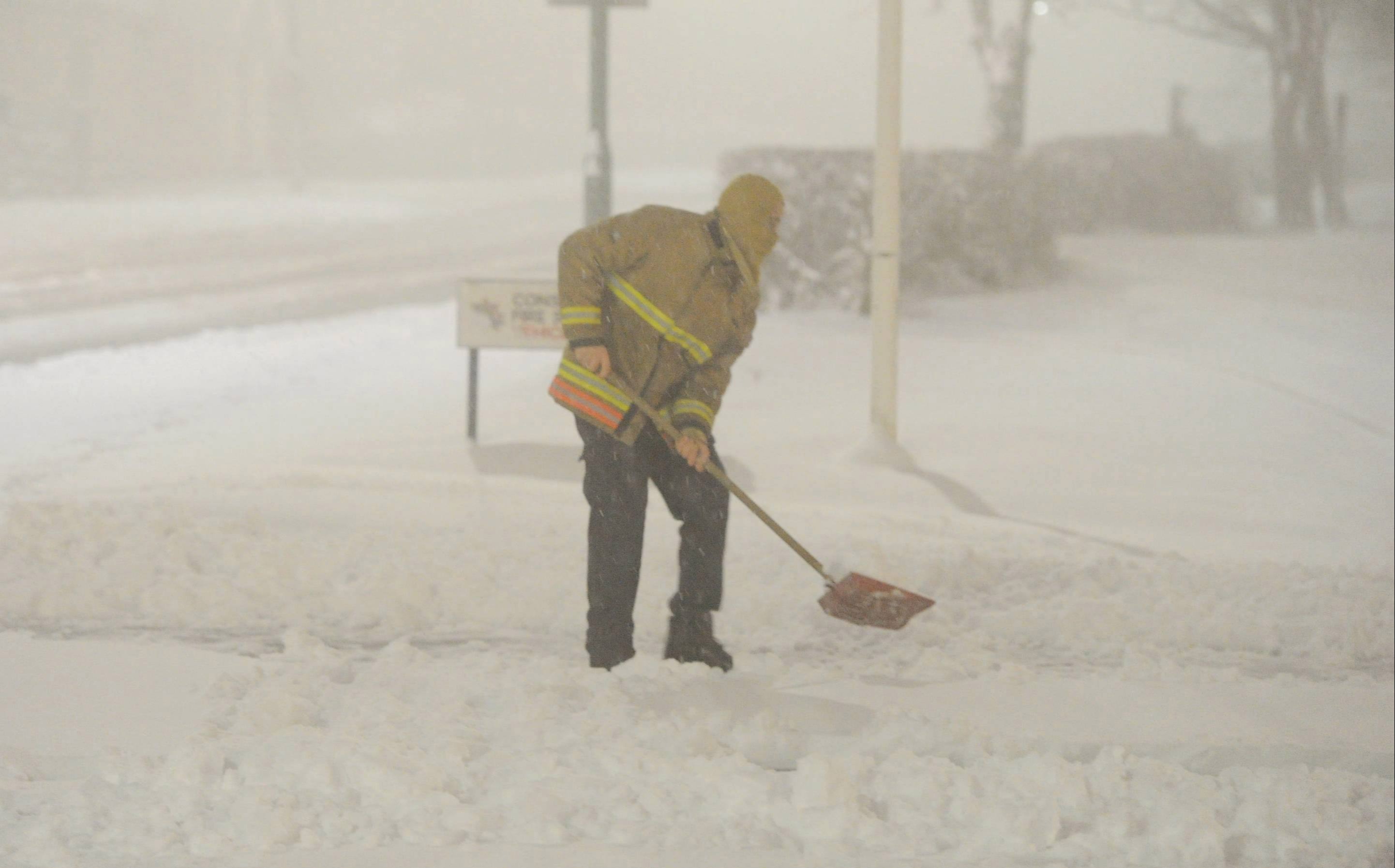 Firemen from Consett Fire Station dug themselves a path out of the fire station in DurhamCredit: North News and Pictures 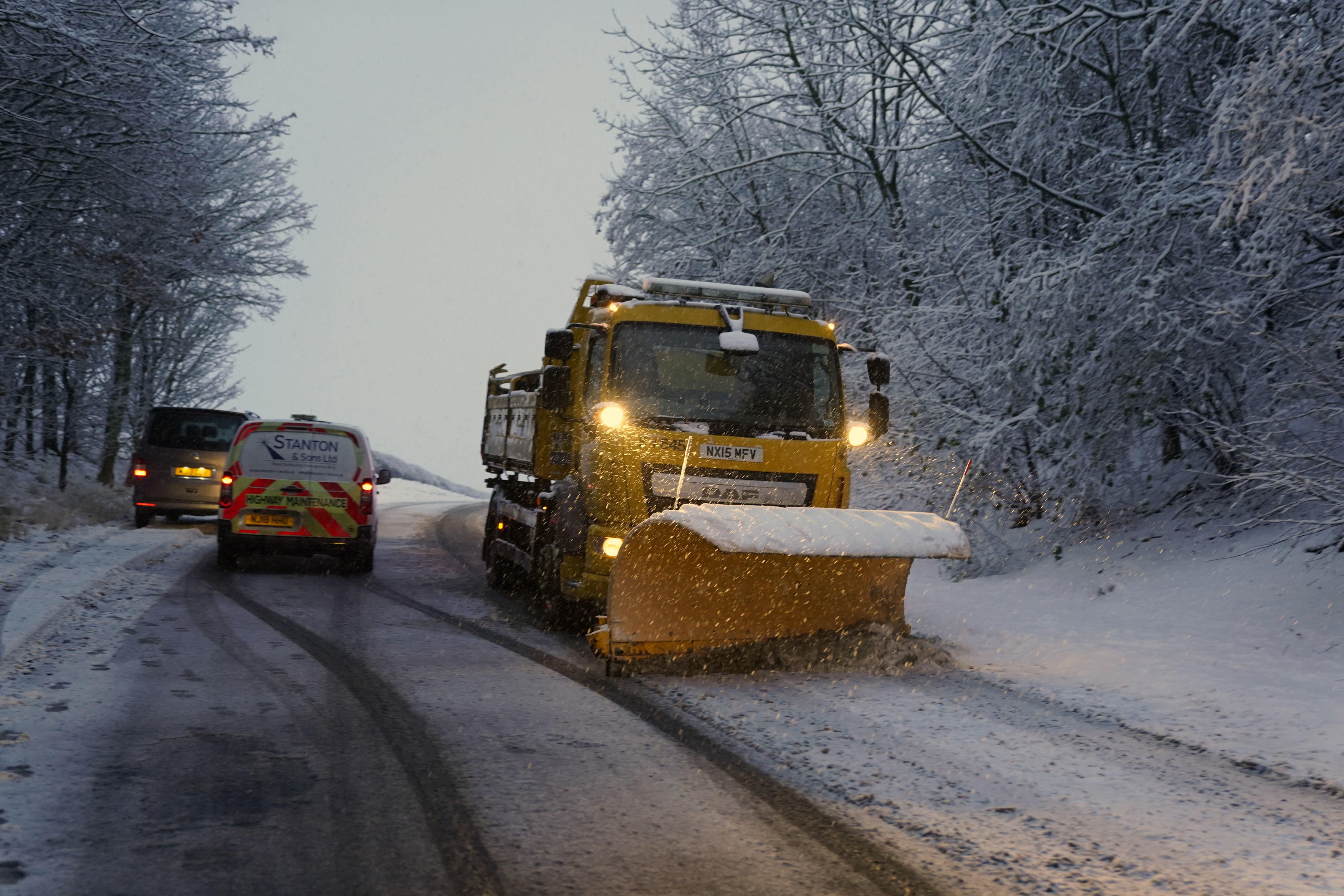 A snow plough cleared the A69 in Stocksfield, near Newcastle this morningCredit: PA:Press Association 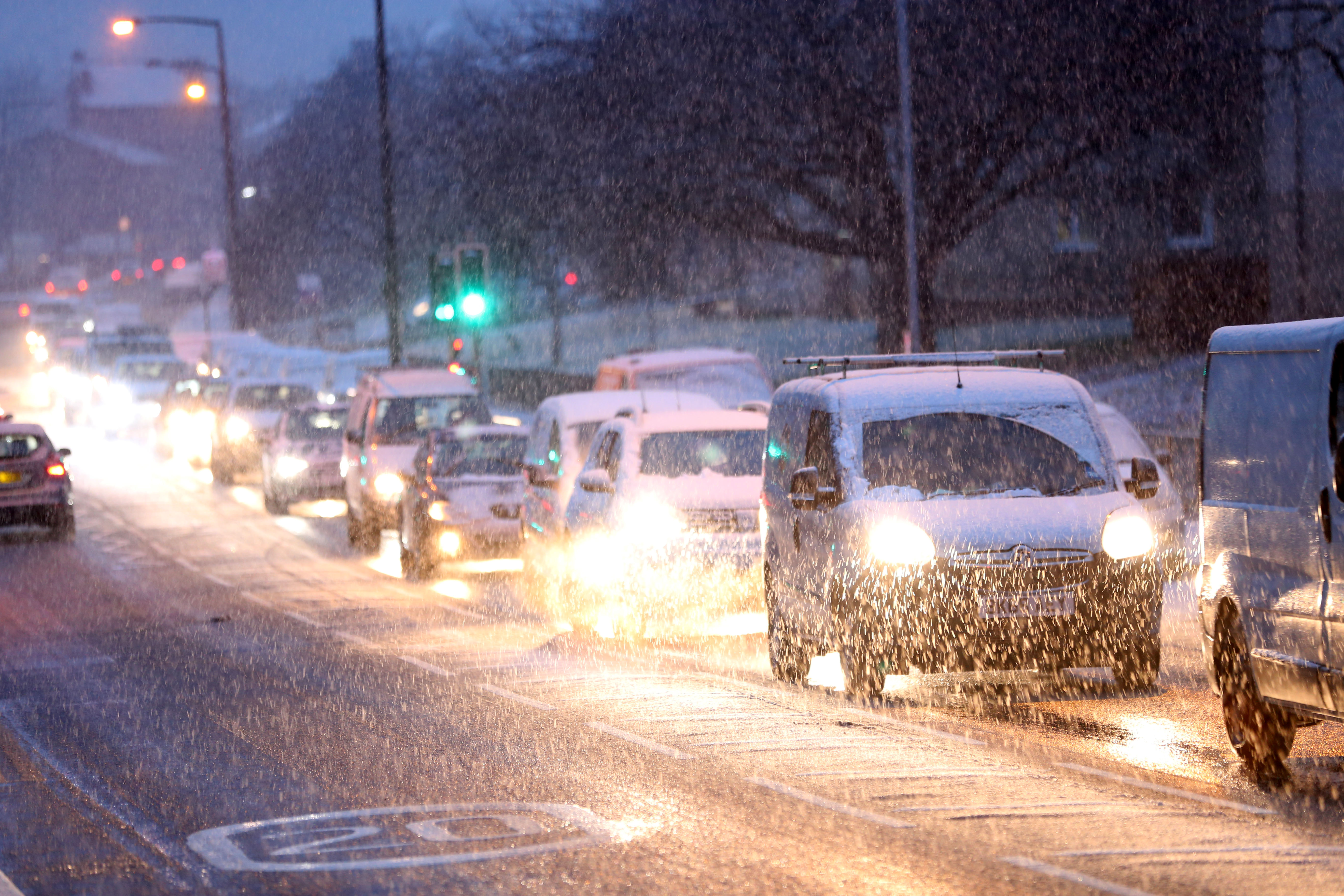