The Ukrainian military has released footage which it claims shows two Russian ‘Raptor’ patrol boats being destroyed in a drone strike.

The vessels were reportedly hit in the Black Sea this morning, where they had been sent to evacuate Russian military personnel from Snake Island, and replace them with new soldiers.

He said the footage showed that the Turkish-made Bayraktar drones used by Ukraine are ‘working well’.

The Ukrainian military added: ‘Together to victory!’

In the footage, a boat is seen seemingly stationary at sea before there is a large flash as it is hit. Another vessel that suddenly tries to speed away is then also destroyed.

The strikes came ‘as the enemy tried to carry out the evacuation and replenishment of personnel of their units remaining on the island using landing speed boats of the Raptor type,’ said Ukraine’s Operational Command South.

The attack has not been independently confirmed, and Russia has not yet responded to the claims.

It comes weeks after flagship Russian warship the Moskva sank, with Ukraine claiming this was due to a missile strike but Moscow insisting it was due to a fire breaking out on board.

Last week Ukraine claimed to have struck the remaining Russian troops occupying Snake Island, whose defenders famously told a battleship to ‘go f*** yourself’ during the opening days of the war.

Project 03160 Raptor high-speed boats such as those reportedly struck today are designed for patrolling, search and rescue operations, landing operations at a maximum distance of up to 100 miles from base. They can be up to 16.9 metres long.

Earlier today, Ukraine admitted that the so-called ‘ghost of Kyiv’ ace fighter pilot who had taken out multiple Russian planes was a myth. 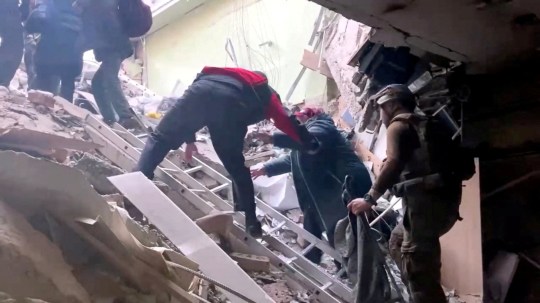 A woman is assisted during the UN-led evacuations from the Azovstal steel plant yesterday (Picture: David Arakhamia/Azov Regiment/Handout via Reuters)

After Russia invaded on February 24, claims of an anonymous hero had spread on social media.

Correcting media reports which had claimed to identify him, the Ukrainian Air Force posted on Facebook: ‘The Ghost of Kyiv is a super-hero legend whose character was created by Ukrainians!’

But they added: ‘The Ghost of Kyiv is alive, it embodies the collective spirit of the highly qualified pilots of the Tactical Aviation Brigade who are successfully defending Kyiv and the region.’

Also today, news came that more than 100 women and children were evacuated from a Soviet-era steel plant in Mariupol where Russian bombs have rained down for two months.

For the first time during the invasion of the port city, a two-day ceasefire is being managed, President Volodymyr Zelensky confirmed over the weekend.

As part of the United Nations-led evacuation, they were boarded onto buses and taken to the Ukrainian-controlled city of Zaporizhzhia, some 141 miles away.