Ukrainian fighter jets soar over a major city as pilots continue to defy expectations that Russia would crush the air force within days.

The MiGs were filmed by an American military veteran on the ground who said the morale-boosting flights have become a regular occurrence despite Moscow’s supposed numerical and technological advantage in the skies.

The ability of Ukrainian pilots to stay airborne has been described as one of the greatest feats of the homeland defence, with Moscow reportedly suffering crushing losses of its supersonic fighter-bomber, the Sukhoi Su-34.

At the start of the full-blown Russian invasion, the Ukrainian Air Force (UAF) had 210 aircraft while Russia was said to have the world’s second-largest fleet of almost 4,000, according to Flight Global’s World Air Forces report. 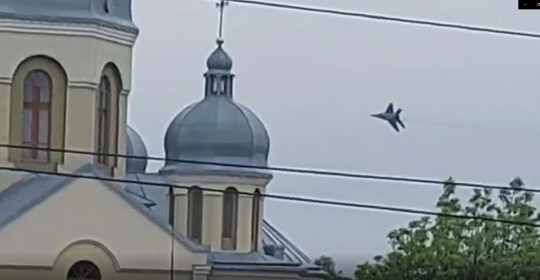 One of the Ukrainian fighter jets passes above a church in the western city of Ivano-Frankivsk (Picture: Dave Eggen) 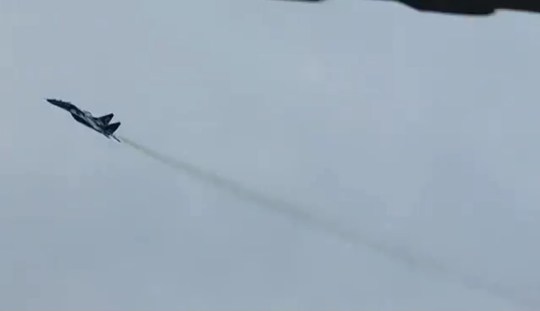 Ukrainian pilots have continued to fly despite Russia having superior numbers of aircraft (Picture: Dave Eggen)

Ukrainian forces have continued to fly despite half of their 43 Soviet MiG-29s estimated to have been destroyed, according to the defence news platform the War Zone.

Former US Marine Dave Eggen, who has taken part in training Ukrainian military recruits, filmed some of the daylight flights from the city of Ivano-Frankivsk in the west.

In one clip a jet passes over the Church of the Virgin Mary, believed to be the oldest building in the city, without being troubled by enemy activity.

‘It’s so cool to see the MiGs and to think they are ours, and not trying to kill us,’ Mr Eggen said. ‘Pretty much every day they are flying over the city.

‘Many people thought the Ukrainian Air Force would be gone in two or three days, but they are still operating.’

A British military expert said the jets are most likely MiG-29s, which have been engaging Russian aircraft and cruise missiles.

The footage is also significant because Russian missile strikes hit an airbase in the Ivano-Frankivsk region during the first months of the war, targeting the 114th Tactical Aviation Brigade.

In spite of the attacks, the brigade’s supporters have said that since the beginning of hostilities in February 2022 it has flown more than 110 sorties, including with other air force units.

While it has suffered combat losses, the Aviatsiya Halychyny fashion brand supporting the brigade has said: ‘Despite this, the brigade doesn’t lose heart and still protects our homes in memory of the deceased fellows.’

A separate video released by the UAF shows a pilot named Ivan in a MiG-29 that military analysts say has been retrofitted to fire US-made anti-radar missiles. The cockpit footage shows the AGM-88 High-speed Anti-Radiation Missiles (or HARMs) blasting out from under the wings of the jet.

The weapons are primarily used to take out enemy air defence radar systems, which can be linked to surface-to-air missiles.

Shot on a helmet cam, the video is dedicated to the memory of MiG-29 pilot Major Yevhen Lysenko, who is said to have died during an air battle near Zhytomyr in western Ukraine. 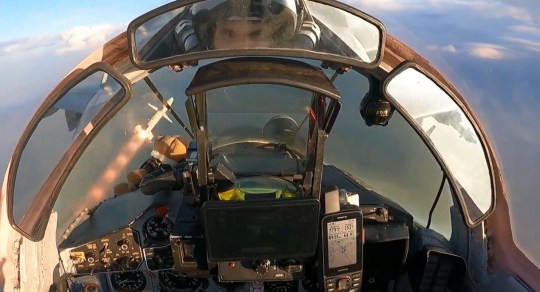 A missile is fired from under the wing of a Ukrainian MiG-29 fighter jet upgraded with US-supplied hardware (Picture: Ukrainian Air Force) 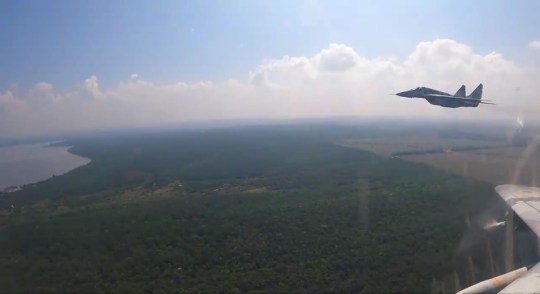 Ukraine has been calling on its western allies to provide aircraft so it can close the skies to Russian forces (Picture: Ukrainian Air Force)

Wartime president Volodymyr Zelenskyy has called on the US and other Western nations to supply more advanced jets such as F-15s and F-16s.

While Washington has so far resisted the calls, the presence of its weapons system shows support is being provided in other ways.

Ukrainian fighter pilots and their supporters have launched the #buymeafighterjet campaign, which aims to upgrade the air fleet with international donations and low-cost aircraft.