A number of US-based airlines have raised fears over the potential for 5G signals to disrupt aviation equipment and ground planes.

In a letter sent to the White House, the bosses of carriers including American Airlines, Delta Air Lines, United Airlines, and Southwest Airlines said they were worried about C-Band 5G networks.

Citing the interference from nearby cell towers on the equipment in widebody passenger planes, the letter says the result could be ‘chaos’.

‘Unless our major hubs are cleared to fly, the vast majority of the traveling and shipping public will essentially be grounded,’ the letter said.

The letter, obtained by Reuters, said the problem could ‘potentially strand tens of thousands of Americans overseas.’

It added: ‘To be blunt, the nation’s commerce will grind to a halt.’

The airline companies say they want telecoms networks like AT&T and Verizon to avoid activating any 5G cell towers within two miles of an airport to avoid the ‘catastrophic disruption’ to flights.

They are worried that the ‘C-Band’ spectrum used to carry the 5G signal could affect electronics, like altimeters, that rely on frequencies located between 4.2 and 4.4GHz to operate.

‘Multiple modern safety systems on aircraft will be deemed unusable causing a much larger problem than what we knew,’ the letter reads.

‘Airplane manufacturers have informed us that there are huge swaths of the operating fleet that may need to be indefinitely grounded.’ 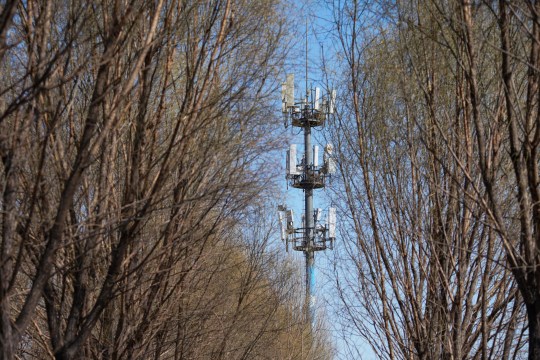 Here in the UK, the Civil Aviation Authority has dismissed any worries that 5G could affect the equipment on board planes.

‘There have been no reported incidents of aircraft systems being affected by 5G transmissions in UK airspace, but we are nonetheless working with Ofcom and the Ministry of Defence to make sure that the deployment of 5G in the UK does not cause any technical problems for aircraft,’ confirmed the CAA.

It pointed out that C-Band 5G is already operational in many countries around the world with no adverse effects on plane travel.

‘The UK’s mobile network operators follow all health and safety guidelines and engage with a variety of industries on interference,’ said Gareth Elliott, Head of Policy and Communications at Mobile UK.

‘Mobile operators are actively coordinating with the aviation authorities to ensure no interference in the UK.’

Ofcom added: ‘We’re aware that the aviation sector is looking at this; we’ve done our own technical analysis and are yet to see any evidence that would give us cause for concern.’