Yorkshire: woman’s shock after ‘spotting 4ft crocodile’ in back garden

A family in Yorkshire have spoken of their disbelief after spotting what they think is a crocodile on the loose in their neighbour’s garden (Picture: MEN Media)

A woman is convinced a small crocodile has been let loose and is living in West Yorkshire.

The creature, dubbed the ‘Castleford Croc’, was seemingly pictured roaming around a back garden near the River Aire.

Sarah Jayne Ellis, who works as a nurse, was shocked to stumble across the fearsome-looking beast lurking in her neighbour’s garden and quickly took a snap – just in case no one believed her.

She said the animal was about three or four feet long and ‘looked real’, adding: ‘I thought, “That is a crocodile.”

‘I was shutting the blinds in the bedroom when I saw it on the grass. I looked a couple of hours later and it was gone.’

But for some reason she said did not investigate any further as she had just done a night shift and needed to sleep.

She later showed the picture to her sister-in-law Kate Ellis Holmes, a deputy headteacher, who said her family members were all shocked at the sighting. 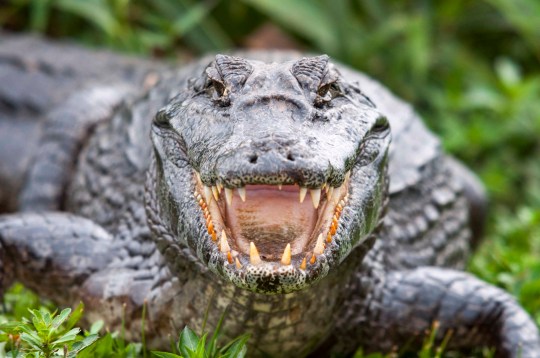 Ms Homes added: ‘I was just genuinely in disbelief when she was telling the story.

‘I thought it was bizarre and a really interesting story. It definitely looks like a crocodile.’

The sighting of the ‘Castleford Croc’ is just the latest in a number of similar reports for the area and Ms Ellis believes the possible existence of a crocodile in the town needs to be investigated.

In May last year, Yorkshire wildlife snapper Lee Collings was also shocked to stumble across a crocodile or a caiman on a visit to the Fairburn Ings nature reserve.

He was, however, unable to get a picture of the reptile before it scuttled away after just a few seconds.

Initially people ridiculed Mr Collings thinking it was not true, but later more people came forward claiming to have seen something similar at another nearby lake.

Four feet is small for a crocodile, with their average length between 13 and 19 feet.