A man walks past a graffiti depicting children with Russian flags in Luhansk (Picture: AP)

Volodymyr Zelensky insisted Ukraine will continue to defend its people living under occupation after the Kremlin announced four areas have voted to join Russia.

In his nightly video address, the Ukrainian president said the so-called referendums were a ‘farce’.

Moscow claimed on Tuesday that residents in the Donetsk, Luhansk, Zaporizhzhia and Kherson regions have all voted overwhelmingly in favour of being incorporated into Russia.

Election officials installed by the Kremlin said 93% of the ballots cast in Zaporizhzhia supported joining, as did 87% in the Kherson region, 98% in the Luhansk region and 99% in Donetsk.

The votes are widely viewed as a pretext for announcements that Russia is annexing the territories, just as it annexed Crimea in 2014.

President Zelensky said: ‘This farce in the occupied territories cannot even be called an imitation of a referendum.’ 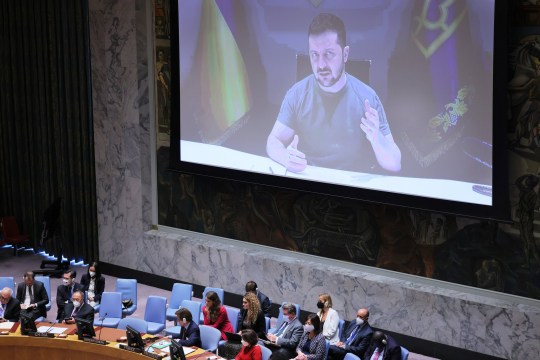 The preordained outcome sets the stage for a dangerous new phase in the seven-month war.

Russia has promised ‘full protection’ for the regions of Ukraine it plans to annex.

Asked whether that would include nuclear weapons, foreign minister Sergey Lavrov said ‘all of Russia’s laws, doctrines and concepts’ would apply.

The country’s nuclear doctrine allows use of the weapons if it faces an ‘existential threat’. It is feared Moscow would consider any attempt by Ukraine to seize back control of the territories as such.

The referendums asked residents whether they want the areas to be incorporated into Russia, and the Kremlin has portrayed them as free and fair, reflective of the people’s desire for self-determination.

Tens of thousands of residents had already fled the regions because of the war, and images shared by those who remained showed armed Russian troops going door-to-door to pressure Ukrainians into voting. 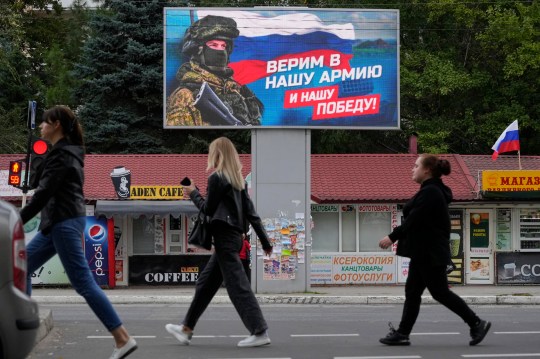 People walk past a billboard displaying a soldier and a Russian flag and reading ‘We believe in our army and our victory’ in Luhansk (Picture: AP) 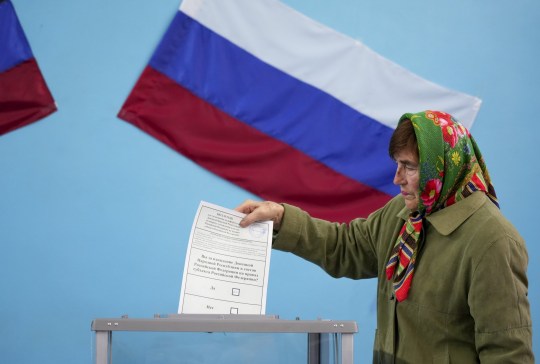 Mariupol Mayor Vadym Boychenko, who left the port city after the Russians seized it after a months-long siege, said only about 20% of the 100,000 estimated remaining residents cast ballots in the Donetsk referendum.

‘A man toting an assault rifle comes to your home and asks you to vote, so what can people do?’ Boychenko asked during a news conference, explaining how people were coerced into voting.

French Foreign Minister Catherine Colonna said while visiting Kyiv on Tuesday that France was determined ‘to support Ukraine and its sovereignty and territorial integrity’ and described the ballots as ‘mock referendums’.

A satellite image shows trucks and cars waiting in traffic jam near the Russian border with Georgia (Picture: AFP via Getty)

Elsewhere, trouble emerged for Putin in the mass call-up he ordered of Russians to active military duty.

The order has triggered an exodus of nearly 200,000 men from Russia, fuelled anti-war protests and sparked violence.

On Monday, a gunman opened fire in an enlistment office in a Siberian city and gravely wounded the local chief military recruitment officer.

Scattered arson attacks had been reported earlier on other enlistment offices.

One destination of fleeing Russian men is Kazakhstan, which reported Tuesday that about 98,000 Russians have crossed into Kazakhstan over the past week.

The European Union’s border and coast guard agency says 66,000 Russian citizens entered the 27-nation bloc from September 19 to 25, a 30% increase over the preceding week.