Twenty-eight days into their journey out of Afghanistan, a woman and her five children are sitting in the shade near a bus station in Tatvan, a town on the shore of Lake Van in eastern Turkey.

She is waiting for a smuggler, who was paid in advance, to take the family to Istanbul. Tired and dirty, the younger children are still playing in the dust and laughing; the youngest boy wants a piggyback. The smuggler is two days late.

“My husband died fighting the Taliban in Ghazni,” she said. “There are fierce battles there now. We used the mountain road [to Iran] and got stopped by Turkish soldiers at the border, but they let us go. We have walked for days … My children are getting sick. It’s a very difficult situation.”

Chaos has quickly engulfed Afghanistan following the withdrawal of US and Nato troops after 20 years fighting against the jihadist movement; the Taliban now claim to be in control of 85% of the country, kindling fears of renewed civil war.

A family from Ghazni who left Afghanistan 28 days ago, wait in Tatvan, eastern Turkey, for a smuggler to take them to Istanbul. Photograph: Ruşen Takva

While it is too early to tell whether the militants’ advance will spark a new exodus of Afghan refugees outside the country’s borders, according to the UN Refugee Agency, since January about 270,000 people have fled their homes and are now internally displaced, bringing the total uprooted population within Afghanistan to more than 3.5 million people.

At least some are already trying to get out. A family of 16 from Herat who left Afghanistan after a relative was assassinated by the Taliban and were then trapped for nearly three weeks at Istanbul’s airport have now been moved to a repatriation centre.

A relative in the US is unable to reach them frequently, as their phones have been confiscated, and it is unclear whether the family’s application for international protection is being processed. The Turkish interior ministry did not respond to requests for more information on the family’s situation.

Larger numbers of people are also making their way overland to Iran, and then Turkey: the Guardian saw at least 1,900 people crossing the border, most of whom appeared to be Afghan, travelling into Van province over two nights this week.

Breaking up into smaller groups of about 30 people, the refugees and migrants from Afghanistan, Iran, Pakistan and Bangladesh waited for a flashlight signal from Yukarıtulgalı village, 800 metres away – a sign the path was free of border guards – before hurrying through the darkness.

Those with enough money will try to reach Europe; others, such as the Ghazni family waiting in Tatvan, aim to find work in Turkey’s cities.

“There is a spike in people crossing from Iran to Van every summer. A lot of the time the Afghans who come are already living undocumented in Pakistan or Iran, but we are watching for a possible new influx thanks to the US troops leaving,” said Mahmut Kaçan, a Van-based lawyer specialising in immigration and asylum cases.

“Afghans end up living in limbo here; they don’t even have basic rights. The UN also stopped resettling Afghans from Turkey to third countries back in 2013, except for extremely vulnerable cases,” he said.

Turkey is the world’s biggest host of refugees and is home to approximately 4 million: the majority are Syrian, at 3.7 million, but Afghans make up the second biggest group. In 2020, 23,000 Afghans applied for international protection in Turkey, according to data available on the directorate general of migration management’s website. 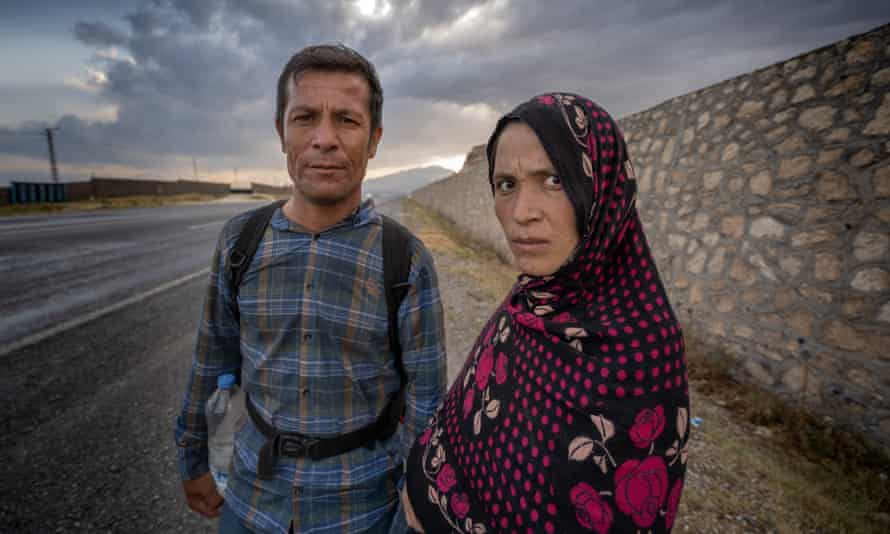 An Afghan couple walk under the summer sun on the the Erciş-Bitlis highway. The woman is pregnant. Photograph: Ruşen Takva

Earlier this week, the Turkish interior ministry spokesperson, İsmail Çataklı, sought to downplay reports of a fresh wave of refugees, saying video and photographs of long lines of people walking in single file along roads in Iran, just 700 metres from the Turkish border, did not mean they would be able to enter Turkey.

Ongoing work to put up security walls, observation towers, floodlights and wireless sensors along Turkey’s borders with Iran and Iraq were 90% complete, he said, adding that “when the project is completed, terrorism, illegal crossing, smuggling, cross-border crimes will be prevented.”

The journey, like many migration routes, is extremely dangerous. As well as border defences and the threat of sexual violence from smugglers and fellow travellers for women, overcrowded and unsafe transport has led to deaths and drownings in Turkey. At least 12 people were killed last week after a smuggler’s minibus overturned on the highway, and 60 people drowned after an unseaworthy boat capsized on Lake Van last month.

On the Tatvan highway, which runs parallel to the shores of the vast salt lake, a group of four young Afghans and one Pakistani came off the road to rest and eat as the midday heat made it too difficult to continue.

They shared some bread, tomatoes and halva between them, faces burnt from days walking in the summer sun.

“The Taliban tried to recruit me,” said one of them, who gave his name as Shorab. “We couldn’t stay. We just want to live in a place where there is no war.”