Nizar Banat knew he was going to die. As he grew bolder calling out corrupt members of Fatah, the party which controls the Palestinian Authority, the death threats mounted. In May, his home near Hebron was attacked by masked gunmen on motorbikes, in an incident which left his children traumatised.

After that, the political activist decided it wasn’t safe to stay home. “He went to his cousin’s house in H2 [an area of Hebron city controlled by the Israeli military] because he hoped Fatah and the PA could not reach him there, but he knew they were coming for him,” said Jihan, Banat’s widow, as she hugged their youngest son in the family’s reception room in the village of Dura. The front of the house is still pockmarked with bullet holes. “He told me: ‘I don’t want to be killed in front of the children.’”

It was early morning on 24 June when Jihan received the news she dreaded. According to his two cousins, who witnessed the abduction, Nizar had been severely beaten but was still alive when he was dragged from the house by 14 men from the Palestinian security forces who were given Israeli permission to enter H2. There was no arrest warrant.

Jihan and three of her children at their home in Dura. Photograph: Bethan McKernan/The Guardian

Twenty minutes later, the vehicle arrived at a nearby hospital – but Banat was already dead. According to an autopsy commissioned by his family, the activist died after suffering 42 injuries inflicted with metal pipes.

Distracted by the latest war in Gaza and a new government, Banat’s killing was barely noticed by Israel or the rest of the world. But for Palestinians, it has proven to be a profound turning point, laying bare both the authority’s complicity in Israeli occupation and the increasingly autocratic lengths Mahmoud Abbas, Fatah’s ageing and deeply unpopular leader, is willing to go to in order to crush dissent.

Representatives for Fatah and the Palestinian Authority did not respond to repeated requests for more information regarding the circumstances surrounding Banat’s death. Nor did they comment on the escalating brutality, including sexual violence, used by official forces and plainclothes Fatah loyalists to suppress protests and strikes which have ignited across the West Bank in the wake of his killing, according to the Palestinian journalists’ union and human rights groups.

“Other people are critics of the PA, but no one was like Nizar. He was articulate: he could join the dots in a way others couldn’t, dismantling the PA’s lies with truth,” said Fadi Quran, a prominent human rights activist who has been arrested several times by both Israeli and Palestinian forces.

“The fact he used to be a member of Fatah himself also made him a threat. He was not just speaking to the opposition, but directly to their base,” he said over coffee at a gathering of activists in a Ramallah cafe.

“He was their biggest weakness,” added Fares Bader, a young man also at the forefront of the new wave of demonstrations against the authority. “The PA wants to deter us and distract us, stop the popular momentum that has been building against it. But instead, killing Nizar has become a catalyst.” 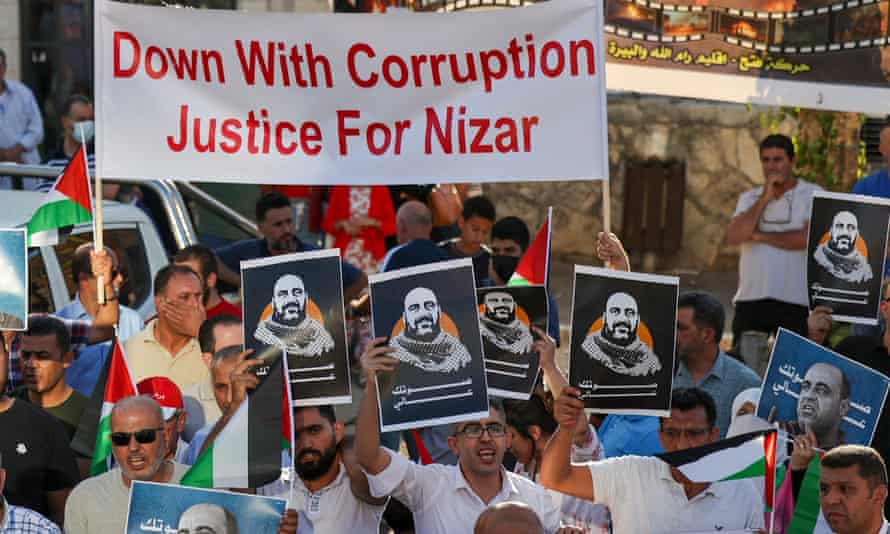 Palestinian protesters rally in Ramallah in July, denouncing the Palestinian Authority in the aftermath of the death of activist Nizar Banat. Photograph: Abbas Momani/AFP/Getty Images

Born to a working-class family, Banat studied at university in Jordan before returning to the West Bank, where he trained as a lawyer and met Jihan, with whom he had five children. He eventually ended up teaching Arabic, while Jihan worked at USAid until she lost her job when the Trump administration slashed funding.

Fiercely intelligent, the 43-year-old Banat was, according to friends and family, a storyteller who for many years was more interested in philosophy than politics, and wrote a book about the history of the Palestinian struggle.

But as the nature of Palestinian politics and governance changed, so did he. The authority was formed in 1994 as part of the Oslo peace accords with Israel as a five-year interim body designed to administer parts of the West Bank and coordinate with Israel on security matters. Its final status was never agreed, however, as talks stalled and the second intifada or uprising erupted. Abbas was elected to a four-year term in 2005 and has remained in charge ever since.

Under his watch a corrupt, repressive and ineffectual ruling class has emerged – one which is increasingly preoccupied by internal power struggles over who will succeed the 85-year-old president. Yet Abbas’ regime still enjoys strong support from Israel and western donors who see the authority as a better option than Hamas, the militant group in control of the Gaza Strip, and fear a power vacuum if the West Bank body collapsed.

“Honestly, it’s got to a point in some ways where my colleagues in Ramallah have more issues than we do,” said one human rights campaigner in Gaza City, who asked not to be named. “Right now people are far more afraid of criticising Fatah than Hamas.”

Banat was not one of them. Furious at an elite he saw as selling out the Palestinian cause for personal gain, over the last few years he gained more than 100,000 followers on Facebook for videos in which he broke down the illegality of the Palestinian establishment’s actions and policies.

The activist was arrested several times under the authority’s draconian cybercrime laws and charged with offences such as treason and incitement. Ever proud and sharp-tongued, in one video Banat declared he would only accept the ruling of a judge who managed to beat his own score of 94% in the bar exam.

Like so many others, at the beginning of 2021 Banat dared to hope for meaningful change when, in an effort to curry favour with the Biden administration, the authority announced the first elections for 15 years. He planned to stand as the head of the newly formed Freedom and Dignity List in the parliamentary poll slated for May.

“Nizar represented the hopes of a whole generation. We knew elections wouldn’t fix everything, but it would be a start at restoring legitimacy in the political system,” said Issa Khatib, another young activist in Ramallah. “Fatah miscalculated though. When they realised they were going to lose to Hamas, they cancelled [the elections]. That’s when everything kicked up a notch.”

Banat’s was the loudest voice lambasting the decision. The attack on his home by unknown gunmen while his children were sleeping came a few nights later, in early May.

“I’ve always been there to help him out. I warned him to tone it down. I have been through the same stuff … targeting your family, death threats,” said Issa Amro, a well-known activist and longtime friend of Banat who lives in H2, the Israeli-administered sector of Hebron. 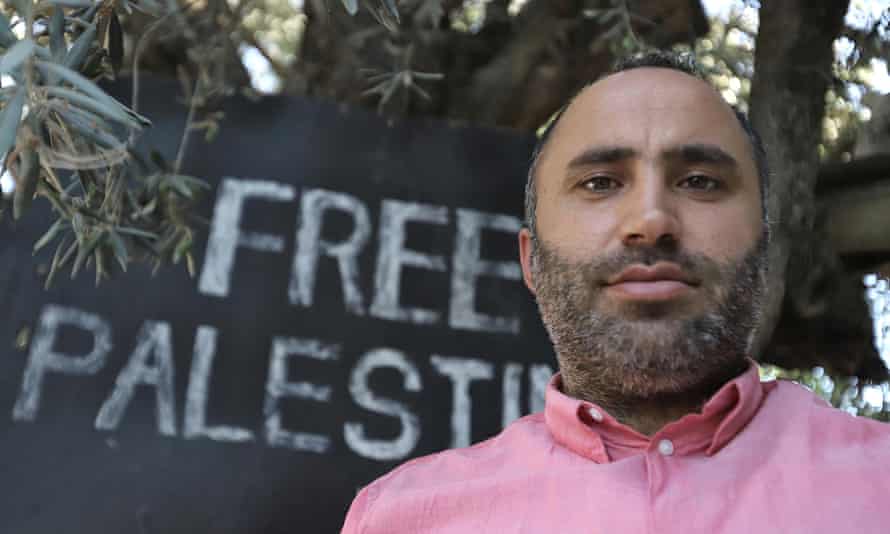 Instead, from hiding, Banat increased the tempo and frequency of his attacks, calling on the EU to impose sanctions on the authority for cancelling the elections and criticising the bungled handling of a Covid-19 vaccination deal with Israel.

“In H2 he should have been safer. But the PA coordinated with Israel so its forces could enter,” Amro said. “His death shows clearly Palestinians have two oppressors: Israel, and the PA. The PA are puppets … an authority without authority. But even that is tricky for us to say out loud, because it means the Israelis can turn around and say ‘Look, we have no real partners for peace.’”

The authority eventually apologised for Banat’s death and promised an internal investigation. Over the last two months, however, peaceful protests in Ramallah calling for an independent inquiry have been met with eye-watering violence from authority officers as well as plainclothes Fatah supporters wielding sticks and iron bars.

Last weekend, about 30 civil society figures – among them the activist Fadi Quran, trade unionists, former political prisoners, journalists, poets and professors – were arrested. Some were charged with taking part in an illegal gathering, despite the fact that organisers must give notice of any planned demonstrations in advance. Detainees spoke of overcrowded, unsanitary and humiliating conditions.

“Being shot at, arrested and beaten by Israelis doesn’t hurt as much as being attacked by your own people,” said a lawyer who was allegedly sexually assaulted by six Ramallah policemen as she was arrested during a protest in July and did not want her name published. At the station, she said she had to stop officers from trying to take young women away from the main holding cell.

“They psych up the men before they set them loose on us, tell them we are whores, steal photos from our phones. Everyone is a target, but they want to make women too afraid to even come outside.”

Public anger with the authority’s many failures is mounting. But rather than acknowledge any wrongdoing, the authority and Fatah appear to be doubling down on the familiar tactics of repression and intimidation.

In some respects, the authority has never been weaker, which gives its opponents hope – but it comes at a cost, Quran said.

“It’s a high price Nizar paid. More of us will have to pay it in the future,” he said. “We are prepared for that.”