A camp where migrants had been gathering near to the Texan border has been cleared (Picture: Reuters)

Thousands of migrants who had gathered at a makeshift camp on the US-Mexico border have been moved on.

All of the tents and shelters that had been hastily erected on the banks of the Rio Grande have disappeared and witnesses say only stragglers remain on the site.

Up to 15,000 migrants – many of them Haitians – had converged on the border crossing between Del Rio, Texas, and Ciudad Acuna, Mexico, over the last week – hopeful of starting a new life in the US.

They were spurred on by confusion over the Biden administration’s policies and misinformation on social media.

By Friday, Val Verde County Judge Lewis Owens, who has been keeping tabs on the number of people in the camp, said it had been cleared.

The Biden administration has come under heavy criticism for its use of expulsion flights to fly at least 2,000 people back to Haiti, a country that has recently been traumatised by a destructive earthquake and the assassination of its president.

A US official with direct knowledge of the situation said seven flights were scheduled to Haiti on Friday, six on Saturday and seven on Sunday.

The Trump administration enacted the policy in March 2020 to justify restrictive immigration policies in an effort to prevent the spread of the coronavirus. The Biden administration has used it to justify the deportation of Haitian migrants. 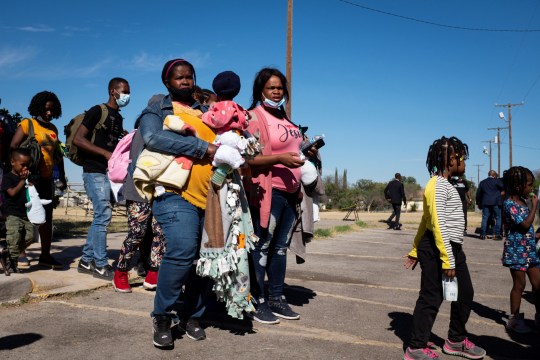 Migrants had gathered in Del Rio, Texas amid confusion about the US’ border policies (Picture: Reuters) 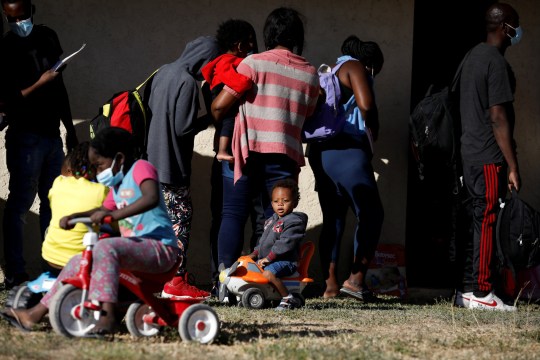 Many of the migrants have been allowed into Texas to await news of their immigration applications (Picture: Reuters)

Mexico has also sought to bus and fly Haitians to its southern states, far from the border with the US.

Thousands more migrants are in US detention centers and several hundred have been released in Texas and will have a chance to make their case for protection before an immigration judge.

Luxon, 31, a Haitian migrant who withheld his last name out of fear, said he was leaving with his wife and son for Mexicali, about 900 miles west along Mexico’s border with California.

‘The option was to go to a place where there aren’t a lot of people and there request documents to be legal in Mexico,’ he said. 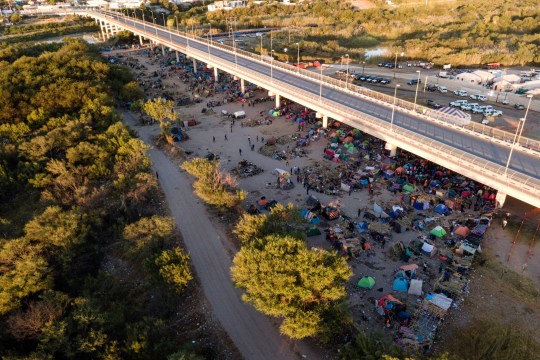 Around 15,000 migrants had gathered at the camp (Picture: AP) 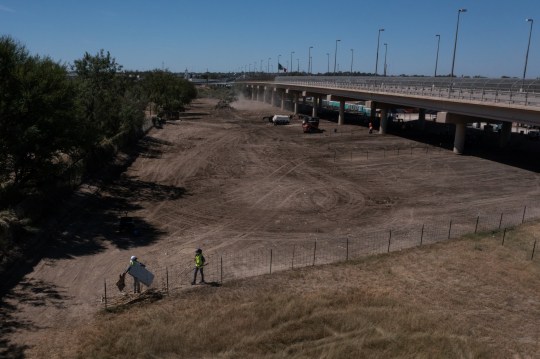 It comes after the Biden administration’s special envoy to Haiti, Daniel Foote, submitted a letter of resignation on Thursday protesting the ‘inhumane’ large-scale expulsions of Haitian migrants.

Foote, who was appointed in July, wrote to Secretary of State Antony Blinken, saying he was stepping down immediately ‘with deep disappointment and apologies to those seeking crucial changes.’

‘I will not be associated with the United States inhumane, counterproductive decision to deport thousands of Haitian refugees and illegal immigrants to Haiti, a country where American officials are confined to secure compounds because of the danger posed by armed gangs to daily life,’ he wrote.

‘Our policy approach to Haiti remains deeply flawed, and my policy recommendations have been ignored and dismissed, when not edited to project a narrative different from my own.’

Officials have requested that Brazil and Chile receive some of the Haitians from the camp.

Many of the those arriving at the US border had previously lived in Brazil and Chile, while others have transited through the South American countries.