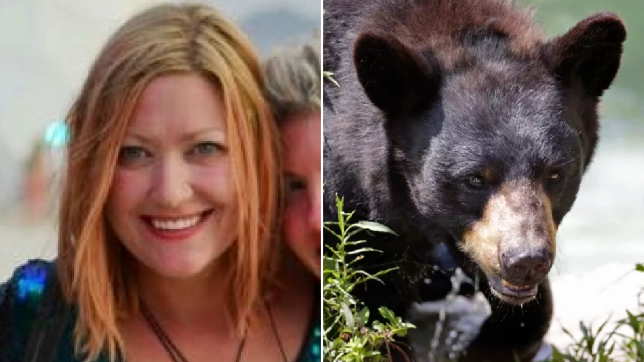 Shannon Stevens, left, was nipped in the backside by a bear after she sat down in an Alaskan out house (Pictures: Faceook/AP – file)

A bear bit a woman’s backside after she sat down on an outdoor toilet in Alaska. Shannon Stevens, 38, was nipped by the wild animal after going to the outhouse to relieve herself in Haines, Alaska, on February 13.

Shannon said: ‘I got out there and sat down on the toilet and immediately something bit my butt right as I sat down. I jumped up and I screamed when it happened.’ The sound of Shannon’s screams alerted her brother Erik, who came to see what was wrong.

She hadn’t seen the animal which attacked her, and believed it to be a smaller woodland creature, such as a mink or a squirrel. But Erik, who owns a nearby yurt, got a huge shock after he lifted the toilet seat and saw which animal was actually behind the nip, KHNS reported.

Erik, 34, said: ‘I opened the toilet seat and there’s just a bear face just right there at the level of the toilet seat, just looking right back up through the hole, right at me. I just shut the lid as fast as I could. I said, “There’s a bear down there, we got to get out of here now.” And we ran back to the yurt as fast as we could.’ 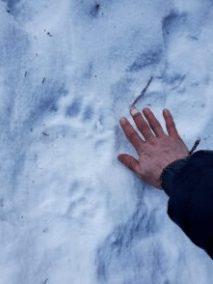 Shannon’s brother Erik later took a photo of his hand next to a paw print believed to have been left by the same bear (Picture: KHNS)

Once Shannon, Erik and Erik’s girlfriend got to safety, they used a first aid kit to treat Shannon’s wound. She said: ‘It was bleeding, but it wasn’t super bad.’

The group continued their vacation – and found bear tracks all around their property the next morning.

Shannon thinks the bear got into the outhouse through an opening on its back door.

She added: ‘I expect it’s probably not that bad of a little den in winter.’

Biologist Carl Koch, from the Alaska Department of Fish and Wildlife, suspects the animal was a black bear seen by another neighbor days before the attack on Shannon.

That neighbor said the bear seemed to be in ‘sleeping hibernation’ mode. Koch said low salmon and berry supplies over the summer meant the bear may have not been able to fatten up enough to hibernate all winter.

He said the type of attack Shannon endured was extremely rare: ‘As far as getting swatted on the butt when you’re sitting down in winter, she could be the only person on Earth that this has ever happened to, for all I know.’

Koch also speculated that Shannon may have been swiped by the bear’s clawed paw, rather than bitten by its teeth.

Shannon says she plans to be more cautious in the future, and joked: ‘I’m just going to be better about looking inside the toilet before sitting down, for sure.’