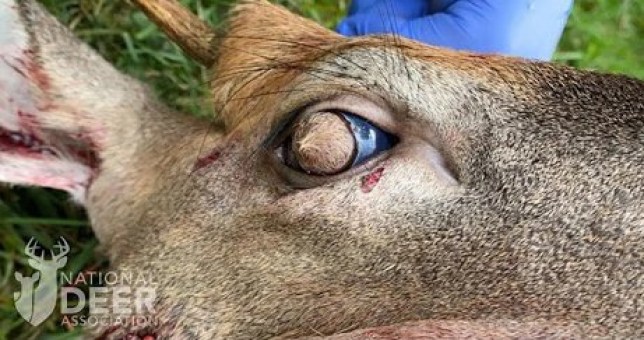 The deer, found in the US, had a condition called corneal dermoids (National Deer Association)

A deer in Tennessee was found stumbling through the streets with thick hair growing on both of its eyeballs.

The deer had developed a condition called corneal dermoids, wherein a benign tumour caused skin tissue to grow on the cornea – the transparent part of the eye that covers the iris and pupil.

In this case, the skin tissue produced hair follicles to grow on top of the cornea.

According to Quality Whitetails magazine, this has only ever been documented in one other case.

Sterling Daniels, a wildlife biologist at the Tennessee Wildlife Resources Agency (TWRA), told the magazine the affected deer could maybe ‘tell day from dark, but I wouldn’t think it would be able to see where it was going.’

‘I’d compare it to covering your eyes with a washcloth. You could tell day from night, but that’s about it.’

The deer also tested positive for epizootic hemorrhagic disease (EHD), which is incurable and causes the deer to suffer fever, tissue swelling and loss of fear of humans. Which is why the experts say it was wondering disorientated through a residential neighbourhood in Knoxville.

The illness doesn’t explain why it had hair on its eyeballs but the expert’s suggestion is that it had lived with the corneal dermoids since birth.

Dr. Nicole Nemeth, an associate professor in the Department of Pathology at the Southeastern Cooperative Wildlife Disease Study unit (SCWDS) of the University of Georgia vet school, said it likely started in the womb and developed slowly.

‘We assume these to be congenital (existing at birth), so we surmised that it survived a long time with those,’ she told Quarterly Whitetails.

‘Again, assumptions, but we also assumed the dermoids developed gradually and that the deer was able to adapt to its decreasing field of vision over time. How fast they develop over time probably isn’t well known and may vary case to case.’