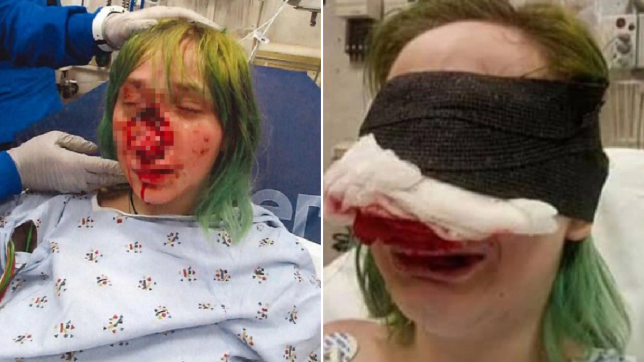 Elise Poole’s nose was ripped off her face after she was struck by a police projectile at a George Floyd protest, a newly-filed lawsuit claims (Pictures: ACLU)

A George Floyd protester is suing after her nose was severed from her face when she was shot by police while attending a Black Lives Matter protest. Elise Poole, from Lincoln in Nebraska, required emergency surgery to reattach her nose after it was ripped off while Poole protested last May.

She has now sued over claims Lincoln Police used ‘indiscriminate and excessive force’ against her and other demonstrators.The lawsuit, filed on behalf of Poole by the American Civil Liberties Union, says Poole was struck by ‘an impact munition, severing her noise from her face.’

Poole’s filing includes horrific photos of her blood-soaked nose, and a photograph of half her face bandaged and packed with gauze after she was treated for her injury.

It continued: ‘The traumatic injury required emergency reconstructive surgery.’ ACLU lawyers added that Poole and her friends ‘were gathered in peaceful protest and not posing any safety threat.’ 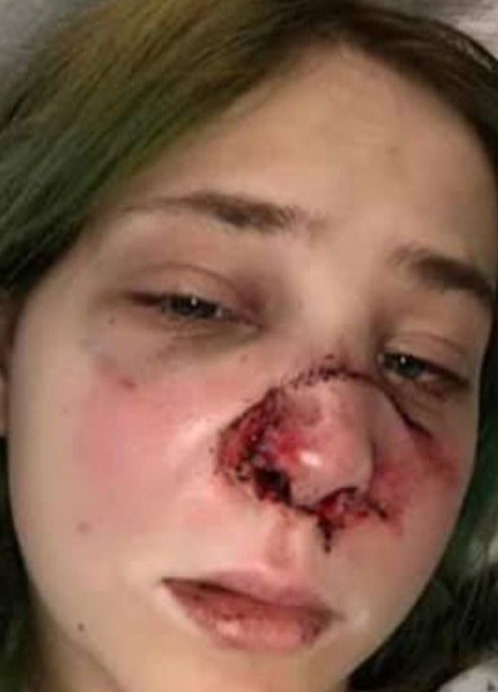 She was struck and injured on May 31 last year, six days after Floyd’s killing by Minneapolis Police office Derek Chauvin. The ACLU suit says officers used pepper balls and tear gas before firing the projectile which injured Poole.

Adam Sipple, from the ACLU’s Nebraska Legal Division, told WOWT: ‘Officers traumatized Elise and every other peaceful protester at that scene in an outrageous violation of their rights.

‘It was never justified, and it was never acceptable. We brought this lawsuit because we share Elise’s conviction that we need to make sure this never happens again.

‘There’s no way for this community to move forward toward justice without accountability.’

Floyd’s killing triggered a wave of outrage and protests across the world. The 46 security guard was filmed crying ‘I can’t breathe’ as Chauvin knelt on his neck for eight minutes and 46 seconds.

Chauvin is set to be tried for Floyd’s murder in March.