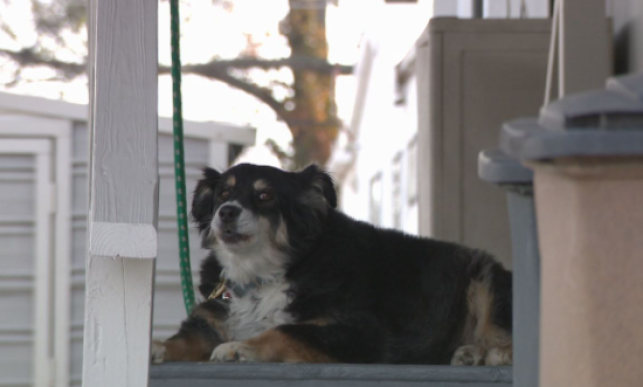 Lulu the border collie has become one of the richest pets in America after her late owner left her $5million in his will (Picture: NewsChannel5)

A border collie called Lulu is now worth $5million after her wealthy owner died and left her his fortune. The eight year-old pet, who lives in Nashville, Tennessee, got her paws on the enormous sum after her businessman owner Bill Dorris died aged 84 last November.

Dorris’s will said: ‘$5,000,000 will be transferred to a trust to be formed upon my death for the care of my border collie Lulu. This trust is to provide for all the needs of Lulu. The dog will remain in possession of Martha Burton.’

Lulu now lives with her caretaker, 88 year-old Margaret Burton, an old friend of Dorris’s who cared for Lulu while her owner was working. Commenting on the huge windfall left to Lulu, Burton said: ‘I don’t really know what to think about it to tell you the truth. He just really loved the dog.’

Dorris’s will is in probate, and it is unclear how much Lulu will be left with when his final bills and taxes are paid. But locals say the late businessman – known locally for displaying a Confederate-era statue critics called racist – was an extremely wealthy man. They expect the final sum left to Lulu to be a sizable one.

Margaret files a monthly claim for Lulu’s expenses to a conservator who approves the receipts, before reimbursing them. And despite the dog’s wealth, Margaret says she has no plans to splash out on a diamond-encrusted collar or gold bowl for Lulu.

She told NewsChannel5 there was no way she could ever spend the vast sum on the collie, then joked: ‘Well, I’d like to try.’

It is unclear what will happen to any money left over when Lulu passes away.

The biggest inheritance ever believed to have been left to a pet was $80 million bequeathed to a German shepherd called Gunther III in 1992.

Gunther is said to have been left the sum by a German heiress called Countess Karlotta Leibenstein, although some skeptics claim the will was fake.

The biggest confirmed amount left to an animal was the $15million book publisher Miles Blackwell gave to his chicken Gigoo after his death in 2002.