Human remains found in the Carlton Reserve in Florida have been identified as those of Brian Laundrie, the sole person of interest in his fiancé Gabby Petito’s death, according to the FBI.

The news on Thursday night came a day after partial remains were found near a backpack and notebook belonging to Laundrie. Dental records were used to confirm his identity, the FBI said.

‘On October 21, 2021, a comparison of dental records confirmed that the human remains found at the T Mabry Carlton Jr Memorial Reserve and Myakkahatchee Creed Environmental Park are those of Brian Laundrie,’ the FBI said in a statement.

Steven Bertolino, the Laundrie family’s attorney, confirmed his parents were notified of the identification.

‘Chris and Roberta Laundrie have been informed that the remains found yesterday in the reserve are indeed Brian’s’, Bertolino said. ‘We have no further comment at this time and we ask that you respect the Laundrie’s privacy at this time.’

Rick Safford, the attorney for Gabby’s family, said they would not make any statements on the identification of Laundrie until they are ‘emotionally ready.’

Still image from a police bodycam released by the Moab City Police Department in Utah, shows Brian Laundrie (L) speaking with police as they responded to an altercation between Laundrie and Gabby Petito (Picture: AFP)

Laundrie’s remains were found on Wednesday, a month and a day after Gabby was discovered dead in a remote section of a Wyoming national forest. A Teton County coroner ruled she died by strangulation, in the manner of homicide.

Laundrie’s parents arrived at Myakkahatchee on Wednesday morning, where an officer told them they ‘might have something’.

It was later confirmed ‘some articles belonging to Brian were found’, Bertolino said.

The Sarasota County Medical Examiner was later called to the Carlton Reserve area. Myakkahatchee park only reopened Tuesday to the public after being closed off for nearly a month while the FBI led the massive manhunt for Laundrie. 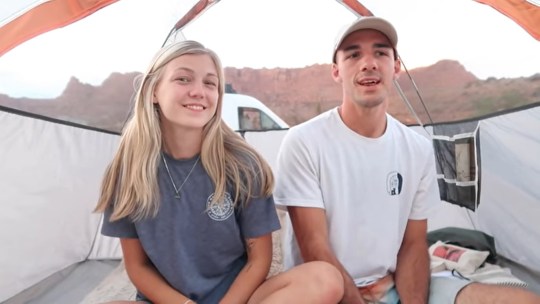 In their first public comments since their daughter Gabby’s death, the Petito family declined to comment on Brian Laundrie, who returned home from a cross country road trip without Petito. He is the only person of interest in her homicide (Picture: Nomadic Statik/YouTube)

The Pasco County Sheriff’s Office confirmed that a cadaver dog was on the scene, as well as two spotters.

The couple left New York for what was supposed to be a four-month, cross-country trip visiting and camping in national parks. They planned to sleep in their van and document their travels on Instagram and YouTube as part of ‘van-life’ blogs. 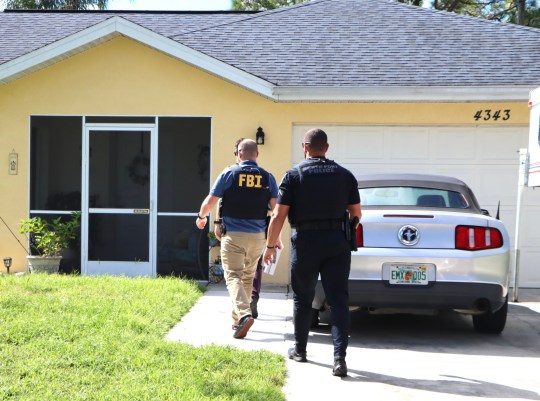 Two FBI officers arrived at the Laundrie home to drop off some paperwork amid the search for Brian Laundrie (Picture: SplashNews.com)

Except Laundrie returned to his parents’ North Port, Florida, home without Gabby. He returned on September 1, 10 days before her parents grew concerned about her whereabouts and reported her missing.

Her body was found on September 19 at a campground in Bridger Teton National Forest, and it was confirmed she died by homicide two days later.

Gabby’s body was left in the wilderness for three to four weeks, Teton County Coroner Dr Brent Blue said while sharing the autopsy report on October 12.

The couple were childhood sweethearts in Long Island before moving from Blue Point, New York, in 2019 to live with Laundrie’s parents in North Port. 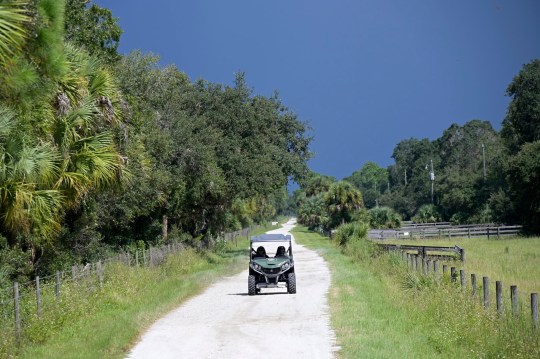 Florida Fish and Wildlife Commission officers ride up a private road near the entrance of the Carlton Reserve during a search for Brian Laundrie (Picture: AP)

The FBI issued an arrest warrant for Laundrie and a federal jury in Wyoming indicted Laundrie for alleged bank fraud. It’s suspected he used Petito’s debit card on August 30 and September 1, presumably as he drove home to Florida in Petito’s van.

Investigators searched for Laundrie on the Venice side of the Carlton Reserve, a swampy and hard-to-navigate 25,000-acre nature reserve near the family’s home.

The search also included an underwater dive team from the Sarasota Sheriff’s Office.

After days of searching, television personality Duane Lee Chapman, better known as Dog the Bounty Hunter, joined the manhunt for Laundrie, stirring up headlines as he received tips regarding Laundrie’s whereabouts.

As the search intensified, Gabby’s family began speaking out and begged the Laundrie family to come forward with information regarding what happened to her.

In an interview with Dr Phil, Gabby’s father Joe Petito called the entire Laundrie family cowards, saying that they ‘don’t know how to stand up for their actions’.

Her parents detailed how they tried texting and calling Chris and Roberta when Gabby first went missing out of concern, but never heard a word from the family.

‘A normal parent when you text someone that (you) are going to call the cops because you can’t find your child, they would reply,’ Joe said. ‘No response. Nothing.’

Gabby’s mother, Nichole Schmidt, said part of her knew then that her daughter was gone.

The family later announced the creation of the Gabby Petito Foundation, a network that will help locate missing persons and assist victims of domestic violence.