A Russian court on Monday scheduled Women’s National Basketball Association star Brittney Griner’s trial to start Friday, and ruled her detention will be extended six months, according to her lawyer.

More than four months after she was arrested at a Moscow airport for alleged cannabis possession, Griner, 31, made a brief appearance Monday for a preliminary hearing in the Moscow suburb of Khimki.

In an interview with CNN, Griner’s attorney, Alexander Boikov, confirmed the trial would begin Friday, and shared that the court ruled that Griner’s detention would be extended for six months pending her trial.

The Phoenix Mercury star will remain in custody for the duration of her trial. She could face 10 years in prison if convicted on charges of large-scale transportation of drugs. 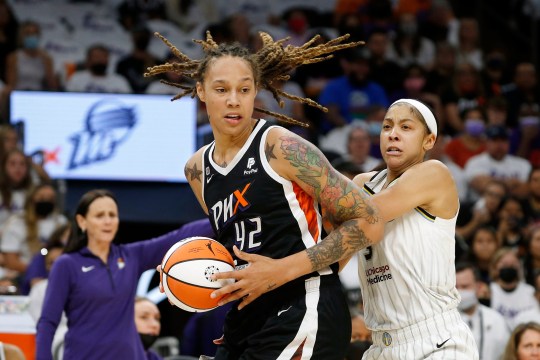 Griner has been detained in Russia since February (Picture: AP)

Griner was seen wearing a grey T-shirt and glasses on Monday as she was being escorted in and out of the Russian courthouse.

Griner, who was detained in February, will remain in Russian custody through July 2 at the least, the Russian state media outlet TASS first reported.

The basketball star was detained at Sheremetyevo International Airport, near Moscow, in February after authorities found vape cartridges containing oil from cannabis in her bag.

Last month, the Biden administration declared that the basketball star had been ‘wrongfully detained by the Russian government.’ The aggressive verbiage signifies the US government’s commitment to secure her release as the legal case against her plays out. 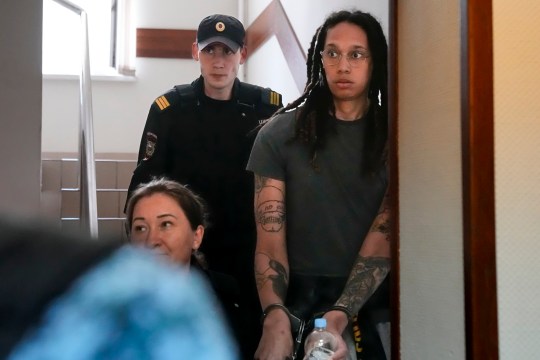 The US State Department’s move on Griner’s case came after the release of Marine veteran Trevor Reed, who returned to the US from Russia as part of a prisoner swap.

She reportedly has not been able to speak with her wife since February, when she was first detained in Russia.

‘I’ve got no higher priority than making sure that Americans who are being illegally detained in one way or another around the world come home,’ Blinken said during an interview with CNN.

‘That includes Paul Whelan, that includes Brittney Griner, that includes people in a number of other countries,’ he added. Whelan was detained in Moscow in 2018 and arrested on espionage charges, which he has denied.

‘I can’t comment in any detail on what we’re doing, except to say this is an absolute priority,’ Blinken said.