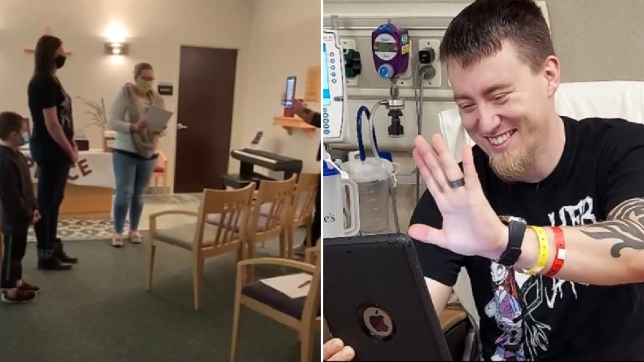 Justin Armstrong married wife Stephanie while they were in separate rooms after he tested positive for Covid the day before their planned nuptials (Pictures: KMBC)

A couple got married while in separate rooms over FaceTime after the groom tested positive for Covid. Justin and Stephanie Armstrong improvised after they were forced to cancel their big day last month.

The lovebirds’ plans were thrown into complete disarray when Justin, from Kansas City in Missouri, tested positive for the virus the day before their nuptials. Justin was taken to St Luke’s Hospital in Kansas City after his symptoms began to worsen.

He said: ‘It was heartbreaking.’ But Stephanie was still hopeful they could wed, and asked Justin if he was up for it. He agreed, with doctors and nurses at St Luke’s also supportive of the couple’s unusual wedding plan.

Stephanie went to the hospital’s chapel, while Justin stayed in his room, with a family friend officiating the couple’s vows via video link. The couple checked with an attorney beforehand to ensure the wedding was still legal, and were thrilled on being told that it was.

Stephanie told KMBC: ‘The point of the day is to be married to the person you love and that’s what we did.

‘It ended up being one million times better than I thought it would be.’

Justin added: ‘I love Stephanie and it just it just felt like the right time.

‘All this bad stuff just felt like it was just raining down and I wanted something really good to come out of it.’ 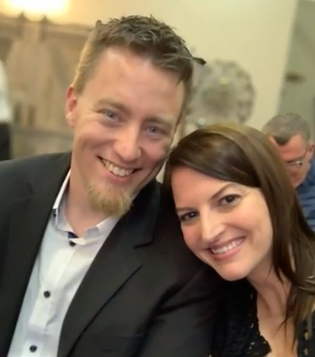 Justin and Stephanie plan to say their vows in person and hold a party for loved-ones when social distancing guidelines are eased (Pictures: KMBC)

The newlywed is recovering well from his Covid infection, and hopes to be discharged from hospital on Wednesday.

He and Stephanie plan to repeat their vows in person, and hold a party for loved ones when social distancing rules are eventually relaxed.