Covid: Anti-vaxxer asks for prayers after contracting the virus

Laura Loomer is a far-right activist who briefly won the support of Donald Trump (Picture: Getty)

A far-right conspiracy theorist who urged supporters not to get vaccinated has revealed she is ‘in pain’ after contracting Covid-19.

Laura Loomer, who has spent the pandemic claiming the vaccine was a ploy by the government to control people, asked supporters to pray for her.

The Florida-based activist confirmed she had contracted the virus to her 32,000 Telegram followers on Thursday.

She has previously attempted to run for election as a Republican and has been banned from platforms like Uber and Twitter for her extreme views.

She wrote: ‘Yesterday, I was feeling ill. I had a fever, chills, a runny nose, sore throat, nausea and severe body aches that made my whole body feel like I got hit by a bus, and after sleeping for a few hours, my symptoms started to remind me how I felt when I had a bad case of the flu years ago.’

In a follow up post, she said: ‘Just pray for me please. Can’t even begin to explain how brutal the body aches and nausea that come with COVID are. I am in so much pain.’

In 2020, Loomer posted on a fringe social media platform Parler: ‘I hope I get COVID just so I can prove to people I’ve had bouts of food poisoning that are more serious and life threatening than a hyped up virus.’ 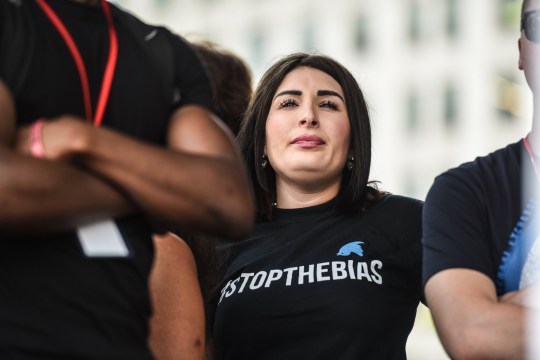 She told followers getting the virus was no worse than food poisoning and has claimed the vaccine is a government control tool (Picture: Getty) 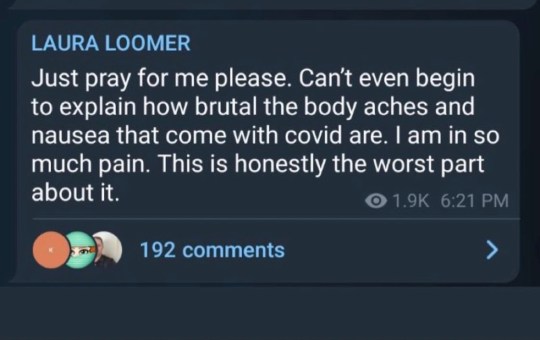 Despite admitting she is suffering severe symptoms, she is still telling followers not to get vaccinated (Picture: Laura Loomer/Parler)

‘Have you ever eaten bad fajitas? That will kill you faster than COVID.’

Despite her suffering, she has since repeatedly pedaled unfounded claims that the vaccine is not safe and said she would not take it.

She told followers: ‘These Covid vaccines are poison to your body and a control mechanism for the federal government to track and surveil you.’

Ms Loomer also told followers she was taking ivermectin, a drug which is used to treat horses for worms but has been cleared for use to treat parasites in humans in small doses.

There is no scientific evidence that the product, which has been linked to a spike in patients arriving at US hospitals with symptoms of poisoning, is an effective treatment for Covid-19.

The anti-vax movement has failed to win popular support around the world, including in the UK, but continues to turn out small but determined crowds.

On Saturday, a crowd of a few thousand descended on Whitehall and covered Downing Street in red paint while calling for Boris Johnson to be arrested.

This week, chief medical office Chris Whitty said people who are ‘peddling untruths’ about life-saving vaccines should be ‘ashamed’.