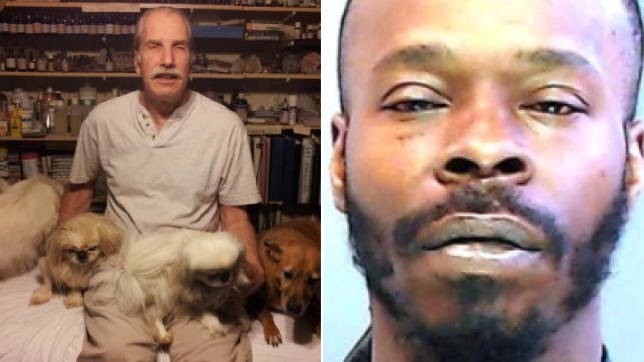 Deep fried human hands and feet have been discovered after a sex offender was caught fleeing the burgled home of a missing 70 year-old masseuse. The defiled remains were found in bags behind a strip mall in Philadelphia on Saturday while detectives investigated the disappearance of Peter Gerold, who was reported missing last Wednesday.

Investigators said the hands and feet are believed to belong to a man, and also discovered a pair of legs which had not been deep-fried. They were found after cops pulled over a U-Haul truck spotted fleeing Gerold’s house last Thursday, the day after police performed a welfare check on the property.

The truck’s driver, who has not been named, said: ‘I don’t want anything to do with this, and there’s a body in the back,’ after getting out, it is claimed. A search of the vehicle found other dismembered body parts in a trash bag.

The truck’s passenger, registered sex offender Taylor Herring, 47, is said to have tipped police off about the deep-fried body parts during a subsequent interview. Forensic analysis is ongoing to try and determine who the remains belong to.

Police told The Philadelphia Inquirer that it is too early to say if the body parts are connected to the burglary of Gerold’s home, or his disappearance.

Officers were sent to check on the masseuse’s home the day before, but did not force entry to the property, because nothing seemed amiss.

Herring has so-far been charged with burglary, abuse of a corpse and evidence tampering.

He is being held without bail while the investigation continues. Detectives said the call appealing for a welfare check on Gerold came from someone who knew the masseuse who lived out of state, but did not elaborate further.

Gerold’s next door neighbor Tiffany McLean told of her shock at the horrific turn the missing person’s investigation has taken.

Speaking to ABC6, she said: ‘He was always willing to help people no matter what; it’s so sad.

‘It sounds like something out of a movie or something. I can’t really, I’m still trying to process it myself.’