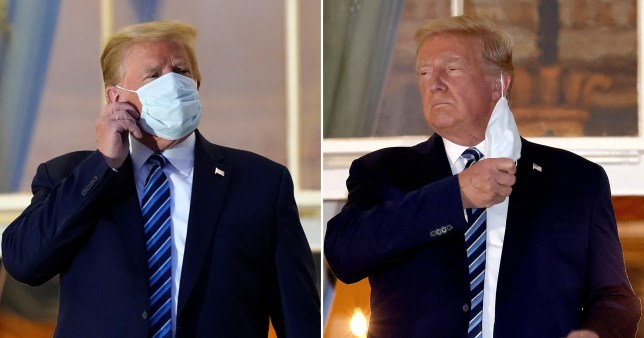 Donald Trump was far more seriously-ill with Covid than he let on, and almost ended up on a ventilator, it has been claimed (Pictures: AP/Reuters)

Donald Trump lied about how bad his Covid infection was – and was so sick he almost ended up on a ventilator, it is claimed. The former President of the United States suffered worryingly low blood oxygen levels that indicated he was battling a severe Covid infection.

Trump, who tested positive for Covid in early October 2020, also suffered inflamed lungs that doctors believed were filled with fluid or bacteria. He is said to have shown symptoms of pneumonia, and came close to being put on a ventilator, sources told The New York Times.

Up to four fifths of Covid patients who end up on the mechanical breathing machines end up dead, doctors say. The alleged severity of Trump’s illness emerged despite the president playing down how sick he was.

Trump, who is 74 and overweight, was flown from the White House to Walter Reed Medical Center in Bethesda, Maryland, on Friday October 2. The next day, Trump’s physician Dr Sean Conley painted a rosy picture of the president’s condition, saying there was ‘nothing of any major concern.’ 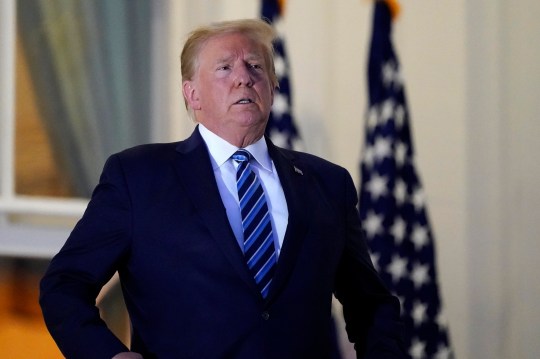 President Trump was filmed breathing with his neck muscles on returning to the White House three days after his Covid test, with doctors speculating that his lungs had been badly damaged (Picture: AFP)

He made comments about Trump’s oxygen levels which have since been disputed. The then-president was prescribed dexamathasone, a steroid only given to seriously ill Covid patients.

He eventually recovered after being given a then-experimental antibody treatment made by pharmaceutical company Regeneron.

The drug was not available to the general public at the time, sparking questions about what would have happened to Trump if he hadn’t received it.

Trump returned to the White House three days after being admitted to hospital, and was filmed whipping off his mask and straining his neck muscles to breathe.

Footage of the president’s apparently labored breathing sparked concern, with doctors saying he appeared to be suffering from lung issues.

A source close to Trump denied the former president lied about the severity of his Covid infection.

Trump was accused of mishandling Covid by playing it down and encouraging lockdowns to end too early.

The United States has now recorded close to 27.4 million Covid cases, and over 475,000 deaths.