Texts made public Monday show a stream of frantic texts sent to former White House Chief of Staff Mark Meadows during the attack on the US Capitol on January 6 (Pictures: AP / AFP)

But on January 6, Trump wasn’t listening to his children or his biggest media supporters, it was revealed during a hearing by the House select committee investigating the insurrection.

The texts were made public Monday just before the committee voted 9-0 in favor of recommending that Meadows be charged with contempt of Congress. The full, Democratic-led House could vote as soon as Tuesday to approve the resolution. 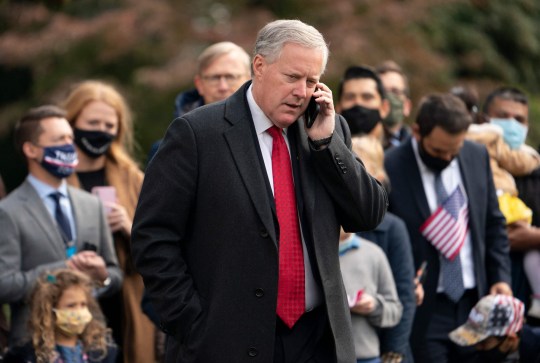 Trump’s former top aide Mark Meadows had been cooperating with the investigation into the attack, but after turning over about 9,000 documents decided he would no longer cooperate (Picture: Getty Images)

Meadows has been called repeatedly to appear for depositions before the Democratic-led committee and has declined to do so despite being subpoenaed. He had turned over about 9,000 documents, including the texts, before he stopped cooperating with the investigation.

The day of the insurrection, Laura Ingraham, the host of the nighttime show The Ingraham Angle, texted Meadows telling him to urge the president to take action.

‘Mark, the president needs to tell people in the Capitol to go home,’ she wrote. ‘This is hurting all of us. He is destroying his legacy.’ 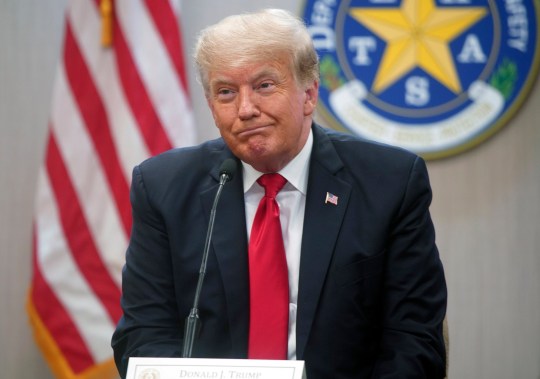 Then-president Donald Trump urged his supporters to march on the Capitol in an attempt to stop the certification of the 2020 presidential election (Picture: AP)

Brian Kilmeade, a host of the network’s morning show Fox & Friends, echoed those concerns in a separate message to Meadows: ‘Please, get him on TV. Destroying everything you have accomplished.’

Longtime host Sean Hannity texted: ‘Can he make a statement? Ask people to leave the Capitol.’

Despite the frantic texts to Meadows, Fox News hosts did not outwardly condemn the riots while reporting the day-of.

In the hours after the attack, Ingraham promoted the false theory that members of Antifa were involved in the riot. 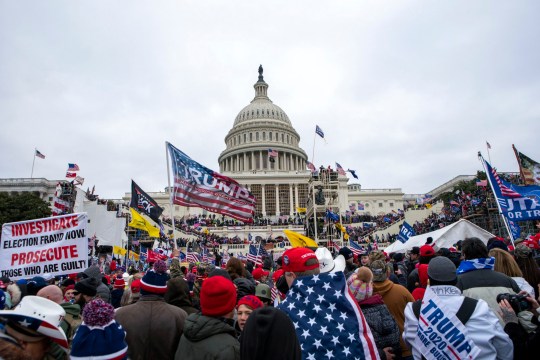 ‘From a chaotic Washington tonight, earlier today the Capitol was under siege by people who can only be described as antithetical to the MAGA movement,’ Ingraham said during a January 6 episode, according to the The New York Times.

‘Now, they were likely not all Trump supporters, and there are some reports that Antifa sympathizers may have been sprinkled throughout the crowd.’

Both Ingraham and Hannity cited concerns over how the election was conducted, but said dissatisfaction with the vote should not have resulted in violence.

In the year since the attack, Fox News hosts have often downplayed the events of January 6, with some trying to compare it to the widespread protests against racism and police violence that followed the death of George Floyd in May 2020.

When asked about the committee’s decision to recommend he be charged with contempt, Meadows told Fox News hosts the move was ‘disappointing but not surprising’.

‘This is about Donald Trump and about actually going after him once again,’ Meadows said.

Cheney also read aloud texts sent to Meadows on January 6 from members of Congress and others in the Capitol.

‘Hey, Mark, protestors are literally storming the Capitol,’ read one text. ‘Breaking windows on doors. Rushing in. Is Trump going to say something?’

Committee members also said they want to question Meadows about his text messages from unnamed members of Congress, in which they discuss ways to avoiding certifying the election result.

The documents also included an email Meadows sent to an unidentified person that said the National Guard would be present to ‘protect pro Trump people’ and that more would be on standby.

Meadows could become the third associate of the former president to face a criminal contempt of Congress charge.

Trump, at a rally on January 6, repeated his false claim that his loss to Democratic President Joe Biden in the November 2020 election was the result of widespread fraud, and urged his supporters to march on the Capitol.

Four people died on the day of the riot, and one Capitol police officer died the next day of injuries sustained while defending Congress. Hundreds of police were injured during the multi-hour onslaught by Trump supporters hoping to stop formal certification of his election defeat, and four officers have since taken their own lives.