The fourth grader’s death was the first fatality related to the plague in Colorado since 2015 (Picture: PA)

A 10-year-old girl died of the plague this month in Colorado’s first fatality linked to the insect-borne disease since 2015. Her death comes as the Colorado Department of Health confirmed cases in six counties statewide.

The identity of the girl, a fourth grader at Sunnyside Elementary School in Durango, La Plata County, has not been disclosed. She died on July 5.

‘Medical and health professionals are trying to track down where she contracted the disease,’ Angela Fountain of La Plata County CSU Extension wrote in an email obtained by The Durango Herald. ‘At this time, that is still unknown.’

La Plata County coroner Jann Smith confirmed that the girl had a suspected case of the plague. 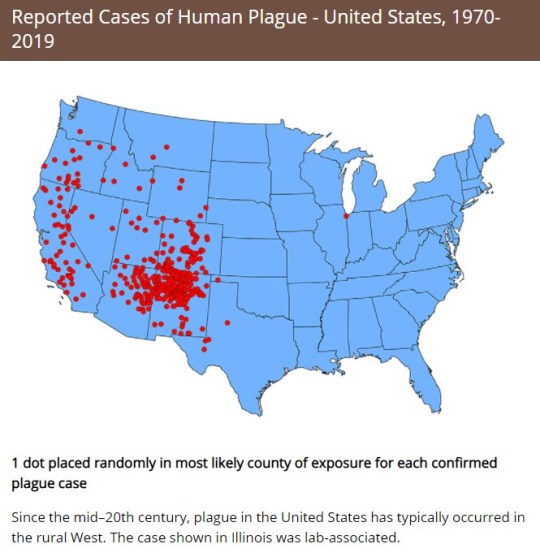 Most of the US’s plague cases have been found in the southwest (Picture: Centers for Disease Control and Prevention)

The Colorado Department of Public Health and Environment launched an epidemiological investigation on the case.

‘We are so sad for the loss of this young Coloradan and our deepest condolences go to the family,’ said Dr Jennifer House of the health department.

House added that the department ‘wants Coloradans to know that while this disease is very rare, it does occur sometimes, and to seek medical care if you have symptoms’.

The plague is contracted by bacteria that can be transmitted to humans mainly through fleas, or from direct contact with infected animals. Symptoms include fever, chills, headache, feeling weak and painful, swollen and tender lymph nodes, according to the Centers for Disease Control and Prevention.

Colorado has reported 22 plague cases from 2005 to 2020, with nine in La Plata County. Four people died of the plague in 2015 in the US, including two from Colorado.

The plague has been confirmed in the Colorado counties of La Plata, Adams, Boulder, El Paso, Huerfano and San Miguel, according to the Daily Mail.

Between 2005 and 2021, 568 animals including 104 cats and dogs were found to have the plague in Colorado. Officials urge the public to wear repellant while outdoors and make sure their pets are vaccinated.